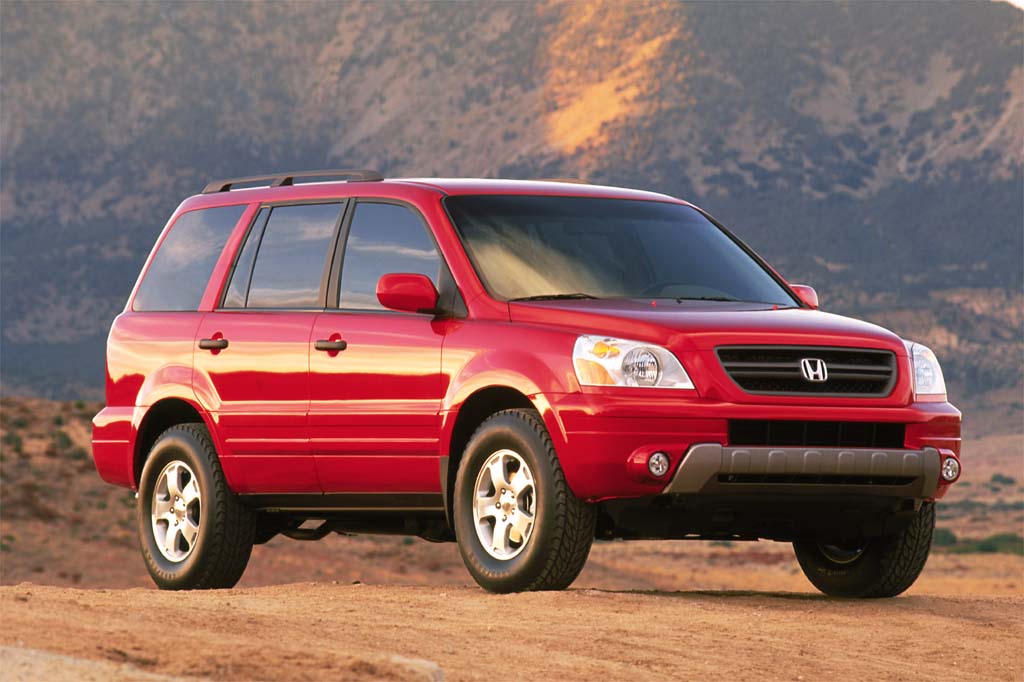 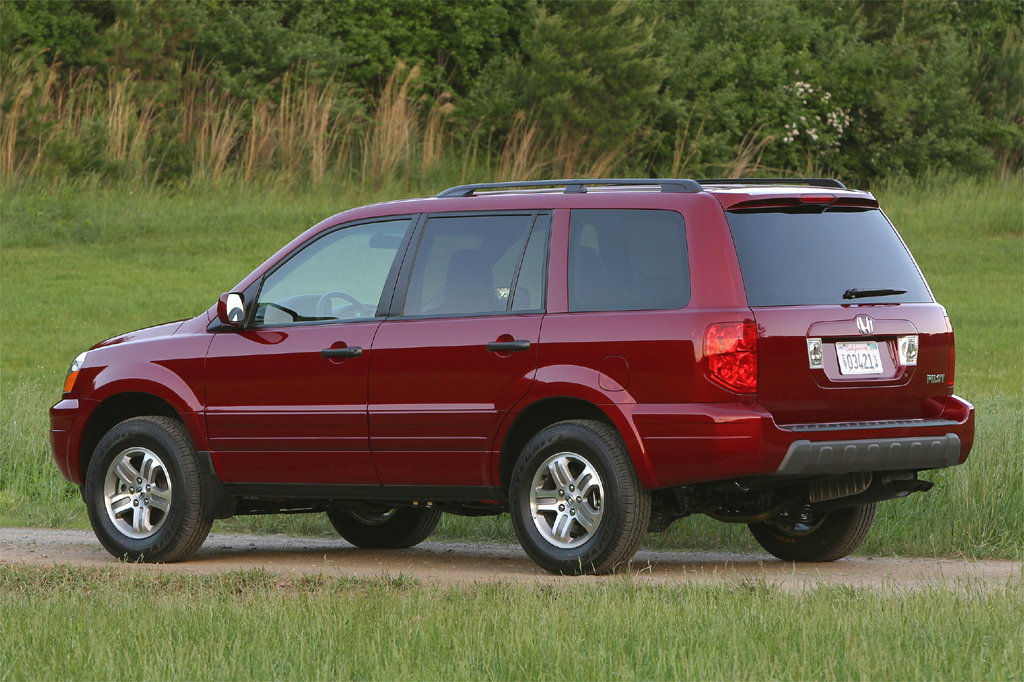 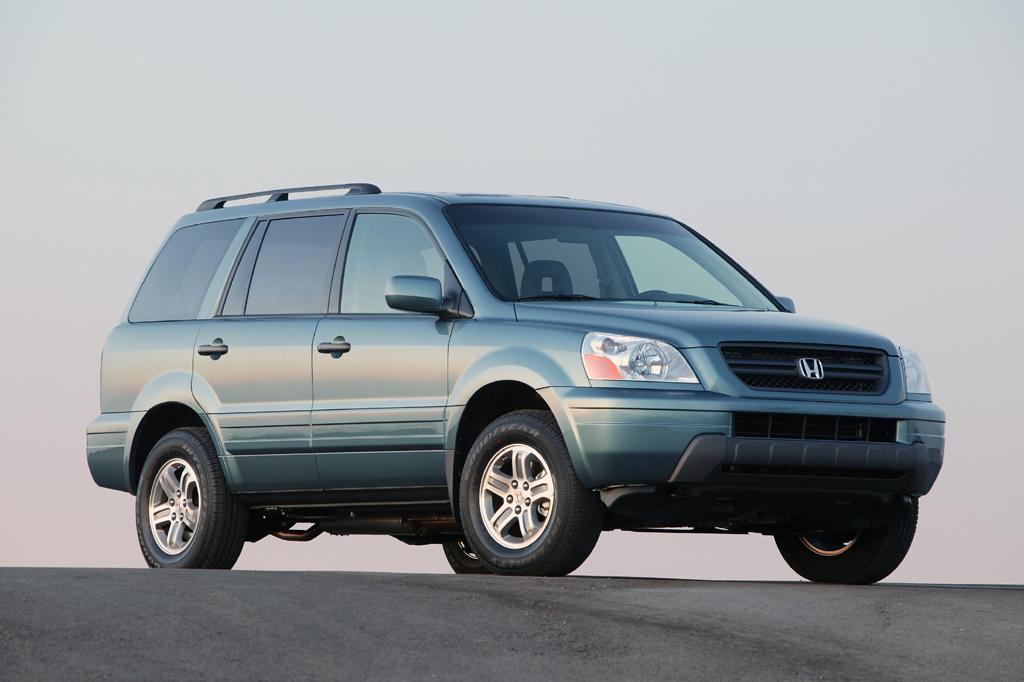 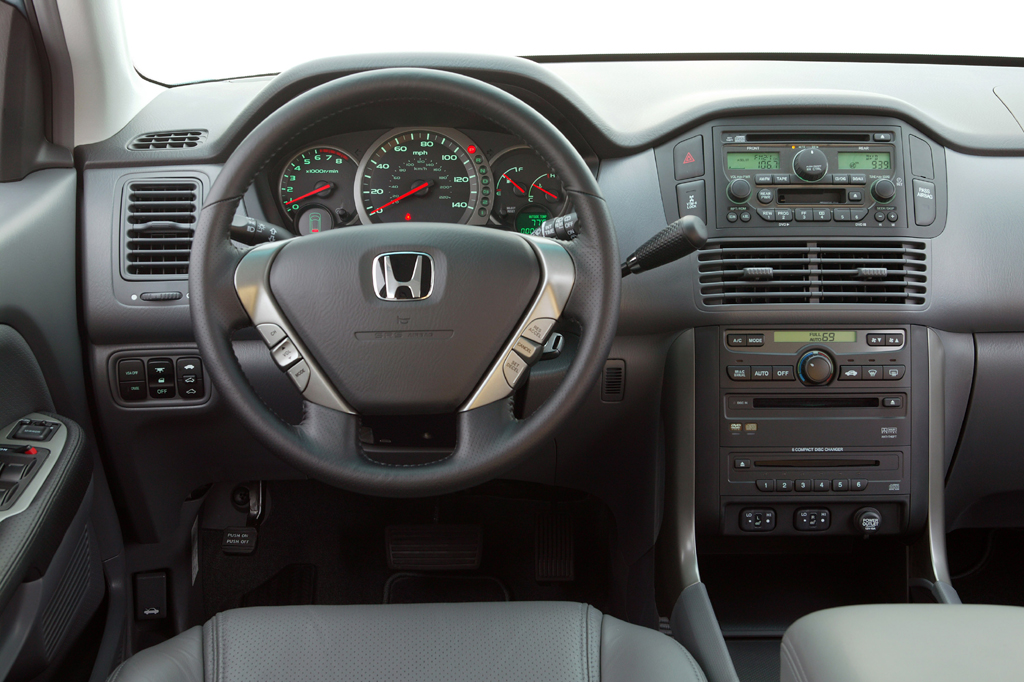 Pleasantly practical and family-friendly, Honda’s midsize SUV ranks as the Accord of its class. Delivering a laudable balance of civility and comfort, refinement and power, it serves as a highly rational approach to the way most people really use their SUVs. Toss in Honda’s strong reputation for reliability, and it’s no wonder that the Pilots is an authentic Best Buy–though lack of curtain airbags disappoints. High resale values translates to hefty used-SUV prices, however.

Honda borrowed the basic design of the popular MDX from its upscale Acura division, and transformed it into a new midsize SUV. The 2003 Pilot shared its basic chassis and powertrain with the more costly Acura MDX, and used the same V6 engine, five-speed automatic transmission, and all-wheel-drive system. Built on the same wheelbase as the MDX, but a bit shorter overall, the Pilot had different styling and softer suspension tuning. It was also slightly taller and wider.

Unlike the seven-passenger MDX, Honda’s Pilot could seat eight and had 16-inch wheels instead of 17s. Honda’s version had 8.8 cubic feet more cargo space.

Models included the basic LX and a pair of upscale versions: EX and leather-upholstered EX-L. All Pilots had antilock four-wheel disc brakes and front side airbags. Rear or curtain side airbags were unavailable.

Optional on the EX-L were a navigation system and rear DVD entertainment, although they were not available together. Rivals included the Ford Explorer, Nissan Murano, and Toyota Highlander.

Only one powertrain has been available for the Pilot: a 3.5-liter overhead-cam V6 engine, driving a five-speed automatic transmission. Every Pilot is equipped with all-wheel drive. For 2005, the V6 rose from 240 to 255 horsepower.

Able to deliver strong, ready power, the Pilot is among the quicker midsize SUVs. It’s especially robust for highway merging and passing. A test EX was able to reach 60 mph in 7.9 seconds. That compares to 8.4 seconds for a V8 Ford Explorer, and 8.5 for an AWD V6 Toyota Highlander. Adding to the powertrain’s exemplary behavior, the transmission shifts smoothly and promptly.

An EX averaged 16.5 mpg overall, and 19.7 mpg in mostly highway travel. An EX-L model yielded 16.4 mpg in mixed driving. These figures compare to a Highlander, though Honda recommends regular-grade fuel for the Pilot, while Toyota recommends premium for V6 Highlanders.

Few SUVs absorb bumps as well as a Pilot, which copes comfortably with most any surface. Although the body floats a bit over big bumps and dips, and takes a moment to settle, it never loses composure. Cracks and patchy pavement pass with little impact or notice. All told, the ride is softer than that of an MDX.

Refined as any rival, this SUV is quieter and more solid than most. Coarse-pavement tire thrum and highway wind noise are moderate at worst, the V6 never rises above a muted growl, and there’s only slight body drumming over washboard roads and lane-divider dots. In addition to a generally carlike driving feel, the Pilot offers fine low-speed maneuverability and a city-friendly turning radious.

Instruments and controls are satisfying, though digital readouts for the odometer/outside-temperature display and the rear-differential lock wash out in some light conditions or through polarized sunglasses. The steering-column-mounted transmission-shift lever does not block access to any control, but its travel is imprecise enough to regularly overshoot the Drive position. Honda’s navigation system is easier to learn and use than most, but the screen is small and the driver must stretch to reach the main control. Cabin finish is thorough, and materials are solid and harmonious, but hard plastic surfaces abound.

Providing generous front headroom, the seats are supportive and comfortable, though not exceptionally so. Taller drivers might crave more rearward seat travel and a steering wheel that tilts higher. Shorter drivers could find the thigh bolstering too prominent. Thick front roof pillars block the driver’s view to some angles, but large windows and a typically-tall SUV driving stance translate to good visibility otherwise. Trucklike ride height requires most occupants to hoist themselves aboard with some effort.

The second-row bench offers good room and comfort for two adults, or three in a pinch, but some competitors offer more usable legroom when a front seat is pushed back. Toyota’s Highlander has lower step-in and, thus, easier entry/exit. The third row is tough to access and sized mostly for youngsters, though even they have little leg space.

Ample load volume emerges when some seatbacks are folded down, though usable space is little (if any) greater than in a Highlander or regular-length Chevrolet TrailBlazer. You must remove and stow the third-row headrests in a lidded floor well to fold the rearmost seatback, but second- and third-row seats drop easily to form a flat deck and some rear shoulder belts detach for cargo-carrying convenience. Lack of separate-opening liftgate glass is a disappointment. Bins and cubbies abound, including two-tier front seatback pouches.