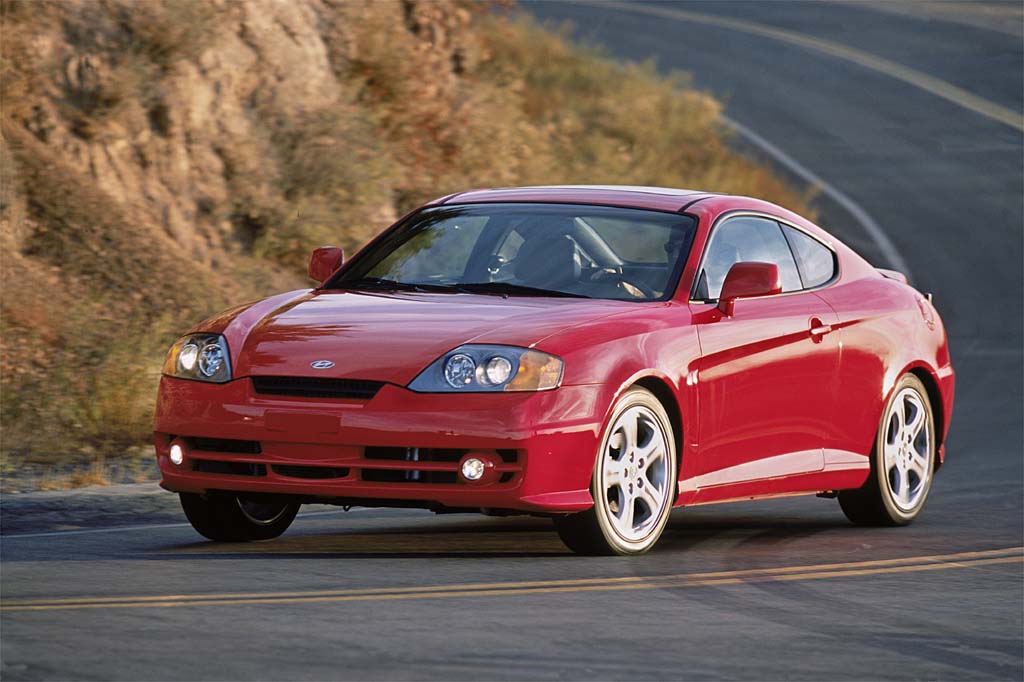 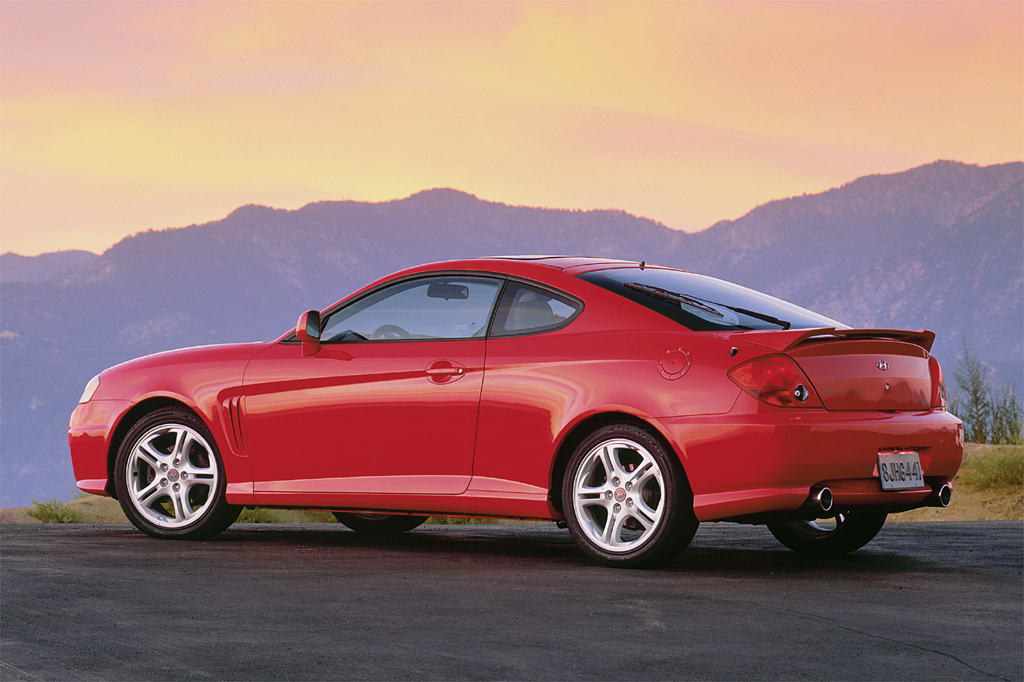 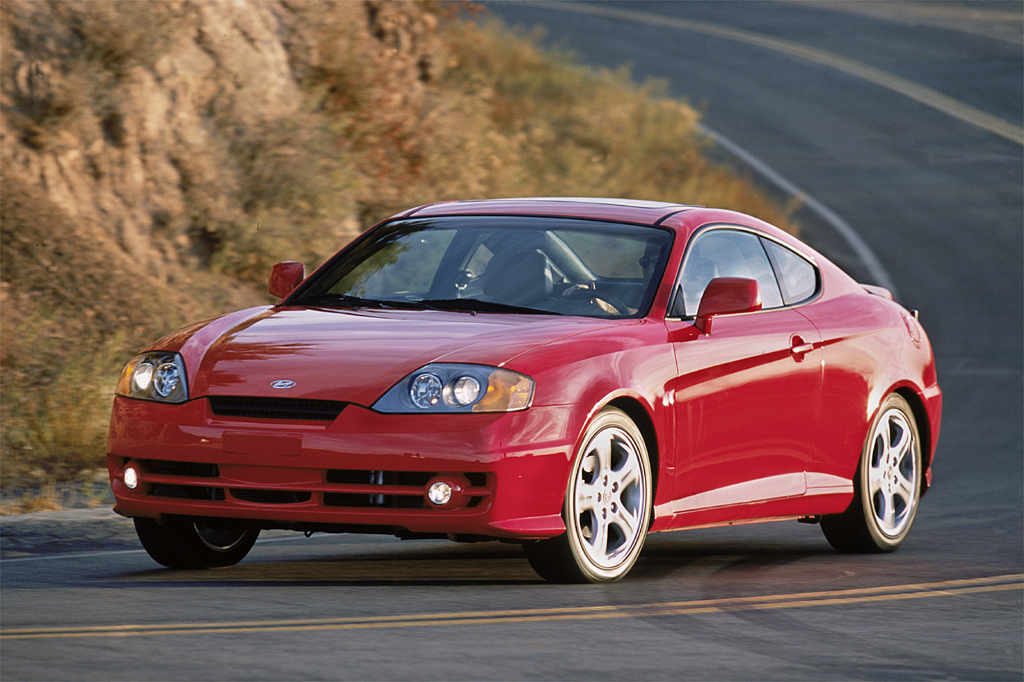 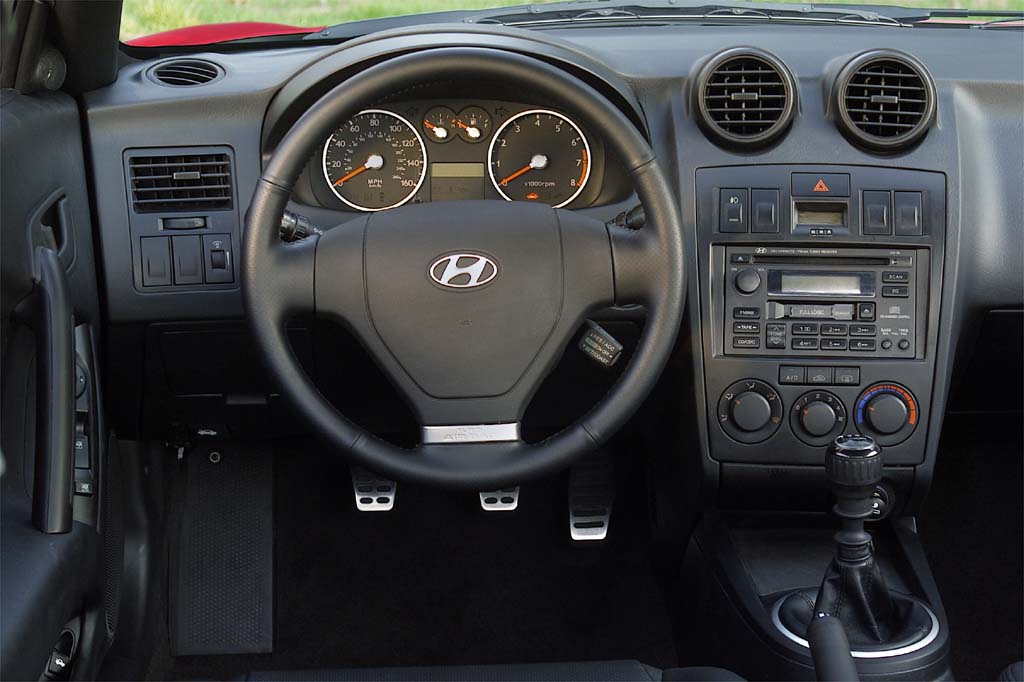 It’s not that quick, refined, or practical, but the Tiburon is a credible effort that’s fun to drive. Depreciation tends to be steep, which keeps used-car prices down. Backed by a long warranty, a fully-equipped V6 could be a tempting choice for the budget-conscious sporty-compact crowd.

Hyundai, a fast-growing South Korean automaker, redesigned its sporty front-drive hatchback coupe for 2003, giving it larger dimensions, new styling, and a V6 engine. Tiburon’s wheelbase and overall length grew slightly compared to the previous version, and curb weight increased by about 200 pounds. The previous-generation Tiburon expired after 2001, and there was no 2002 version.

Base and GT V6 models were offered, both with standard front side airbags and optional antilock braking. Base Tiburons retained a 2.0-liter four-cylinder engine. GT V6 coupes got the 2.7-liter V6 that was used in Hyundai’s Santa Fe SUV and Sonata sedan. A five-speed manual transmission was standard, and a four-speed automatic was optional. The automatic unit had a manual shift gate. Also optional on the GT V6 was a six-speed manual gearbox.

Base models rode on 16-inch tires, versus 17-inch for the GT V6. Both had standard four-wheel disc brakes. Traction control was not available, but a sunroof was optional. Leather upholstery was standard in the GT V6, which could also have a rear spoiler and aluminum pedals.

Hyundai had one of the industry’s longest new-car warranties. Rivals included the Acura RSX, Toyota Celica, and Mini Cooper.

n the base/GS coupe, Hyundai’s dual-overhead-cam four-cylinder engine developed up to 138 horsepower. The GT coupe (and later SE) held a 2.7-liter V6 engine that could produce 172 horsepower. A five-speed manual transmission was standard in base/GS coupes, while the 2003-04 GT used a six-speed. A four-speed automatic transmission has been optional for all models except for the 2005 SE, which came only with a six-speed manual transmission.

Performance depends on the powertrain. A GT V6 with manual shift feels peppy with lots of shifting. A six-speed model accelerated to 60 mph in 7.7 seconds, but shifter and clutch action are imprecise. Hyundai claimed an 8.2-second time with an automatic transmission, which saps some midrange punch but compensates with its manual shift gate. Still, Tiburon is a relatively heavy small coupe, and this V6 isn’t sufficiently potent for its size.

Capable in most situations, the Tiburon functions with good grip and only moderate body lean. Steering is a bit light and the nose plows in very fast, sharp turns, but high-speed maneuvering is predictable and fun. Braking is strong and stable with ABS installed, but a non-ABS example needed a gentle right foot to avoid early, sudden front-wheel lockup in simulated emergency stops, and its brakes felt touchy even in routine use.

The dashboard is needlessly stylized, but gauges and most controls are within easy view and reach. Some drivers might find that the manual shift lever is too far back for easiest access to some gears. Cabin materials are not top-grade, but not cheap-looking either. The instrument panel’s seven blank switchplates are eyesores, though.

Low-slung front seats make entry/exit feel like a chore. Once you’re seated, the cabin design imparts a closed-in feel–almost like sitting in a bathtub. Still, even six-footers should be comfortable, though the sunroof limits head clearance and seats could benefit from greater lumbar support. Rear visibility is hampered by thick roof pillars and a sloping rear window.

Only youngsters fit in back. Folks over five-feet-six might bang their heads against the roof or rear window–as a sticker inside the hatch lid warns. Entry/exit is difficult, too.

Hatchback design and a standard split-fold rear seat are practical, but the available subwoofer (if installed) steals cargo space. Small-items storage is okay, but many rivals do better.