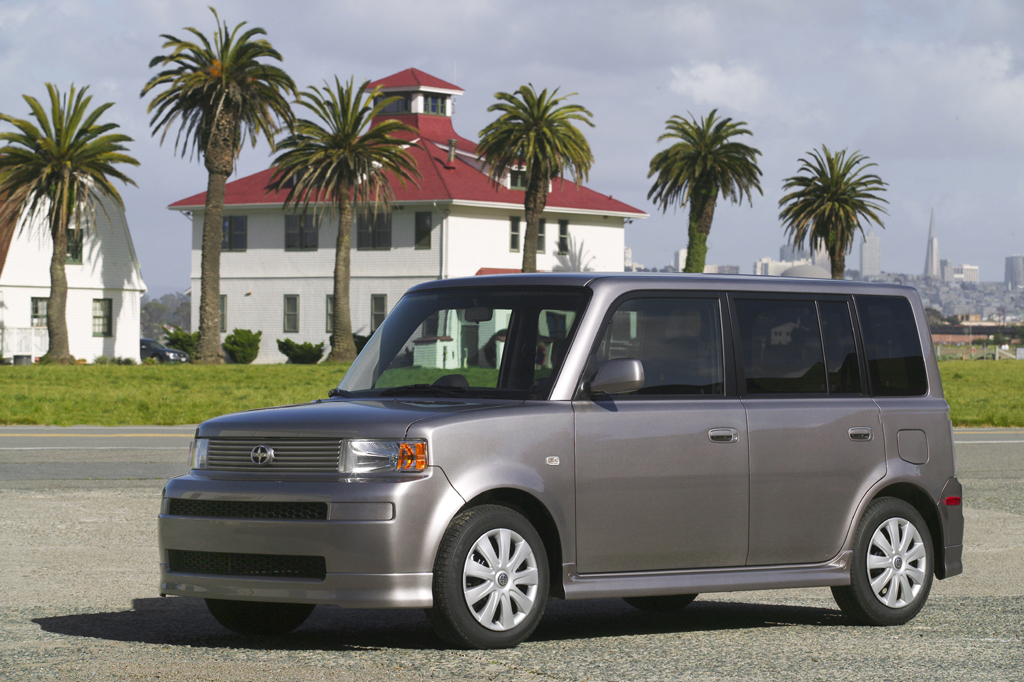 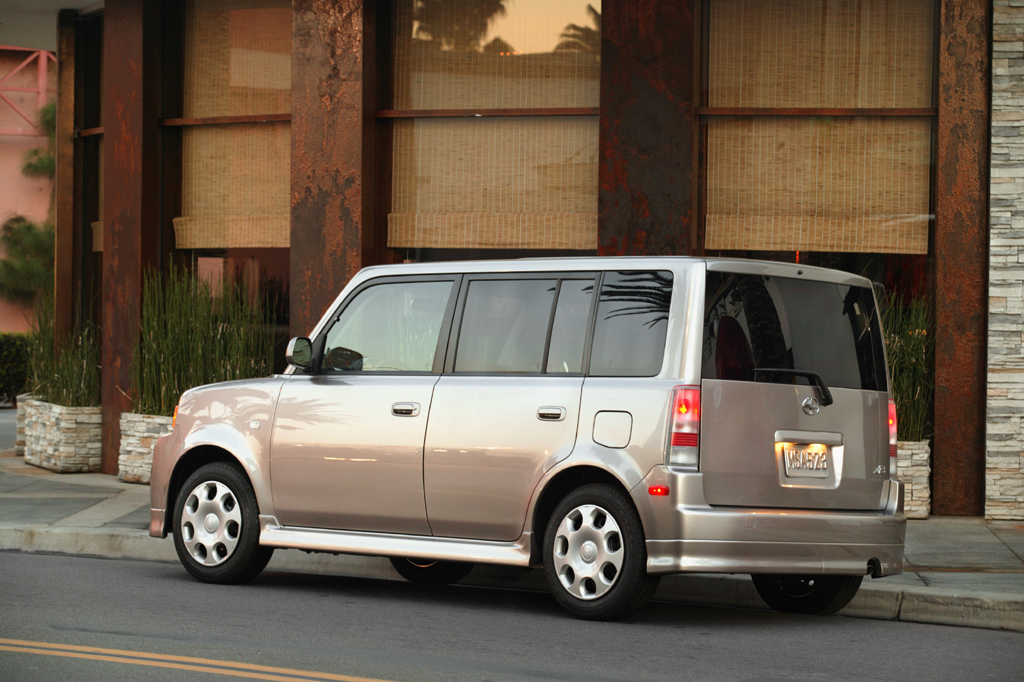 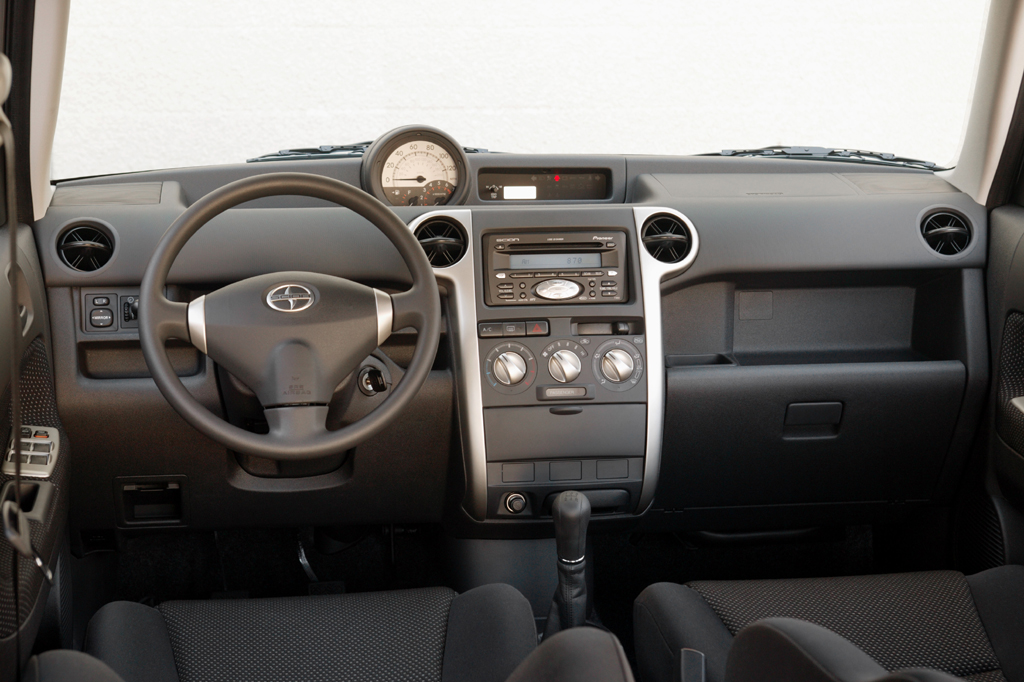 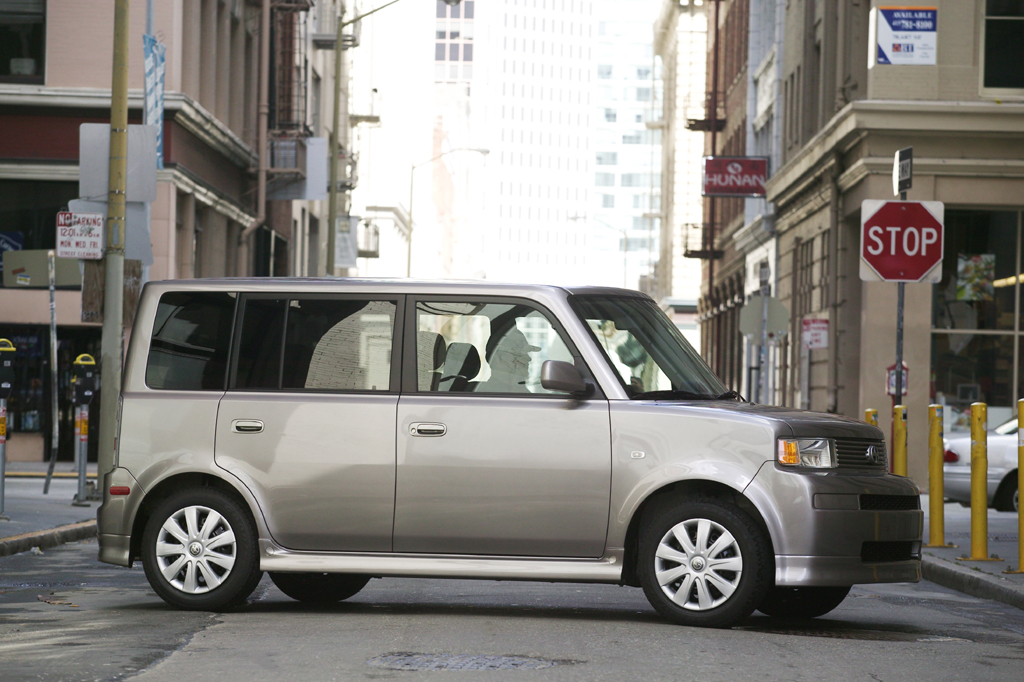 The xB melds hip-hop style with box-on-wheels practicality in a solid, pleasant little wagon with the bonus of Toyota’s reputation for reliability, durability and quality workmanship. As such, this Scion appeals as much to older folks as to the young trendsetters it was designed for, an irony that also applies to the Honda Element and other similarly calculated “lifestyle” wagons.

This square-lined 5-door wagon launched Toyota’s youth-oriented Scion brand for model-year 2004 together with the xA 4-door hatchback. Both were five-passenger compacts sharing a basic platform, a 108-hp 1.5-liter 4-cyl engine, 5-speed manual transmission and optional 4-speed automatic. The main differences were external. Where the xA had conventional small-car styling, the xB was a literal “two box” design standing longer and taller on a 5-inch longer wheelbase.

With its unusual appearance and wagon versatility, the xB symbolized Scion’s mission of drawing younger, “active lifestyle” buyers to Toyota dealers with “cool” vehicles that would presumably keep these customers coming back to Toyota. Marketers decided this group wanted affordable compacts they could easily personalize, so Toyota/Scion dealers stocked a wide range of performance and dressup accessories, which only added to dealer profits. Even so, the xB was no “stripper,” arriving at around $14,000 with two major safety features: antilock brakes and traction/antiskid control. Unlike the xA, though, it was not available with front torso side airbags or curtain side airbags. Other xB standards included air conditioning, power windows/mirrors/door locks, tilt steering wheel, split folding rear seat, rear liftgate wiper, dark-tint rear privacy glass, and a good-sounding single-disc CD audio system with MP3 playback. Regular” factory options included satellite radio, fog lights, rear spoiler, alloy wheels to replace the standard 15-inch steel rims, and upgraded sound systems from various brands well known to the youth market.

Helped by its funky image and wide press attention, the xB promptly outsold the xA by some 2 to 1 in Scion’s first two seasons. Still, not many used Scions of any kind are yet on the market. It’s worth noting that Toyota’s slightly larger Echo sedan was a kissin’ cousin of the inaugural Scions, using identical powertrains and the same basic platform. Echo, however, was one of Toyota’s rare sales duds, and was dropped after model-year 2005.

The xB was offered only with a 1.5-liter 4-cyl. engine and a 5-speed manual transmission or an optional 4-speed automatic. Horsepower was listed at 108 for 2004-05, then restated to 103 for 2006 models, due to a change in rating method; the engine itself, however, was unchanged.

The xB is more about turning heads than neck-snapping performance, so acceleration is sedate. A manual-transmission test car clocked 9.8 sec 0-60 mph, and automatic transmission adds a second or so. With that, xB drivers must plan ahead when merging onto fast-moving expressways, passing on crowded two-lane roads, and even making turns against fast oncoming city traffic. Still, the little box doesn’t feel that slow, and both transmissions are slick and responsive enough. But because it is somewhat underpowered, the xB isn’t as economical as some small cars. We averaged 24.6 mpg with manual transmission in a test that included gas-eating acceleration runs; a test automatic version averaged 26.3 mpg in a less-strenuous city/highway mix.

Road manners are typical small wagon. Body lean seems marked in tight fast corners, a function of the car’s elevated seating, and the skinny tires both limit grip and allow mild wander along road grooves and in gusty crosswinds. Otherwise, the xB feels stable yet nimble. It really shines in the urban crush with its tidy size, compact turning circle and quick, low-effort steering. The standard ABS gives competent routine stops, but distances were a bit long in our simulated 60-0 “panic stop” test. Ride comfort is average with standard-size tires. Washboard surfaces induce minor jiggle, especially at freeeway speeds, and there’s occasional bucking over sharp bumps and big humps. Beware of used examples modified with larger wheels or non-standard suspension components, as your teeth will likely rattle except on the glassiest pavement. Noise levels are class-typical, with noticeable engine roar at full throttle, about equal parts engine and tire hum in gentle cruising. Wind rush, though, is surprisingly modest for such a bluff box.

But a box is a practical shape, so the xB has fine interior space for its exterior size. Despite sitting fairly high off the floor, all occupants enjoy near top-hat head room and plenty of leg space, plus airy views out and no-strain entry/exit. Seats are comfortable for the economy class, but the rear bench is too narrow for three adults. As in the sister xA, gauges and warning lights sit in a dashtop pod that puts style over function, though it’s livable. At least the audio unit is handy just right of the steering wheel. The climate panel is directly below. Both have large, simple controls. Assembly and cabin materials are more than up to the price, and the cloth trim is quite classy, but available LED lighting for the front floorwells and even cupholders may seem like overkill to over-30s. Buyers of all ages will appreciate the usefully cubic cargo hold, easy-fold rear seats and large liftgate opening. Still, this is no minivan, with just 21 inches of floor length behind the rear seat and 43.4 cu. ft. maximum load volume, though most all that space is useable. Interior torage includes a small well next to the spare tire beneath the cargo floor and assorted slots and pockets up front, but rear-seaters get nothing.