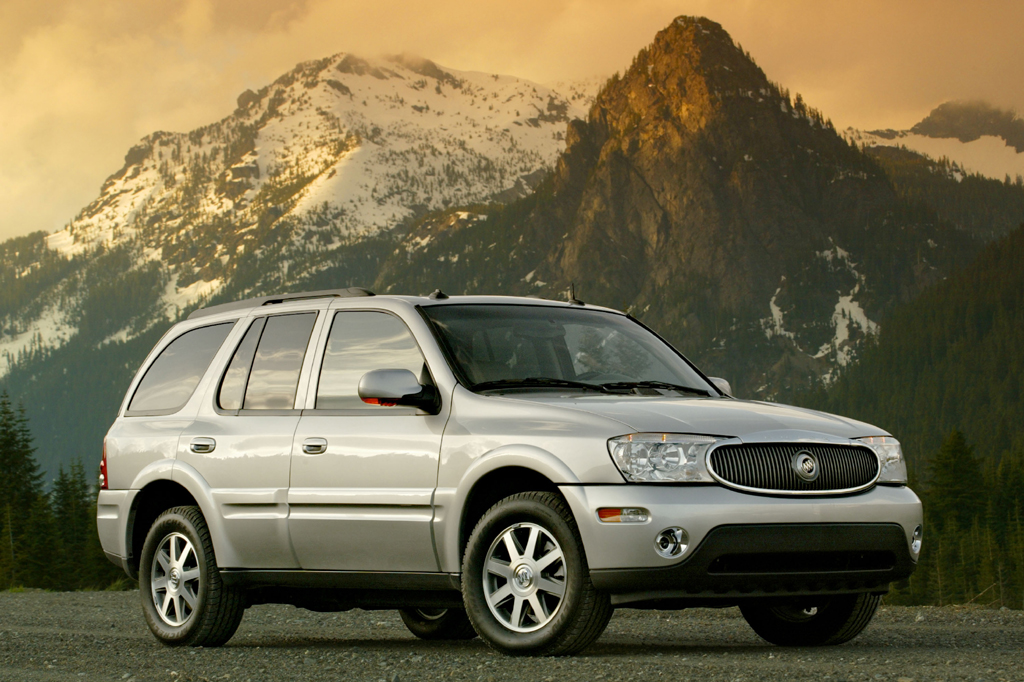 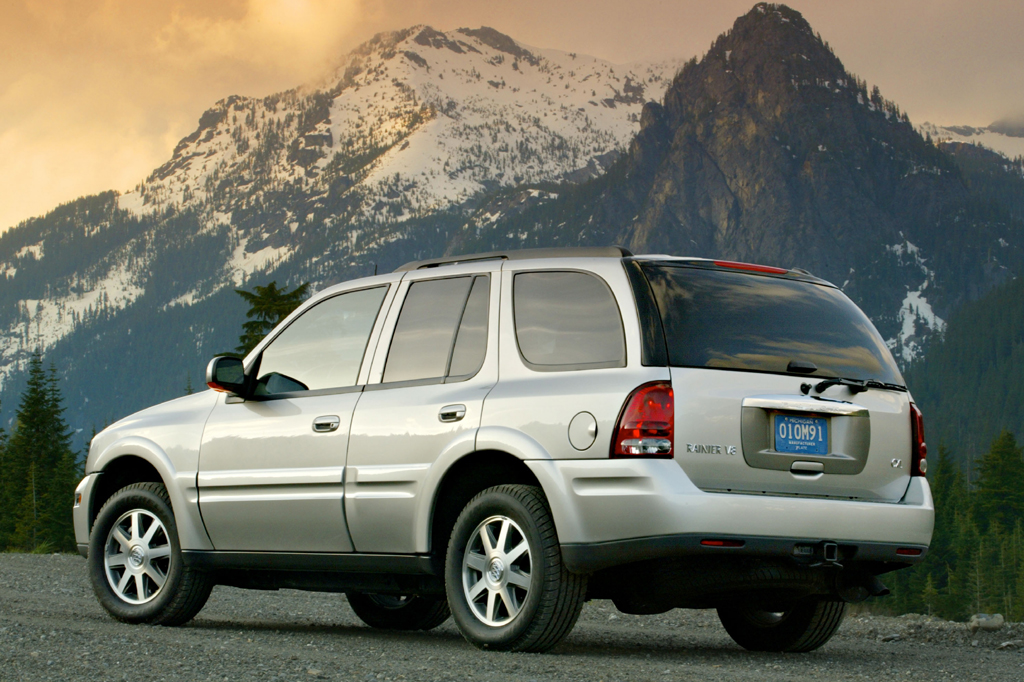 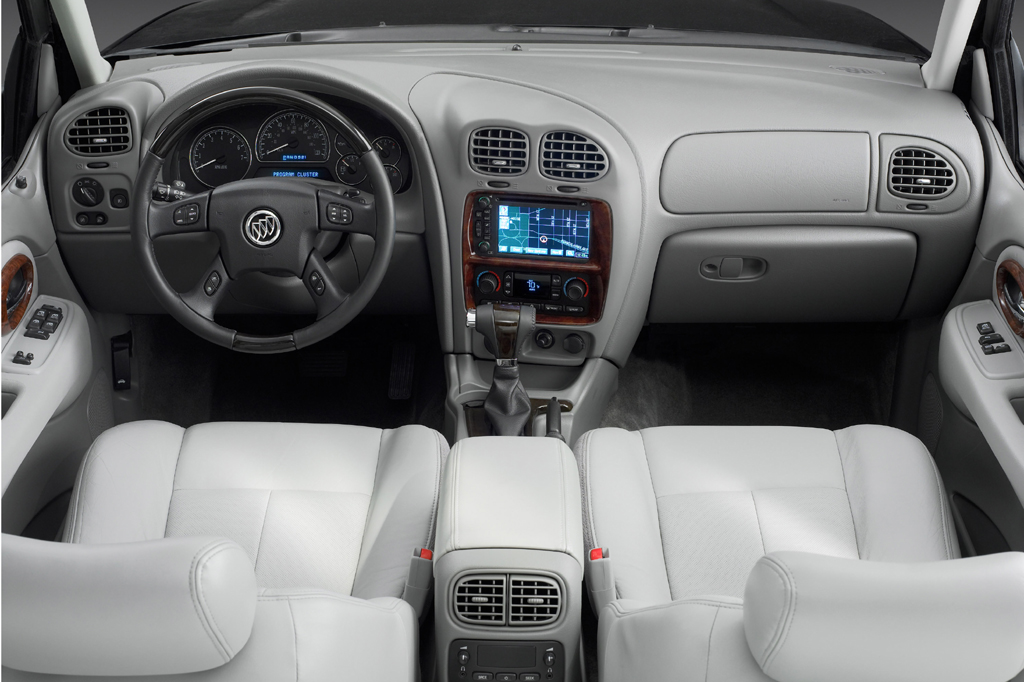 As the Bravada retired at the end of the 2004 model year, Buick adopted its position as GM’s upscale midsize SUV. Rainier remained alone among SUVs in offering V8 power in the regular-length body, an advantage that helped it compete against luxury-oriented midsize SUVs. Still, it cannot match the best import competitors for overall refinement, materials quality, or prestige. Rainiers cost more than their GM siblings when new, and cannot escape the fault common to their noncar-based design: indifferent handling and mediocre fuel economy. On the other hand, Rainier is the quietest and best-riding of the GM bunch.

Buick added a new model for 2004: a midsize sport-utility vehicle that shared its basic design with the Chevrolet TrailBlazer, GMC Envoy, Oldsmobile Bravada, and Isuzu Ascender. TrailBlazer and Envoy offered both a 5-passenger regular-length version and 7-seat extended-length model. Rainier came only as a regular-length 5-seater.

A six-cylinder engine was standard, with V8 power optional, making Rainier GM’s only midsize regular-length SUV to offer a V8. A four-speed automatic was the sole transmission. Rainiers could have rear-wheel drive with traction control, or all-wheel drive that did not include low-range gearing.

With a six-cylinder engine, Rainier delivers good acceleration off the line for brisk takeoffs, as well as adequate passing power. A V8 Rainier feels measurably stronger on both counts. Buick’s Rainier and the equivalent Oldsmobile Bravada have averaged 12.7 to 17.4 mpg with a six-cylinder engine. A V8 Rainier averaged 14.8 mpg in a mix of city/highway driving. With its new fuel-saving technology, the 2006 V8 gets the same 15/21-mpg EPA fuel-economy estimate as the six-cylinder model. Both engines use regular-grade gasoline.

A rear air suspension, standard on Rainier, provides firm control without the rebounding that a coil-spring setup would suffer. During test drives, the Rainier’s tail sometimes has jolted or hopped when traversing pronounced bumps and sharp ridges.

The rear air suspension also accounts for better road manners and greater poise than GM’s coil-spring setups could provide. Even so, Rainier still exhibits typical truck-based-SUV behavior: slightly wobbly feel in quick changes of direction, plus mediocre cornering grip compared to a car. Steering feel is too light for stress-free control, though response is slightly sharper than on other GM SUVs. Rainier and Bravada (and later, the Saab 9-7X) were the only versions of the GM SUVs to offer all-wheel drive, so all-wheel traction is always available, but there’s no low-range gearing.

Rainiers have laminated glass for the windshield and front doors, plus other sound insulation denied their GM cousins. Expect noticeably less wind and road noise than most SUVs. Unlike the V8, the six-cylinder engine sounds gruff at full throttle.

Rainier exhibits a monotone color scheme for its dashboard design, which is otherwise the same as Bravada’s. Instruments are backed in silver rather than black. Interior materials and assembly fall short of similarly priced SUVs from Acura, Lexus, Infiniti, and Volkswagen. Most controls are clear and handy, though adjusting the low-mounted climate system demands a long look away from the road. Rainiers have been available with GM’s combination navigation/audio system, which is a relatively easy-to-use mating of map screen, navigation functions, and radio controls.

Good head and knee room also is offered in the back, along with adequate under-seat foot space–despite an uneven floorboard. The split bench seat is comfortable, fairly supportive, and wide enough for three friendly adults. Cargo space is acceptable with the rear seatback in place, and generous with it folded. The 60/40-split seatback folds easily with help from automatic-folding headrests. A high opening to liftgate glass hampers loading or unloading without using the full liftgate. Cabins boast a nice array of small-items storage space.