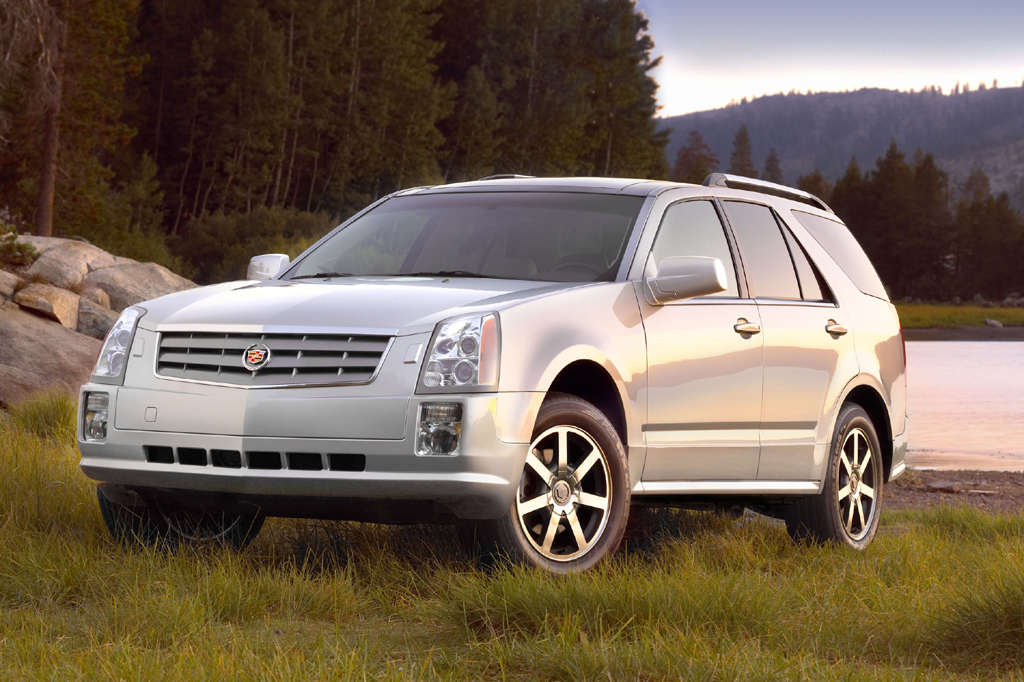 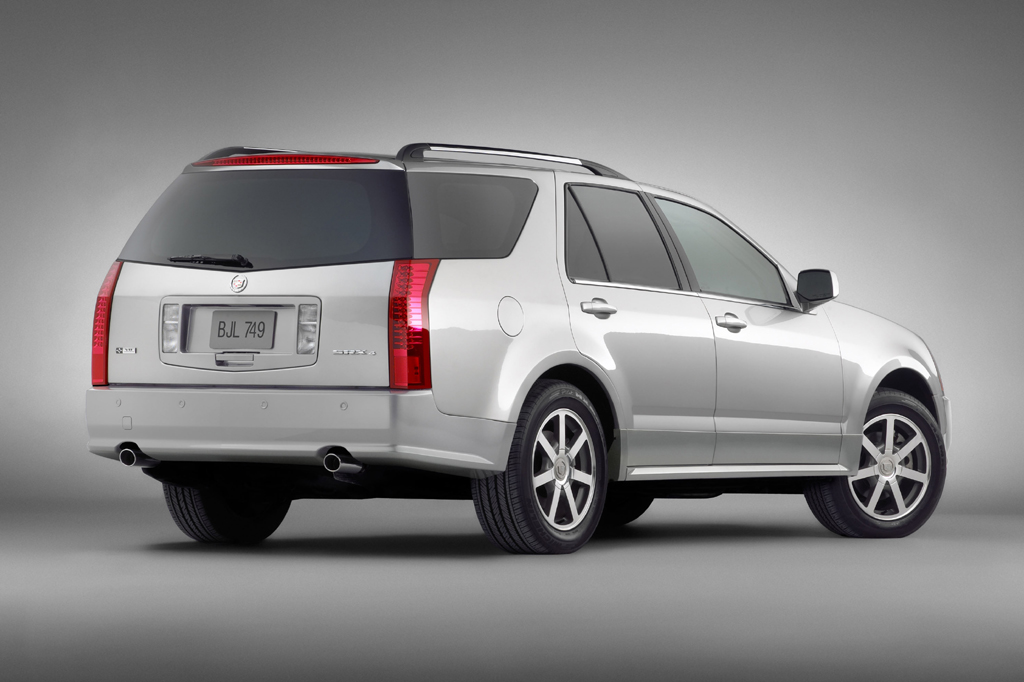 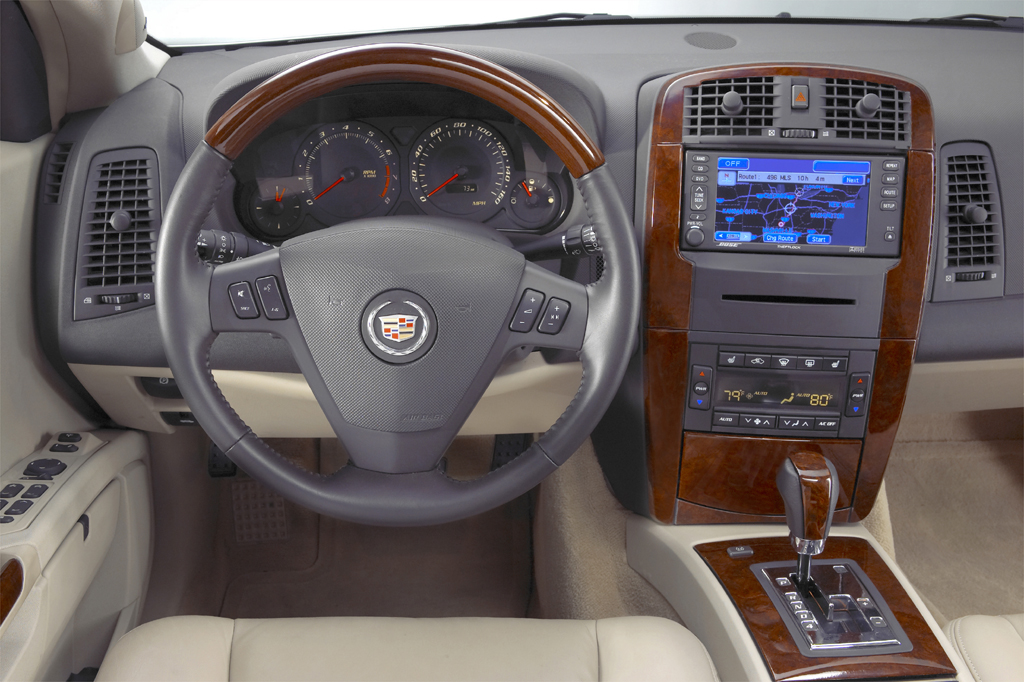 Unless you off-road or tow heavy loads, the SRX’s premium-car road manners and efficient packaging make it preferable to most truck-based luxury SUVs. Those attributes, combined with AWD security, also make it a thoughtful alternative to traditional luxury sedans. In performance, features, and accommodations–if not always in quality of cabin appointments–Cadillac’s SRX ranks among the best premium midsize SUVs in its price class.

Cadillac’s first car-based sport-utility vehicle offered V6 or V8 power, and carried up to seven passengers with an available third-row seat. SRX was taller than a passenger car, but not as high as a truck-based SUV. Rear-wheel drive was standard. Optional all-wheel drive did not include low-range gearing.

Available with either drive system was a 260-horsepower V6 or a 320-horsepower V8. The sole transmission was a five-speed automatic with a separate gate for manual shifting. ABS and traction control were standard. So were front side airbags and curtain side airbags for the first two seating rows.

Available in a package that included all-wheel drive was GM’s Magnetic Ride Control, which automatically adjusted suspension firmness based on the road surface. The V6 models used 17-inch wheels, versus 18-inch for V8s. Each SRX had a manual liftgate without a separate-opening window.

Leather upholstery was standard. The split folding second-row seat slid fore and aft 4 inches to adjust leg room. The optional two-passenger third-row seat was power-operated to fold down flush with the rear cargo floor. Available in its place was a compartmentalized storage bin.

Two engines are available in SRX wagons: a 260-horsepower 3.6-liter V6 and a 320-horsepower 4.6-liter V8. Each is mated to a five-speed automatic transmission.

Cadillac claimed 6.9-second 0-60 mph acceleration for an AWD V8 model. The V8 SRXs move briskly off the line, and, with help from the crisp-shifting transmission, respond willingly in highway passing and merging. However, they’re slow to respond to manual-mode selections. A V6 model with AWD did the 0-60 mph dash in 7.6 seconds, exhibiting fine movement away from a stop and in around-town traffic, but tepid response in high-speed highway passing maneuvers. Thus, the V8 has a tangible advantage only in highway passing, or when climbing long grades.

EPA gas-mileage estimates are similar to the truck-based V6 and V8 midsize SUVs. An AWD V6 model achieved 17.1 mpg in a city/highway mix, and 13.6 mpg in mostly city driving–including gas-eating performance tests. In mixed driving, a V8 AWD model averaged 15 mpg. Cadillac recommends premium-grade fuel for the V8, and regular for the V6.

Cadillac’s SRX is among the best-riding SUVs of any stripe, but its suspension is not luxury-sedan absorbent. It rides firmly but soaks up routine bumps and potholes, and is reassuringly flat at highway speeds. However, the rear end, in particular, reacts abruptly to sharp bumps or cracks and peaked ridges. On the plus side, there’s little bob or wallow over highway crests and dips.

Handling ranks among the class leaders, if not up to BMW, Infiniti, or Porsche for quick, confident moves. Steering is precise and natural in feel, though some testers have declared it slow to react. Substantial weight and slightly elevated ride height contribute to some unwieldy sensations in fast maneuvers, but overall balance and grip in turns is good. Despite a spongy brake-pedal feel, the SRX delivers good stopping power.

Quietness is another virtue, with luxury-car quality isolation from road noise and mechanical ruckus. However, some testers claimed the V6 was too coarse in rapid acceleration. Slight wind rush around outside mirrors occurs at highway speed.

Angular, high-tech shapes dominate the dashboard, which features large, clear gauges. Most controls are easy to reach and understand, though the role of multifunction steering-wheel buttons is not always obvious. The driver must look toward the floor console to determine transmission gear position, because it’s displayed in main instrument pod only during manual-shift mode. Cadillac’s navigation system integrates some audio functions, complicating simple adjustments. Interior materials feel substantial, though some panels flex easily when pressed and some plastic storage-bin covers have a low-budget feel. Leather and wood (wood optional on V6) contribute to the upscale ambience. Assembly is mostly solid, though one test example suffered rattling second-row seats.

The second row is elevated slightly for “theater seating” feel, and slides fore/aft to create generous leg room. Head clearance is good even with a sunroof. Seats are nicely contoured, though bolstering of the second row’s right-side cushion squeezes that passenger. Wider doorways would aid entry/exit. The tough-to-access third row is best suited for occasional child use, though not as cramped as might be expected.

Cargo space is minimal with the third-row seat in position, but the power-fold feature is a useful, if slow-acting, convenience. The second row folds with moderate effort, and rests nearly flat. With both seats folded, overall cargo volume mimics a large station wagon rather than a tall, traditional SUV. The available triple-compartment rear storage bin is a useful feature. In-cabin storage is plentiful.