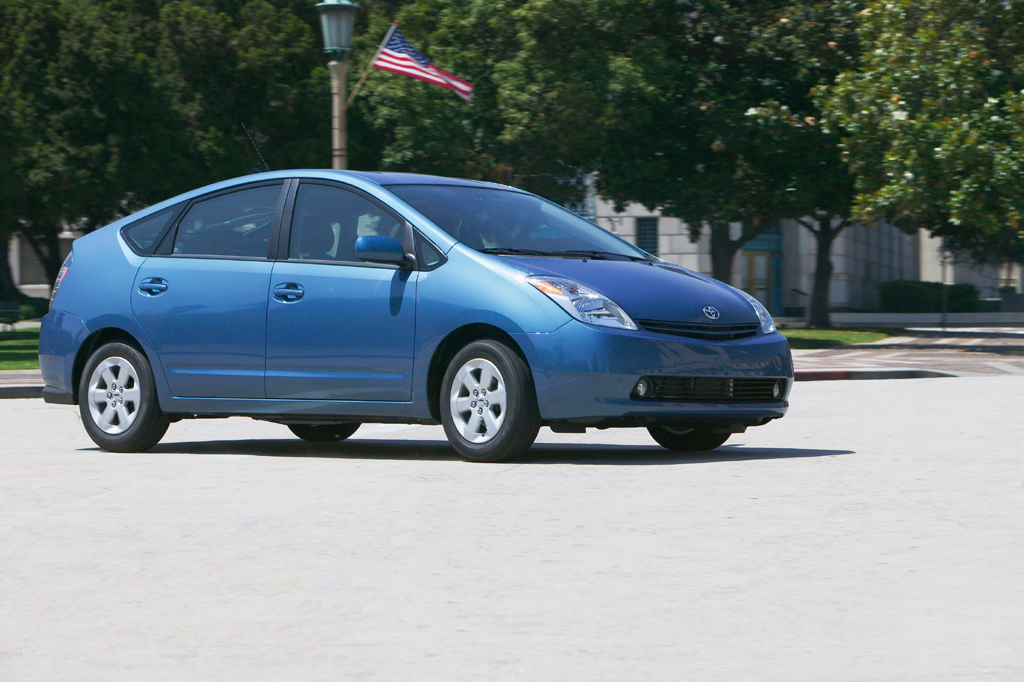 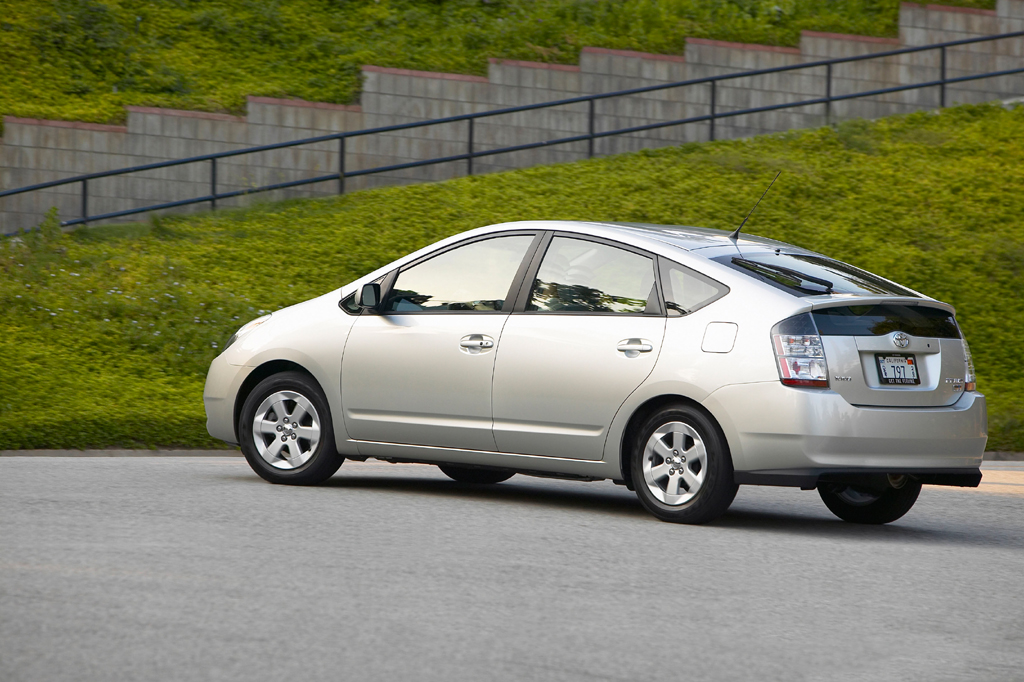 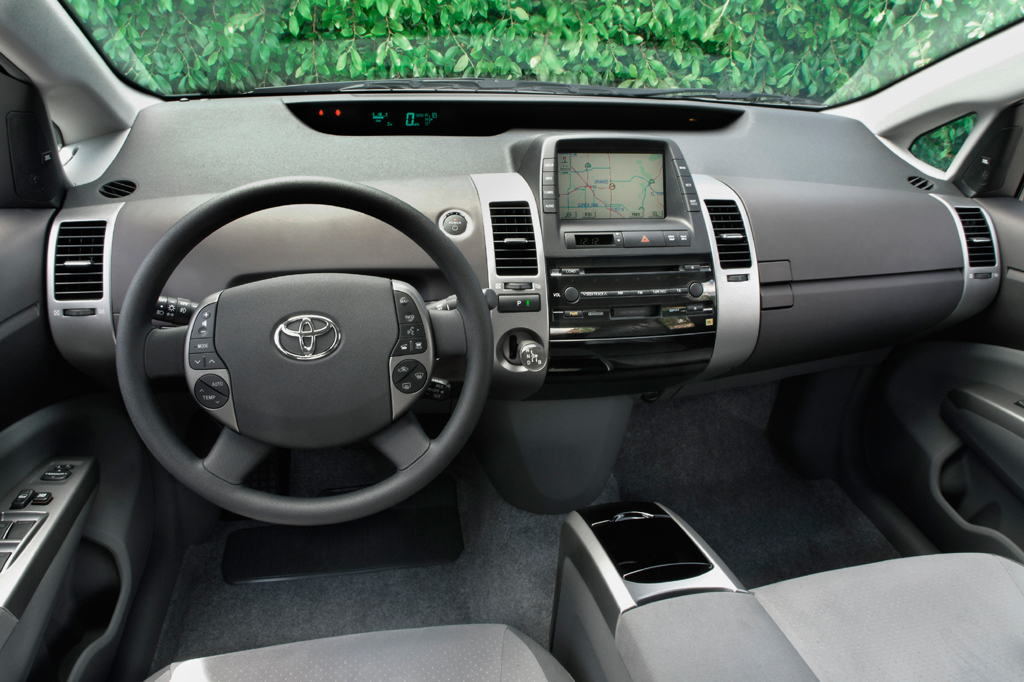 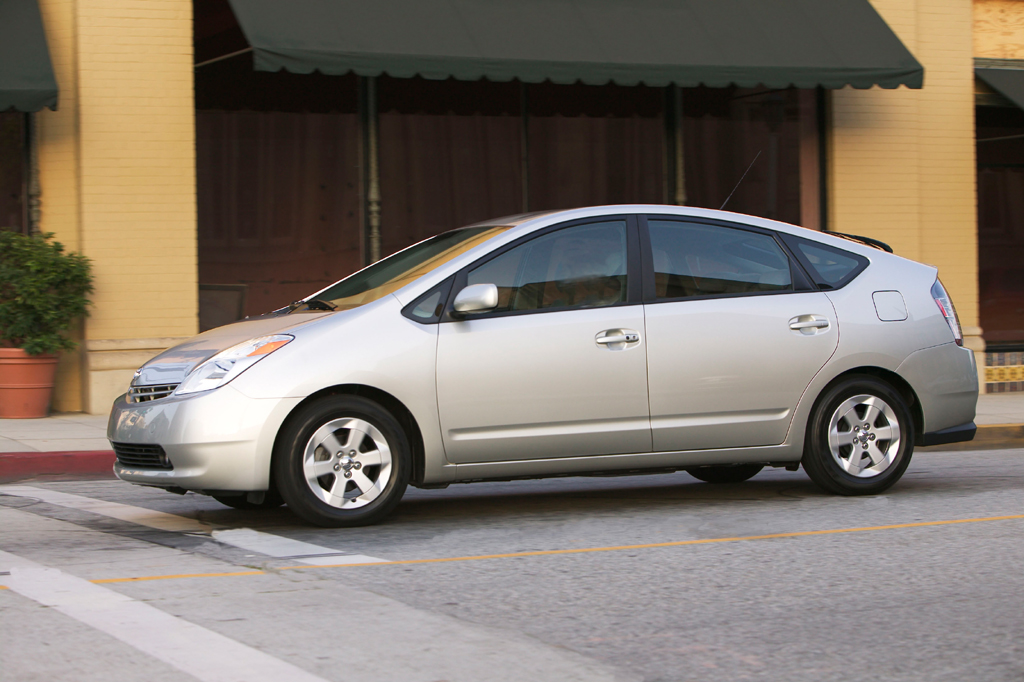 The Prius proves there’s more to “economy” than purchase price and miles per gallon. With the heated global-warming debate and record gas prices unlikely to ease, this hybrid should be as much in demand as a used car as it’s been on the new-car market. But its low emissions and high mpg may cost you more vs. conventional economy cars, especially given Toyota’s reputation for workmanship and reliability. Note, too, that this is a technically sophisticated machine that could cost a bundle to fix if something major goes wrong. And make no mistake: Electronics still can go wrong. With those caveats, the second-generation Prius is a pleasant and practical compact that lets you drive “green” with extra greenbacks in your pocket. You may never save enough in gas to offset its price premium and service costs, but you’ll love it every time you fill up.

The second gasoline/electric hybrid car on the U.S. market (after Honda’s Insight) was redesigned for 2004, growing in size, power and features, but not base price. Toyota morphed Prius from a 4-dr sedan to a sloped-roof 4-dr hatchback that added 6.9 inches in wheelbase, 6.3 in overall length, 1.2 inches in height and nearly 2 inches in width. Curb weight rose by some 125 lb. Though still classed as a compact, this larger new Prius rivaled Toyota’s midsize Camry sedan for passenger and cargo room, yet boasted some of the industry’s highest EPA fuel-economy ratings with estimates of no less than 60 mpg city, 55 highway.

As in the 2001-03 Prius, a 1.5-liter 4-cyl gasoline engine paired with a battery-driven electric motor to drive the front wheels through a continuously variable automatic transmission, or CVT. Depending on driving needs, the car used one or both power sources as directed by a powertrain computer, though it always moved off on electric power, with the gas engine cutting in around 20 mph or so. The system allowed the motor to act as generator for charging the battery pack, so no plugging-in was required. Like other CVTs, the Prius transmission dispensed with fixed gears to furnish a near-infinite number of drive ratios, again determined by the powertrain computer. New “by-wire” electronics replaced mechanical linkages for the accelerator and shift lever. Also aiding efficiency were a power-steering pump and air-conditioning compressor driven by electric motors instead of power-sapping engine-driven belts. Another new powertrain feature was a “hill acceleration control” designed to maintain a steady speed up and down steep slopes. The result of all this was a combined 133 peak horsepower.

Antilock brakes remained standard, joined by traction control and a newly optional antiskid system. Front side airbags and front/rear curtain side airbags were also available for the first time. Other new options included xenon headlamps and a “smart” keyless entry/engine-starting system with pocket transmitter. The optional navigation system added voice-command capability. As before, it operated from a central dashboard touch-screen that also governed various audio and climate controls. Continued were real-time screen displays for “power flow” and instant and average fuel economy.

For all the changes, Toyota held the Prius price line for 2004, claiming it could do so because it was finally making money on its hybrid car. (Many suspected Toyota had subsidized earlier models.) That plus the fresh design produced strong buyer demand, helped by Prius-owning Hollywood notables and other grandees who gave this hybrid high social status. Not surprisingly, Prius was soon in short supply, with long waiting lists and hefty dealer markups the rule. The situation continued into 2005, spurred by a midyear spike in gas prices and despite more cars being available for the U.S. market. Though several larger gas/electric cars were available by 2006-including a first-ever hybrid Camry sedan-Prius remained a hot seller as gas prices hit a record $3-plus, with $4 a gallon seemingly inevitable and imminent.

As before, Prius’ only competition as a compact hybrid car came from Honda: the two-seat Insight coupe and the larger, more-conventional Civic Hybrid sedan. Insight was dropped after 2006 due to waning sales, but the Civic loomed a stronger challenger that season, thanks to a redesign of its own. Yet for all the hype and hullabaloo, hybrid vehicles still account for only a small percentage of new-vehicle sales, and few have reached the secondhand market at this point. Hybrids do seem here to stay, but their ultimate impact is anything but clear.

The only powertrain comprised a 1.5-liter 4-cyl gasoline engine paired with a battery-driven electric motor. Combined net horsepower was initially stated as 133, but was restated to 110 for 2006 due to a change in rating method; the powertrain itself was unchanged.

We clocked a 2004 Prius at 10.5 sec 0-60 mph, slower than most conventional economy cars. Passing response is equally sluggish, and speed tails off rapidly up steep hills, but the car copes well enough with fast-moving metro traffic. Fuel economy is not as advertised-it never is with hybrids-but is terrific all the same. The worst we could do was 36.7 mpg with mostly aggressive city driving and gas-eating performance tests. Other test cars returned 42.6-45.2 mpg in more-restrained city/highway use, 41.7 mpg in mainly highway driving, figures reflecting the fact that hybrids are most efficient at city speeds. Part of that stems from a fuel-saving feature that shuts off the gas engine at stoplights, then restarts it on applying the throttle. There’s a slight shudder as the engine cuts in and out, but you get used to it. Not so the annoying surging and bogging we encountered in cruising conditions.

Just as it favors mileage over muscle, the Prius emphasizes ride comfort over road manners. The ride is supple and cushy, helped by the relatively long wheelbase, though there’s some float over large humps at highway speed. Handling suffers from the soft suspension and skinny, economy-biased tires. Cornering is safe and front-drive predictable, but it’s not much fun, with fairly marked body lean and limited grip. The skinny tires also compromise straightline stability, especially in crosswinds, and tend to follow road grooves. But none of this is alarming, and the car’s compact size and tight turning circle are great in the urban confines. Some of our testers, however, thought the electric steering a bit light and artificial-feeling. Stopping power is good, though brake-pedal action was unprogressive on a couple of test cars. Refinement is good by small-car standards. Wind and road noise are relatively modest. So is mechanical ruckus except at high rpm, where the Toyota engine is a bit gruffer and growlier than Honda’s 4-cyl in the Civic Hybrid.

As noted, this compact boasts midsize-car passenger and cargo room. Seats front and rear are class-typical for shape and padding, yet most of our staff found them long-haul comfortable. Tall occupants might wish for more seat travel in front and more head room in back, but the deficits are small. Entry/exit is easy, especially for a compact. Cabin décor is hi-tech without overdoing it. Plastics and fabrics are Toyota’s usual sturdy stuff. The hatchback design is equally practical. There’s 16.1 cu. ft. of cargo space with all hands aboard, and a standard 60/40 split folding rear seat opens up a good deal more. Alas, the sloped tail and high load floor preclude toting bulky stuff with the hatch closed, despite a large opening. Small-items storage is better than average, with twin dashboard gloveboxes, a roomy console bin, and an under-floor compartment in the cargo bay.

There’s a minivan feel behind the wheel, with a highish seat position, relatively vast dashtop, and a close-up view of the road through a steeply angled windshield. Still, some testers found the front pillars interfered with seeing around turns. Visibility to the sides is good, less so aft and over-the-shoulder, thanks to the sloping roof. Instruments and some controls continue the hi-tech theme. A digital speedometer, fuel gauge and transmission indicator sit directly ahead of the driver; they’re fairly distant, but easy enough to read. The multifunction touch screen is pretty intuitive, but readily picks up fingerprints and can wash out in direct sunlight. The available “smart entry” system with engine on/off button takes some learning, as does the odd action of the small shift lever sprouting from the dash.