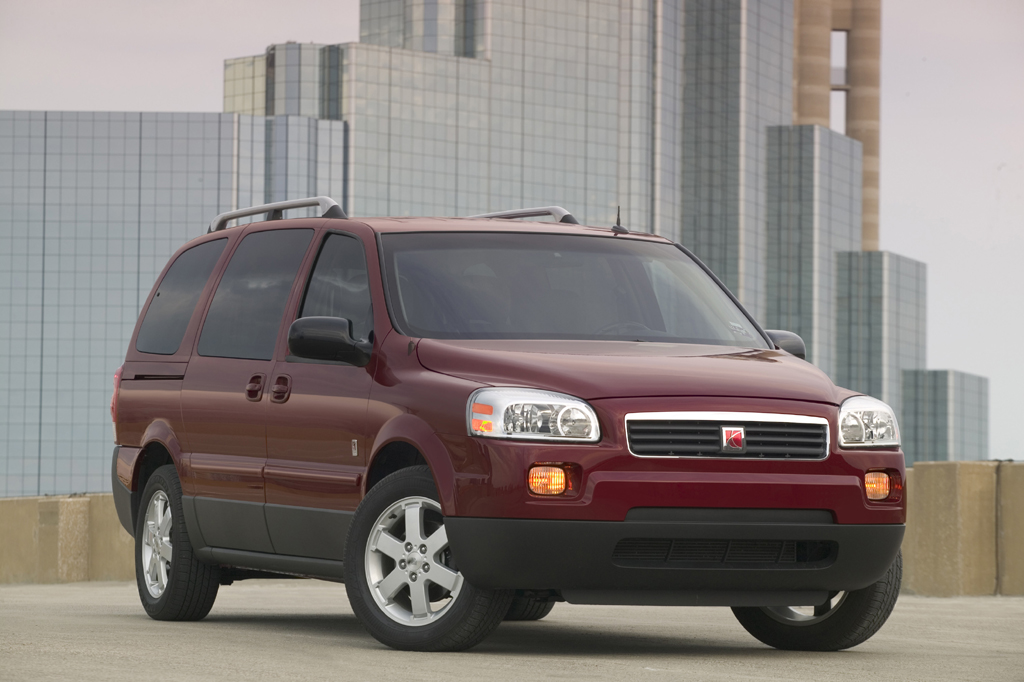 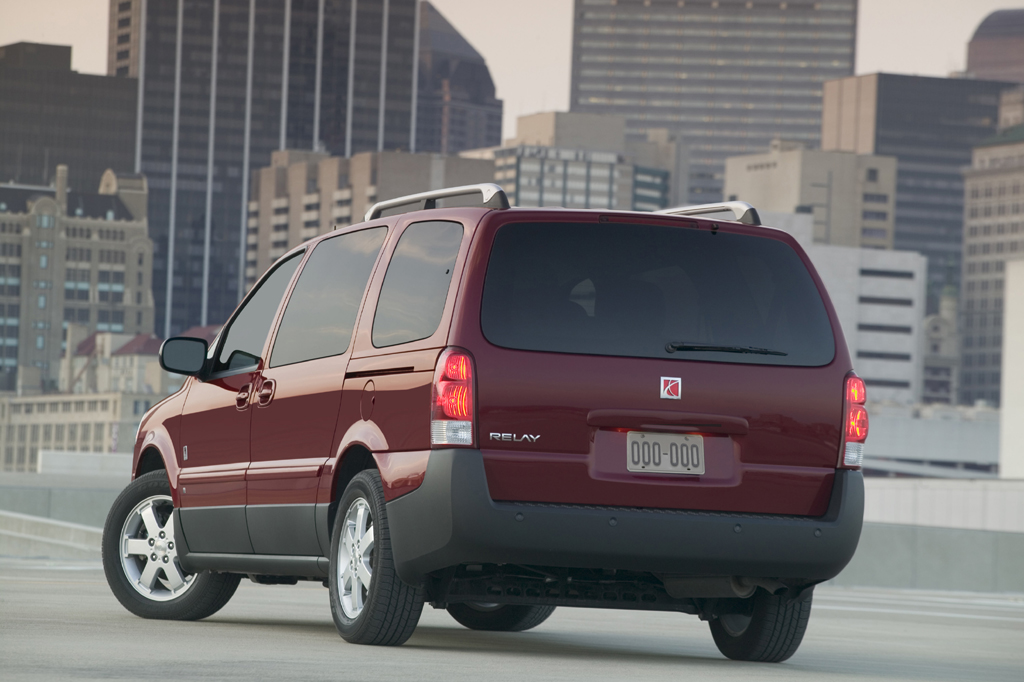 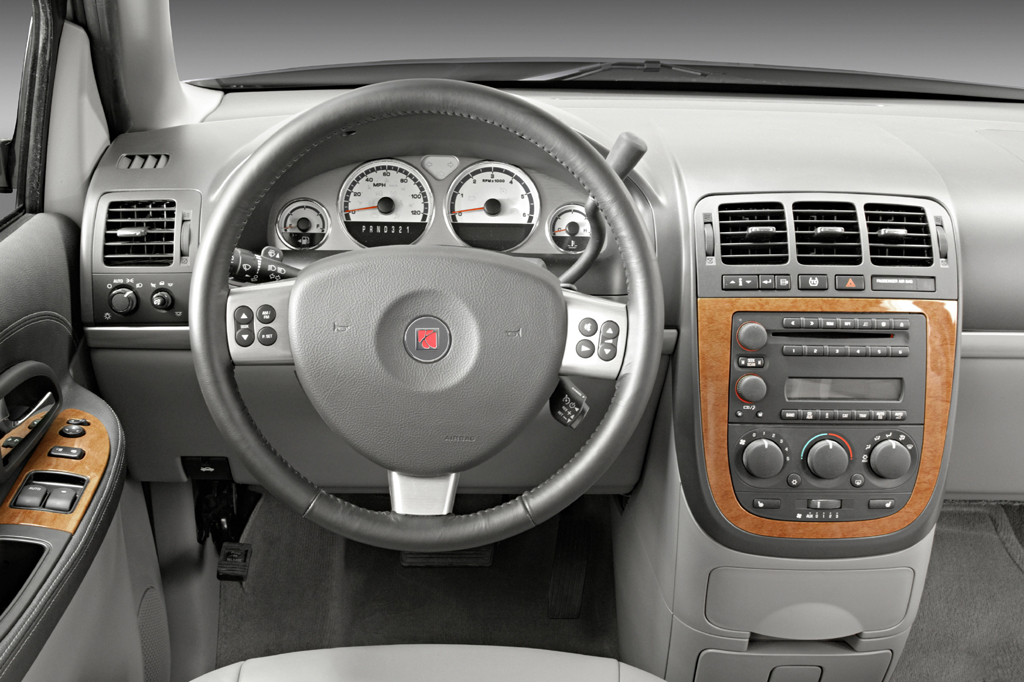 The lack of curtain side airbags is a big minus for safety-conscious buyers, and the rear seating rows and cargo area aren’t as convenient or as roomy as those in minivans from Chrysler, Honda, or Toyota. However, Relay’s comfortable ride, standard DVD entertainment, and available AWD make it worth a look.

The Saturn division of General Motors got its first minivan for 2005. Relay shared its basic design with the 2005 Buick Terraza, Chevrolet Uplander, and Pontiac Montana SV6. All basically added an SUV-style nose to the 1997-2004 GM minivan design to create what GM dubbed the “crossover sport van.” Relay came in trim levels labeled 2 and 3. There was one body length and seats for seven via folding/removable 2nd-row bucket seats and a 50/50 fold-flat 3rd-row bench. Power sliding side doors were available. Relay used a 200-hp V6 and 4-speed automatic transmission, and came with front-wheel drive or all-wheel drive. Available on front-drive models was traction control and GM’s Stabilitrak antiskid system. Antilock 4 wheel disc brakes, 17-inch wheels, and OnStar assistance were standard. Front side airbags were available, but curtain side airbags weren’t offered. Also standard were a CD/MP3 player, DVD entertainment, and a roof-rail system with optional snap-on storage modules. Rear heating/air conditioning was optional on 2, standard on 3. Optional on both were satellite radio and a remote starting system that operated from the keyfob.

GM quoted 10.5 sec 0-60 for front-drive models, 11.2 for AWD versions. However, Relay feels livelier than those numbers suggest and compares well with most rivals. The AWD’s extra weight is felt more from a stop than during passing or merging, where power is adequate in most instances. Our test front-drive 3 averaged 19.8 mpg in mixed driving. Tests of a similar Buick Terraza AWD version yielded 19.4 mpg in mostly highway driving. Whether front- or all-wheel drive, Relays easily absorb most bumps and provide a comfortable highway ride. Relays with the optional load-leveling rear suspension feel a bit more stable at highway speeds and are better able to handle heavy loads. Handling is midpack among minivans, and though there’s marked body lean in turns, Relay doesn’t feel tippy. Steering is somewhat vague at highway speeds, but braking is controlled and progressive. AWD is a boon in slippery conditions, where front-drive models benefit from the available traction control. Side mirrors generate noticeable wind noise at highway speed, but the engine is well muffled. Tire noise is impressively low up front, but more prominent in back where kids might have a hard time hearing front passengers.

Inside, there’s an unobstructed view of the gauges, and all controls are legible and easily accessible. Dashboard materials and switches have an upscale flair, but some trays and drawers are made of budget-grade plastic. Standard DVD entertainment is a plus for families. A low step-in makes climbing aboard a simple matter. Front head and leg room are generous, and the driver enjoys fine outward visibility aided by large mirrors. There’s also good 2nd- and 3rd-row head and leg room, though the narrow space between the 2nd-row buckets makes access to the 3rd row more difficult than in some competitors. Standard 2nd-row seats fold farther out of the way than the available leather buckets, but returning the driver-side seat to an upright position requires an awkward reach over the seatback. Third row seats are set too close to the floor for best adult comfort, but they’re fine for kids. Though the 2nd-row bucket seats don’t fold into floor, they’re light enough for easy removal. The 3rd-row seat doesn’t disappear into floor either, but folds level with a cargo-area convenience tray that stands about 4 inches above the floor. The available rear cargo organizer is handy for groceries and other items, but GM’s minivans don’t have as much storage space behind the 3rd-row seat as those rivals that have a well.