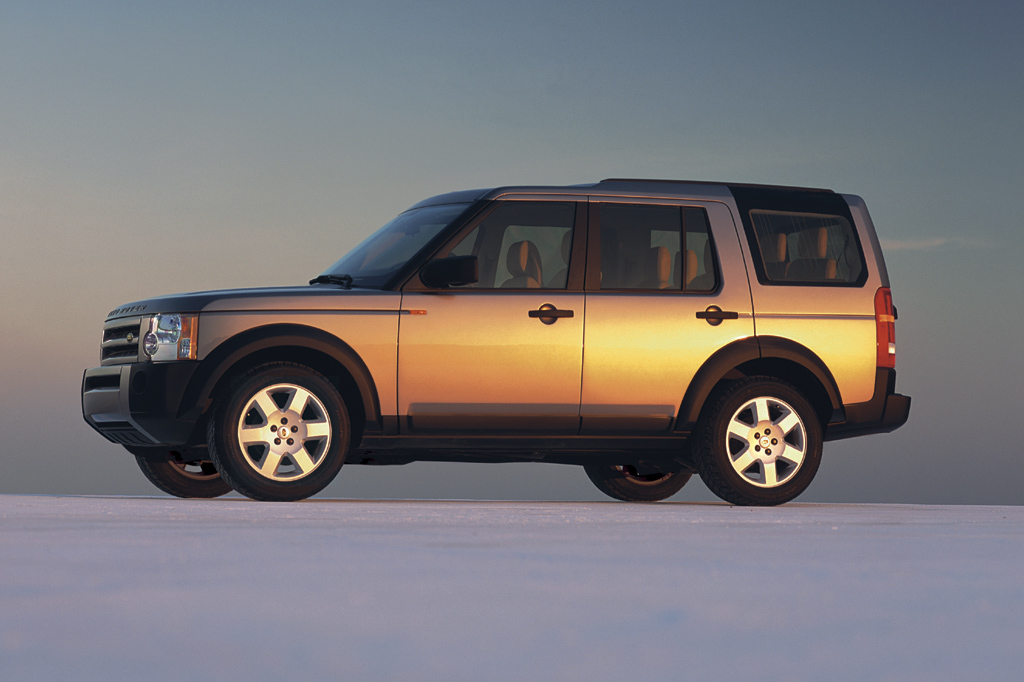 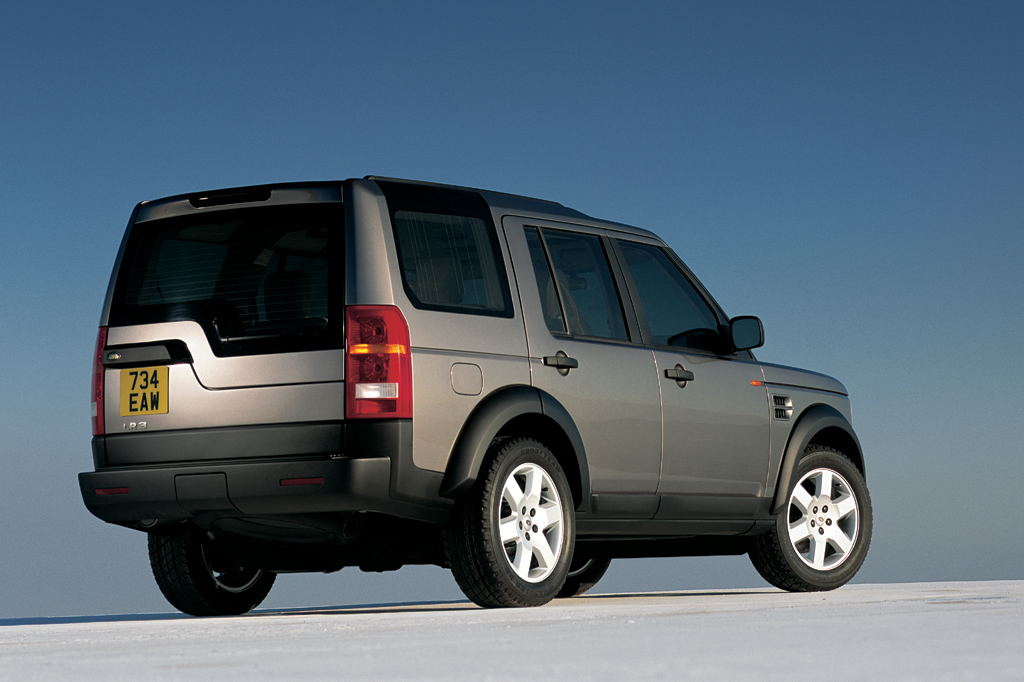 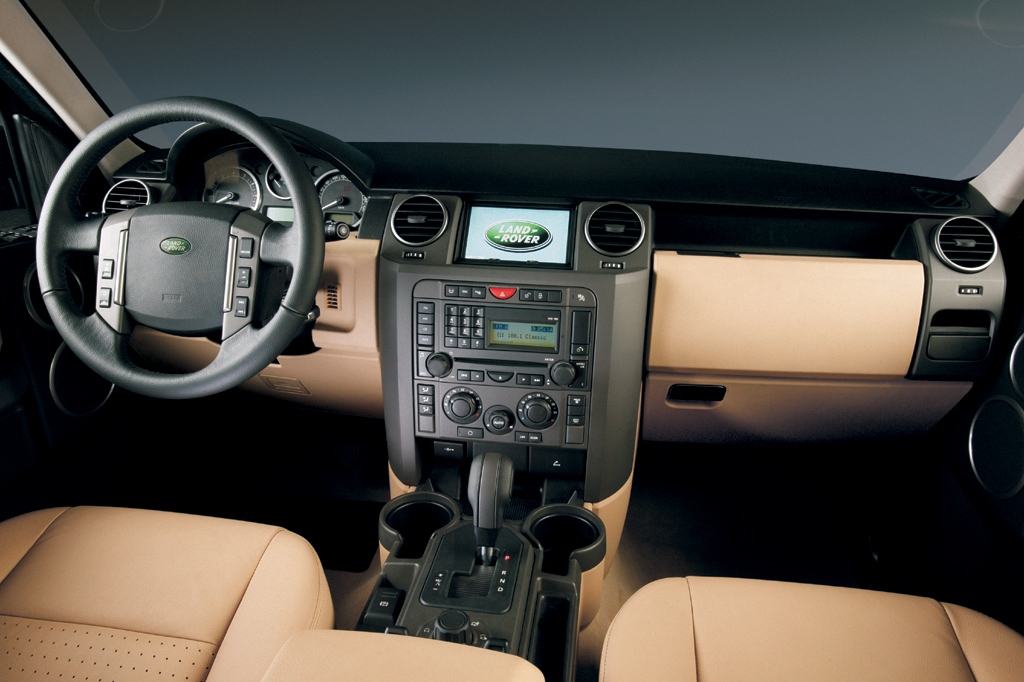 In a class trending toward ever-more-carlike SUVs, the tall, off-road-oriented LR3 seems anachronistic. In reality, it’s used exactly the way its more-carlike competition is, and in that capacity, delivers good passenger and cargo room and unexpected comfort. Though compromised by old-school-SUV handling and ergonomics, as well as poor fuel economy, the LR3 is worth a look for anyone who wants a capable off-roader that is civilized enough for every day duty.

Land Rover redesigned its best-selling model for 2005, giving it a new name, new styling, and more power. The LR3 replaced the 1994-2004 Discovery and was nearly 14 inches longer in wheelbase, 5.7 inches longer overall, and some 850 lb heavier. Cargo volume increased by 27 cu ft, but passenger space was little-changed. LR3 retained Discovery’s raised rear roof section, but the spare tire mounted inside instead of out, and a glass liftgate with drop-down tailgate replaced a swing-out cargo door. It had seating for five, or for seven with an optional 3rd row. Front side and curtain side airbags were standard. The curtain airbags covered all seating rows.

LR3 launched with a 300-hp V8 (Discovery had a 217-hp V8). Released midyear was a base V6 version with 216 hp. Both had a 6-speed automatic transmission with manual shift gate. All-wheel drive with low-range gearing was standard and included a locking center differential for severe off-road conditions. A locking rear differential was available. Also standard were antilock 4-wheel disc brakes, traction/antiskid control, and hill descent control. New was Land Rover’s Active Roll Mitigation designed to detect an impending tip and activate the antiskid system to reduce the chances of a roll.

The V6 LR3 was offered only as the base model. V8 models were the SE and HSE. HSE had 19-inch wheels vs. base and SE’s 18s, plus additional equipment and unique trim. LR3 replaced the Discovery’s solid axles and metal springs with an independent air-spring suspension with four available ride heights and automatic load leveling. LR3 also introduced Land Rover’s Terrain Response system as standard; twisting a dial changed suspension and powertrain electronic calibrations to accommodate normal driving, slippery pavement, mud, sand, and low-speed off-roading.

We haven’t driven the V6, but the V8 delivers good, not great, scoot in this weighty SUV. Land Rover says LR3 does 0-60 mph in 8.0 seconds, placing it midpack for this class. There is ready power in highway passing, but the transmission is slow to downshift on hills. Throttle response changes depending on the transfer-case setting; it is less sensitive in low range for better off-road control. Engine noise is nicely subdued; some highway-speed wind noise is the only demerit of note. Fuel economy is typical of a big SUV, poor. Our test SE averaged 12.8-14.1 mpg in mixed city/highway driving. A test HSE averaged 15.5 mpg in exclusively freeway travel. Land Rover recommends premium-grade fuel.

Ride and handling are also typical for a large SUV in this class. The LR3 is comfortably absorbent over bumps, though rear-seat passengers notice some hop on rough roads. Dips and wavy surfaces induce some residual bobbing. The steering is nicely weighted and the tires are grippy, but LR3 feels a bit top heavy on twisty roads and in fast lane changes. A tight turning circle means good parking lot maneuverability. The brakes are easy to modulate and have impressive stopping power. Over hills, mud, and rocks, the LR3 is a billy goat, and the Terrain Response System takes guesswork out of most off-road driving.

The interior has some of the quirks that Land Rover is known for. Small print makes the gauges difficult to read at a glance, and the controls are a somewhat confusing jumble of switches, knobs, and buttons. The radio and navigation and climate systems are hard to decipher. On the positive side, the off-road settings trigger a graphic display of front-wheel angle–a useful feature. Interior materials are of high quality, but the lack of wood or fancy trim lend LR3 an upscale outdoorsy look rather than uptown opulence.

Those who like SUVs will be pleased with the commanding driving position. The seats are comfortable and upright. Head and leg room are ample. Visibility is excellent, and is aided by front and rear obstacle detection on HSE. Step-in height is acceptable when the LR3 is set to the lowest suspension setting; difficult at the highest setting. Climbing into the 3rd row is complicated by the tall step-in and narrow pass-through. The 2nd and 3rd-row seats, however, are unusually comfortable, with ample head and leg room. Three adults fit in the 2nd row, but we wouldn’t recommend it on long drives.

Utility is also a plus. The tall cargo hold has ample volume with five seats, and reasonably good load space with seven. Both of the rear rows fold flat to create a spacious load floor, but are awkward to fold/unfold. The clamshell-style tailgate is open to debate: some testers say it complicates loading/unloading, others praise its versatility. There are numerous useful bins and cubbies in the cabin, but the glovebox difficult to open if passenger seat occupied.