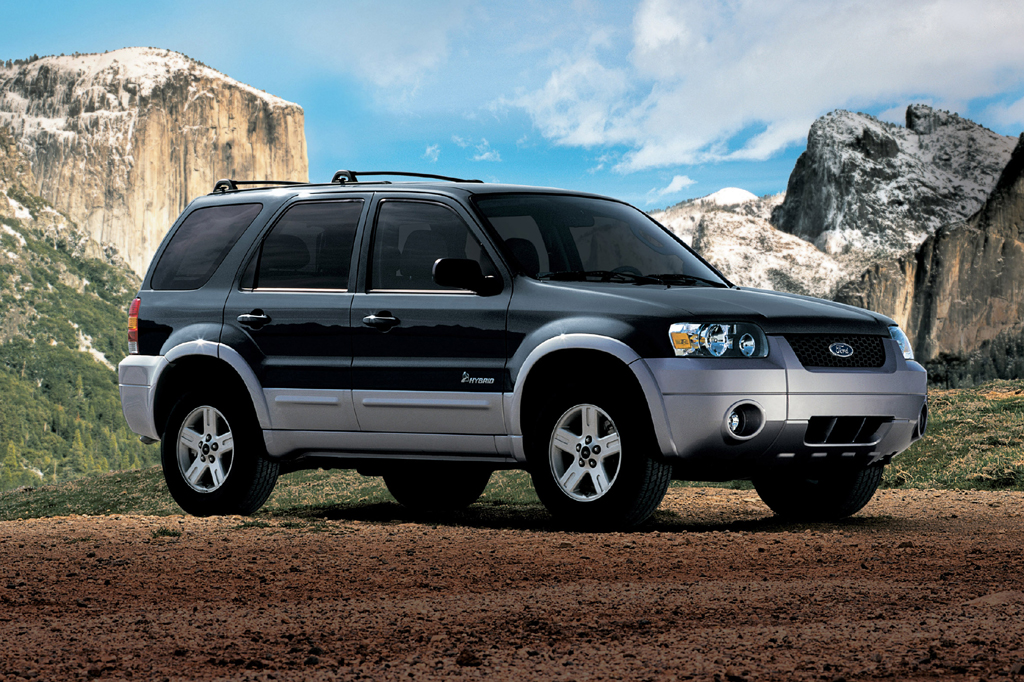 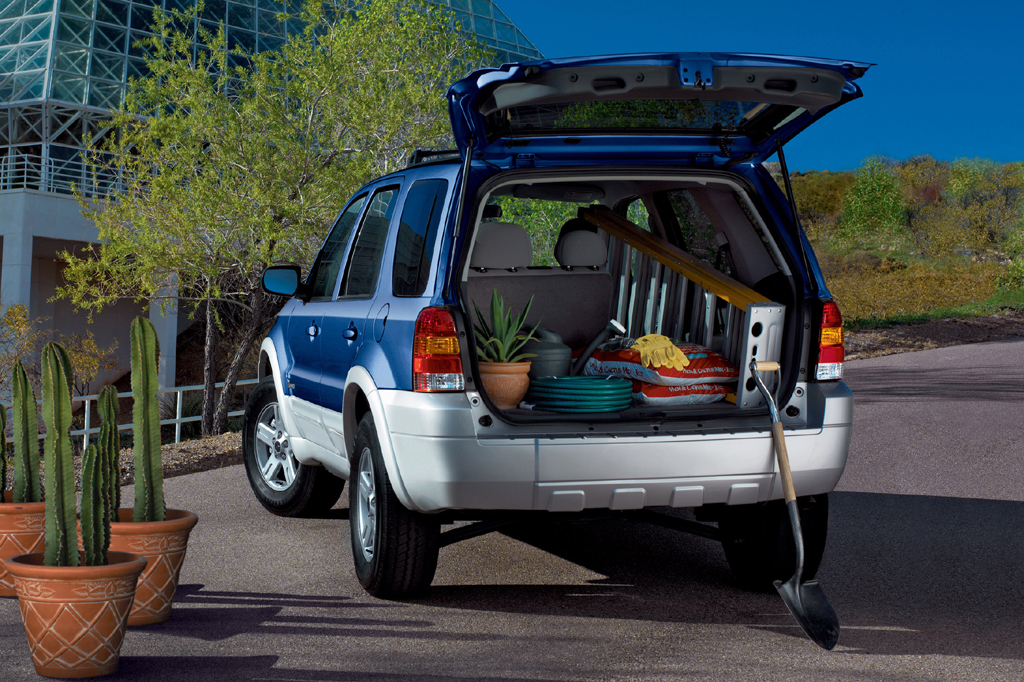 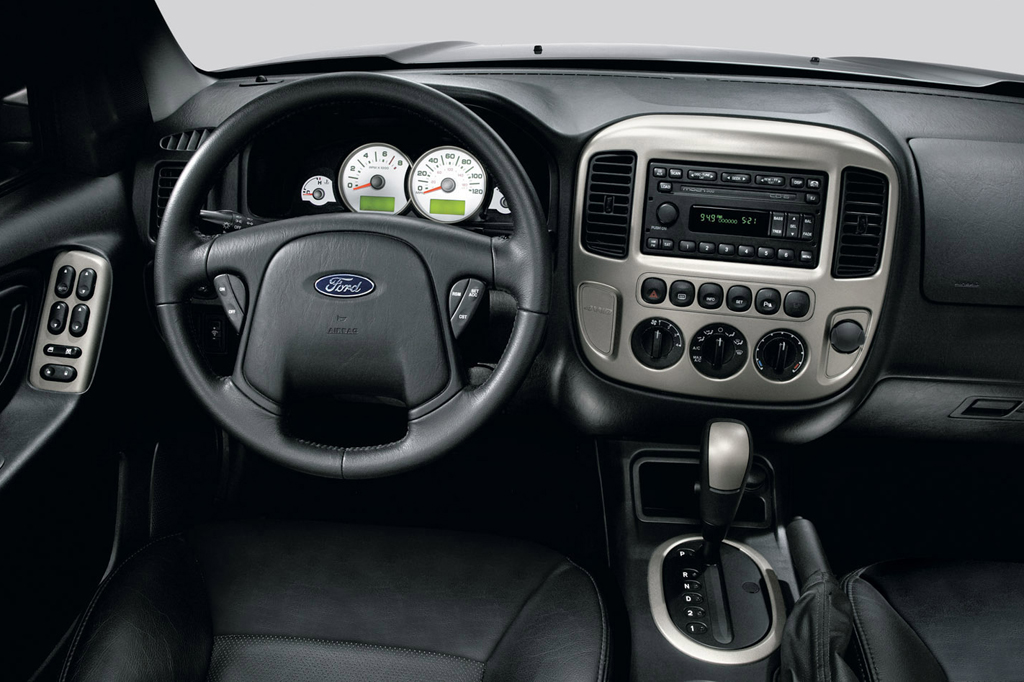 By any name, these compact SUVs are solid, spacious, practical, and pleasant enough to drive. In 2005-06, they ranked as Best Buys. Competitive new-car pricing has made them high-value alternatives to some larger truck-based SUVs that use more gas and don’t have significantly more interior space. Still, these are among the oldest designs in the compact-SUV field. Until the Mariner offered a gasoline/electric powertrain, the Escape Hybrid was America’s only compact SUV hybrid, and it adds fuel savings to Escape’s other attributes. Though base new-vehicle prices have been relatively steep, an Escape doesn’t compromise performance. Escape resale values have been lower than those for most Ford products, which can be good news for used-vehicle shoppers.

Introduction of a gas/electric Hybrid version topped changes to Ford’s smallest SUV. Again offered with front- or all-wheel drive, the Escape also got a larger base engine, freshened styling, and additional safety features.

Four-cylinder Escapes could have a manual transmission or, new for 2005, optional automatic. (Prior four-cylinder models came only with manual shift.) A 200-hp V6 with automatic transmission also was available.

The Hybrid had a four-cylinder gas engine, assisted by an electric motor, for a combined 155 horsepower. Its electric motor helped save fuel by powering the Hybrid at low speeds and assisting the gas engine during acceleration. No plug-in charging was ever required; instead, the system recharged the motor’s batteries when coasting or decelerating. The Hybrid used a continuously variable transmission (CVT) that functioned like an automatic but had a near-infinite number of ratios.

All models came with front-wheel or all-wheel drive; the AWD system did not include low-range gearing. For 2005, Escape’s automatic-transmission shift lever was mounted on the floor console rather than the steering column. Antilock braking, previously optional, now was standard.

Newly optional were head-protecting curtain side airbags for both seating rows. They were designed to deploy in side impacts and rollovers. Escapes also got revised front and rear styling. Ford said it had more sound insulation, too.

Mazda’s Tribute and the new 2005 Mercury Mariner were similar to Escape, but didn’t offer a hybrid version at this time. Rivals included the Honda CR-V, Jeep Liberty, and Subaru Forester.

Escapes could have a 2.3-liter four-cylinder engine that produced 153 horsepower, driving either a five-speed manual or four-speed automatic transmission. The optional 200-hp V6 worked only with automatic. In the Ford Escape Hybrid, a four-cylinder gas engine, rated at 133 horsepower, was assisted by an electric motor, for a combined total of 155 horsepower. Hybrids mated with a continuously variable transmission (CVT). Escapes could have either front-drive or all-wheel drive.

Four-cylinder versions of Escape, Tribute, and Mariner suffer lazy takeoffs and build speed modestly, but keep up with most traffic. They perform adequately under most conditions, at least without a sizable load. Escape V6 models have ample power for passing and merging, helped by an alert automatic transmission. Automatic-transmission models have accelerated to 60 mph in 8.9 seconds. The Hybrid is adequate for most conditions, and seems underpowered only in passing attempts at highway speeds or when climbing steep grades. Hybrids feel quicker than suggested by the 9.6-second 0-60 mph acceleration time of a 2WD model. The Hybrid’s CVT helps by keeping the gas engine in the strongest part of its power band. The gas engine restarts automatically as you touch the gas pedal. At stops, it shuts off with a slight shudder. Hybrids also drag slightly when coasting to a stop. Towing capacity is 1000 pounds with the Hybrid, 1500 pounds for other four-cylinder models, and 3500 pounds for V6s.

Fuel economy varies by model. A 2WD four-cylinder Escape averaged 20.5 mpg. AWD V6 models have averaged 17.5 to 19.2 mpg in mixed city/highway driving. A V6 2WD model averaged 18.1 mpg. As a comparison, an extended-use AWD V6 Tribute averaged 19.5 mpg, including lots of highway driving. Hybrids have averaged 28.8 mpg with 4WD, 31.7 mpg with 2WD; but only 23.5 mpg for one 2WD version subjected to plenty of city driving and gas-eating acceleration runs. The Hybrid’s fuel tank holds 15 gallons, versus 16.5 on other Escapes. All engines use regular-grade fuel.

With their ride-biased chassis tuning, four-cylinder models have shown good bump absorption, but they suffer sloppy body motions on uneven surfaces. V6 versions feel quite taut, with minimal wallow or float over high-speed dips and swells. Yet, some sharp bumps register abruptly.

Steering/handling also varies. Models with 15-inch tires can feel imprecise in quick directional changes, with marked body lean and noseplow. The same has been true of the relatively heavy hybrids. Other models show fine cornering balance and grip, with only moderate body lean. Steering feel is satisfyingly firm and direct, though the Hybrid’s electric power assist dulls road feel. Good braking power has, according to some testers, been marred by nosedive in simulated panic stops. Hybrid brakes seem to need greater pedal effort when driving on electricity alone.

Ford’s V6 engine is much smoother and quieter than the four-cylinder (including Hybrid), which grows gruff in rapid acceleration. Hybrid powertrains have emitted various whirs and whines, too. Wind rush is prominent at highway speeds in all models, so is tire roar on coarse pavement. Some testers have felt that Tributes and Mariners are slightly quieter overall than Escapes.

Legible gauges sit on a generally well-arranged dashboard. The automatic-transmission shift lever, moved from the steering column to the floor console, no longer blocks access to nearby controls. Interior materials are appropriate for the Escape’s price. Trim ranges from plain to slightly upscale.

Tall riders may want more front headroom in sunroof-equipped models. Otherwise, clearances are generous, and the airy, comfortable cabin belies the compact exterior dimensions. Leg space is adult-size, but surprisingly high seats limit headroom for taller occupants beneath the optional sunroof. Some testers have considered the front seats flat and unsupportive for long-distance drives. Driver views are unimpeded to sides and rear. More back-seat knee and foot room is available than in many midsize SUVs. Bench seats are supportive and well contoured, even in the center position. The rear floor is nearly flat, and the cabin is wide enough for short-trip three-adult comfort. Doorways are wide, but step-in is higher than most rivals’. Rear DVD entertainment has been available for Tribute, but not Escape or Mercury’s Mariner.