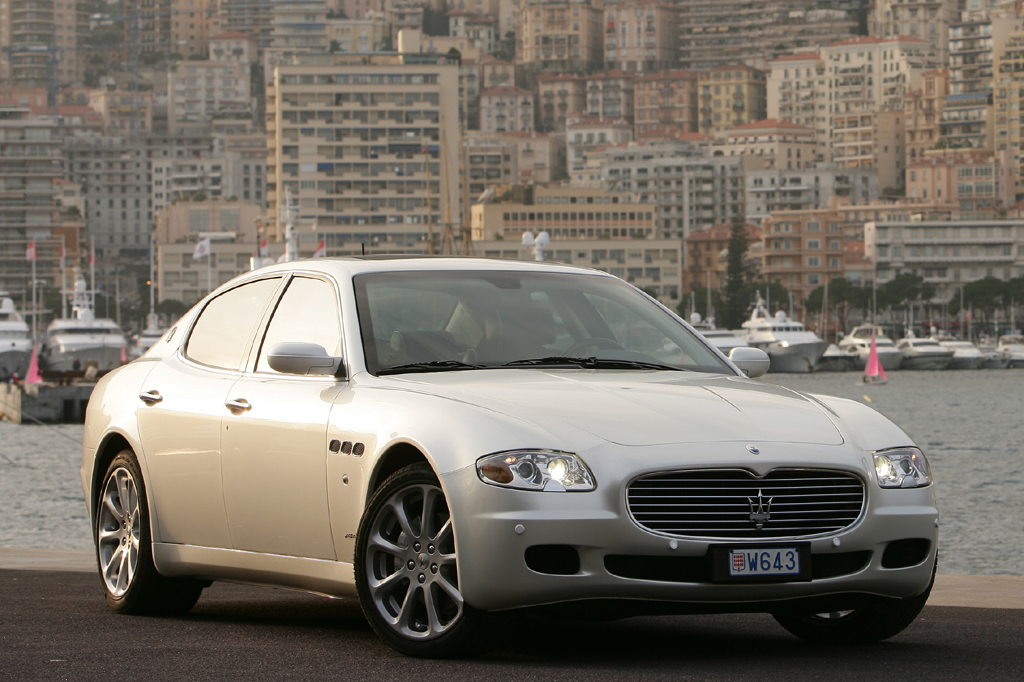 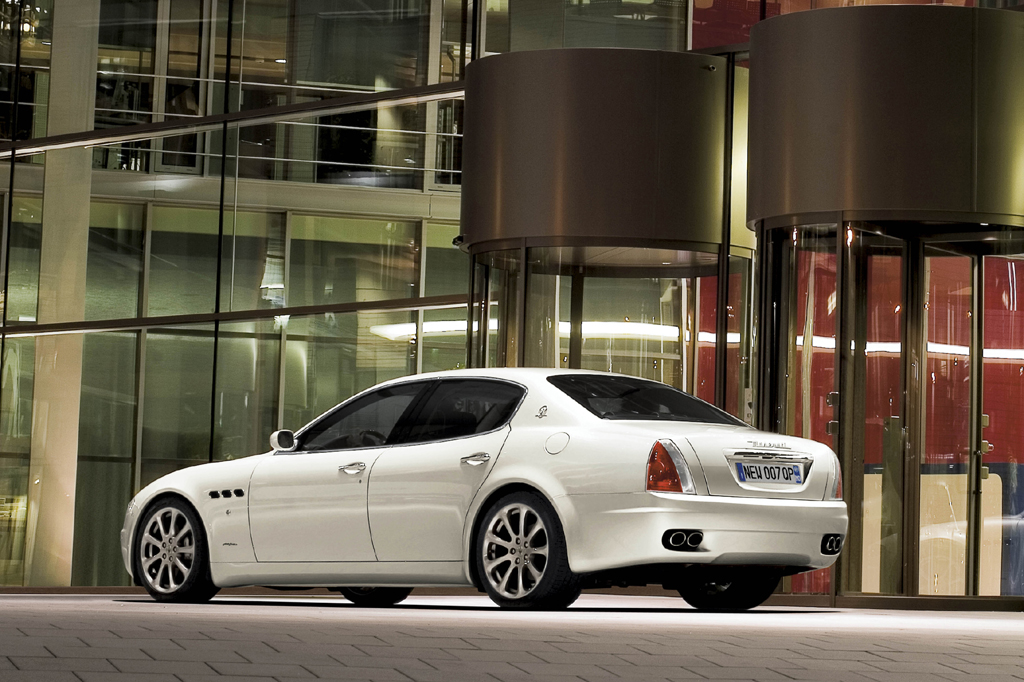 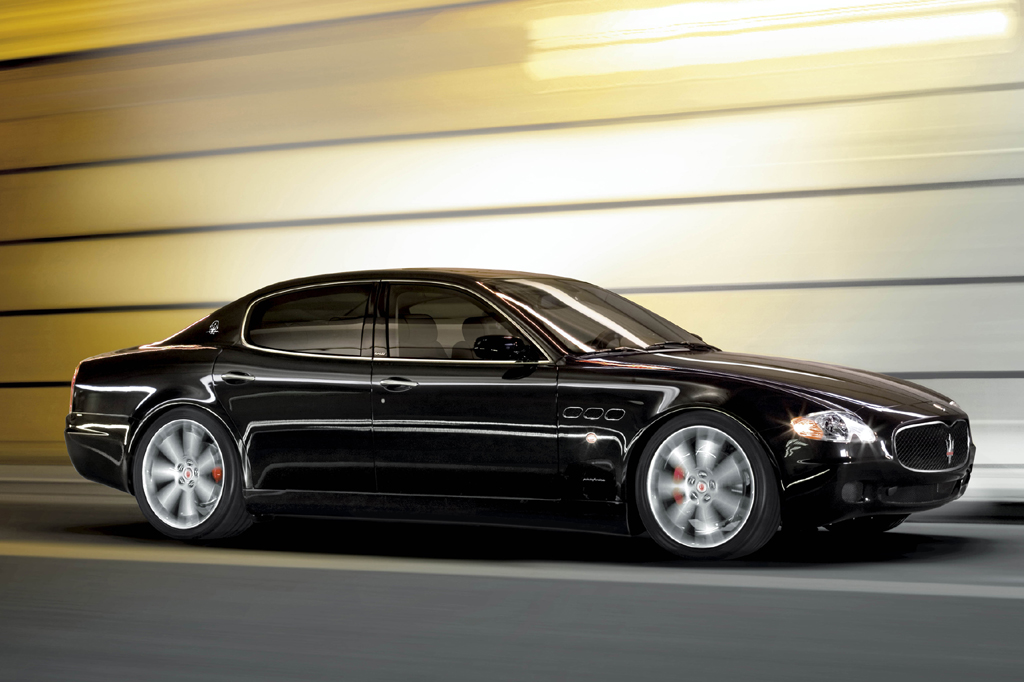 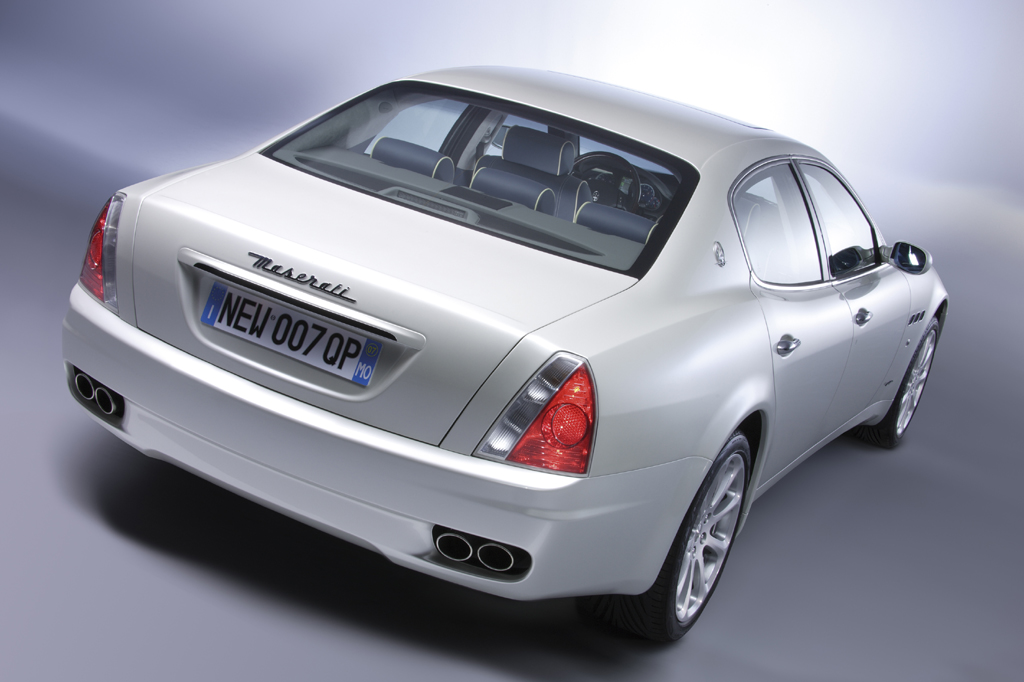 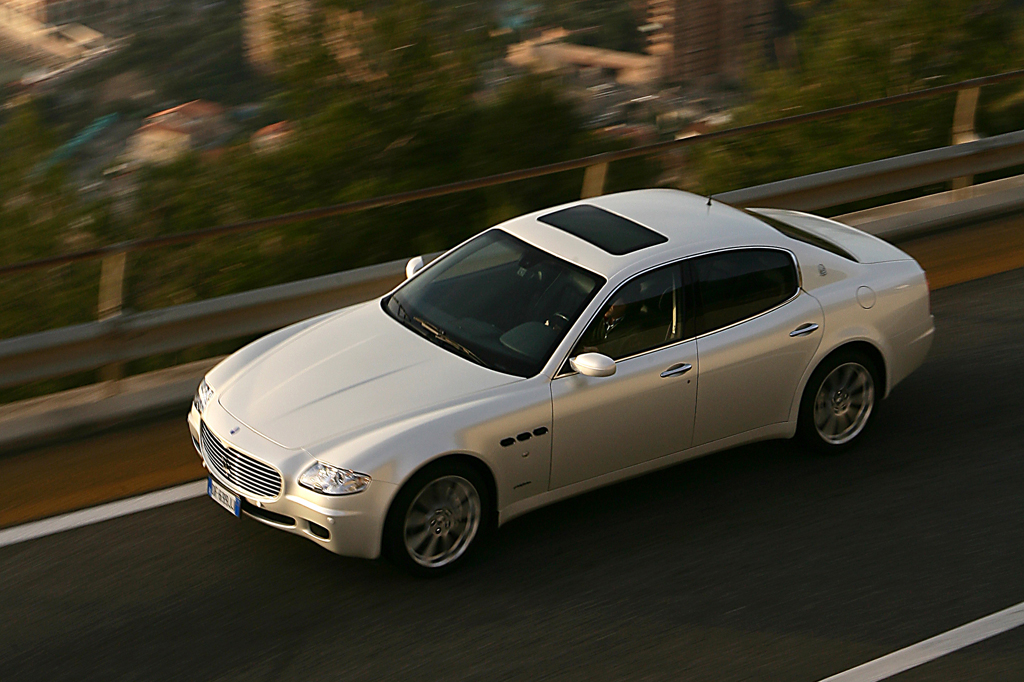 In terms of space and road isolation, this curvaceous sedan badly trails the likes of Mercedes’s vaunted S-Class sedans. Shoppers with a lust for the road may find the Quattroporte more to their liking, however, as this Maserati aptly blends automotive passion with surprising refinement. For spirited driving, lush interior appointments, and hypnotic engine music, Quattroporte is a must-see.

Introduced for 2005, Quattroporte was the Italian automaker’s sedan–a five-passenger companion to the company’s smaller coupes and convertibles. “Quattroporte” meant, simply, “four doors. Maserati described the new sedan as “contemporary Italian art” with a “sporty temperament.” Styling details included a long hood, prominent grille, steeply raked windshield, and low-slung front fenders that contained “portholes” (reminiscent of those in late 1940s-1950s Buicks). Interiors could be finished in standard Rosewood; or in mahogany, briarwood, or titanium-style. A button in the center rear armrest could be use to push the front passenger forward, for increased rear legroom.

All early Quattroportes came with a 400-horsepower, 4.2-liter V8 engine, mounted behind the front axle. A six-speed “DuoSelect” automated-manual was the sole transmission offering, mounted at the rear for increased rear weight bias. Maserati claimed that placement improved handling. Lacking a clutch pedal, the DuoSelect transmission could be set to shift like an automatic, or gearchanging could be accomplished using shift paddles mounted at the steering column. A Skyhook automatic-damping suspension was standard, as were Brembo disc brakes. Alloy wheels held 18-inch tires. Weight distribution was 43/57 (front/rear). Maserati claimed 0-60 mph acceleration in as little as 5.1 seconds, and each car was road-tested in Italy. Standard safety features included antilock braking, traction control, front side airbags, and curtain side airbags. An optional front-seat Comfort package included heating, ventilating, and massaging, plus an automatic system that adjusted seat padding according to the occupant’s movements.

Quattroporte competitors included the Audi A8, BMW 7-Series, and Mercedes-Benz S-Class. Maserati had been out of the U.S. market since 1991. Then, in 2002, the Italian automaker introduced a new Spider convertible, followed by a GT coupe. The Quattroporte made its debut at the Frankfurt Motor Show, in fall 2003, as the first Maserati designed by Pininfarina in half a century.

With the conventional automatic transmission, a Quattroporte lacks the immediate thrust of rivals with larger V8s from BMW or Mercedes-Benz. Once underway, however, this sedan’s Ferrari-sourced engine shines, pulling vigorously as revs climb. The responsive, well-matched transmission shifts with authority but is never harsh. No model with the DuoSelect transmission has been made available for Consumer Guide to test. Road-testing of an early Quattroporte affirmed that the complaints of lurching and jerking from the DuoSelect transmission were well-founded. Operation was entirely out of character for a car in this league.

Consumer Guide has had no opportunity to measure fuel economy, but EPA estimates have fallen far short of thrifty. Quattroportes require premium-grade gasoline.

Maserati places a high value on road feel, so every road-surface nuance is communicated into the cabin. Nevertheless, this sedan’s ride is remarkably free of harshness. Buyers attuned to more-conventional luxury suspension tuning may find Quattroporte’s ride more challenging than relaxing. Enthusiasts will praise the car’s engaging demeanor.

Handling is sharper than can be reasonably expected from a large, heavy sedan. Remarkable balance in corners and direct, communicative steering combine for rewarding, sports-car-like agility.

More music than mechanical noise, the Quattroporte’s engine is a delight to hear rev, encouraging aggressive driving. The engine is always heard, even in relaxed cruising; but for most Maserati drivers, that’s probably just fine. Wind and road noise are generally squelched, though Quattroporte doesn’t even approach the hushed cabin environment of Mercedes S-Class sedans.

Large, clearly marked gauges make getting vital information a snap. Most controls are logically placed and easy to use. The standard navigation system in early models is a nightmare of nonsensical buttons and knobs however, requiring lengthy study before use. We haven’t had an opportunity to test the later navigation system. More private library than car interior, the Quattroporte’s cabin exudes luxury, with sumptuous leather accented by real wood and chrome trim. The only disappointment is a standard headliner that looks and feels cheap. An available Alcantara headliner looks fabulous, and might be worth looking for in a secondhand Quattroporte; but at these new-car prices, it ought to have been standard.

Despite its sporty, contoured visage, Quattroporte is surprisingly roomy up front, with sufficient headroom and legroom for most folks. Decently large door openings make for graceful entry and exit. The rear seat offers far less space than the limo-like Mercedes-Benz S-Class or BMW 7-Series. Two adults will fit fine for shorter jaunts, though headroom is tight for six-footers.

A smallish trunk means packing lightly for anything more than a weekend getaway. Cabin storage is little better, comprised mostly of a narrow center console and small-item glovebox.