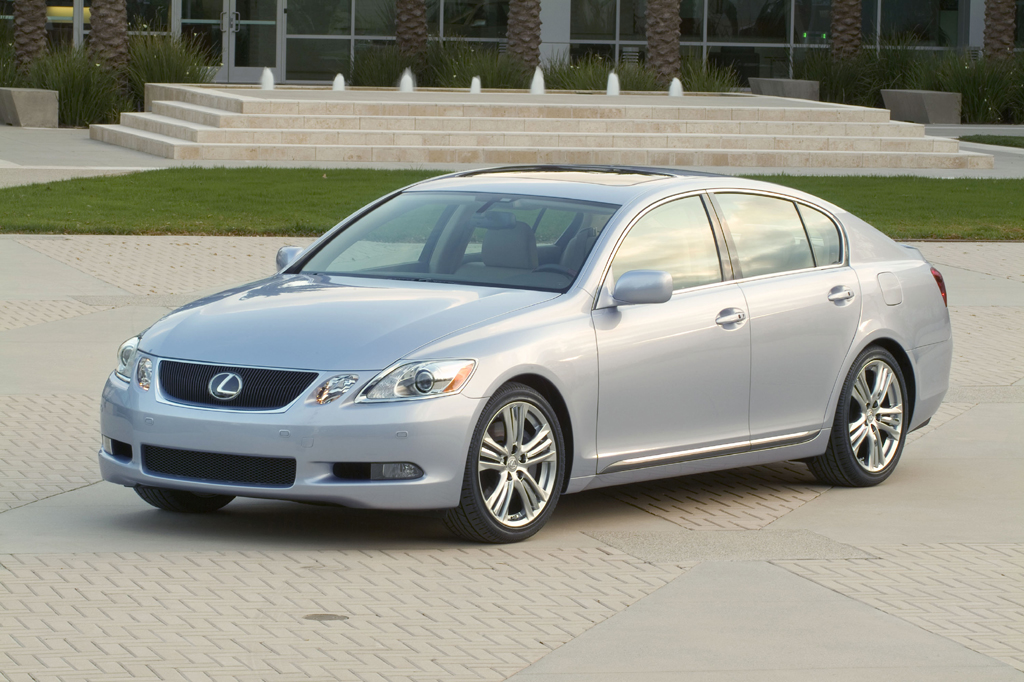 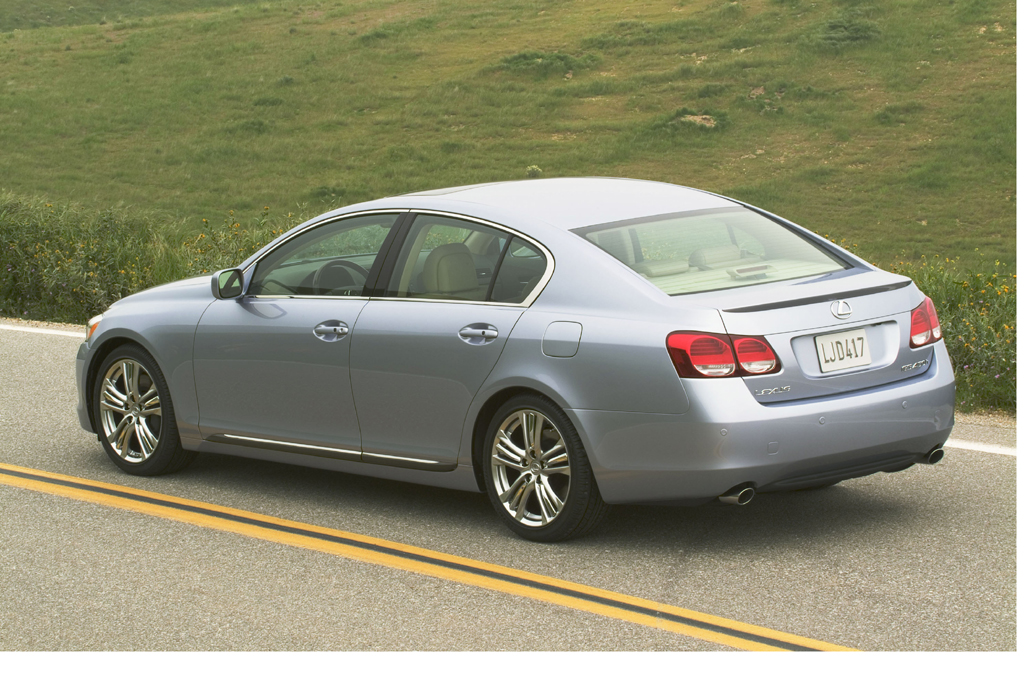 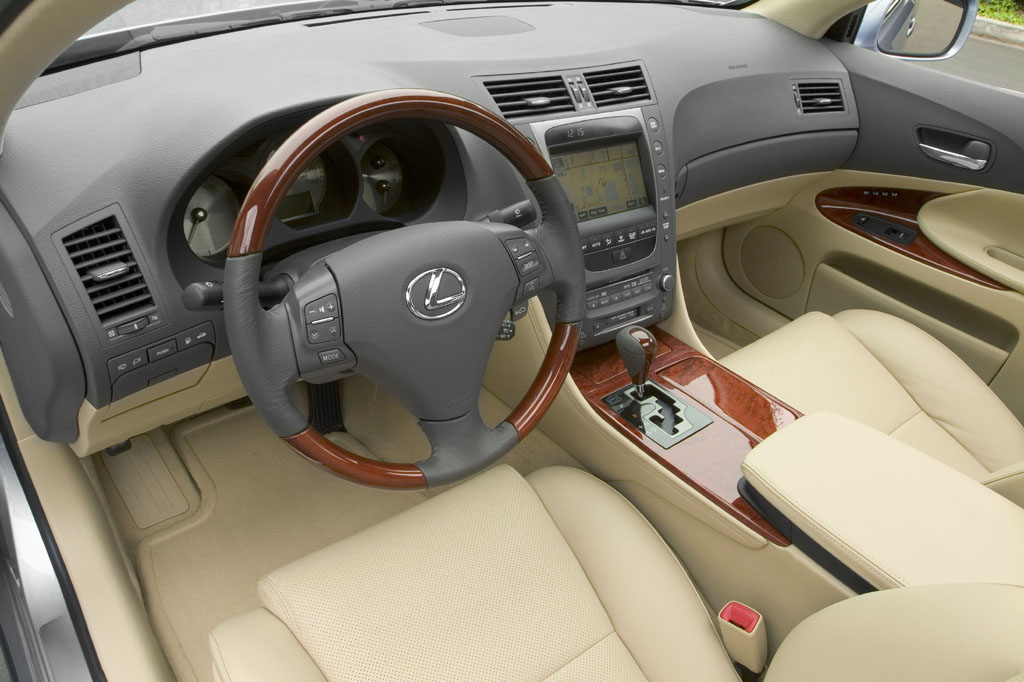 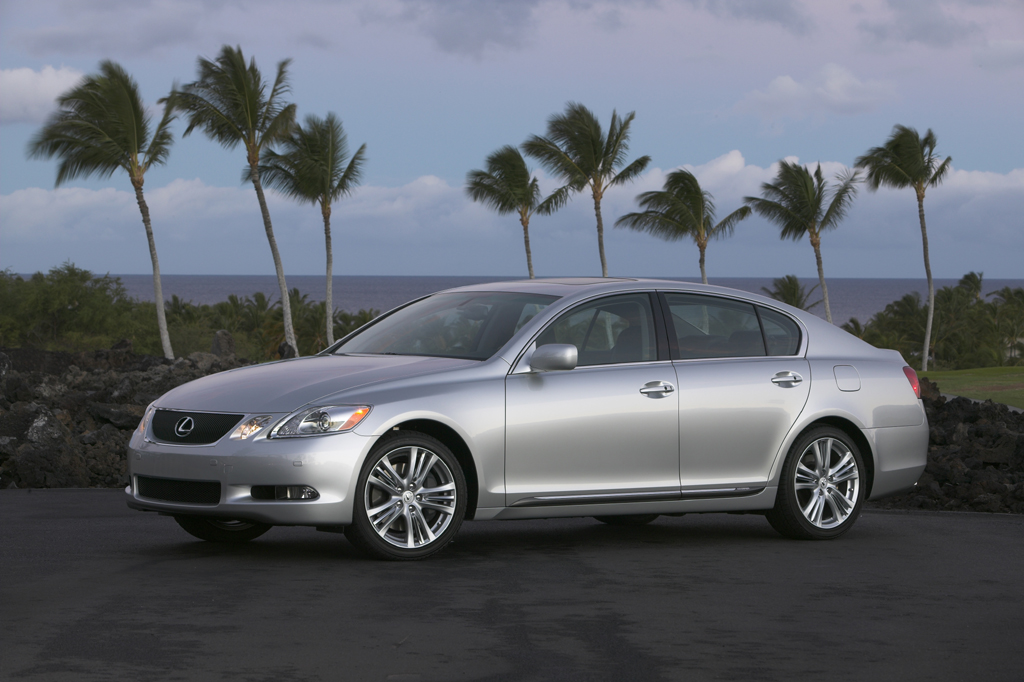 Lexus redesigned its midsize sedans for 2006 with more power, fresh styling, and new features–including available all-wheel drive. Compared to the 2001-2005 version, the GS gained 2 inches of wheelbase and measured an inch longer overall.

A gas-electric hybrid version, called the GS 450h, went on sale in early 2006. It teamed a gasoline V6 engine with an electric motor to produce a total of 339 horsepower. Like other Lexus and Toyota hybrids, the GS 450h could run on either gasoline or electric power, or both sources, depending on conditions. No plug-in charging was required. A continuously variable transmission (CVT) worked with the GS 450h.

In the 2006 model year, the GS 300 had a 245-horsepower V6 engine, while the GS 430 held a 300-horsepower V8. A larger (3.5-liter) engine went into the V6 model for 2007, and the GS 430 was re-rated at 290 hp. All models used a six-speed automatic transmission with manual shift gate, except for the GS 450h hybrid. That sedan used a combination of 3.5-liter V6 gasoline engine and an electric motor, with a continuously variable transmission (CVT). Only the V6 sedan could be equipped with all-wheel drive. For 2008, a 342-horsepower 4.6-liter V8 and an 8-speed automatic joined the engine lineup.

Engines are strong and smooth, helped by Lexus’ silky, responsive transmission. The V6 has plenty of ready power, whereas the GS 430 qualifies as satisfyingly swift. A test GS 300 AWD accelerated to 60 mph in 7 seconds. The V8’s extra thrust is evident but not truly compelling. A GS 430 reached 60 mph in 6.6 seconds. Lexus bills the GS 450h as a high-performance hybrid. In reality, the hybrid powertrain lacks the immediate kick of a conventional V8, but the 450h does surge ahead with dispatch, accelerating to 60 mph in 6.1 seconds. Overall, the hybrid system calls little attention to itself.

Ride comfort is generally a plus. Each GS is comfortably unruffled on smooth pavement, but sharp bumps too easily make their way through to the passenger compartment with 18-inch or run-flat tires. Some testers have complained of minor float over large humps.

Handling capabilities differ little among the three GS models, though none feels as agile as a BMW 5-Series. Even so, cornering lean is modest, augmented by good grip and balance. All-wheel drive is much preferred to rear-drive in slippery or wintry conditions. Steering is quick enough, but can feel a bit overassisted. Some testers have suggested that strong stopping power can be marred by poor pedal modulation, with brakes feeling either mushy or touchy.

Though quiet, these cars are less isolated than the Lexus norm, but they equal nearly every class rival for hushed refinement. The sole annoyance is coarse-surface tire thrum. Wind rush is impressively low. The classy-sounding V8 engine rises to a muted growl at full throttle, while the GS 450h sounds slightly raspy. All engines are nearly inaudible at idle.

Gauges are large and legible on a pleasing dashboard layout, but switches for secondary functions, such as power-mirror adjustment, trip odometer reset, and fuel-door release are housed in a drop-down pod to the lower left of the steering wheel. This reduces clutter, but needlessly compromises access to these controls. If left open, the pod can hit the knee of the driver who’s entering the vehicle. Lexus’ touch-screen control system interfaces with too many functions, complicating what should be simple adjustments. Lexus-typical cabin decor blends high-grade plastics, leather, and genuine wood accents.

Six-footers get ample front legroom, but only average head clearance, on seats that feel all-day comfortable. Taller-still drivers may feel cramped, though. A power tilt/telescoping steering wheel has been standard, but some testers believe lack of power-adjustable pedals is a curious omission for a Lexus. Occupants sit fairly high, so good all-around visibility is the rule, despite moderately shallow side and rear windows. The backseat feels no more spacious than in the previous GS–and less roomy than a BMW 5-Series or Mercedes-Benz E-Class, despite Lexus’ claim to the contrary. Rear head and legroom are decent for most adults, but foot space is limited and taller riders will crave more head clearance. Entry/exit is hampered a bit by somewhat narrow back-door openings.

Trunk space isn’t all that roomy, and bulky rear-wheel arches intrude. The trunklid swings on non-invasive strut-type hinges, but the small opening makes for awkward loading. No folding rear seatback is installed; just a slim pass-through. Cabin’s small-item storage is limited. The GS 450h hybrid’s battery is mounted behind the rear seats, further reducing trunk space and eliminating the pass-through.