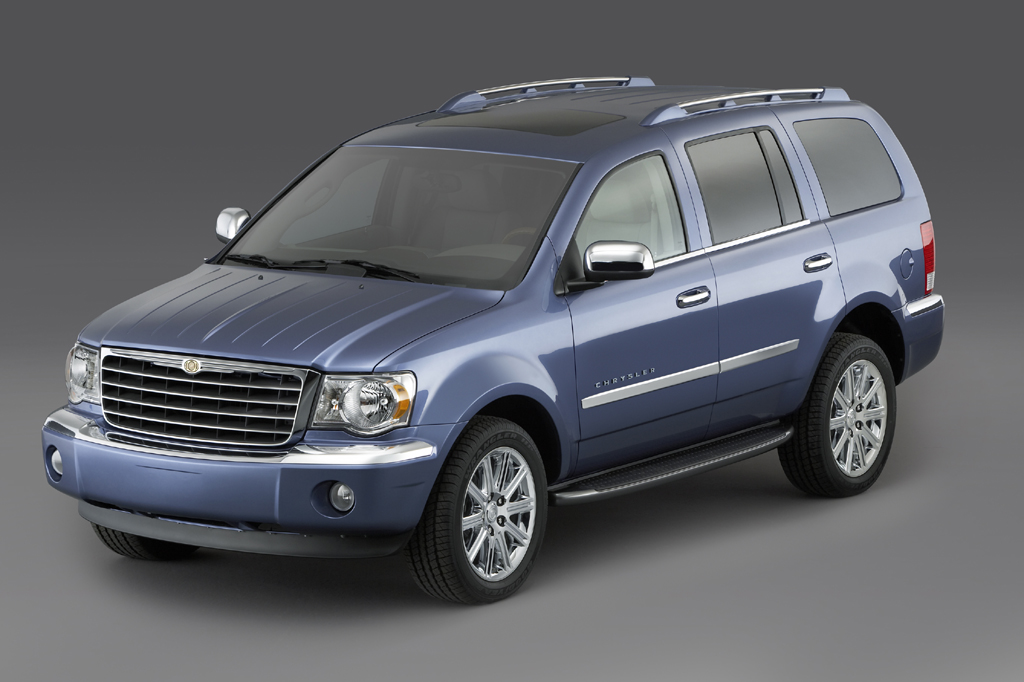 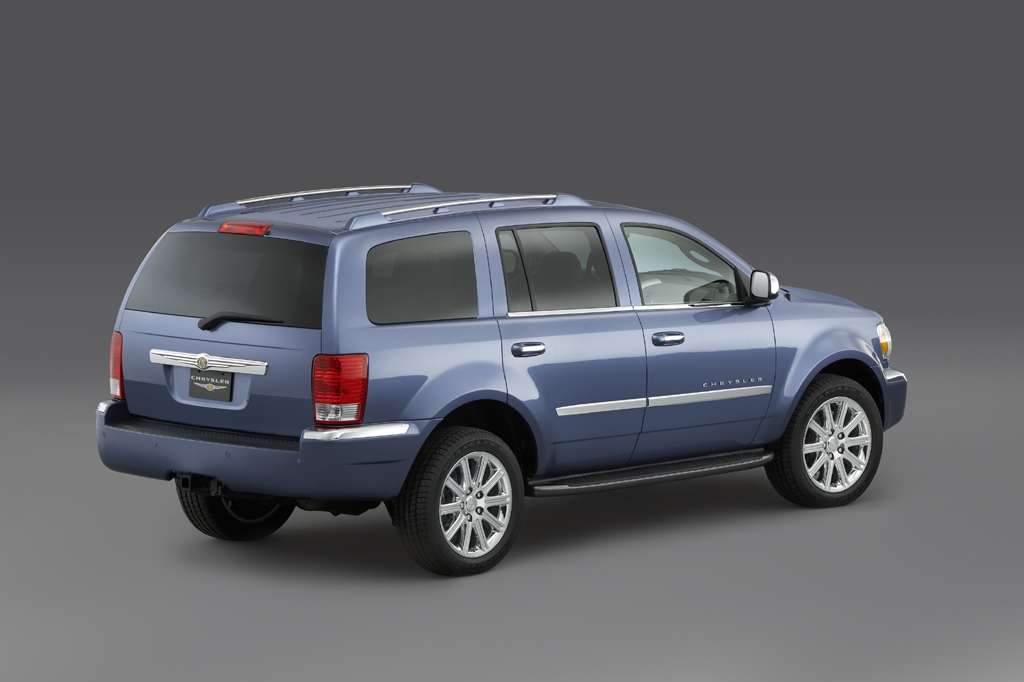 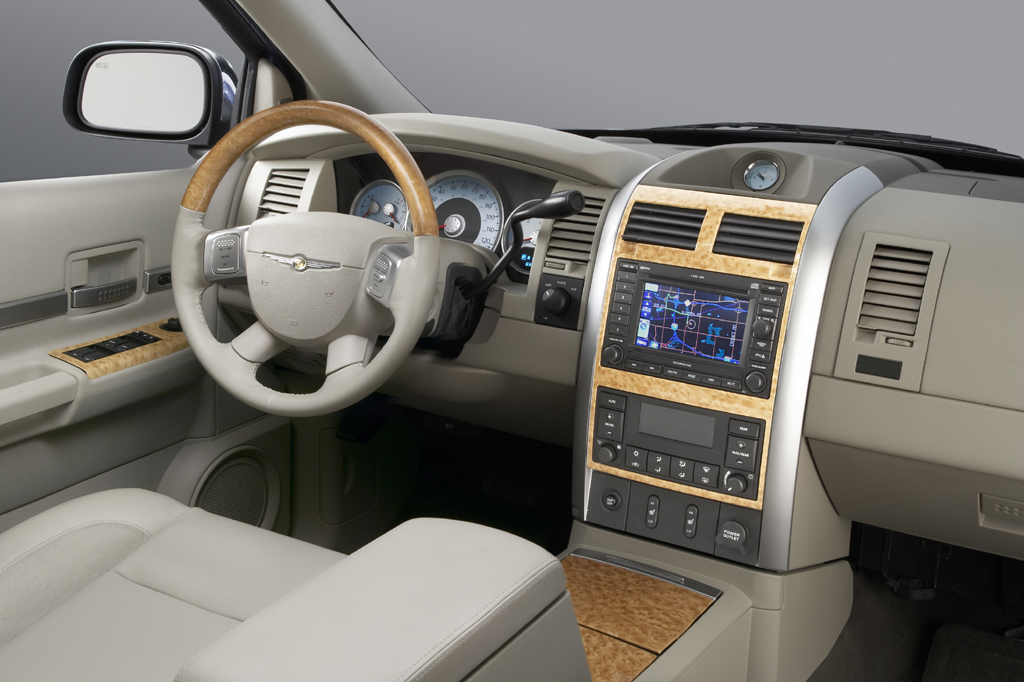 Aspen may appear to be little more than a dressed-up Dodge Durango, but a smoother ride, reduced noise levels, and markedly upscale cabin trim make it a more enjoyable vehicle.

Chrysler launched its first truck-type sport-utility vehicle as the 2007 Aspen. Essentially, the midsize Aspen was a retrimmed Durango from Chrysler’s Dodge brand. The two models shared V8 powertrains and seating for up to seven or eight. With the Aspen, Chrysler had a premium-level competitor against the Acura MDX, Cadillac SRX, and Volvo XC90-plus the forthcoming 2008 Buick Enclave.

Standard engine was a 235-horsepower, 4.7-liter V8; optional, a 335-hp, 5.7-liter Hemi V8 with Chrysler’s Multi-Displacement System cylinder deactivation. Under light load conditions, the Hemi was capable of running on only four of its eight cylinders. The “flex-fuel” 4.7-liter V8 could run either on regular gasoline or E85 (a blend of ethanol and gasoline). A five-speed automatic was the sole transmission. Aspens were available with rear-wheel drive or all-wheel drive. Low-range gearing for possible off-roading was an AWD option.

Antilock braking and an antiskid system with rollover sensors were standard. So were curtain side airbags that covered all three seating rows and included rollover deployment. A new Trailer Sway Control Program was installed.

Standard seating was for eight, with a second-row bench. Optional buckets reduced capacity to seven. AWD models included rear-obstacle detection and a power liftgate-features that were optional for the 2WD Aspen. Additional options included leather upholstery, DVD entertainment, and a navigation system.

When Chrysler introduced the Aspen for 2007, it came with a standard 235-horsepower, 4.7-liter V8 engine. Chrysler’s 5.7-liter Hemi V8 was optional. For 2008, the standard V8 gained 68 horsepower. All engines mate with a five-speed automatic transmission. Aspens may have rear-wheel or all-wheel drive, the latter with or without low-range gearing.

EPA Note: Most figures shown are for 2008 models with 4WD. The Environmental Protection Agency changed its procedure for 2008 to yield more realistic estimates. Therefore, estimated mileage is lower than for prior years.

Acceleration potential depends upon the engine choice. The 4.7-liter V8 that was standard in 2007 models is strong off the line, but lacks passing/merging punch. Chrysler’s 5.7-liter Hemi V8 delivers plenty of power at all speeds, though 5.7 Aspens feel no faster than a V6-powered Acura MDX or Cadillac SRX. Maximum towing capacity is 8900 pounds.

Fuel economy ranks close to dismal. A test AWD Aspen with the initial 4.7 V8 averaged a non-frugal 15.2 mpg in mostly highway driving. Chrysler claimed the 303-hp V8 introduced for 2008 would be more fuel-efficient than the original standard engine, but we’re skeptical. The 4.7-liter V8 uses regular-grade fuel. Chrysler recommends 89-octane for the 5.7 V8.

Expect good grip and modest lean in corners-impressive for a vehicle this large and heavy. Steering, on the other hand, would benefit from less power assist and more road feel.

Chrysler said Aspens had more sound insulation than Dodge’s Durango, but Aspens aren’t quite quiet. Road noise is decently muted, but certain surfaces can induce audible tire roar. Highway-speed wind rush is evident, emanating from the outside mirrors. Engine noise from the Hemi V8 is well muffled in all but full-throttle acceleration.

Large gauges are easy to locate at a glance, though small dial markings may frustrate some drivers. Controls are logically arranged and clearly marked. Cabin materials are notably upmarket of the similar Dodge Durango, though they trail those of premium competitors from Acura and Cadillac.

Front occupants enjoy ample leg- and headroom, even beneath the sunroof’s housing. The driver gets a high, commanding view of the road, but thick front roof pillars obstruct the view around corners. Good rear visibility is aided by large outside mirrors. Entry/exit requires a hefty step-up.

Second-row passengers benefit from good head-, leg-, and foot room, and the seatback reclines within a modest range. The second row flips and folds with one hand, to allow access to the third row. That third row can accommodate adults for short trips, but the seat lacks thigh support.

Cargo volume ranks among the best in this class. Second- and third-row seats fold to create a nearly flat floor. The single-piece third-row bench seat can be folded only from inside the vehicle, and only after the cushion is moved forward. If installed, the available third-row split folding seat can be folded down in an easy one-step operation from outside the tailgate area. Note that the automatic liftgate lacks a tailgate button for power closure. Aspens contain plenty of in-cabin storage, including a deep center console and large, useful console tray.