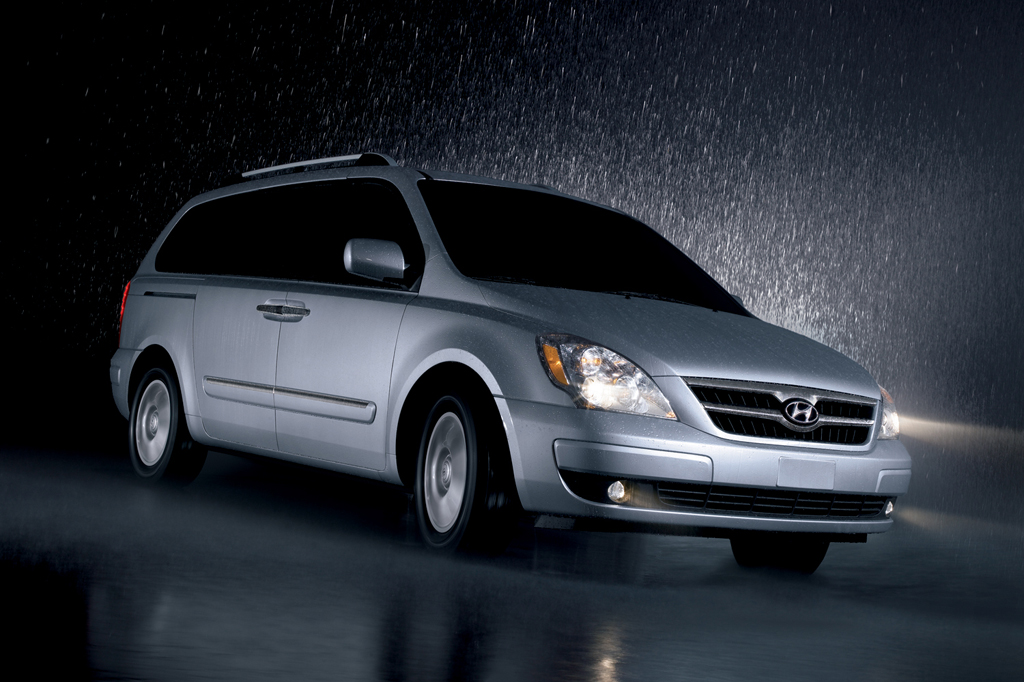 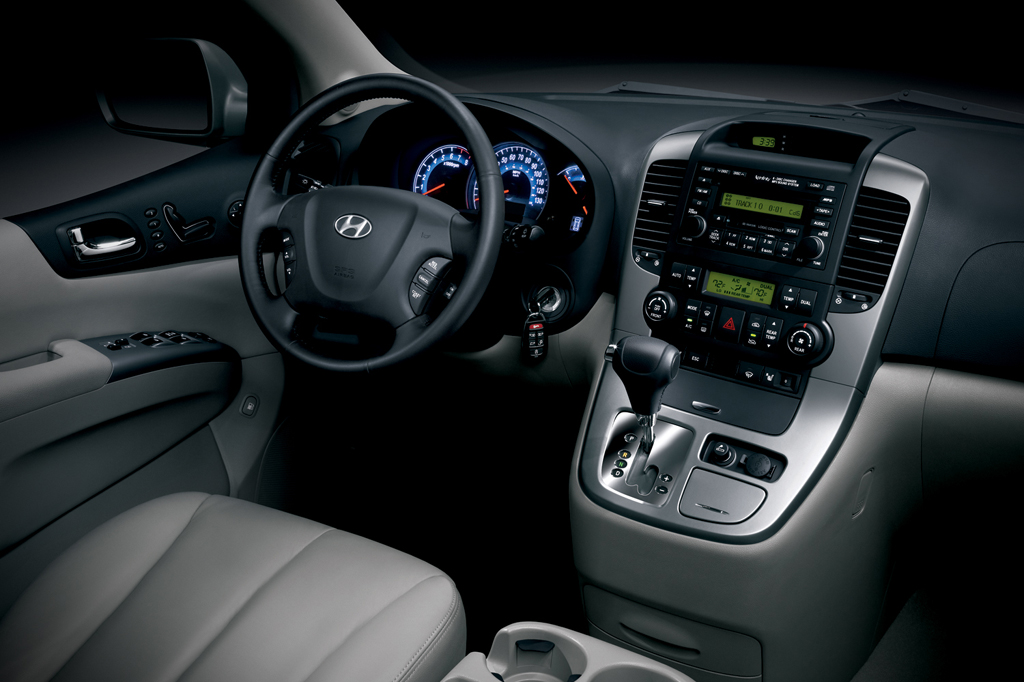 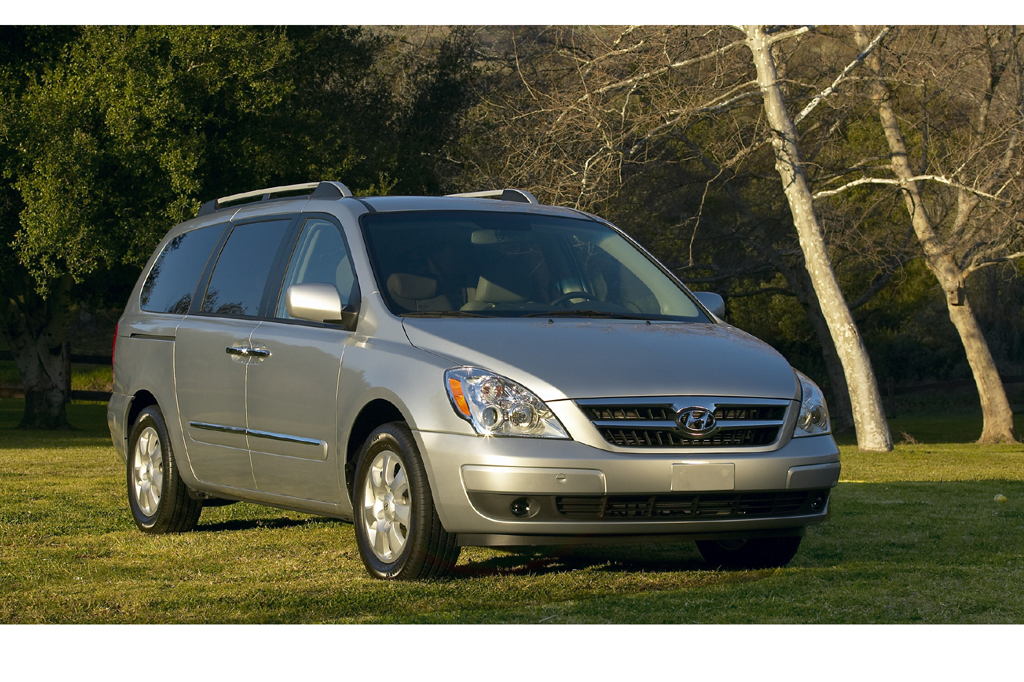 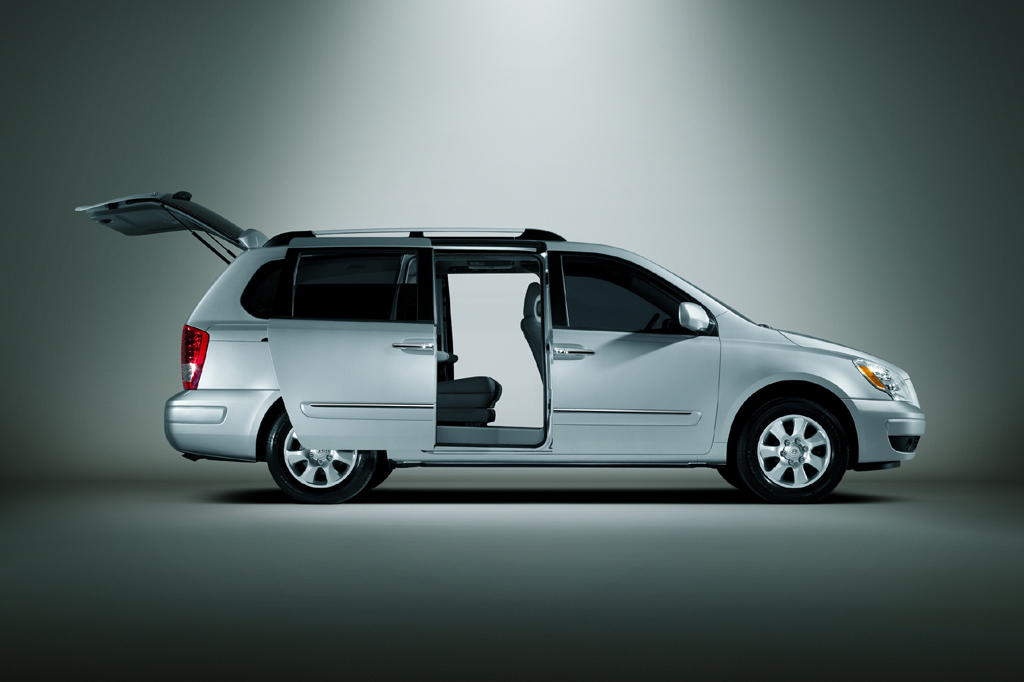 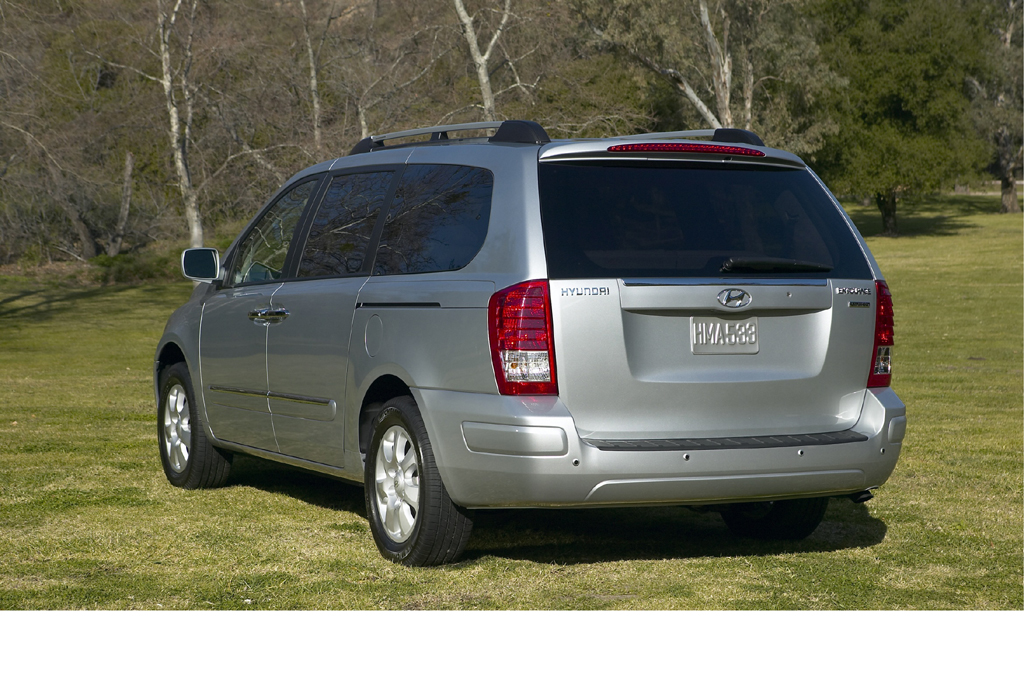 Entourage and the Kia Sedona, which shares its design, don’t run with our Best Buy minivans in terms of ride quality, powertrain response, or squeak-free construction. But they earn Recommended status for matching the class leaders in size, utility, and standard safety features. Warranty coverage is impressive, and they beat every comparably equipped rival on price when new. Resale values have not been strong, which should keep used-vehicle prices reasonable.

Hyundai’s first minivan carried seven passengers and had a third-row seat that folded into a floorwell. Front-wheel drive, like most minivans, the Entourage shared its basic design with the Kia Sedona; Hyundai was Kia’s corporate parent. Entourage styling touches echoed the newly-redesigned Hyundai Santa Fe SUV.

Entourage had a 242-horsepower V6 engine (later re-rated at 250 hp) and a five-speed automatic transmission, with a manual shift gate. GLS, SE, and Limited trim levels were offered. Second-row bucket seats slid fore and aft, and could be removed. The third-row “Hideaway” bench was split 60/40.

All-disc antilock braking, active front head restraints, a tire-pressure monitor, and traction/antiskid control were standard. Also standard were front side airbags and curtain side airbags, which covered all three seating rows. A foldaway center tray table between the front seats included four cupholders. All models had power windows in their sliding side doors. Dual power sliding side doors were standard on SE and Limited models. Leather upholstery, heated front seats, and a power tailgate were standard on the Limited. Also available were a sunroof, DVD entertainment, power-adjustable pedals, and rear obstacle detection. Rivals included the Dodge Caravan, Honda Odyssey, and Toyota Sienna.

Only one powertrain has been available for the front-drive Entourage: a 3.8-liter V6 engine, working with a five-speed automatic transmission.

EPA Note: Figures shown are for 2008 models. The Environmental Protection Agency changed its procedure for 2008 to yield more realistic estimates. Therefore, estimated mileage is lower than for prior years.

Acceleration is inconsistent. Entourage and its Sedona cousin are strong from a stop-a brisk 8.4 seconds to reach 60 mph in our testing. But rolling acceleration can seem sluggish, especially because the automatic transmission can be slow to downshift for extra power. It doesn’t always follow manual gear changes promptly, either.

Fuel economy is on the dreary side. Test Entourages and Sedonas have averaged 16.5 to 18.1 mpg in a mix of city/highway driving, and 19.2 to 22.7 mpg with more highway driving. Test Sedona averaged 16.1 mpg in mostly city use, including gas-eating acceleration tests. Hyundai and Kia recommend premium-grade fuel.

Comfortable riding for a minivan, the Entourage isn’t quite car-like. Generally composed, this minivan’s suspension smoothes out small bumps well, but it bounces somewhat over larger humps. The Entourage SE and Limited have 17-inch tires that make the ride a bit more jiggly over rippled pavement.

Steering/handling is typical for a large minivan: never nimble, with marked body lean in turns. Handling is not noticeably improved with 17-inch tires. Steering is nicely weighted, but feels numb. Traction/antiskid control is a welcome standard feature.

This engine emits a full-throttle growl, but is reasonably quiet otherwise. Tire thrum and some body rumble are noticeable even in around-town driving. Wind rush joins in at highway speeds. Some test examples of both Entourage and Sedona have annoyed with creaking interior panels, as well as rattling second- and third-row seats.

Entourage and Sedona share a dashboard with large, unobstructed gauges and clearly marked, nicely sized, easy-to-reach controls. Standard three-zone climate control is an upscale touch. Cabins are short on soft-touch surfaces and long on nondescript plastics; but materials are mostly in line with the vehicle’s price.

Comfortable chair-height seats give front-seat occupants ample headroom, though lanky drivers may want more rearward seat travel. Entry/exit is easy enough, though the second-row floor is a bit high. Thick windshield pillars can impede visibility to front corners, but clear sight lines are the rule elsewhere. Like some rivals, Entourage and Sedona have a flip-down center tray table that’s handy, but lets items slide around a lot.

Comfortable second-row seats offer adult-size headroom and legroom, even with front seats pushed fully back. The tight third row is adult-comfortable for short trips. Note that power-sliding doors were standard on the Entourage SE and Limited (optional only on Kia’s EX model). Whether powered or manual, some testers have said the sliding doors don’t open wide enough for best rear entry/exit. Bulkiness of folded second-row seats hampers access to the third row. Standard power sliding-door windows are a fresh-air plus.

Luggage space is excellent. A deep well behind the third-row seat is a useful cargo hold. Seat sections fold into it easily, for even greater space. Second-row seats tumble and fold for generous load volume. They can also be removed, but weigh 60 pounds each. Plenty of cubbies are provided for small items.