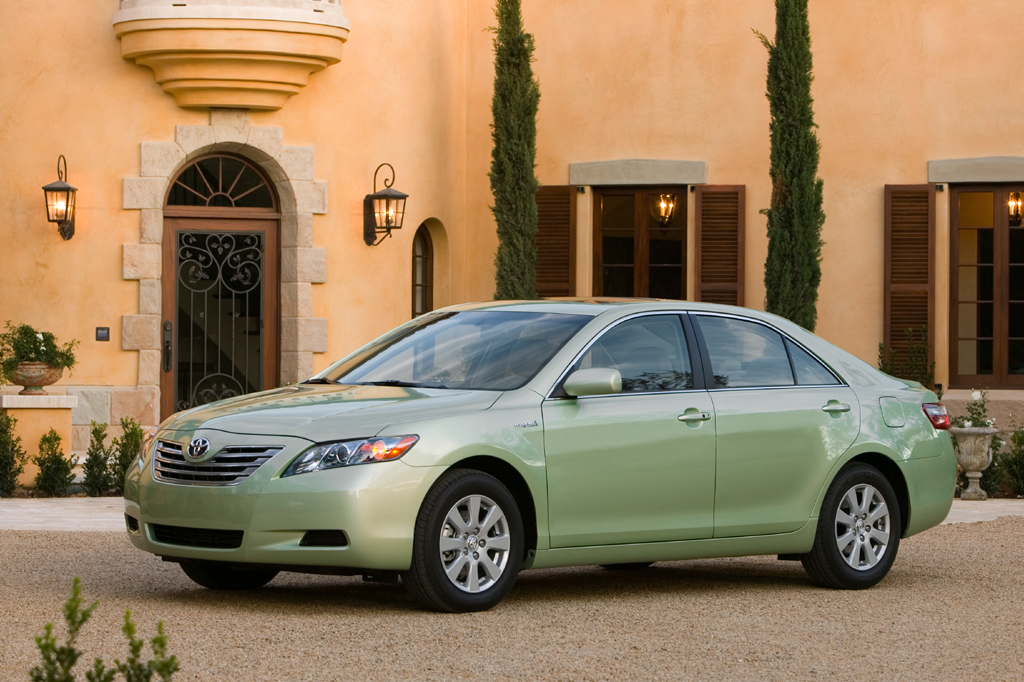 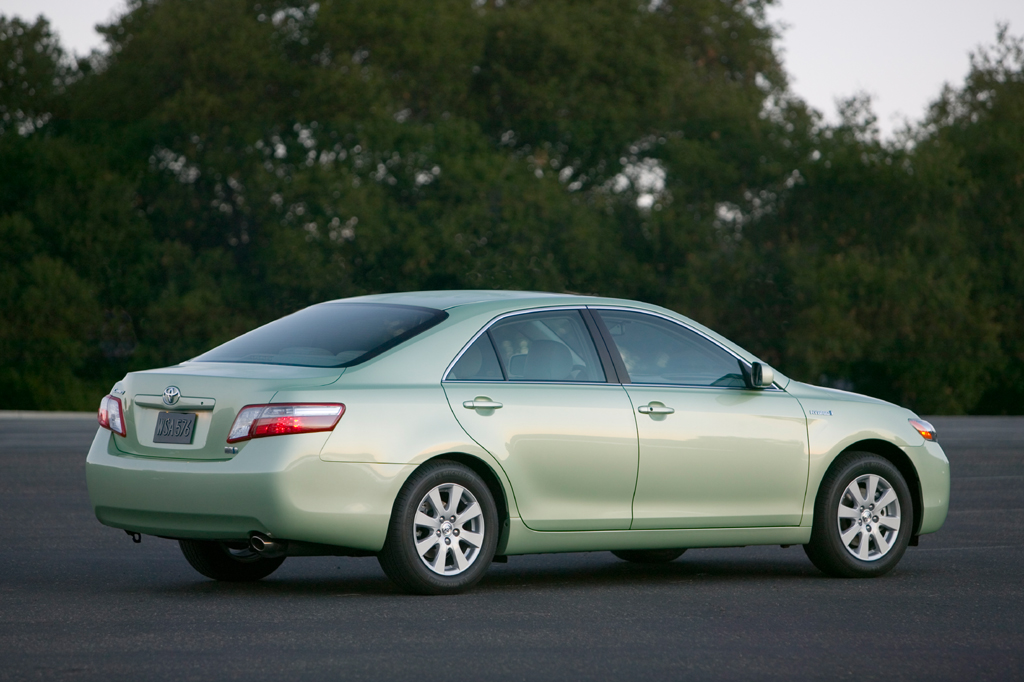 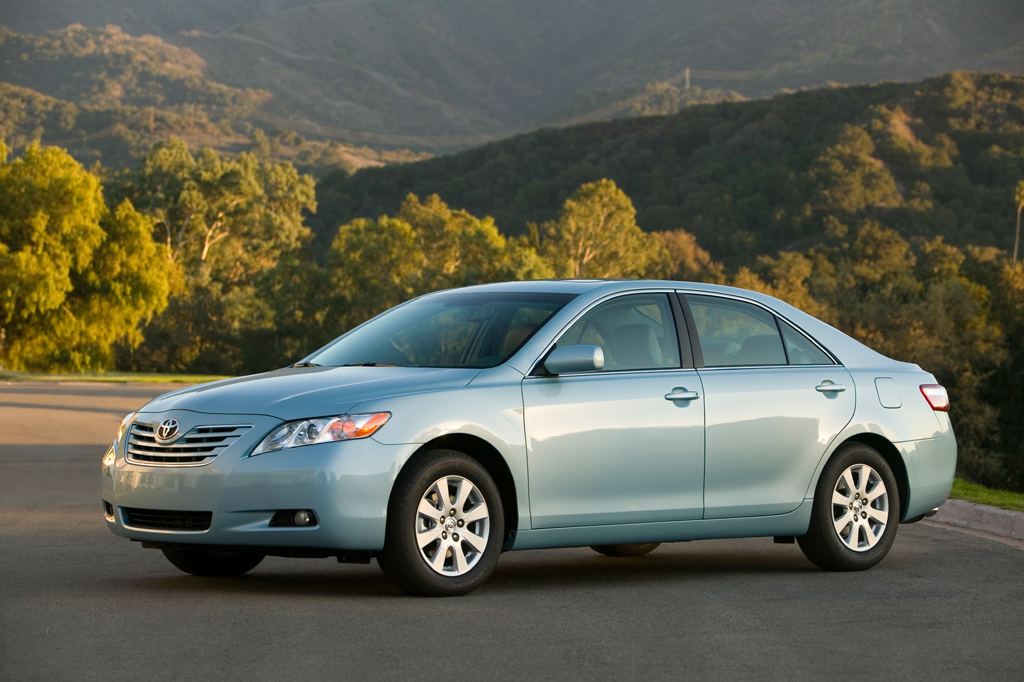 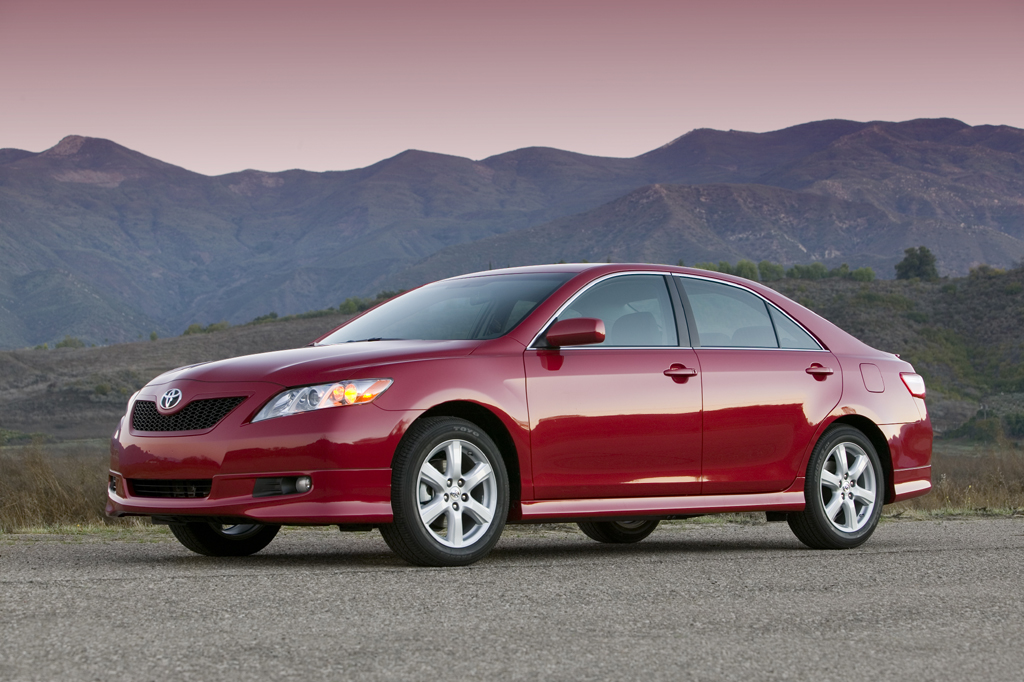 Camry is a perennial favorite among midsize cars, and the redesigned 2007s improved on a winning formula. This is still no excitement machine–not even the sporty SE version. Worse yet, recent test examples have suffered uncharacteristic lapses in materials and workmanship. Even so, every Camry continues to be a class benchmark for powertrain, chassis refinement, and passenger comfort. Toyota’s record of strong resale value keeps used-Camry prices on the heftier side.

America’s best-selling car was redesigned for 2007 with new styling, more power and features. For the first time, a gas/electric hybrid model was offered. Still midsize with front-wheel drive, Camry’s overall length was unchanged versus the 2002-2006 generation, but wheelbase grew by 2.2 inches and height decreased an inch. Curtain side airbags were now standard instead of optional.

The Hybrid teamed a four-cylinder gas engine with a battery-powered electric motor for 187 horsepower. Like Toyota’s other hybrids, it could run on one or both of its power sources, depending on driving conditions, and required no plug-in charging. Hybrids used a continuously variable automatic transmission (CVT).

Antilock braking was standard on all Camrys. So were front side airbags, curtain side airbags, and for the first time, a driver’s knee airbag. The Hybrid added traction/antiskid control, which was available for other models. SEs had a firmer suspension and, like the Hybrid, specific interior and exterior trim. A split-folding rear seat was standard except in the SE, which had a center pass-through. Leather upholstery was standard in the XLE V6 and optional for SE and four-cylinder XLE models. A navigation system with wireless cell phone link was optional for SE, XLE, and Hybrid models; so were heated seats. A newly available keyless entry/starting system was included in the Hybrid, and optional for the XLE V6. Competitors included the archrival Honda Accord, as well as the Nissan Altima, and new-for-2007 Saturn Aura.

Toyota’s four-cylinder Camry engine produced 158 horsepower, mating with a five-speed manual or five-speed automatic transmission. Only a six-speed automatic was available with the 268-horsepower V6 engine. In the Camry Hybrid, a 187-horsepower four-cylinder engine worked with batteries and a continuously variable transmission (CVT). For 2010, Camry was available with a new 2.5-liter 4-cylinder engine, which replaced a 2.4-liter engine.

Four-cylinder Camrys furnish adequate go-power with either transmission. A test LE automatic accelerated to 60 mph in 10.1 seconds. However, they feel taxed with automatic when attempting quick acceleration in the 35-55 mph range. V6 versions are impressively strong in all situations. A test XLE V6 reached 60 mph in a brisk 6.2 seconds. The V6’s six-speed automatic transmission is sometimes hesitant to kick down for passing power.

Hybrids are sleepy on takeoff, but build speed quickly. A test Hybrid accelerated to 60 mph in 8.3 seconds–markedly quicker than a regular four-cylinder model. Still, throttle response at low and midrange speeds lags as the CVT summons engine power.

Ride comfort is generally satisfying. All models are comfortably absorbent, even on severely cratered roads. On the down side, all but the SE suffer moderate float over large humps and dips at highway speeds. With its firmer suspension, the SE has better body control, but thumps a bit more over sharp bumps on its 17-inch tires.

Camry’s are confident and predictable at moderate speeds, but (except for the SE) spoiled by marked cornering lean from their comfort-biased suspensions. SEs lean less, and feel more composed at speed. Other models feel slightly clumsy in fast turns. Steering on all but the Hybrid is accurate and responsive, if a bit overboosted and numb (in the opinion of some testers). Hybrid steering also lacks feel, and has inconsistent boost and delayed response. One test Hybrid suffered an alarming creaking noise from the steering column during cornering. Brakes provide smooth, ample stopping power.

Wind rush is most noticeable at highway speeds. Tire thrum annoys on coarse pavement. Four-cylinder engines, including the Hybrid’s, suffer moderate high-rpm roar but are otherwise unobtrusive. The silken V6 is very quiet in all but full-throttle acceleration, though one test model suffered from a rough idle.

Toyota’s usual large, legible gauges are accompanied by a control layout that’s logical after brief acclimation. Legibility is good in daylight, but uneven backlighting at night makes instruments harder to decipher. The Hybrid replaces other models’ tachometer with an unhelpful “power” gauge and has a center dashboard screen for displaying power-flow and fuel-economy data. The climate display panel becomes difficult to read in bright light. Toyota’s available navigation system is intuitive, but absorbs and complicates some audio functions. Cabin materials are generally solid and serviceable, with many soft-touch surfaces and tasteful faux metal or wood trim. Sadly, many test cars have disappointed with unsightly seams, misaligned plastic panels, and assorted squeaks and rattles.

Front headroom is six-footer adequate, even beneath the sunroof housing. Occupants enjoy fine legroom on well-shaped, comfortably padded seats. The steering wheel telescopes as well as tilts, helping to fine-tune the driving stance, complemented by ample seat settings. Styling slightly impedes visibility aft and to the right-rear, but sightlines are clear elsewhere.

Rear seats offer ample legroom and knee space even for six-footers. Headroom is less generous, but acceptable. So is cabin width for three-abreast travel. The seat cushion isn’t long enough for best support. Entry/exit is easy despite slightly narrow thresholds.

All models have usefully shaped trunks, though sickle-shaped lid hinges intrude and the trunk opening is too small for really bulky items. Note that the Hybrid has only 10.6 cubic feet of trunk volume, versus 15 in other models. All except the SE and XLE have folding rear seatbacks with handy in-trunk releases. SE sedans have a fixed seatback with center pass-through. The XLE 40/20/40 folding seatbacks, with manual recline feature, also have a pass-through. Cabin storage is ample in all models.