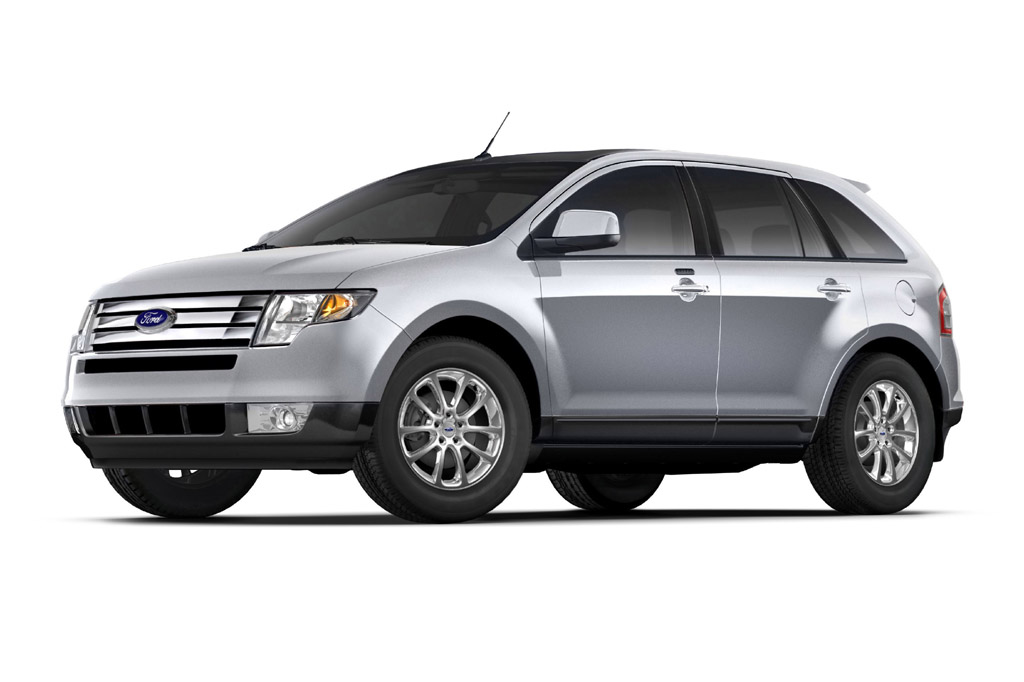 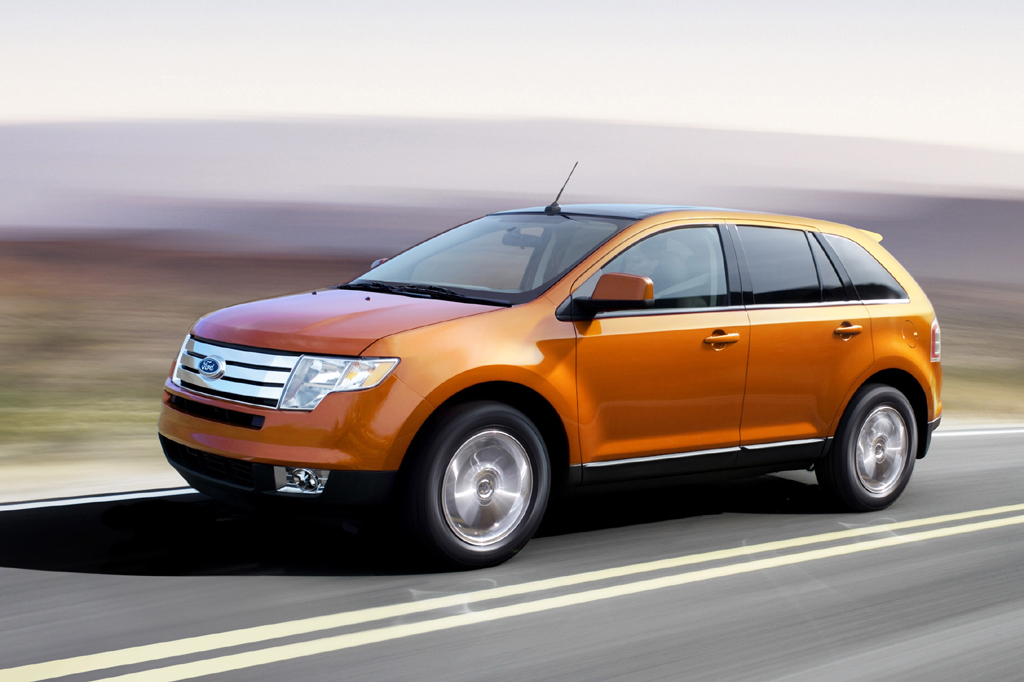 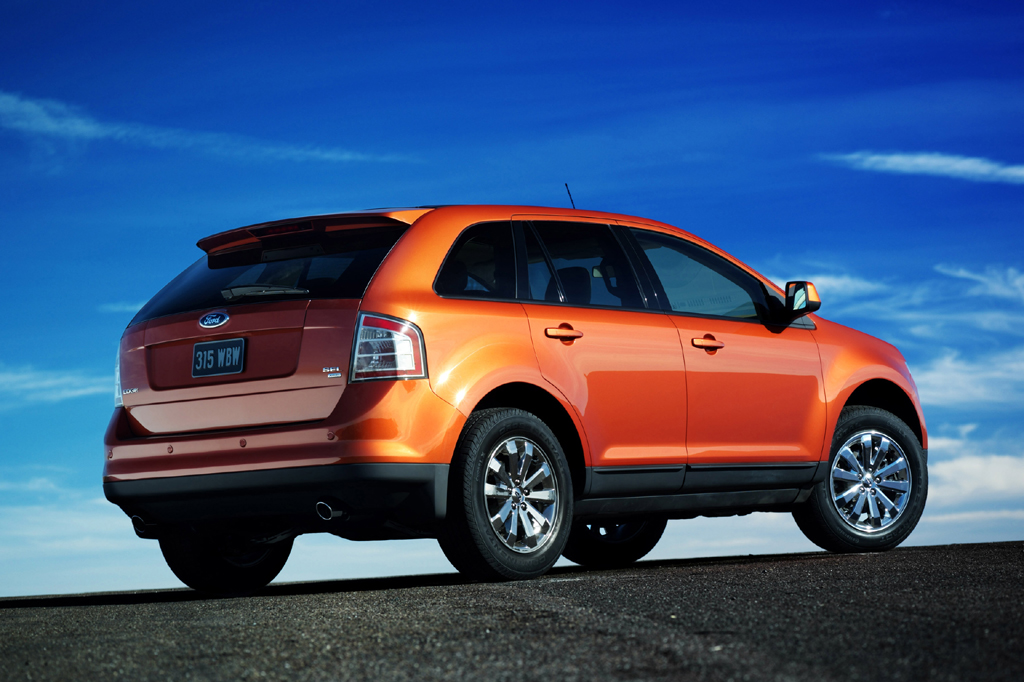 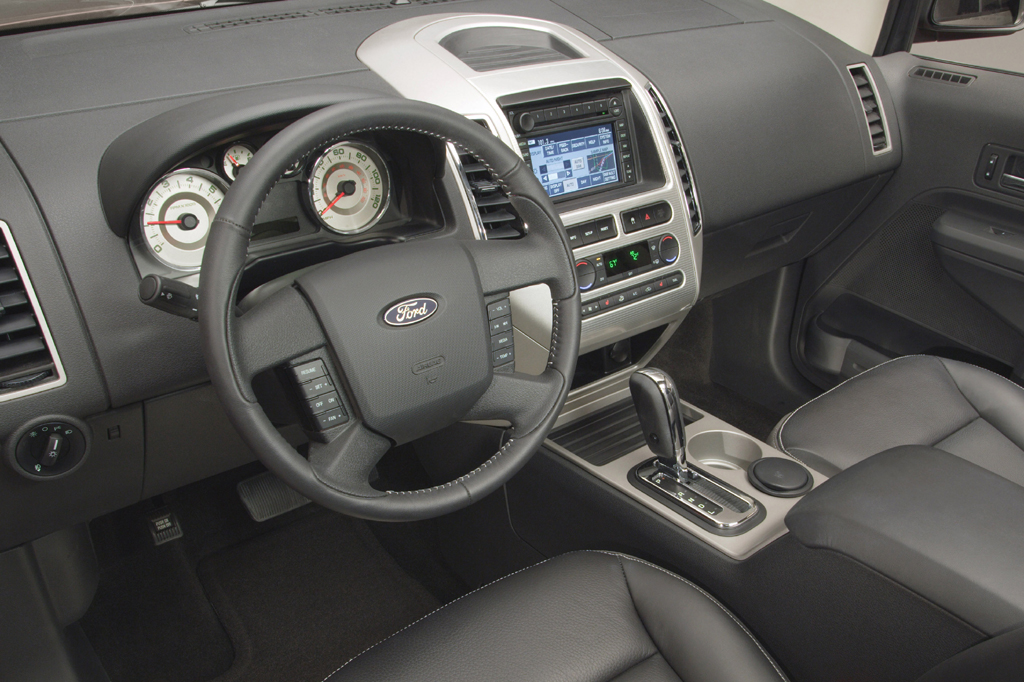 Ford Motor Company had a lot riding on the success of its newest crossover SUV, and the Edge impresses for its responsive powertrain, car-like ride, and generous passenger and cargo room. New-car base prices have been competitive, but quickly escalated with options. Give Edge a look, but consider an SE model or a judiciously equipped SEL for the best dollar value.

Ford introduced a new car-type midsize crossover SUV for 2007, a five-passenger wagon based on the same platform used for the Fusion sedan. The new Edge came in SE and SEL models. Both could have either front-wheel drive or all-wheel drive (without low-range gearing). The sole powertrain was a 265-horsepower V6 and a six-speed automatic transmission.

Antilock braking and traction/antiskid control were standard, along with front side airbags and curtain side airbags, which included rollover sensing. Optional for the SEL was Ford’s panoramic Vista Roof-a sliding glass sunroof over the front seats and a fixed rear panel. Other SEL exclusives included an optional navigation system, DVD entertainment, leather upholstery, and 18-inch wheels.

Second-row 60/40-split reclining seats folded to make a level load floor. With the front passenger seat folded, an Edge could hold items up to 8 feet long. Rear seats folded using a one-hand manual release or an automatic remote release, accessible from the cargo area. A laptop computer fit into the front console, and an MP3-player jack was provided. Each Edge contained 20-ounce cupholders in front-door map pockets, plus what Ford called “super-size” cupholders in the console and rear armrest. Heated front seats were available.

Lincoln got a luxury-trimmed version of the Edge, called the MKX. Competitors for Ford’s Edge included the Honda Pilot, Nissan Murano, and Toyota Highlander, as well as the Saturn Outlook.

Early Edge wagons had the same powertrain: a 3.5-liter V6 engine developing 265 horsepower mated with a six-speed automatic transmission. For 2011, that engine was boosted to 285 hp, and a 305-hp 3.7-liter V6 was added for the Sport model. For 2012, a turbocharged 2.0-liter four-cylinder EcoBoost engine could be ordered in front-drive models. An Edge may have front-wheel or all-wheel drive.

1. EPA Note: Figures shown are for 2008 and up models. The Environmental Protection Agency changed its procedure for 2008 to yield more realistic estimates. Therefore, estimated mileage is lower than for prior years. 2. 18/26 w/AWD. 3. 17/23 w/AWD.

Whether 2WD or AWD, Edge wagons demonstrate good power from a stop. Ford’s claim of about 8.4 seconds to reach 60 mph with the 265-horsepower 3.5-liter V6 seems just about right. Linear throttle response and a smooth-shifting transmission make for trouble-free highway passing. The transmission is generally responsive, though one test example hesitated to downshift without a deep stab on the gas pedal. The EcoBoost four cylinder added for 2012 is surprisingly peppy, providing ample acceleration under all circumstances. We have had no opportunity to drive a Sport with the 3.7-liter V6.

Fuel economy is mediocre for this class, at least with the V6 engines. Test AWD models with the 3.5 averaged 15.4 to 18.0 mpg in a city/highway blend; a front-drive version averaged 19.6. However, we averaged a rather impressive 25.2 mpg on a 2012 Edge with the EcoBoost engine. All engines use regular-grade gasoline.

Ride quality is generally good. The Edge smothers large bumps better than many midsize crossover SUVs, even with the test examples’ optional 18-inch tires. Some test-drivers feel that slight floatiness over highway swells taints otherwise fine ride control. We’ve attributed some minor structural shudder over a few bumps to the Vista Roof on our test vehicles. Models with 17- or 20-inch tires have not been tested.

Steering is nicely weighted at highway speeds and in city driving. A softly-sprung suspension leads to body lean and tire squeal while taking turns at even moderate speeds. Brakes have somewhat long pedal travel, but deliver drama-free stops.

The Edge engine sounds gruff during full-throttle acceleration, though subdued while cruising and at idle. Some tire noise occurs on coarse surfaces, but not enough to be bothersome. Impressively little wind rush is evident. The optional Vista Roof has an integrated screen that blocks most wind roar, making normal conversation possible at highway speeds when the roof is open. However, in tilted position, it causes a lot of wind rush at highway speeds.

Easy-to-read gauges and handy, simple climate controls are bonuses, but the instruments do lack contrast in certain lighting conditions. The available navigation system absorbs most audio functions, but does not complicate their use. Operation of navigation and audio via the touch-screen or flanking pushbuttons requires a long reach by front-seat occupants. Hard plastics dominate the Edge’s cabin, but they don’t look cheap. Assembly quality appears fine.

Front riders benefit from ample legroom, on seats that are all-day comfortable. Even 6-footers have sufficient headroom below the Vista Roof (if installed). Chair-height seats and a low dashboard provide good overall visibility, though rear headrests partially block the view astern.

Rear legroom and foot space qualify as generous, on a supportive bench seat. If installed, the Vista Roof extends over the rear seat, but its housing has minimal impact on headroom–except for the very tall. The standard seatback reclines for added comfort. No-hassle entry/exit is another bonus.

Cargo space is bountiful, even with rear seatbacks raised. Despite a low deck, loading of bulky items is impeded by a step-down from the rear sill. Rear seatbacks do not fold completely flat, but conveniently drop forward, using (if installed) the pushbutton release located near the tailgate. Seatbacks have to be manually raised, however. An optional underfloor cargo tray would be useful for holding small items; Ford should have made it standard. Excellent cabin storage includes a large glovebox and a cavernous center console that can hold a laptop computer.