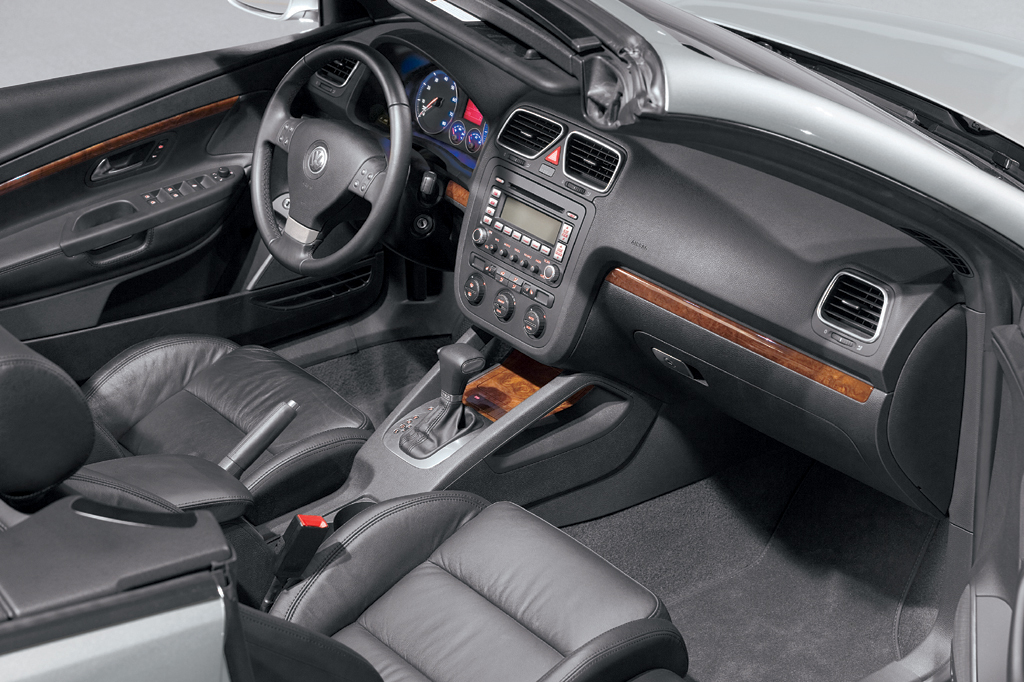 Eos’s strengths are its comfortable ride, fine handling, and the choice of open-air driving or hardtop security. Weaknesses include a tight rear seat and minimal cargo space. Overall, Eos bests its two main retractable-hardtop convertible competitors. When new, it started around $8,000 less than the Volvo C70, but delivers comparable performance. Eos is more solid and fun to drive than the similarly priced Pontiac G6 convertible. VW’s retractable hardtop has been holding its value rather well, so used-car prices aren’t likely to be bargains.

Volkswagen introduced a new four-passenger convertible for 2007, with a power retractable hardtop that included an integral sunroof. Based on the front-wheel-drive Jetta/Passat sedan architecture, the Eos shared the Jetta’s wheelbase but was almost 6 inches shorter, had two doors rather than four, and weighed almost 300 pounds more. Eos came in base, 2.0T, and 3.2 L models. Base and 2.0T models held a turbocharged 200-horsepower four-cylinder engine, while the 3.2 L got a 250-hp V6. A six-speed manual transmission was standard with the four-cylinder. A six-speed sequential manual transmission (SMT), called the Direct Shift Gearbox, was optional. Operating similar to an automatic, the SMT was the only transmission offered with the 3.2 L model.

Antilock braking, traction/antiskid control, and front side airbags were standard. Also standard were automatic rollover bars designed to deploy from behind the rear seats in the event of a tip over or collision. Available Luxury and Sport Packages added leather upholstery, upgraded trim, and larger wheels/tires. Sport Packages included a firmer suspension. A navigation system and rear obstacle detection also were offered. Primary rivals were the Pontiac G6 convertible and Volvo C70–both retractable hardtop coupes.

When equipped with the turbocharged 200-horsepower four-cylinder engine, an Eos could have either a six-speed manual or six-speed sequential manual transmission (SMT). Only the SMT was offered with Volkswagen’s 3.2-liter V6 engine, which produced 250 horsepower. For 2009, Eos lost the VR6 version with its V6 engine, meaning all models now carried a 200-hp turbocharged 2.0-liter 4-cylinder.

Turbocharged models are satisfyingly quick, particularly in the 45-65 mph range. However, that engine runs out of steam at high rpm, so judicious shifting with the manual transmission is required during passing. With the V6, an Eos has ample passing power, but is plagued by low-speed throttle lag. Working with either engine, the SMT can be slow to downshift in standard drive mode, but is alert in Sport setting.

On the road, an Eos is stable and composed, with no float or wallow. Even on rough pavement, the suspension is generally compliant. Sharp bumps can pound through if 17- or 18-inch tires are mounted.

Communicative steering helps give the Eos a high score for handling. This retractable-hardtop corners with grippy assurance and little body lean. Cowl shake is nonexistent with the top up, and only slightly worse with the top down, indicating a solid structure. Models with a sport suspension, and the VR6, have slightly sharper moves.

Both engines are smooth and subdued. Some testers have complained of rear-tire roar on coarse pavement, especially with either Sport Package. Top-up, test cars have suffered from a few minor squeaks and noticeable wind noise. Top-down, wind rush is the usual convertible irritant, though the windshield header screen helps direct air over front occupants.

Clear gauges complement mostly handy, intuitive controls. Eos’s high-quality interior has many soft-touch surfaces. The available navigation system absorbs some audio controls, complicating their use; but climate controls are separate. VW’s easy-to-use top raises and lowers in about 20 seconds at the push of a button; it includes a heated-glass rear window. The large integral power-opening sunroof is a unique touch. Some test models have suffered a few squeaks where the top connects to the windshield.

Front occupants get good headroom and legroom, though some testers have said high doorsills and low seat position contribute to a tub-like feel. Seats are supportive with firm side bolstering for lateral stability–especially those included with a Sport Package. The standard tilt/telescoping steering wheel helps with driver comfort. With the top up, rearward visibility is hindered by headrests and the small rear window.

Rear occupants can expect decent legroom if front seats are well forward, but with the top raised, headroom is minimal even for shorter adults. Front seats slide quickly forward to ease entry/exit, but getting in or out of the backseat with the top up requires the usual coupe contortions.

Trunk volume is small with the top raised, and the hardtop folds into the trunk, cutting space even more. With the top down, there’s enough room for a couple of duffel bags, but thicker suitcases and golf bags won’t fit. Eos’s cabin would benefit from more small-item storage–especially the base models and cars equipped with the navigation system. Base models have lacked a center console, and installing a navigation system moved the six-disc CD changer to the console, eliminating its storage capacity.