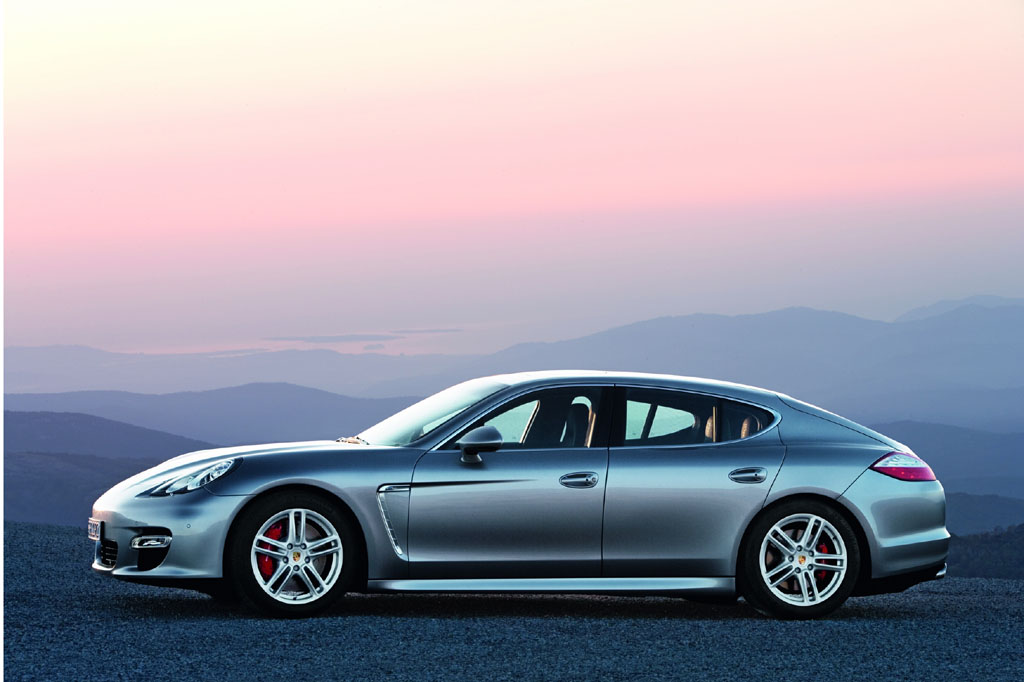 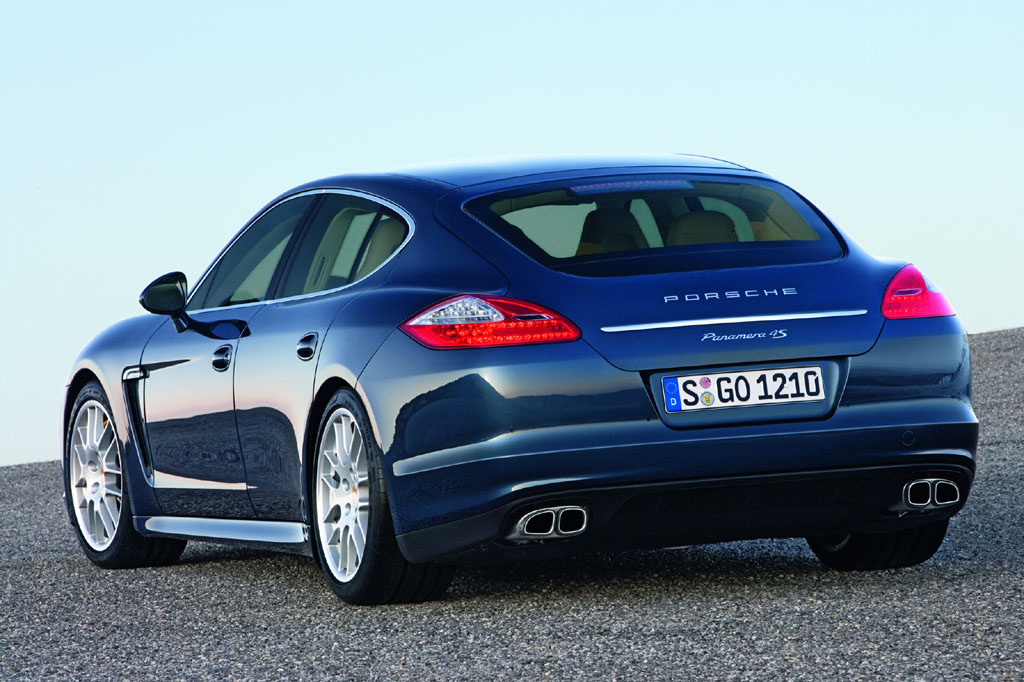 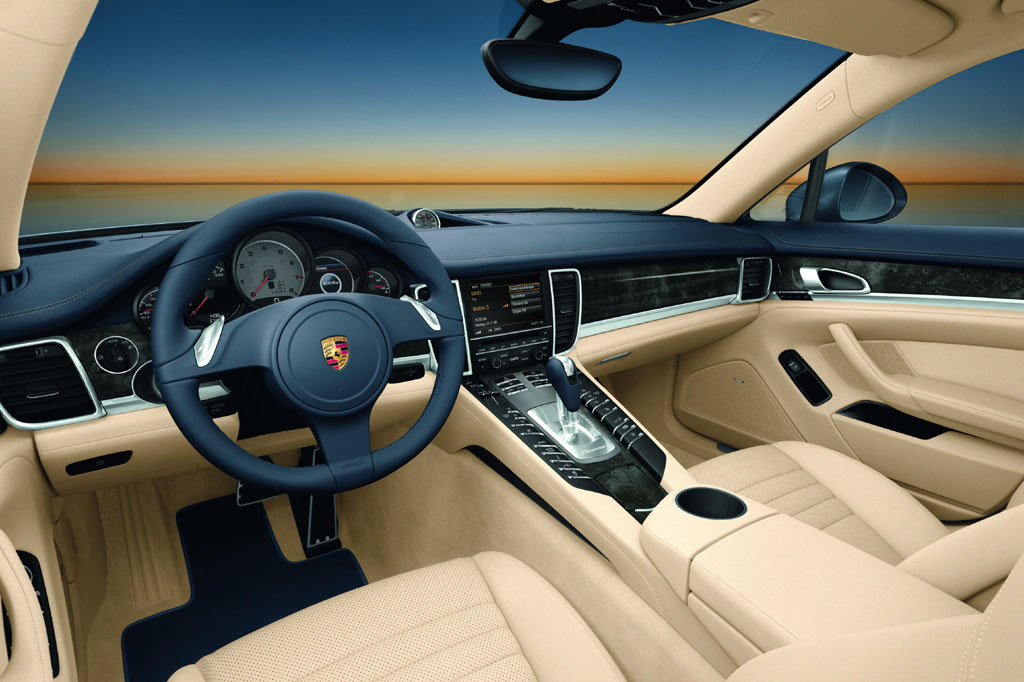 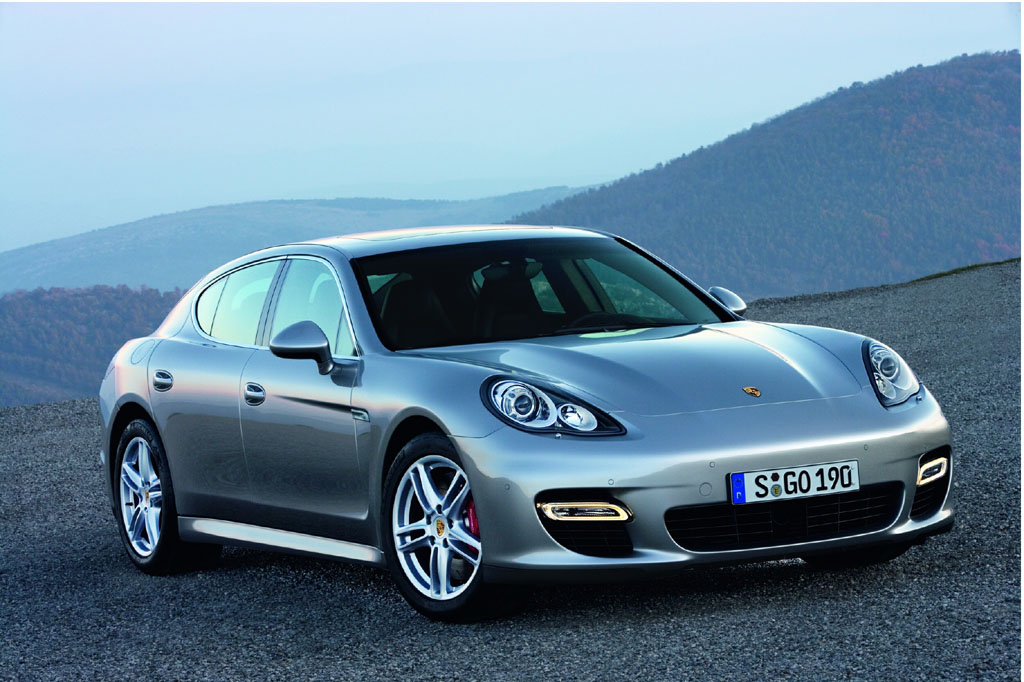 Porsche predictably aimed for the sporty side of the luxury-car market and certainly hit its mark. The Panamera also scores points for its cargo versatility and passenger room/comfort. However, some compromises go along with Panamera’s performance. For one, its low build sometimes makes getting in and out a hassle. While it eschews an “all-in-one” control interface (a la BMW or Mercedes-Benz), Panamera’s dashboard workings take a bit of acclimation. Still, for folks who would otherwise own a sedan, an SUV, and a sports car but have only one garage space, this Porsche might be just the car to fill it. Our nod goes to the V6 Panamera and Panamera 4. Not only are they the least-expensive models, they also offer the best balance of power, handling, ride quality, and luxury.

The 2010 Porsche Panamera debuted as a large, four-passenger, four-door hatchback–quite a contrast to the long succession of Porsche two-door coupes and cabriolets. Rear-wheel-drive S and all-wheel-drive 4S and Turbo models were offered. All used a front-mounted 4.8-liter V8 engine and seven-speed dual-clutch automated-manual transmission that behaved much like an automatic. S and 4S models had 400 horsepower, while the Turbo generated 500 horsepower. Standard safety features included all-disc antilock braking, traction control, an antiskid system, curtain-side airbags with rollover sensing, front- and rear-side airbags, and front-knee airbags. All models had an engine stop and start feature that shut off the engine when the car was stopped and restarted it when the brake pedal was released. Also standard was a rear-obstacle detection system. An adaptive air suspension was standard on the Turbo and optional on the S and 4S. Other available features included four-zone automatic climate control, heated and ventilated front and rear seats, a split-folding rear seat, a rear refrigerator, steering-linked bi-xenon headlights, adaptive cruise control, and DVD entertainment. With the Panamera, Porsche competed against the Audi A8, BMW 7-Series, Jaguar XJ, and Mercedes-Benz S-Class.

Porsche claimed 0-60 mph acceleration times of 5.2 seconds for the S, 4.8 for the 4S (due to the superior off-the-line traction of its all-wheel-drive system), and 4.0 for the Turbo. With the V6, the times are 6.0 seconds with rear drive and 5.8 with AWD. Shave about 0.2 seconds on cars equipped with the optional Sport Chrono Package, which includes driver-selectable controls for throttle and transmission response. Those figures seem a bit optimistic. With a V8, the transmission doesn’t always kick down promptly for passing, though power is ample once it does. Normal acceleration from a stop is smooth; but especially in all-wheel-drive models, full-throttle acceleration is accompanied by a brief hesitation followed by a couple of jerking motions within the first 50 feet. The transmission seems better behaved with the V6, with immediate response in any situation. Normally, the Panamera starts off in second gear. If you floor the throttle from a stop, the transmission takes a moment to shift down to first before the car launches, and then there’s a driveline jerk or two. First gear can be set from a stop by manually overriding the transmission with the floor shifter or steering-wheel paddles. The engine start/stop feature works smoothly. We have had no opportunity to drive a turbocharged V8 model or a hybrid.

On all Panamera models, the ride is composed but firm in the Teutonic tradition. Most bumps are well absorbed with very good body control. S and 4S models came standard with Comfort and Sport suspension settings.

Switch to Sport mode and the suspension firms further to provide sporty handling. At least with the V8, however, the Panamera is too large and heavy to really feel sports-car agile. Due to their lower curb weights, V6 models feel more nimble, driving more like smaller cars than they really are. Strong brakes provide impressive stopping power.

Wind and tire noise are well controlled at highway speeds, and the engine revs with a muted growl. Some Panameras are equipped with a Sport exhaust system, which removes the “muted” under full-throttle acceleration to emit a prominent, raspy tone.

Whereas most cars in this segment have adopted joystick controllers linked to a dashboard screen to perform the myriad adjustments now common in luxury cars, Porsche went with individual buttons and a touchscreen display. There are plenty of buttons, but in most ways, they’re far quicker to actuate. However, they’re not always logically grouped, and some audio functions are not intuitive. Straight ahead of the driver is a large tachometer, but the speedometer is rather small and mounted to the left side of the instrument panel, out of direct line of sight. As in all Porsches, the ignition switch is on the left side of the dashboard. Interiors are richly appointed with fine materials and plenty of padded surfaces. An Alcantara headliner and wood trim have been standard on the Turbo and optional otherwise. Also offered was aluminum and carbon-fiber trim. All versions have an expensive look.

Up front, there’s plenty of room for adults on comfortable seats that might be equipped with heating and ventilation. But since the Panamera sits lower than most competitors, the seats are closer to the ground, which can make for difficult ingress and egress, particularly for taller folks. When opened, the doors have no detents; instead, they simply hold in whatever position they’re placed–a really handy feature. Power operation for the tilt and telescopic steering wheel has been available, but that feature really should have been standard at this car’s price level. Visibility is hindered to the front, sides, and rear corners by thick roof pillars, and the rear window is but a slit.

Rear bucket seats accommodate only two passengers, but they’ll be quite comfortable. Those seats may be equipped with fore/aft adjustment to alter the seatback angle. Another unexpected surprise might be the available heating and ventilation. Headroom and legroom are adequate for adults, but foot space can get tight if the seat in front is lowered. Ingress and egress are hindered by the low seating position and an intrusive wheelwell arch, but as in front, the doors will hold open in whatever position they’re placed.

The hatchback–unique in this class–offers a tall, wide opening, but the Panamera’s sloped roof steals some cargo space at the rear. The hatch lid is powered and its opening height can be adjusted–handy for the very short or tall. Seatbacks fold easily but not entirely flat. The interior features a fair number of storage bins and cubbies, although none are very large.