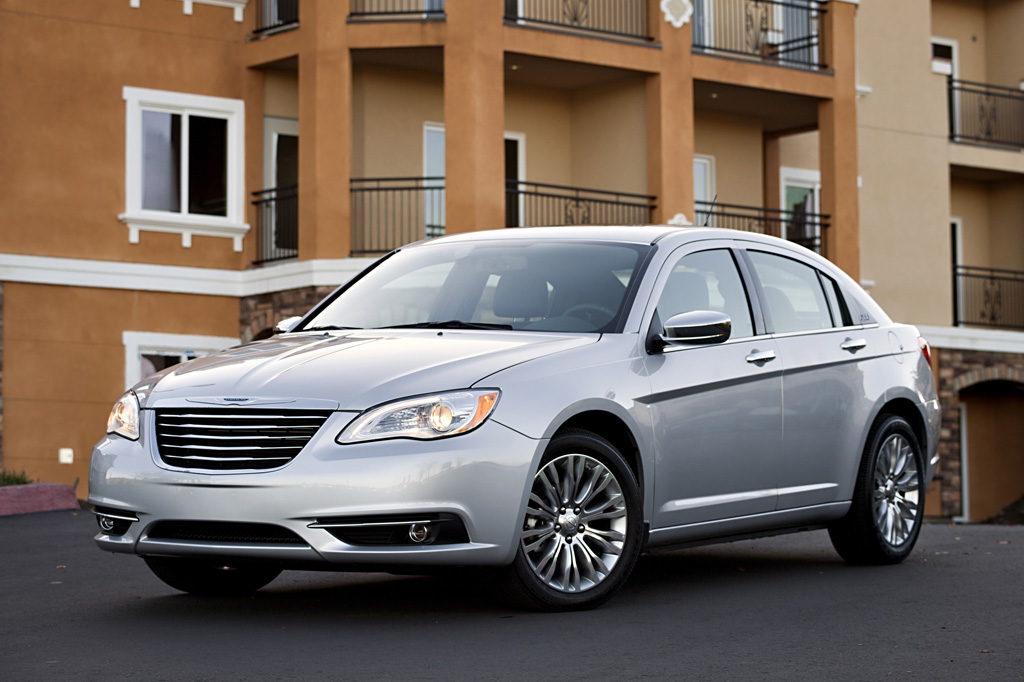 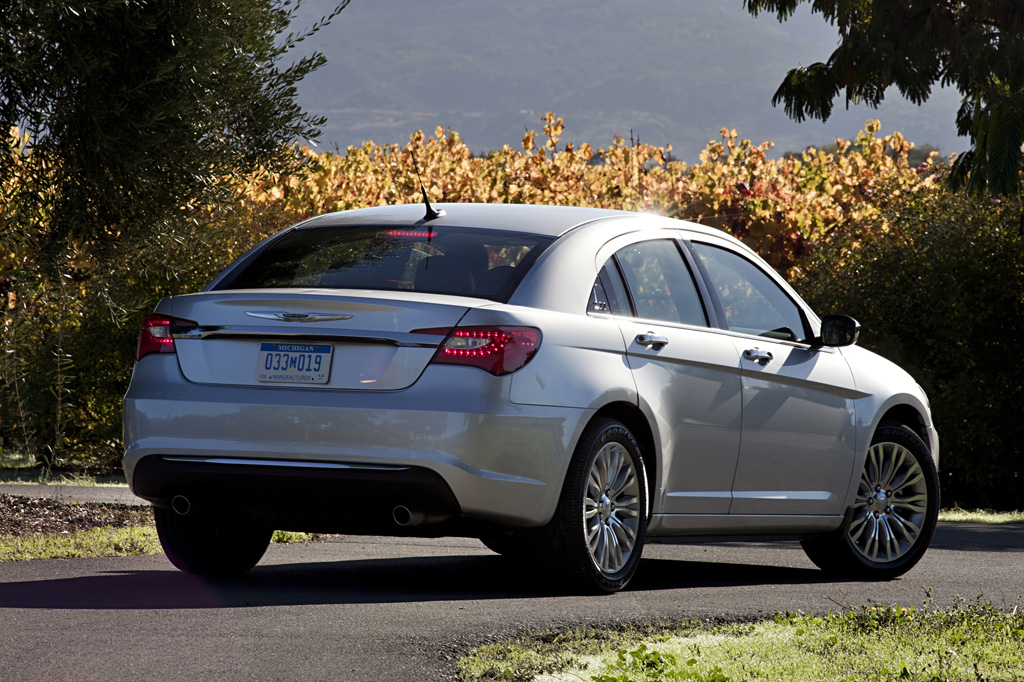 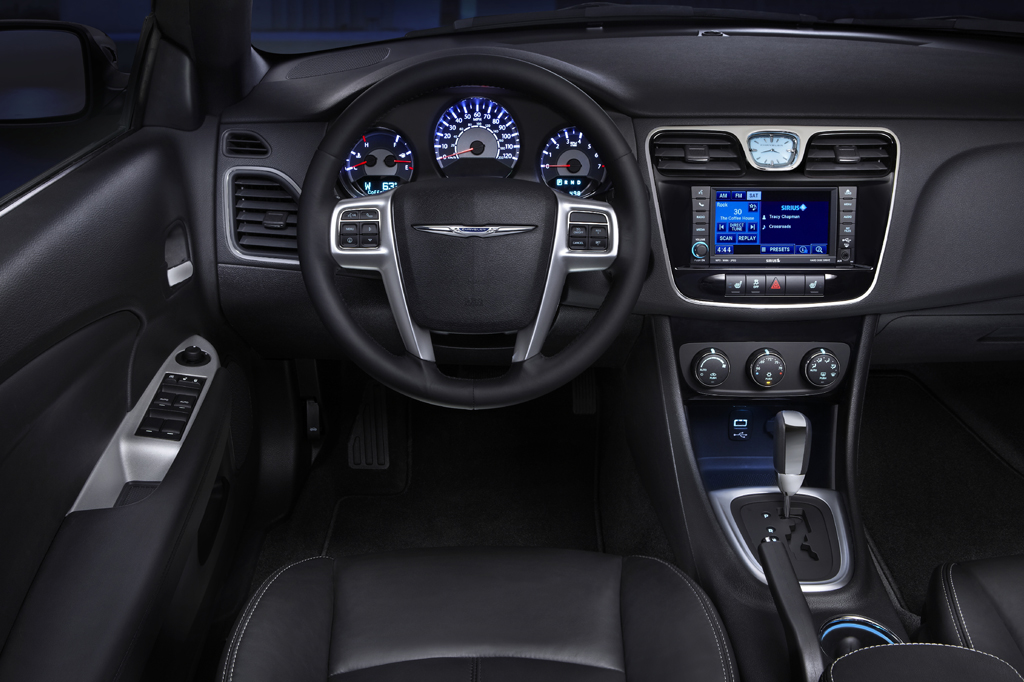 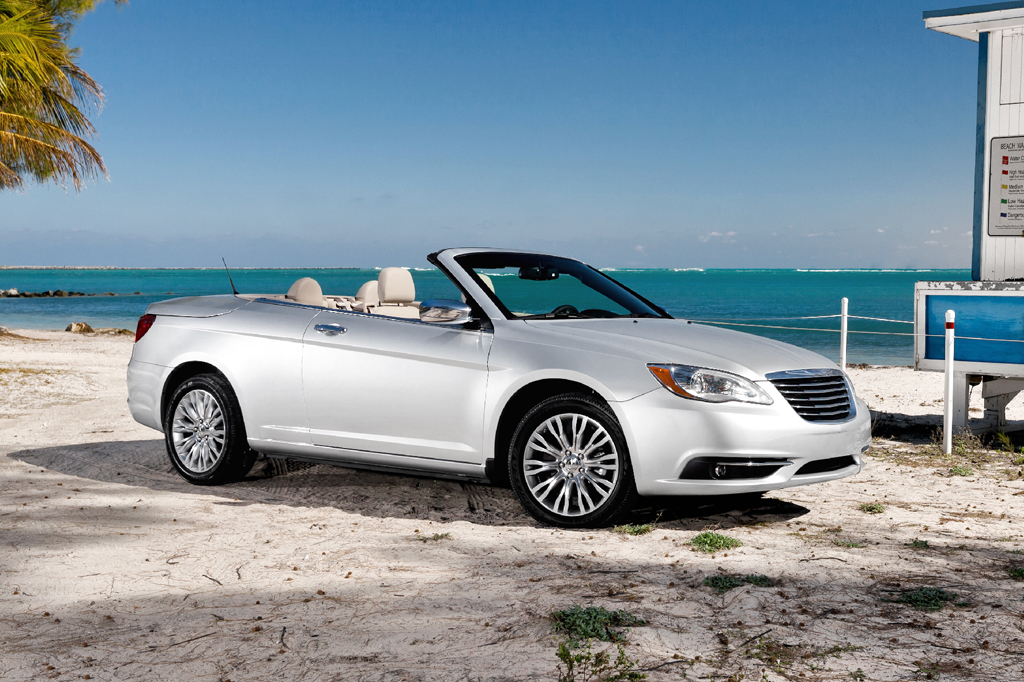 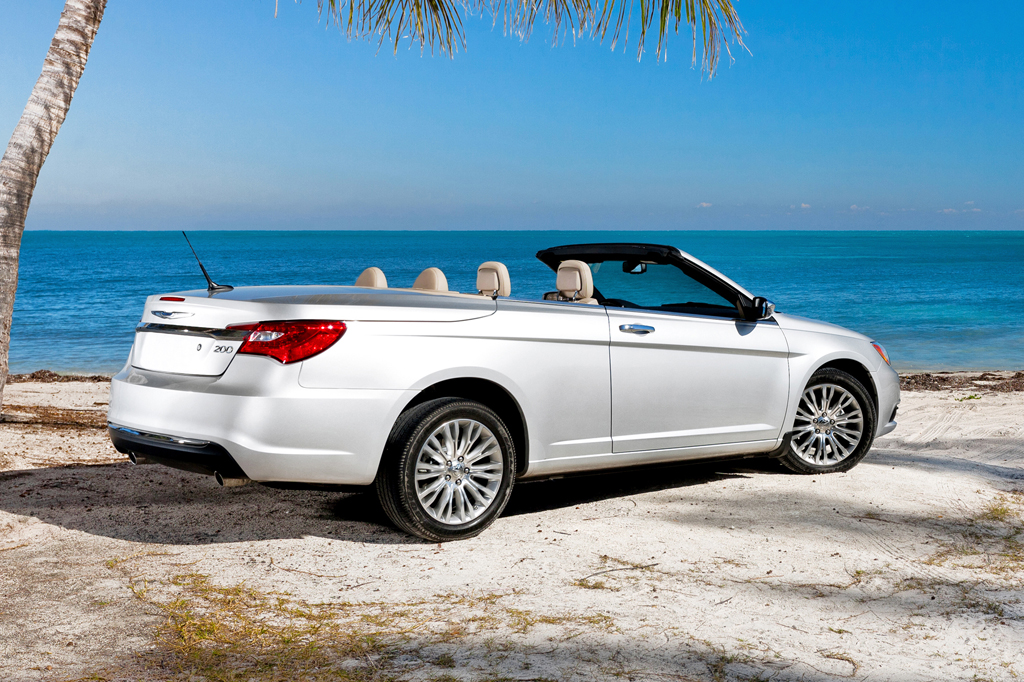 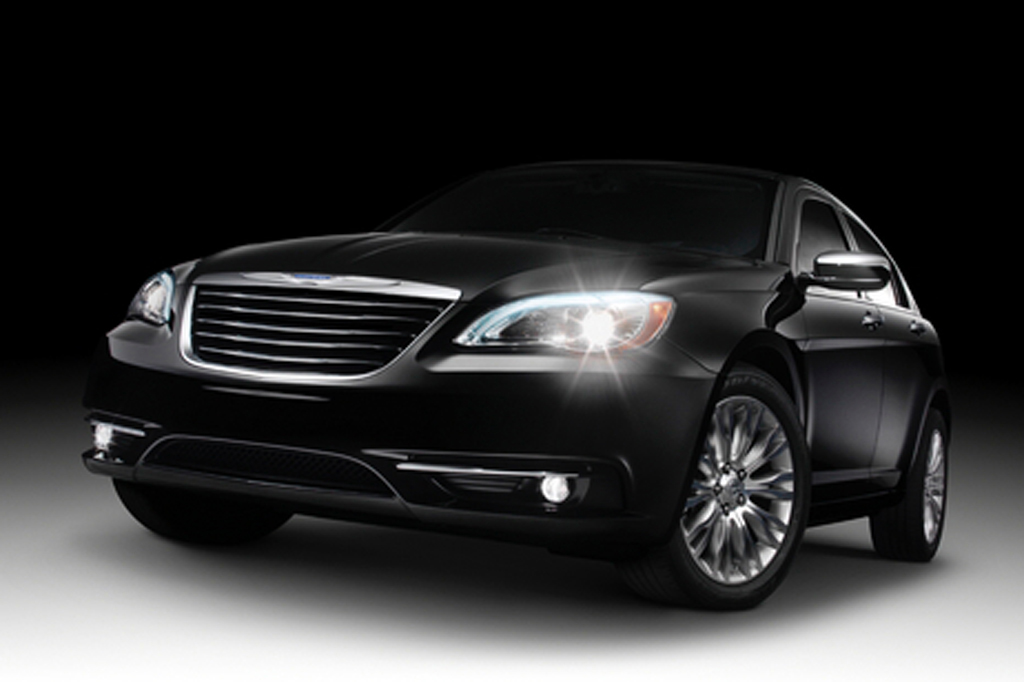 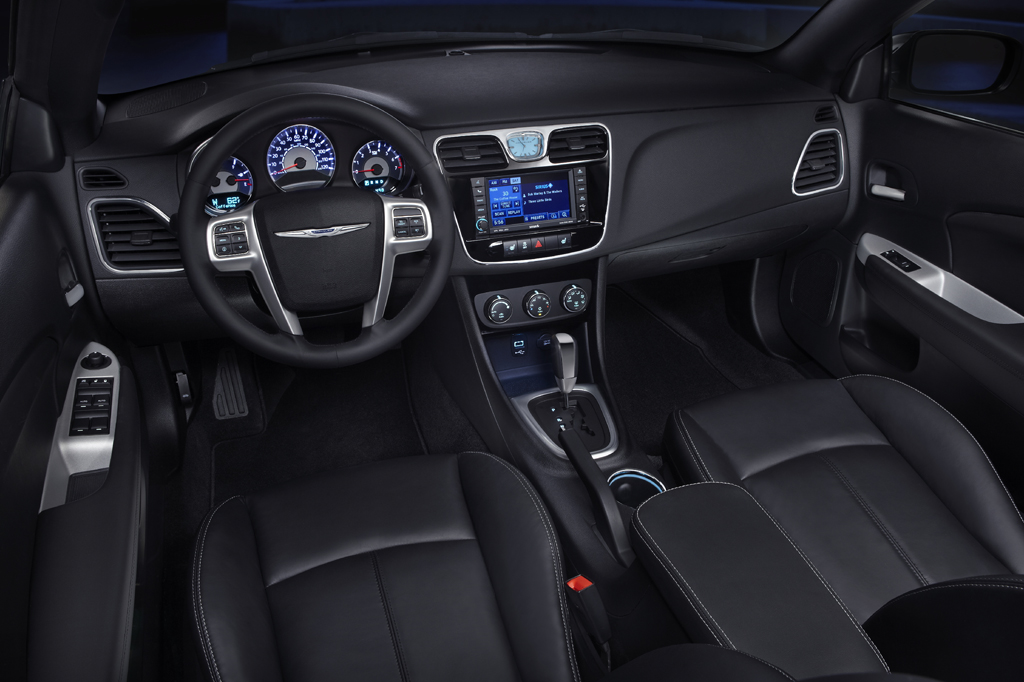 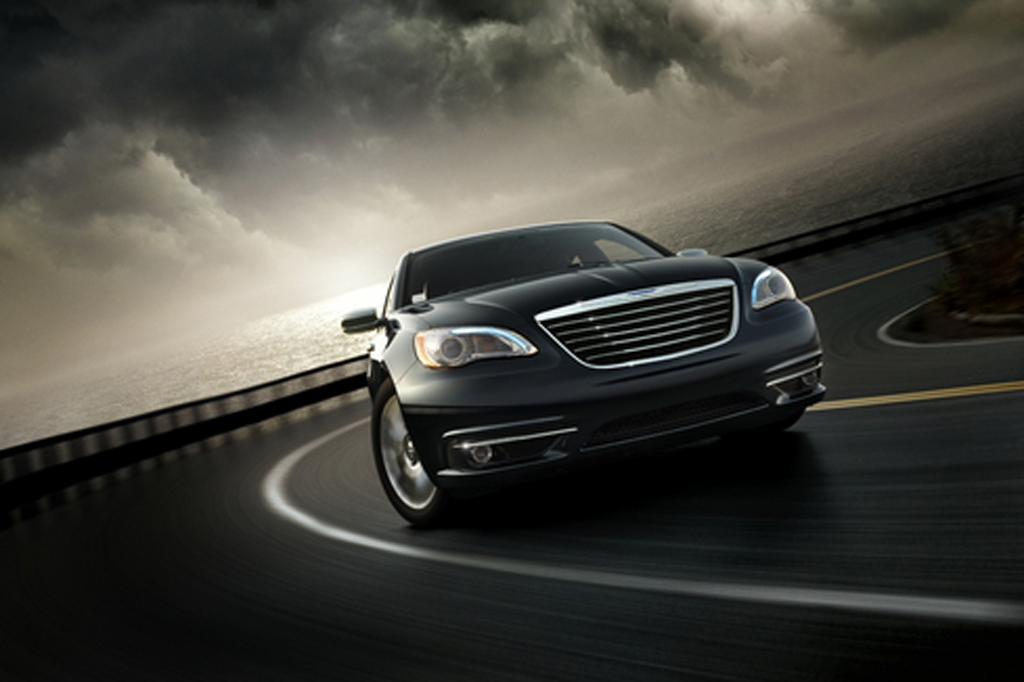 While the 200 might borrow some of its design from the often-panned Sebring, Chrysler made enough changes to this midsize duo, so they might as well be all-new cars. At least with the available V6 engine, the Chrysler 200 is powerful, smooth, and refined. The convertible appeals for its choice of a soft top or the all-weather security of a power-retractable hard top. Passenger and cargo room, especially in the sedan, disappoint when compared with others in this class. Overall, though, 200 is not easily dismissed, especially considering its aggressive pricing when new–which may translate to moderate purchase prices secondhand.

Launched for 2011, the Chrysler 200 was this brand’s new midsize car. Originally rumored as the Chrysler Nassau, the 200 came as a four-door sedan or a two-door convertible, sharing elements of its basic design with the now-discontinued Chrysler Sebring. Trim levels for the 200 sedan included LX, Touring, Limited, and S. Convertibles came in Touring and Limited form. Standard on all but the S and Limited convertible was a 173-horsepower, 2.4-liter four-cylinder engine. It teamed with a four-speed automatic transmission on the LX, and a six-speed automatic on the Touring and Limited. Optional on both Touring models and the Limited sedan (standard on the S and Limited convertible) was a 283-horsepower, 3.6-liter V6 paired with a six-speed automatic. That engine was capable of running on gasoline and/or E85 ethanol-blended fuel.

Standard safety features included all-disc antilock braking, traction control, an antiskid system, curtain side airbags, and front side airbags. Leather upholstery was standard on the Limited and S. Heated front seats, a wireless cell-phone link, and 30-gigabyte hard drive for storing digital-music files were standard on Limited and S models and optional for the Touring. A sunroof could be mounted on all but the LX. A navigation system was optional on the Limited. S versions got specific wheels and trim. Touring convertibles had the four-cylinder engine as standard, while the Limited soft-top held the V6 (which was optional for the Touring). All convertibles had a standard power soft top; a power-retractable hard top was optional on the Limited. Chrysler’s 200 sedan competed against the Buick LaCrosse, Ford Taurus, Kia Optima, Toyota Camry, and Honda Accord. Chrysler remained the only mainstream manufacturer to offer a traditional convertible, apart from Volkswagen’s Eos, so competitors had to come from the sporty and premium segments.

EPA estimate for four-cylinder convertible with six-speed automatic was 18/29 mpg.

Only Chrysler 200 models with the V6 engine have been available for testing. With a relatively trim size and class-leading horsepower, these cars accelerate swiftly but don’t overwhelm you, which is a benefit. Instead, power builds smoothly and steadily. Torque steer is well mitigated. The transmission generally works well, though one test car exhibited occasional clunkiness when shifting from 2nd to 3rd gear.

Consumer Guide has not yet had an opportunity to measure a 200, but a similar V6-powered Dodge Avenger averaged an impressive 26.7 mpg. Four-cylinder convertibles got lower EPA fuel-economy estimates than sedans. Both engines use regular-grade gas. The V6 can also run on E85 ethanol.

Ride quality is a virtue, helped by the new suspension installed on all 200 models. In conjunction with the Touring’s 17-inch wheels, the ride is commendably smooth. Ride with the Limited’s 18-inch wheels is firmer, but still comfortable. Bump absorption is good. Only sharp pavement breaks cause a shudder in the cabin.

Handling isn’t exceptional, but the Chrysler 200 isn’t a dullard, either. Steering feel is fine, and body control in turns is decent. The brake pedal on one test car had a slightly mushy feel, but it stopped straight and true.

The V6 engine roars (albeit not unpleasantly so) during acceleration, but fades away at cruising speeds. Most other noise sources are well suppressed. A bit of coarse-surface tire thrum is heard, but it’s not loud enough to be annoying. Top up, convertibles have a bit more wind rush at highway speeds, but not enough to be intrusive.

Switchgear on non-navigation cars is old-school Chrysler. Audio and climate controls are mounted high on the dashboard and are easy to operate.

Detail work is a vast improvement over the departed Sebring. Though appearance is a bit bland in mainstream Touring trim, materials quality and fit/finish are very good. The Limited is dressed up with leather seats. Padded surfaces and soft-touch materials, which were non-existent in the Sebring, are abundant in the 200. The only significant letdown is switchgear that some testers felt was a bit cheap, which is not surprising considering that most of it carried over from the 200’s predecessor.

Without the optional sunroof, at least, front headroom is generous. Legroom is fine for the class. Overall dimensions of the 200 are largely unchanged from the Sebring, which means cabin width is more on par with compact cars. Shoulder space is limited for larger occupants. Visibility remains good overall.

As in front, the 200’s Sebring roots hurt in the backseat. Headroom in sedans is adequate, but there’s no excess legroom. Generous foot room helps, though. The narrow cabin rules out three-abreast seating for all but children. Even then, a middle rider has to straddle a hump in the floor, which is odd given that this is a front-wheel-drive car. The convertible’s rear seat holds only two passengers and is sized for teens. Getting into the back requires some twisting, too.

Trunk liftover is better in the 200 than the Sebring, but a short deck limits the cargo area’s utility. Interior storage consists of a decently-sized glovebox and center console. Top up, the convertible’s trunk is nearly as large as the sedan’s. Top down, there should still be enough space for a couple of golf bags.

2011, 2012, 2013, 2014, Chrysler, Used
For more than 50 years, car shoppers have been relying on Consumer Guide Automotive. Our editors test drive and thoroughly evaluate virtually every new car, truck, minivan, and SUV sold in America.