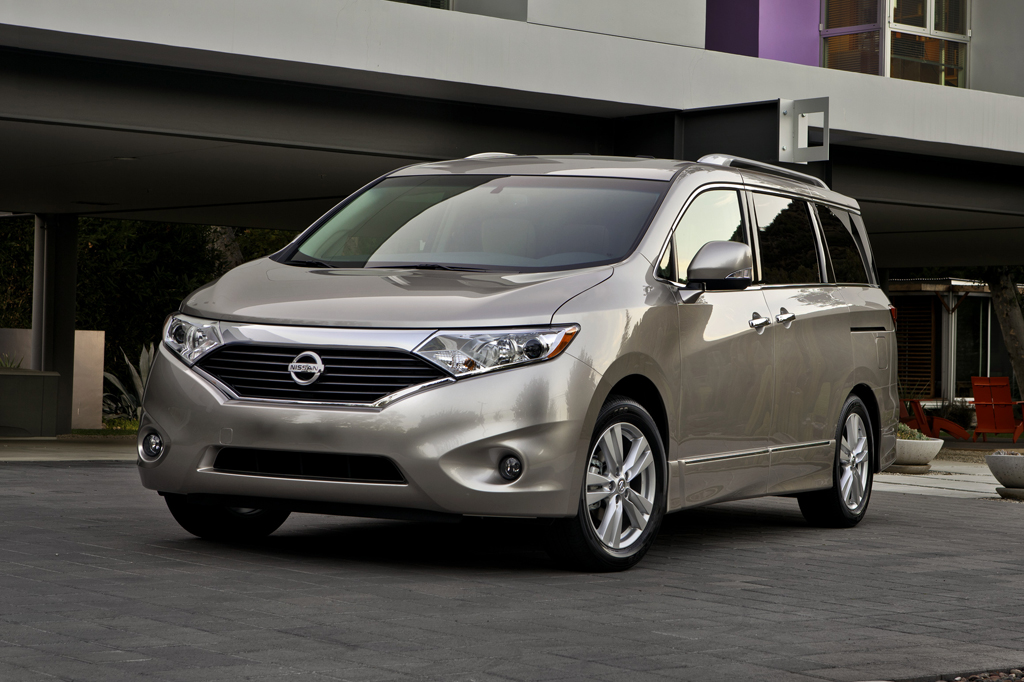 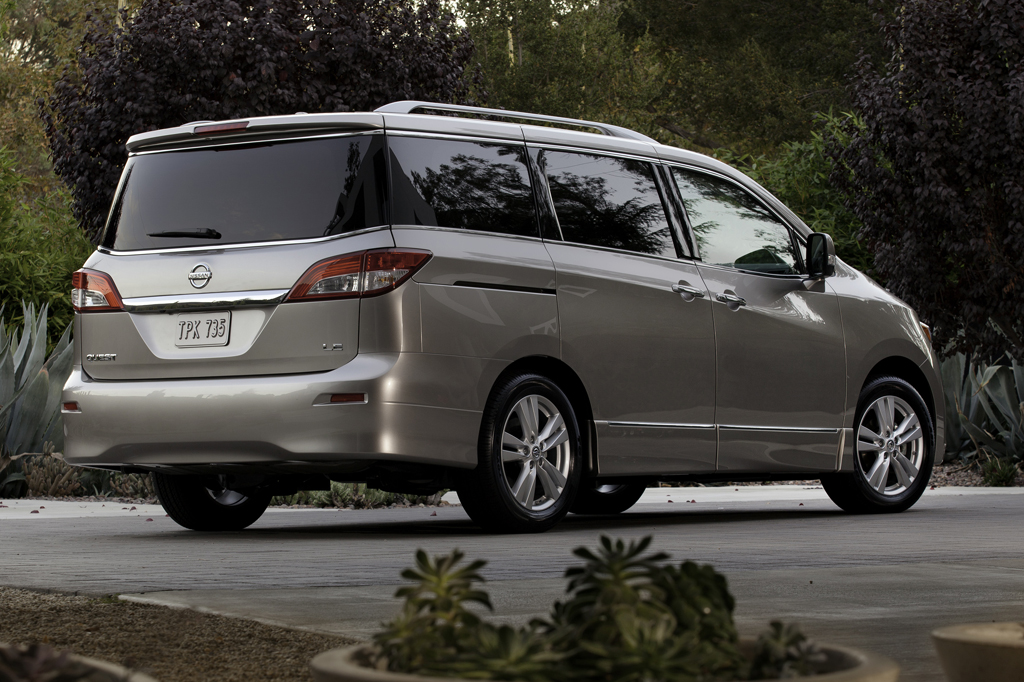 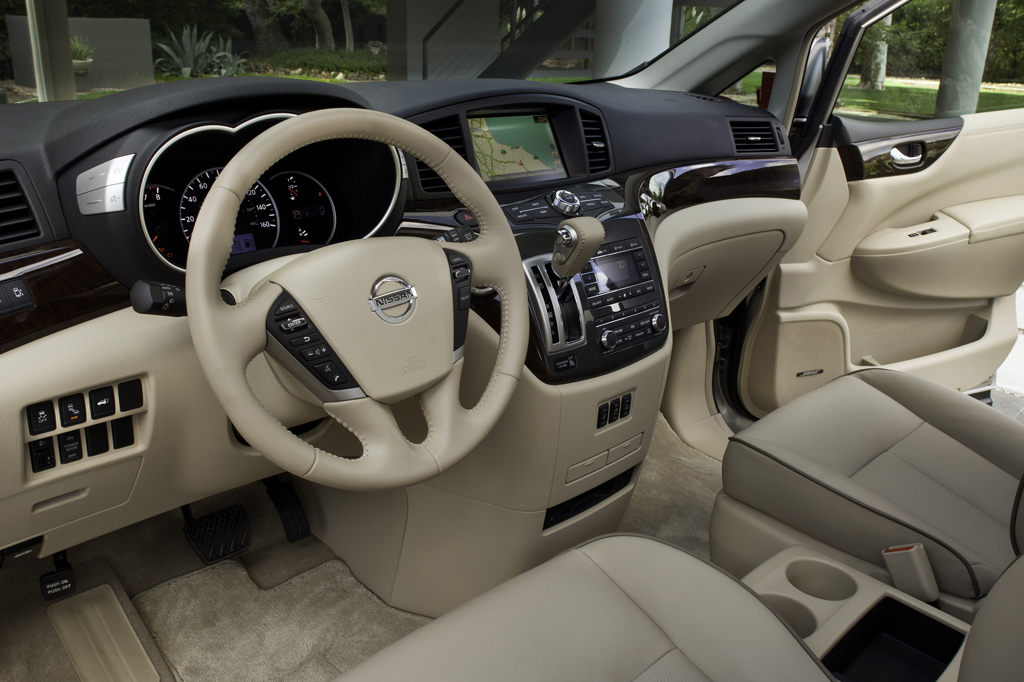 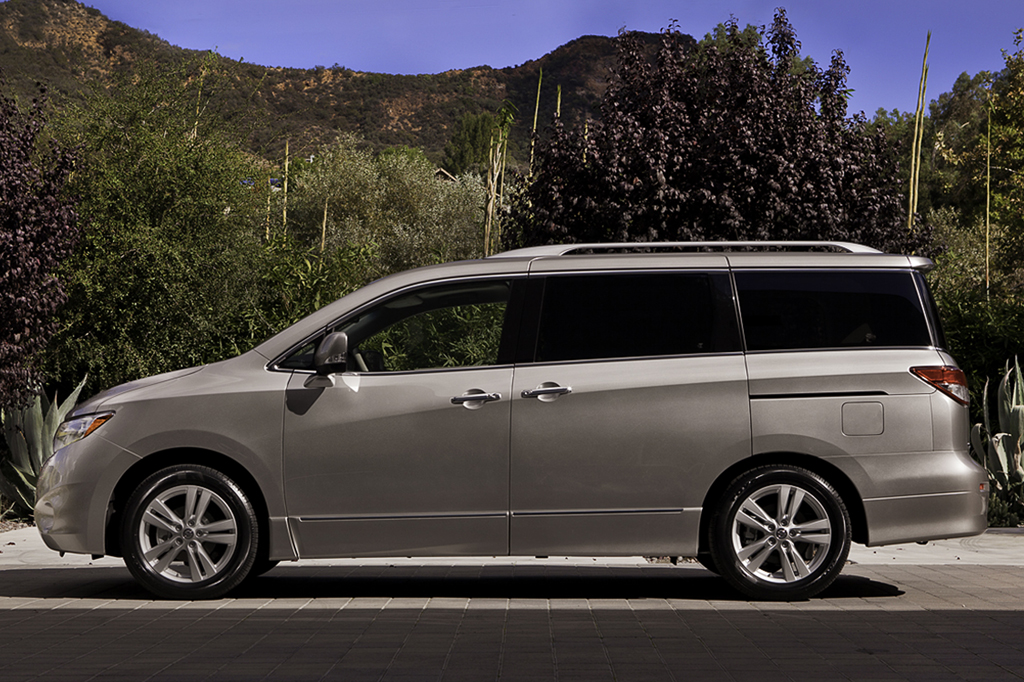 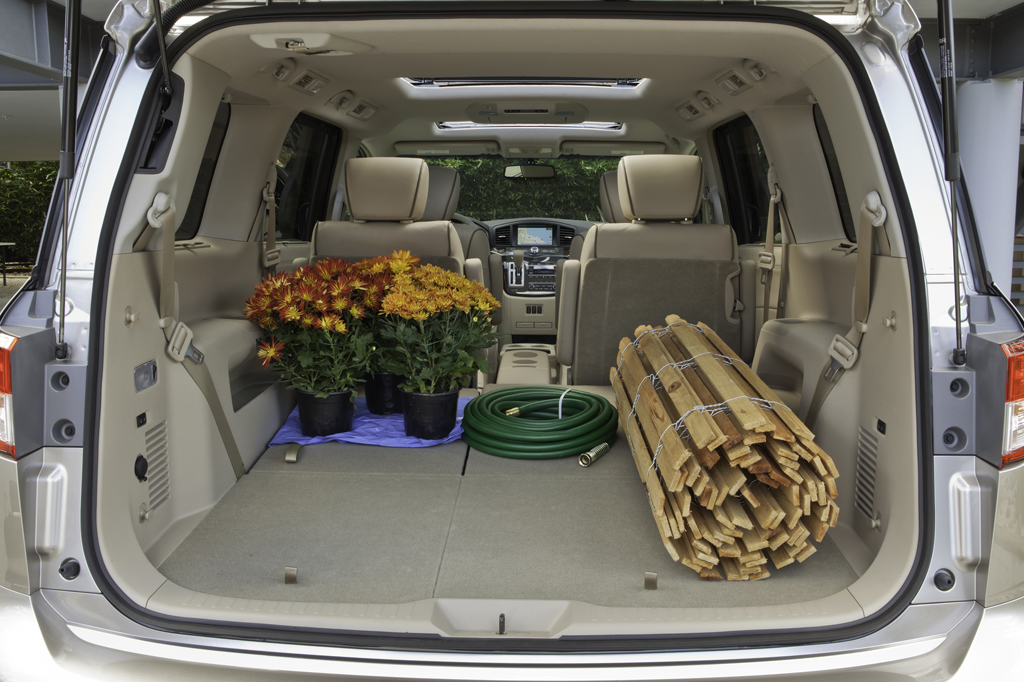 Model-year 2011 might be considered the year of the minivan. Redesigned products from the major players in this class meant competition has been stiff for Nissan’s new Quest. A strong engine, inviting interior, and easy controls are Quest strong points. However, fewer optional comfort and convenience features and less cargo and passenger flexibility than most rivals make it fall a bit short of the class-leading Chrysler and Honda minivans.

After skipping model-year 2010, the Nissan Quest returned as a redesigned 2011 model. The minivan borrowed elements of its design from the Nissan Murano midsize SUV. Quest was available in four models: base S, SV, SL, and top-line LE. All used a 260-horsepower, 3.5-liter V6 engine and a continuously variable transmission (CVT) that behaves much like an automatic. Seven-passenger seating was standard: The second-row bucket seats and third-row bench seat could fold forward, leaving a permanent underfloor storage well behind the third row. Standard safety features included all-disc antilock braking, traction control, an antiskid system, front side airbags, and curtain side airbags. Pushbutton start was standard on all models. So was the Easy Fill Tire Alert System, which flashed the exterior lights during tire inflation and sounded the horn when the tire reached the recommended pressure. One-touch power-sliding doors and a rearview camera were standard on all except the S model. Other available features included blind-spot alert, a dual-panel sunroof, one-touch power liftgate, DVD entertainment with 11-inch screen, wireless cell-phone link, and a navigation system. Minivan rivals included the Dodge Grand Caravan, Honda Odyssey, and Toyota Sienna.

All Quests had the same powertrain: a 260-horsepower, 3.5-liter V6 engine teamed with a continuously variable transmission (CVT).

Nissan’s 3.5-liter V6 provides ample power in all situations, though a somewhat touchy gas pedal results in occasional lurching from a stop. Quest is strong off the line with enough muscle for passing, though the CVT occasionally causes the engine to sound strained during uphill climbs.

Fuel economy is fairly typical for a minivan–less than impressive. In Consumer Guide testing, we averaged 18.1 to 18.5 mpg. Quest uses regular-grade gasoline.

Due to good overall isolation; Quest handles minor road imperfections well. Only larger potholes jar. Some pitching is noticeable at times, especially in response to dips in the pavement.

The cabin is fairly well isolated and wind noise is well checked, though some road noise is apparent. The engine sounds refined, though drone from the CVT is persistent from a stop and during hill climbs. Otherwise, it’s unobtrusive.

The optional navigation screen is large and inset into the dashboard for easy visibility. It can be operated via touchscreen or a combination of buttons and a large central dial. It’s fairly intuitive and doesn’t absorb audio and climate functions. Those separate controls are also easy to use, though the radio switches sit fairly low on the panel. The one-touch feature for the sliding door and hatch is quite handy when arms are loaded with kids or packages. The shifter is mounted on the dashboard, and blocks access to some controls.

Interior assembly quality is top-notch. Though heavily outfitted in plastics, Quest’s interior is inviting and comfortable with standard woodgrain trim in the first row and padded soft-touch surfaces throughout the cabin. Leather seats with contrast piping, installed in SL and LE models, add to an overall classy-looking interior.

Front-seat headroom and legroom abound. Seats are long-trip comfortable–supportive, yet pillowy. A wide, padded door armrest is a nice touch. Rear visibility is deceptive. From outside, the rear window is large and unobstructed. Inside, however, it’s covering large pillars that mar the view to the rear corners. When deployed, the third-row headrests also impede rear visibility. Front visibility is good, partly due to large side mirrors set away from the vehicle. The optional double-panel sunroof adds an airy feel to the cabin. Note that adjustable pedals are no longer available.

Rear occupants can expect plenty of headroom and legroom in the second row; most adults will fit comfortably. Third-row headroom is decent thanks to a tall, squared rear roofline. Though the Quest rides higher than others in the class, a standard running-board step aids entry and exit. Second-row seats tilt and slide for passenger comfort and to allow entry to the third row. The opening to the third row is fairly narrow, though children and small adults will pass through just fine. The standard second-row center console is removable, but that opening is too narrow for passage. Note that a dual-screen entertainment system is no longer available.

Cargo space is satisfying, though the front-seat center console is fairly small. Second- and third-row seats fold forward with ease to create a flat load floor. The second row folds via a seat-mounted lever. The third row folds using tether straps or (on SL and LE models) a power-folding button, though you have to hold the button down during the entire fold-up operation. Power operation is only for moving the seat up; it must be folded down manually. The cargo well behind the third row is always available for storage since the third row folds forward instead of tumbling back into the storage hold. Seats cannot be removed. The optional one-touch-open power liftgate is a handy feature when arms are full of packages or children. Small-items storage is decent and comprised of several cubbies, a large glovebox, and 16 cup and bottle holders.

2011, 2012, 2013, 2014, Nissan, Used
For more than 50 years, car shoppers have been relying on Consumer Guide Automotive. Our editors test drive and thoroughly evaluate virtually every new car, truck, minivan, and SUV sold in America.