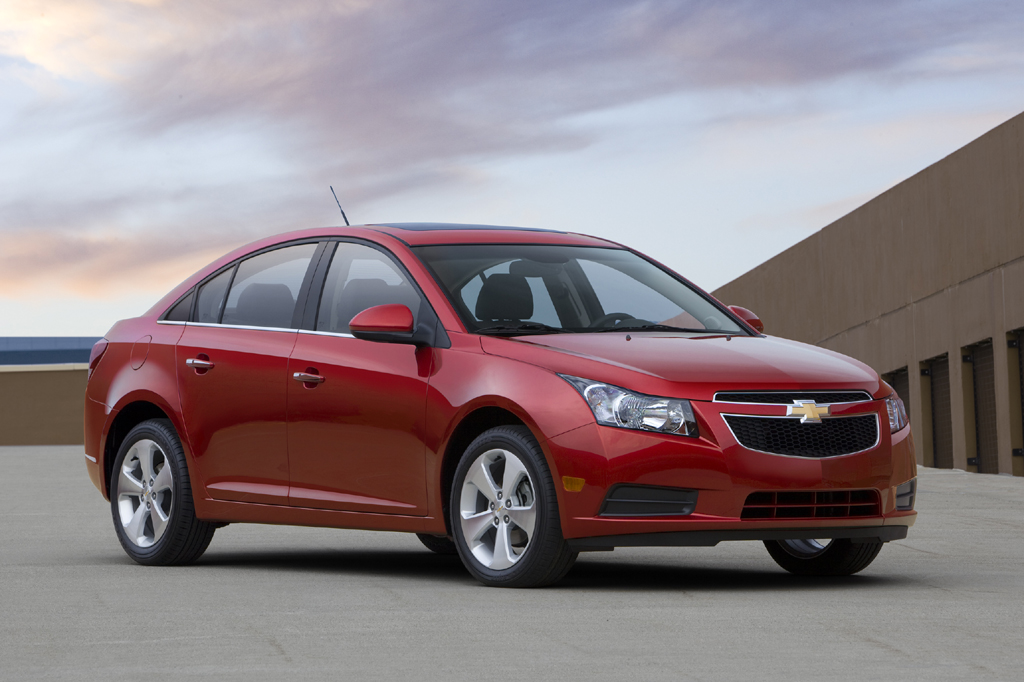 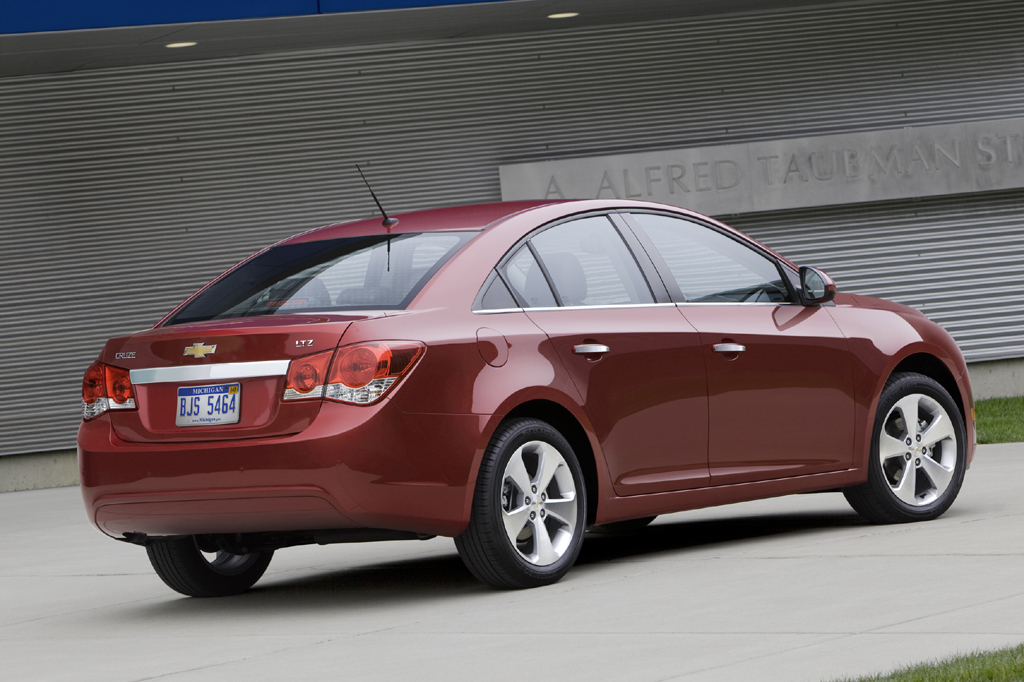 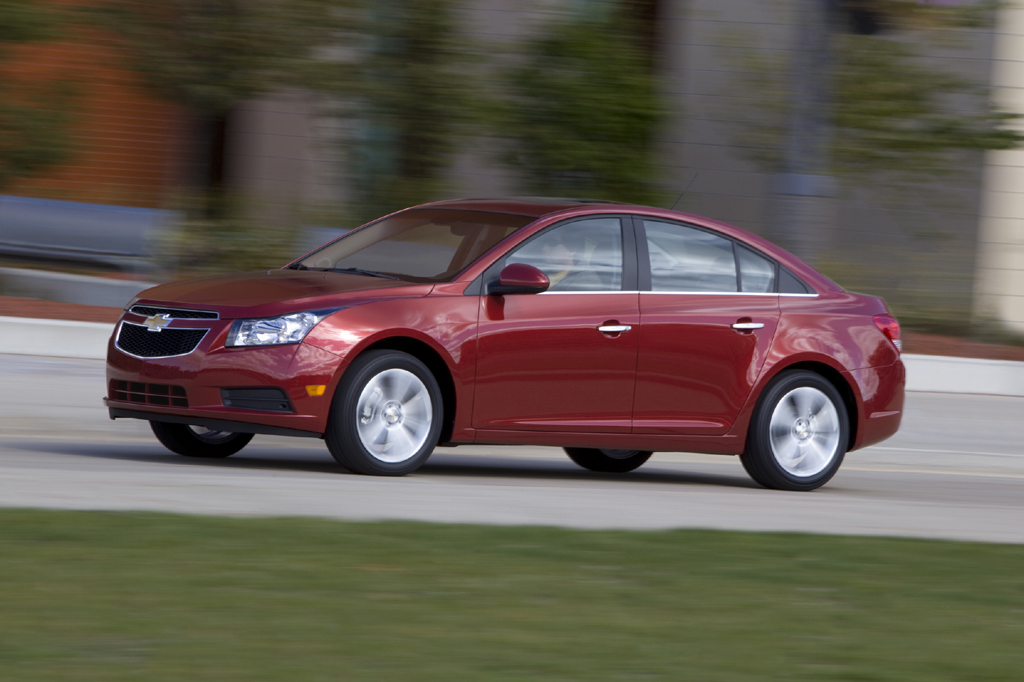 Chevrolet’s latest compact sedan represents itself very well in a crowded and highly competitive market segment. Engines are smooth and offer good power for most everyday driving situations. The Eco edition delivers excellent fuel economy with little compromise of this car’s other virtues. Interior comfort, especially in the front seat, is very good. Interior appearance scores solidly among the class leaders. On the road, Cruze feels substantial and refined. Cruze’s list of standard safety features also is compelling. Chevrolet has produced a well-rounded compact sedan that holds its own with the best entries in this class. If you are shopping among compacts, the Recommended (2011-12) Cruze should certainly be on your shopping list, new or used.

For 2011, the brand-new Chevrolet Cruze replaced the prior Cobalt as the compact car from General Motors’ volume division. Cruze was a four-door sedan that came in LS, LT, LTZ, and fuel-economy-oriented Eco trim levels. LT models were further subdivided into 1LT and 2LT editions. The LS had a 136-horsepower, 1.8-liter four-cylinder engine. The 1LT, 2LT, LTZ, and Eco models used a turbocharged 1.4-liter four-cylinder engine that produced 138 horsepower. A six-speed manual transmission was standard on the LS and Eco. A six-speed automatic was optional on those models and standard on the LT and LTZ. Standard safety features included antilock braking, traction control, an antiskid system, curtain side airbags, front and rear side airbags, and front knee airbags. Chevrolet claimed Cruze was the only car in its class with 10 standard airbags. Cruze Eco models had ultra-low-rolling-resistance tires and other aerodynamic tweaks that aimed to increase fuel economy. Available on the LT and LTZ was an RS Appearance Package, which included fog lights and specific exterior trim. Leather upholstery, heated front seats, remote engine start, and a wireless cell-phone link were standard on the 2LT and LTZ. A sport suspension was standard on the LTZ. Rear-obstacle detection was optional on the LT and standard on the LTZ. Chevrolet’s Cruze competed against such compacts as the Ford Focus, Honda Civic, and Mazda 3, as well as the Toyota Corolla, Hyundai Elantra, and Nissan Sentra.

Nobody will mistake any Cruze for a Corvette, but both four-cylinder engines provide more-than-adequate acceleration in most situations. Turbocharged Cruze models feel more sprightly around town and confidently merge onto the highway. Passing response is fairly leisurely with both engines. Several 2011 model-year test cars have exhibited issues with the automatic transmission, including delayed response and slurred shifts. General Motors was aware of these problems and issued a fix that involved re-programming the transmission’s software. The automatic transmission saw steady improvement after the car’s debut in 2011. By 2012, it shifted smoothly and decisively. The manual gearbox in the Cruze Eco has a smooth clutch but awkward shift action. One test car’s shifter had a tendency to “catch” on the gate when upshifting between 1st and 2nd gear or downshifting between 3rd and 2nd. With an eye on economy, gear ratios in the Eco manual gearbox are spaced differently from those in the standard LS unit.

In Consumer Guide testing, automatic-transmission LS models have averaged 28.5 to 29.2 mpg. Non-Eco turbocharged models averaged 24.1 to 25.2 mpg. A manual-transmission Eco averaged a thrifty 47.6 mpg, but primarily in top-gear freeway driving. With mostly city work, a similar Eco averaged 31.2 mpg. Note that the manual-shift Eco has a smaller (12.6-gallon) gas tank than other Cruze models. In 2012, the EPA estimate for Turbo models with automatic showed a 2-mpg improvement. Eco sedans earned higher EPA fuel-economy estimates than other models: 28/42 mpg with manual shift and 26/39 mpg with automatic. Cruze models use regular-grade gasoline.

All Cruze models have a very solid body structure that enhances the impression of overall comfort. Differences in ride quality are mostly the result of tire size. LS and LT models have 16-inch wheels and are quite pleasant on the road. Although the ride might be a bit too firm over very large bumps, it’s not overly intrusive. Eco uses the same low-rolling-resistance 17-inch tires selected for the Chevrolet Volt, and it’s just as comfortable as the LS and LT. On the other hand, LTZ versions roll on 18-inch wheels that exact a greater toll on ride quality. They can be borderline brittle over expansion joints and pockmarked city streets, though the highway ride is fine.

Cruze’s overall handling inspires confidence, with minimal body lean in turns. Accurate steering has good feel, with little need for correction. There’s little difference in response between cars equipped with the 16- and 18-inch wheels. Braking is smooth and strong with good pedal feel.

Quietness is a virtue. Cruze is among the best in class for noise control. Road noise in most models is very well subdued. Wind rush is only noticeable at high speeds, and even then it’s not annoying. Both engines are vocal during acceleration, but they’re nearly silent at cruise.

Large, clear gauges are easy to see and read. Most minor controls are well-located and clearly marked. A large center screen displays radio and climate settings. Tuning the radio and adjusting a connected digital-music player is a bit slow at times. The next-track and fast-forward functions are set to the same button, which can be frustrating. GM’s OnStar Turn-By-Turn navigation is very simple to activate and works quite well with spoken directions and visual prompts on the information screen at the center of the gauge cluster and the central display screen.

Most plastics are very lightly padded or hard to the touch, but they are attractive. In fact, Cruze’s interior is more aesthetically pleasing than that of most competitors. Some models have cloth insert panels on the dashboard and door panels for an unexpected, but pleasant, interior touch. The cloth interior on 1LT and Eco models feels sturdy and its interesting texture adds visual appeal. LTZ’s standard leather brings a bit of an upscale aura to the cabin.

Even for large drivers, a Cruze is very comfortable up front. Cruze’s wide-for-the-class body is really evident, with excellent shoulder room and an airy, expansive atmosphere that’s unexpected in a compact sedan. Six-footers enjoy plenty of headroom, even with the optional sunroof. Generous fore-and-aft seat travel, together with the standard tilt/telescopic steering wheel, make it easy to find a comfortable driving position. Except for the Eco, models tested when new have had power adjustment for most functions on the driver’s seat. Backrest angle adjustment was manual. The front passenger seat was manually adjustable, with two ratcheting pumps to adjust the height and rake of the front and rear sections of the lower cushion–an unexpected and welcome touch. Access for tall occupants is marred by stingy door openings.

Rear-seat accommodations are fairly typical for a compact sedan. Legroom can get tight for adults if the front seats are pushed most of the way back. Provided the front-seat passengers aren’t especially tall, two six-footers will fit with decent headroom and enough comfort for moderate-length trips.

Cruze has one of the bigger trunks in the class, with a reasonably large opening. The 60/40 split rear seatbacks fold nearly flat, and the large pass-through adds to usable cargo room. On the downside, sickle-style trunk-lid hinges intrude into the cargo space. Interior small-item storage is good, but not exceptional. The console has two large cupholders, two small open bins and a small, but deep, covered compartment under the sliding armrest. Other interior storage includes a drop-down glovebox, a pocket on the passenger’s side of the console, small pockets with water-bottle holders on each door, a map pocket on each front-seat back, and two open cupholders in the rear seat’s fold-down center armrest.