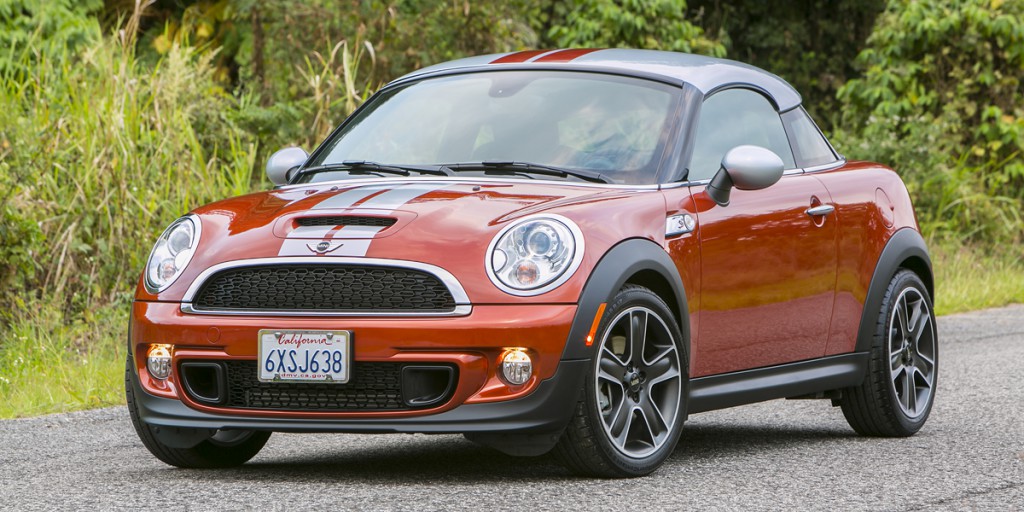 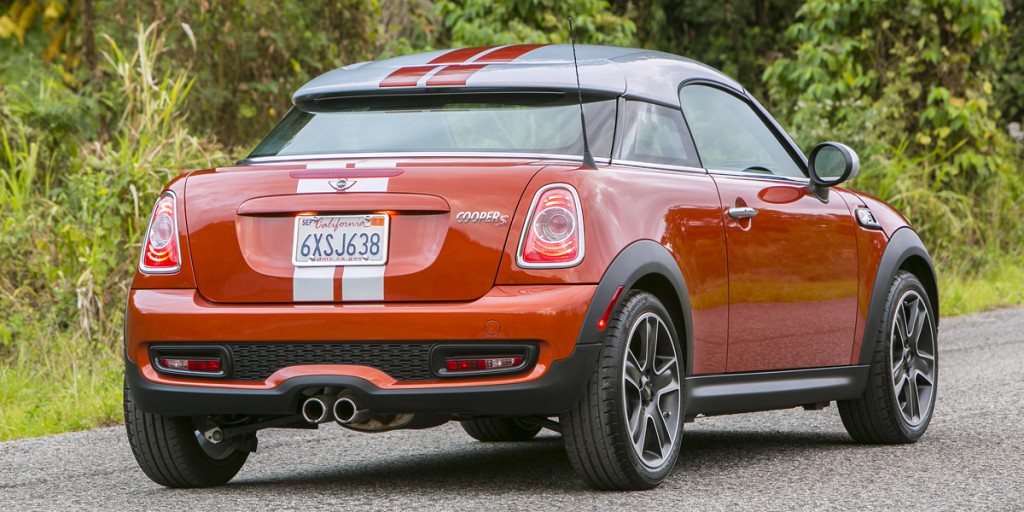 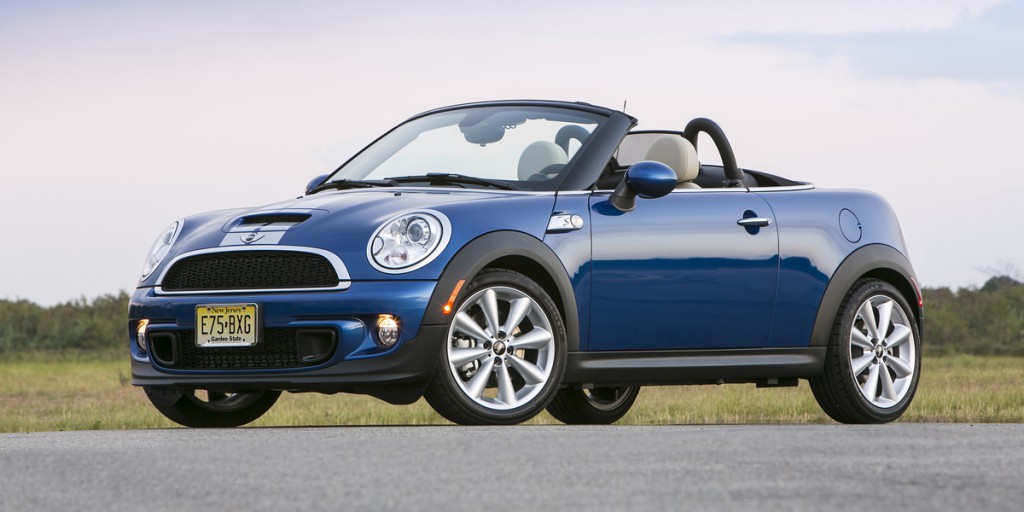 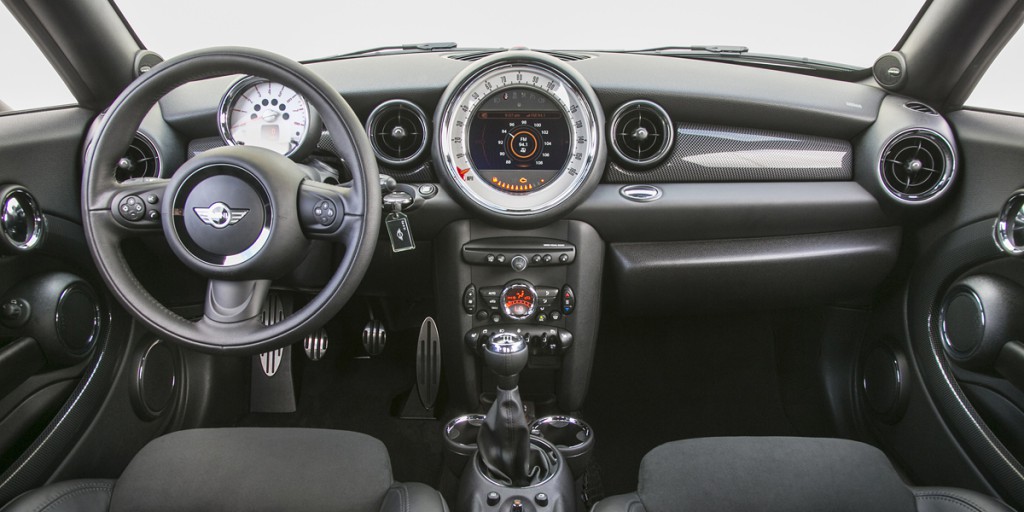 Cooper Coupes and Roadsters share virtues and vices with equivalent Mini Hardtops and Convertibles, but sacrifice back-seat utility for sportier styling and handling. That strikes us a questionable tradeoff given the price surcharges when new. Our test 2012 JCW Coupe, for example, stickered at a not-so-Mini $38,350 (including $700 destination). So unless you’re simply mad about the Coupe or Roadster’s looks and 2-seat format, a 4-passenger base or S Hardtop offers better value–and arguably more of an “authentic Mini” experience.

The Coupe shared many design elements with the boxy 2007-2013 Cooper Hardtop (Mini’s 4-seat hatchback model), including front-end appearance, powertrains, chassis components, and most features. It even had the same footprint, but stood about an inch lower overall and looked more rakish. Styling alterations involved a more steeply raked windshield, round-top door windows, and a so-called “helmet” roofline inspired by baseball caps worn backwards (honest). A long liftgate terminated in a vestigial rear deck and incorporated a wraparound window beneath the roof’s trailing-edge overhang. The hatch also housed an “active” rear spoiler that powered up and down to enhance stability at higher speeds.

The Roadster shared many of the Coupe’s styling cues, but compared to Mini’s 4-seat Convertible it had a shorter-length folding top with an arched instead of square profile; and a conventional lift-up trunklid instead of the Convertible’s swing-down “tailgate.” Like the Coupe, the Roadster came with an “active” rear spoiler that automatically powered up from the deck to enhance aerodynamic stability above 50 mph, then retracted when speed dropped to 30 mph or so.

Inside, the normal back seat was replaced by an open storage area and a stylized partition. The latter incorporated a narrow package shelf, radio-speaker mounts, and a 14-by-8-inch center pass-through panel that could be locked to secure the trunk behind. The partition improved structural rigidity with this hatchback configuration and was deemed necessary to achieve credible handling in what was billed as a full-fledged sports car. Driver and passenger accommodations were similar to those of 4-seat Minis, but the seats were set lower to maintain headroom beneath the “chopped” roof. For the same reason, the Coupe’s headliner is molded with an oval scallop above each seat.

In the Roadster, the partition contributed to structural rigidity in the absence of a permanent metal top and also mounted a pair of rollover-protection bars with the same height as the windshield frame, which was specially reinforced.

Mini Coupes and Roadsters were built in Oxford, England, in the same modern plant that turned out the firm’s other models except the Countryman and Paceman, which were sourced from Austria. All these cars were engineered largely by BMW and employed some of the same technology as BMW’s own vehicles.

Despite a “more minimal” nature, when new Coupes carried an approximate $1,450-$1,750 base-price premium over Hardtops. (Roadsters, interestingly enough, started about $400 above comparable 4-seat Convertibles.) With three models that spanned a broad price range before options, the Coupes competed with a variety of sporty/performance 2-doors, but were arguably closest in concept to the Si version of the Honda Civic Coupe, the 3-door Hyundai Veloster, and the Scion FR-S and Subaru BRZ siblings.

The Roadster’s closest rival in concept and price was the Mazda MX-5 Miata, though it was a rear-driver with an available power hard top. However, buyers who favor “classic” design may have also weighed the Roadster against two similarly retro front-drive 4-seaters: the Fiat 500C, basically a 2-door sedan with a large rollback fabric sunroof, and the Volkswagen Beetle Convertible, which had a full-size cloth top. Depending on model and options, all three alternatives rivaled the Mini Roadster for acceleration, fuel economy, day-to-day practicality, and top-down appeal.

Like other Minis, Cooper Coupe and Roadsters offered numerous options, with some key features available both individually and in packages. The Premium Package, for example, included automatic climate control, keyless access/engine-start, rain-sensing wipers, and auto-off headlights, all of which could be ordered separately. The same applied to the base- and S-model Sport Packages, each of which included body stripes, white turn-signal lenses, and “sport” traction control that could be fully disabled at the driver’s discretion. The base-model group also delivered sport front seats along with 16-inch run-flat tires for the Coupe; the S version included 17-inch tires. The base and S could also be ordered with an alternative John Cooper Works Package. This, too, included the sport traction control, plus specific 17-inch wheels, body cladding, and special trim.

Additional a la carte options included xenon and steering-linked headlamps; cloth, cloth/leather, and full-leather upholstery; larger-than-standard tires; and alternative wheel designs. In addition, the Coupe and Roadster mimiced other Minis by offering a dizzying array of “personal” trim and color options, including eye-catching body graphics like Union Jack- and checkered-flag motifs for the roof, door handles and door mirrors. Mini customers could even design their own artwork on a special-order basis.

Also per Mini practice, all Cooper Coupes and Roadsters used 1.6-liter 4-cylinder engines with direct fuel injection and model-specific tuning. The base version had 121 horsepower, while the S and JCW added turbocharging to achieve 181 and 208 horsepower, respectively. Drive was to the front wheels. All versions came standard with a 6-speed manual transmission. A 6-speed automatic was optional on base and S models. The two turbo engines included an “overboost” feature that provided a brief burst of extra power under certain operating conditions.

For 2012, the base Cooper Roadster was EPA-rated at 27 mpg city and 35 highway with either available transmission. The S earned ratings of 26/35 with manual transmission and 26/34 with automatic. The JCW convertible had estimates of 25/33 with the 6-speed manual.

Like other Minis, the Cooper Coupes and Roadsters included expected and federally required safety features such as antilock brakes (ABS), stability system, and traction control. Curtain side airbags were not available, but standard seat-mounted side airbags were designed to provide both head and torso protection. The Roadster also came equipped with rollover-protection bars that were designed to prevent or minimize injury in concert with a reinforced, same-height windshield frame. The run-flat tires and available rear-obstacle detection could be regarded as safety-related pluses. So could the manual transmission’s hill-holder clutch.

All Mini Cooper Coupes and Roadsters used 1.6-liter 4-cylinder engines with direct fuel injection and model-specific tuning. The base version was rated at 121 horsepower. The S and John Cooper Works added turbochargers and were rated at 181 and 208 horsepower, respectively. All base and S models came with a 6-speed manual transmission and had an optional 6-speed automatic. In 2012, the John Cooper Works was only sold with the 6-speed manual. Starting in 2013, the JCW could be ordered with the extra-cost 6-speed automatic as well.

A manual-transmission John Cooper Works is the only Coupe model made available for testing so far. No opportunity to test a Roadster. Mini says the JCW Coupe does 0-60 mph in 6.1 seconds, and our tester certainly felt that quick. The automatic version takes a claimed 6.3 seconds. Minor turbo lag is noticed in low-speed driving. Otherwise, the test car put its power down well and had plenty of mid-range muscle for highway passing. As ever, Mini’s slick-shifting manual transmission and smooth, low-effort clutch action add to driving fun. Note that Coupes weigh about 100 pounds more than equivalent hatchback Hardtops, but acceleration differs little, model for model.

Like 4-passenger Mini Hardtops and Convertibles, the 2-seat Coupes suffer a firm, choppy ride over anything but “billiard-table” surfaces, aggravated by standard hard-sided run-flat tires. S and JCW Coupes have firmer suspensions with apparently less compliance. That conspires with 17-inch wheels–standard for JCW, available for other Coupes in lieu of 15s or 16s–to make the going stiff, jiggly and very often harsh. Our experience with other Minis suggests the smaller wheels are definitely best for ride comfort.

Some Minis may ride like buckboards, but all models corner like go-karts. The Coupes are no exception. These are among the smallest cars around, so they’re sports-car nimble in fast direction changes. The steering helps with surprisingly good road feel for an electric-assist system, plus a tight turning circle and effort that firms up nicely as speed rises. Alas, like their Hardtop sisters, the S and JCW Coupes are prone to front-drive torque-steer (pulling to one side) in rapid acceleration, especially on damp pavement, and can be jostled slightly off course by sharp mid-corner bumps. But also typical of Minis, the brakes are easy to modulate and deliver smooth, quick stops.

Minis are not unbearably loud, but they are noisier than most small cars regardless of price, with ever-prominent engine thrum and marked road roar with any-size tire. At least the revvy engines sing a sporty song, and JCWs have specific exhaust tuning that imparts a nifty snort under full throttle. Enthusiasts will love all this, but others may find it wearing.

Coupes share gauges and controls with other Minis, so retro form again trumps functionality. The center-mount analog speedometer isn’t easy to read despite being pie-pan size. The Coupe-standard tachometer contains a helpful digital speed readout, but sits in a pod atop the steering column and is partly masked by the wheel rim. “Olde English” toggle switches for windows, locks and other features are placed above the shifter and the inside mirror in fairly haphazard fashion. Climate controls also sit low, are poorly marked, and needlessly clumsy. Ditto the standard audio unit, which requires drilling through cryptic labels and multiple menus for even simple adjustments. The optional navigation system is controlled by a screen within the big speedometer, two buttons flanking the shifter, and a 4-way joystick that also rotates. The system governs audio, trip computer, and connectivity functions too, so it takes time to learn. And the dashboard screen, though sufficiently large to be legible, readily washes out in moderately bright light. So does an undersized climate-control display.

Coupe cabin decor is Mini’s usual distinctive mix of colors, shapes and textures, and a plethora of trim options allows a degree of personalizing matched by few other cars. But though materials are generally price-appropriate, the low-rent plastic used for a few controls and interior panels is a big letdown, given Mini’s near-premium brand image. And despite being the top-of-the-line, our JCW Coupe had one of the crummiest cargo covers we’ve ever seen. It didn’t fit well either.

The Coupe’s rakish roofline, smaller side windows, and lower seat positioning make for a “bathtub” cockpit feel not found in Hardtops–and that some of our testers didn’t like. Still, head clearance is still 6-footer adequate, and there’s the same generous seat travel. The seats themselves are firm and supportive, but the Coupe’s lower stance makes entry/exit more of a strain, aggravated in close quarters by longer doors. Visibility is good except dead-astern, thanks to a slit-like rear window that becomes even less useful when the Coupe-standard pop-up spoiler deploys.

There is no rear seating.

Mini Coupes have more cargo space behind the rear seats than the boxy Hardtop hatchbacks, as well as a larger liftgate that takes more effort to open and close. A fixed partition separates the behind-seats space from the cockpit to provide the security of a separate trunk with the hatch closed and cargo cover in place, while leaving some in-cab storage behind the seats. But the two-piece cargo cover is flimsy and fiddly, the partition’s pass-through panel isn’t very large, and the stepped cargo floor can complicate packing. Small-item storage consists of a good-size drop-down dashboard glovebox, useful pockets behind the door-pulls, and a plasticky pull-down center armrest/cubby that seems designed mostly for phones.