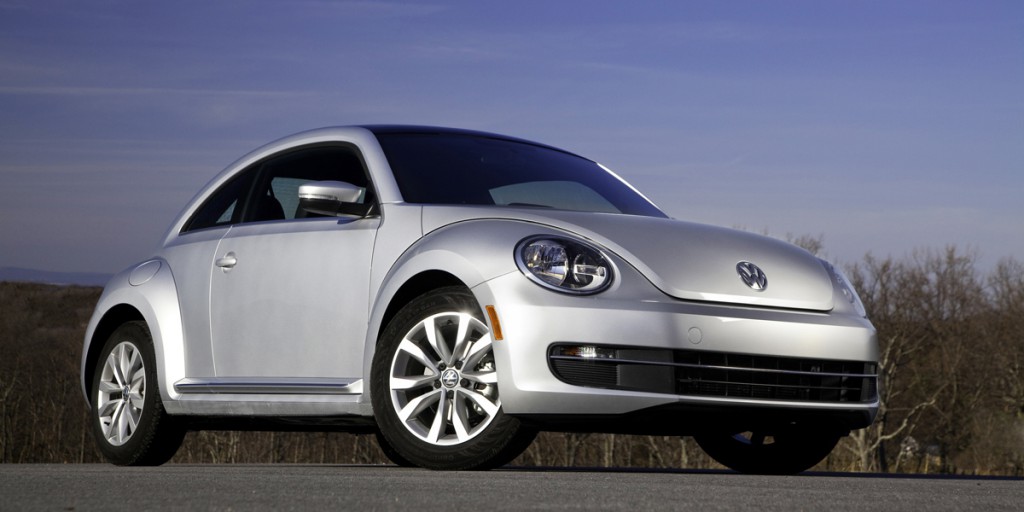 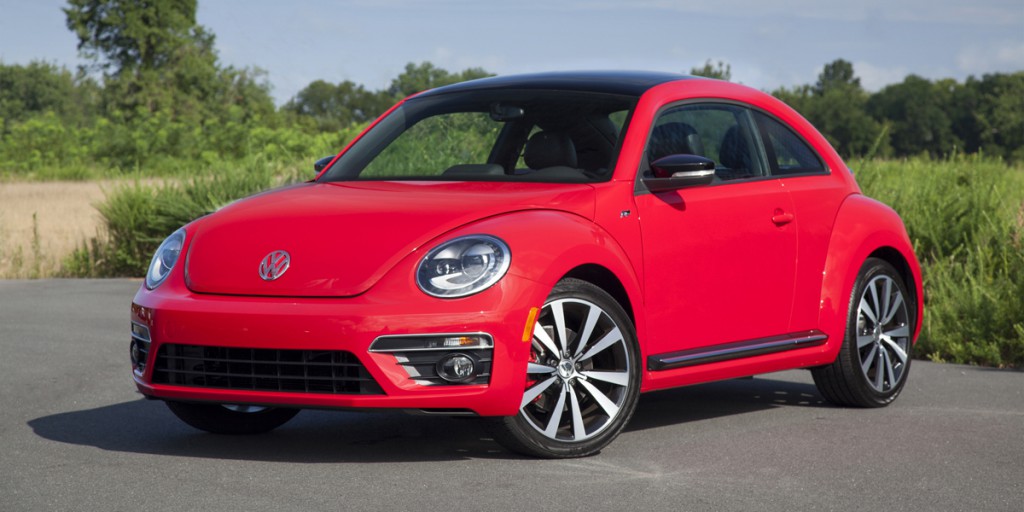 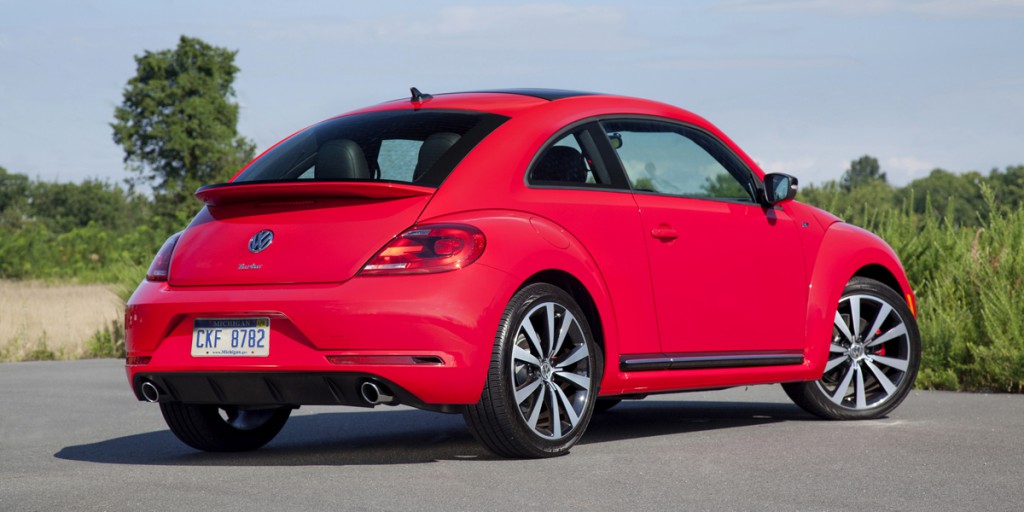 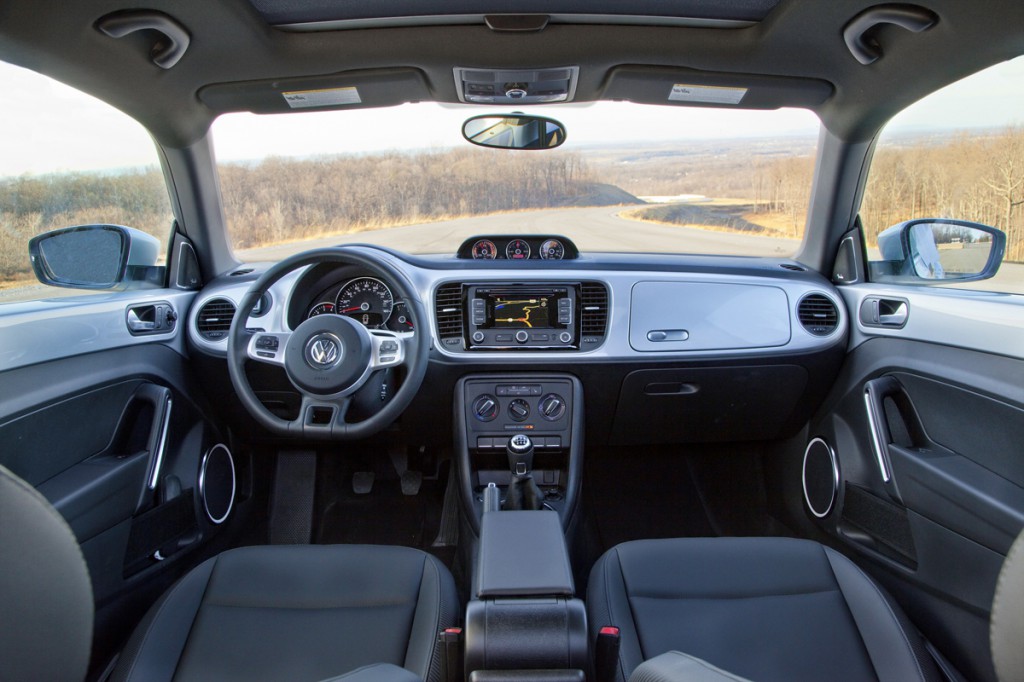 This Beetle is just as style-driven as the New Beetle was, but it’s also more practical in everyday terms, feels more substantial, and is arguably better to drive. Trouble is, a comparably equipped version of the related Golf or Jetta offers many of the same virtues, plus far better rear-seat and cargo room. Where the Beetle really shines is in convertible form. So what we have here is another nostalgia trip that makes sense if you love the styling, and can accept the compromises that go with it. Our hearts like the frugal diesel-powered TDI models, but our heads tell us the best value is in the base 2.5 and 1.8T models.

The 2012 Volkswagen Beetle was redesigned with freshened styling, new engines, and some added features. The 2012 model is about 1 inch longer in wheelbase, 7 inches longer overall, and more than 3 inches wider than the 1998-2010 Volkswagen New Beetle.

Note that trim levels equipped with a sunroof, Fender sound system, and/or navigation were priced as separate models.

A Lamp and Wheel Package (bi-xenon headlights, 19-inch tires) was the sole factory option package. It was only available on the top-line 2.0T Turbo Sunroof/Sound/Navigation model.

Base and 2.5L models came equipped with a 170-horsepower 2.5-liter 5-cylinder with either a 5-speed manual or 6-speed automatic transmission. 2.0T Turbo models had a 200-horsepower 2.0-liter turbocharged 4-cylinder mated to either a 6-speed manual or a 6-speed dual-clutch automated-manual transmission that behaves much like an automatic. Volkswagen recommended regular-grade gas for the 2.5, and premium for the 2.0 turbo. Beetle is front-wheel drive.

Volkswagen recommended regular-grade gas for the 2.5, premium for the 2.0 turbo.

The 2012 Beetle had a standard complement of expected and federally mandated safety features. All manual-transmission models came standard with a hill-holder clutch.

The 5-cylinder engine provides good low-speed acceleration but only adequate highway-passing power. Its 6-speed automatic shifts smoothly and downshifts promptly. The 200-horsepower 2.0-liter gasoline turbo affords greater high-speed power and a more sporting driving experience, but low-speed turbo lag prevents it from producing the same jump off the line as the 2.5. Furthermore, its automated-manual transmission isn’t as smooth in operation or as quick to downshift for passing, but once it does, power arrives in a rush. We’ve had no opportunity to test a Beetle with manual transmission.

No opportunity to measure fuel economy of TDI or 210-horsepower Turbo models. A 2.5-liter convertible averaged 20.8 mpg with more city driving than highway use. A 200-horsepower Turbo with the automated-manual transmission averaged 23.0 mpg in a roughly 60/40 city/freeway driving mix. Volkswagen recommends regular-grade gas for the 2.5, premium for the 2.0 turbo.

Beetle 2.5s cope well with most paved roads, but are most comfortable with the 17- or 18-inch tires. Body motions are well controlled, but washboard roads induce more wheel pattering than we expected. TDI models should be similar in all respects. The sports-oriented Turbos use a stiffer suspension that makes for thumpy, choppy going on rougher pavement, especially with the available 19-inch tires, though even this setup won’t rattle your fillings.

The 2.5 models are dynamically competent, cornering with moderate body lean and good grip. Tactile, properly weighted power steering adds to driving enjoyment, while strong, easily modulated brakes add to driver confidence. Again, TDIs should be similar. Turbos are more athletic yet not truly nimble, feeling heavier and less “tossable” than VW’s own GTI “hot hatchback” and a number of other sporty small cars. The convertible’s body structure is fairly stout, but we observed some body flex and cowl shake when traversing pockmarked Chicago streets.

In coupes, wind rush can overwhelm tire thrum at highway speeds, though neither is intrusive. Still, one tester complained of “borderline excessive” road noise in a Turbo with 19-inch tires. The 2.5 and TDI engines are acceptably quiet at cruise and sound reasonably refined at full-throttle. The Turbo models, unsurprisingly, have a sportier exhaust note, but it’s easy on the ears.

Top-up, Beetle convertible is reasonably serene with good overall noise isolation. Engine and road noise are heard at times, but neither is prevalent enough to be an issue. Top-down drives were with the accessory wind blocker in place. Wind intrusion is well managed, and conversation remains possible even at highway speed.

A simple dashboard channels original-Bug design with contemporary flair. Clear gauges and a useful trip-data display nestle in a pod ahead of the driver. The climate-control panel includes three good-size dials, but it sits near the gearlever, too low for easiest use while driving. Audio and/or navigation units mount high in the center of the dash, a few inches to the right of the wheel. All feature a good-size touchscreen display, flanking function-select buttons, and rotary knobs for volume, radio tuning and similar adjustments. The navigation systems have a third knob that functions like BMW’s iDrive controller. All these setups are pretty intuitive and convenient, though the touchscreens, like so many others, can wash out in strong light.

Interior treatments vary with model. All are stylish but not rich-looking, thanks to extensive use of hard plastic and, save top-price models, few soft-touch surfaces. Available two-tone color combinations help dress things up. Steering-column stalks had a slightly flimsy feel on one test car.

Up front, adults enjoy ample space on comfortably supportive seats. The driving position is easily tailored with the standard tilt/telescopic steering wheel and seat height and lumbar adjustments, plus long seat tracks. Visibility is fine in Beetle coupes except to the rear corners, where thickish roof pillars and the rear headrests get in the way. The sun visors don’t provide very good side-window coverage, as they’re slightly skimpy and neither extend nor have slide-out extensions. The sunroof has a large opening that is somewhat narrow but extends well forward.

The convertible top severely restricts visibility directly aft and to the rear corners. A rearview camera would help immensely when backing out of a parking space, but this feature was not offered until the 2014 model year.

The back seat is more useable than the New Beetle’s, but that’s not saying much, as it’s still shaped for just two passengers. Average-size adults can ride in tandem, but the one behind has minimal legroom. Rear access is a squeeze-play too, if less so than in many 2-door coupes. Though door openings are relatively long and tall, the sliding front seats don’t leave a very wide passage. Note that with the convertible’s available wind blocker in place, the rear seat can not be used by passengers, but it remains available for parcels.

VW claims a useful 15.4 cubic feet of space behind the coupe’s rear seat and 29.9 with the split backrests folded, but the cargo bay is rather narrow and shallow. It also lacks underfloor storage. The seat backs can be dropped while standing behind the car, but shorter folks may not be able to trigger the release buttons except from inside. In addition, the folded seat backs do not lay flat and create a 3-inch step with the cargo floor, thus compromising utility.

The convertible’s trunk is quite small in size and opening, but it’s usefully shaped and when carefully loaded should be able to hold at least several bags of groceries or a couple pieces of soft-side luggage. The rear seat backs are split 50/50 and fold forward, opening up a small pass through. The seat backs don’t fold flat though and leave a step above the trunk floor.

Interior storage is decent in all Beetles, with two good-size dashboard gloveboxes, a largish open bin ahead of the gearlever, and various nooks and crannies.