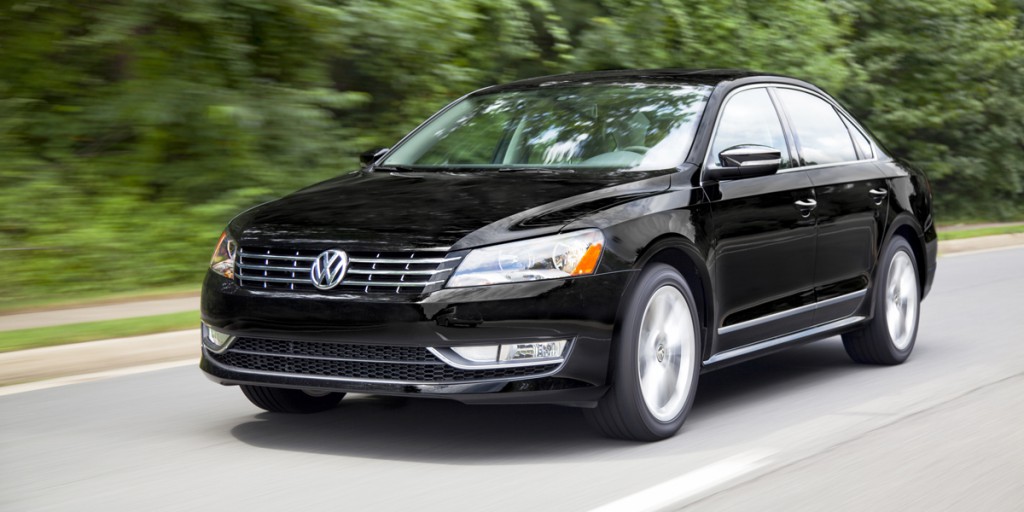 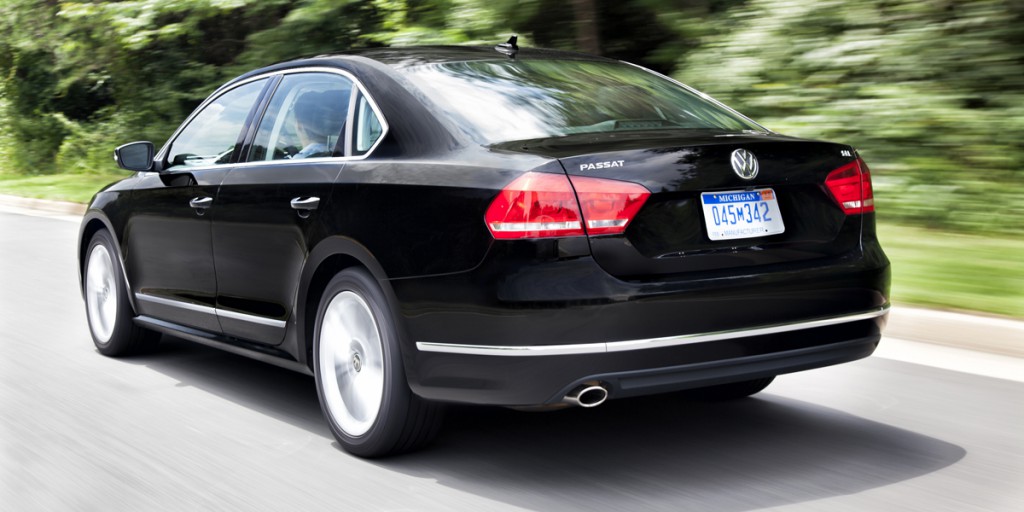 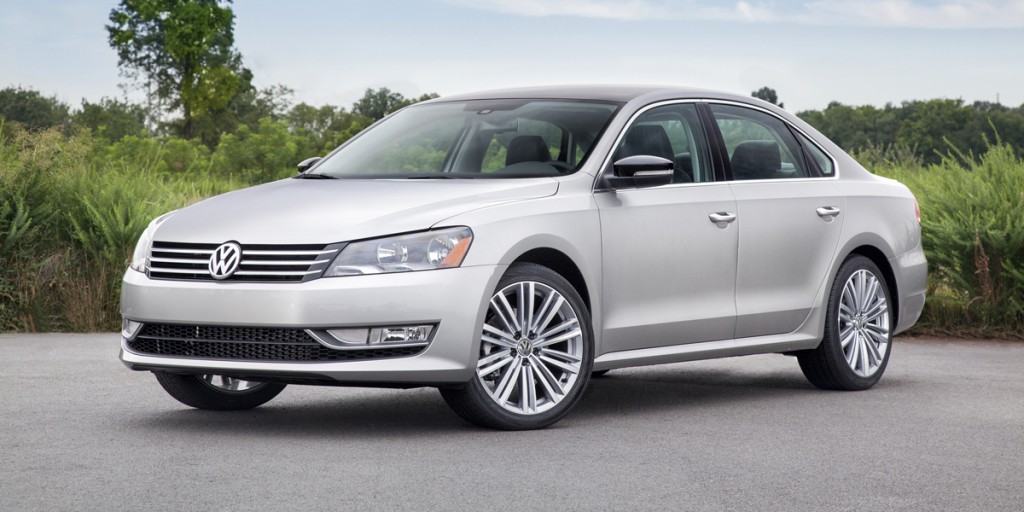 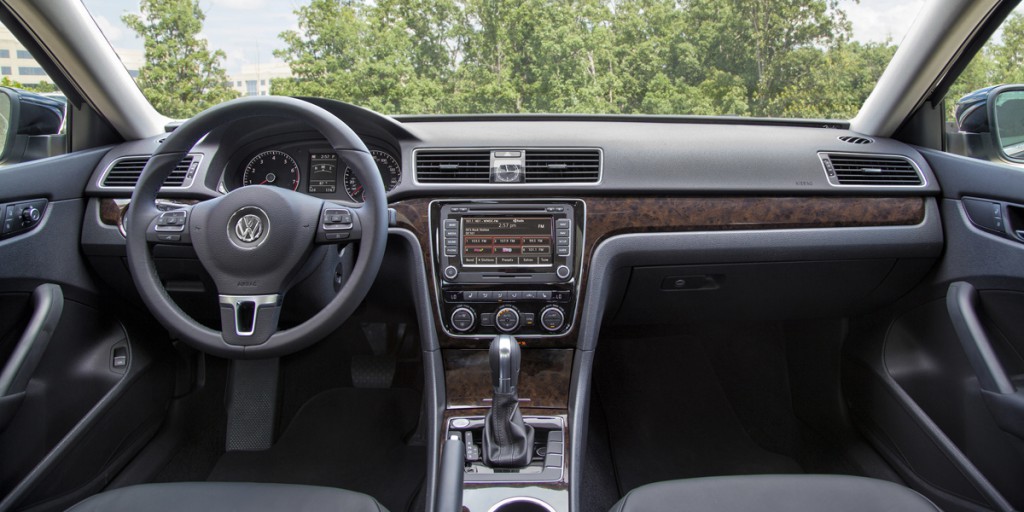 The 2012 Volkswagen Passat was designed specifically for the American market and differed significantly from the version sold in Europe. Larger than the car it replaced, Passat offers excellent passenger and cargo room in a very practical and comfortable package. The available diesel engine is one of this car’s defining features, and the fine fuel economy it promises helps this sedan stand out in a class filled with excellent choices.

After a one-year hiatus, the Volkswagen Passat was redesigned for 2012, and production moved from Germany to the United States. The midsize car now offered freshened styling, new engines, and larger dimensions than the previous model. Now one of the largest cars in its class, Passat topped the segment in combined front- and rear-seat legroom. This car was only offered as a 4-door sedan; the 4-door wagon was discontinued in North America.

While the previous-generation Passat offered just one engine option (a turbocharged 4-cylinder), the new Passat offered three. The 2.5L versions used a 170-horsepower 2.5-liter 5-cylinder engine. The TDI was equipped with a 140-horsepower 2.0-liter turbodiesel 4-cylinder, and the V6 was powered by a 280-horsepower 3.6-liter V6. Five-cylinder models could pair with a 5-speed manual or 6-speed automatic transmission. Diesel versions used a 6-speed manual or 6-speed dual-clutch automated manual that behaves much like an automatic. V6 versions offered only the dual-clutch automated manual.

Volkswagen offered only a handful of standalone options (all minor) on Passat.

Passats have been offered with four engines. The 2.5L versions from 2012 and 2103 use a 170-horsepower 2.5-liter 5-cylinder engine. In 2014, the 2.5L engine was replaced with a 1.8-liter turbocharged 4-cylinder rated at 170 horsepower. The TDI gets a 140-horsepower 2.0-liter turbodiesel 4-cylinder, and the V6 is powered by a 280-horsepower 3.6-liter V6. Four- and Five-cylinder models pair with a 5-speed manual or 6-speed automatic transmission. Diesel versions use a 6-speed manual or 6-speed dual-clutch automated manual that behaves much like an automatic. V6 versions offer only the dual-clutch automated manual.

With the 2.5-liter 5-cylinder engine and automatic transmission, Passat has good pickup from a stop and enough gumption for worry-free highway merging. Testers disagreed over this engine’s throttle response though. Some felt it was fine, others found it non-linear. The 1.8-liter turbocharged 4-cylinder engine is brisk from a stop and has enough gumption for confident highway merging and passing. The TDI engine feels snappy from a stop too, thanks to its low-rpm torque peak. It works well with the 6-speed automated-manual transmission. VW improved throttle response on the TDI, eliminating the bogging and surging from a stop that we noticed in other cars with this engine and transmission combination. The 3.6-liter V6 engine is strong and smooth with fine throttle response.

In Consumer Guide testing a 2.5-liter SEL with automatic averaged a very good 28.27 mpg with a bit more highway driving. Our extended-use 2.5 SEL averaged 25.7 mpg over the course of a 6,859-mile evaluation. A 1.8-liter SEL with automatic returned 27.2 mpg in majority city driving. Diesel-powered TDI SEL with the automated-manual transmission returned an outstanding 39.72 mpg, again with a slight bias towards highway driving. No opportunity to measure fuel economy with the V6. Four- and five-cylinder models use regular-grade gas. VW recommends premium for the V6. The TDI diesel engine is available in all 50 states. It employs a urea-based exhaust-treatment system that requires periodic dealer maintenance.

Passat rides comfortably on the available 17- and 18-inch tires. Small bumps are heard more than felt, and the car is a comfortable highway cruiser.

The Passat never feels particularly sporty, but it is well balanced and more than competent. The steering is lighter in cars with the 2.5-liter engine compared to the TDI and V6, but all are accurate. Braking is strong, but some testers found the pedal too touchy.

Wind rush is noticeable at highway speeds, and the tires make a bit of a ruckus on coarse surfaces. Passat remains reasonably quiet for the class, however. The 1.8-liter and 2.5-liter engines are very smooth and refined. Along with the TDI, both are heard a bit under acceleration, but all three are nearly silent at cruise. The smooth V6 engine sounds rich under acceleration, and quiets nicely on the highway.

The climate controls are easy to reach, clearly marked, and simple to operate. All Passats we’ve driven have had the available navigation system. It uses a combination of buttons and touchscreen controls, and absorbs most audio functions. It will require a bit of acclimation to master. On one test car, the radio/navigation unit was very slow to react to inputs.

Up front, there is good headroom and legroom. The seats are firm and comfortable, but taller drivers may wish the bottom cushion was a bit longer for better thigh support. Comfort is further enhanced by a standard manual tilt and telescopic steering wheel. Visibility is generally good. Entry and exit are trouble free.

Volkswagen claimed the new-for-2012 Passat had class-leading rear legroom. Six footers have ample legroom and foot space behind a like-sized driver. Headroom is good too. The cushion feels a bit low, but overall Passat has a remarkably comfortable rear seat. Entry and exit are easy.

Trunk room is cavernous with a flat floor and low liftover. Sickle-style hinges steal a bit of cargo space though. The 60/40 split rear seat folds down to make room for longer loads. Plentiful small-item storage includes a good-size glovebox, door pockets with bottle holders, a deep console bin, a drop-down bin on the dash left of the steering wheel, a covered bin in front of the shifter, two covered cupholders, and a small open tray.