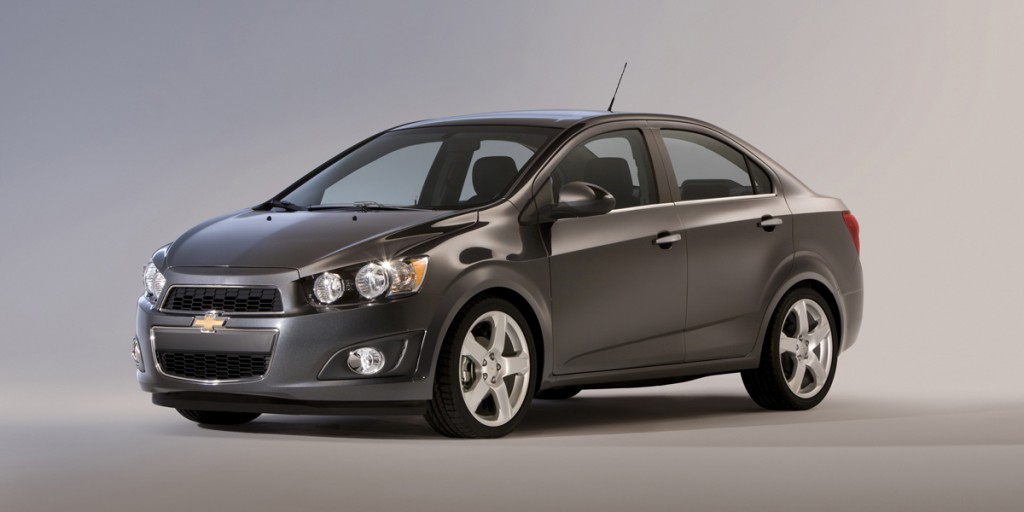 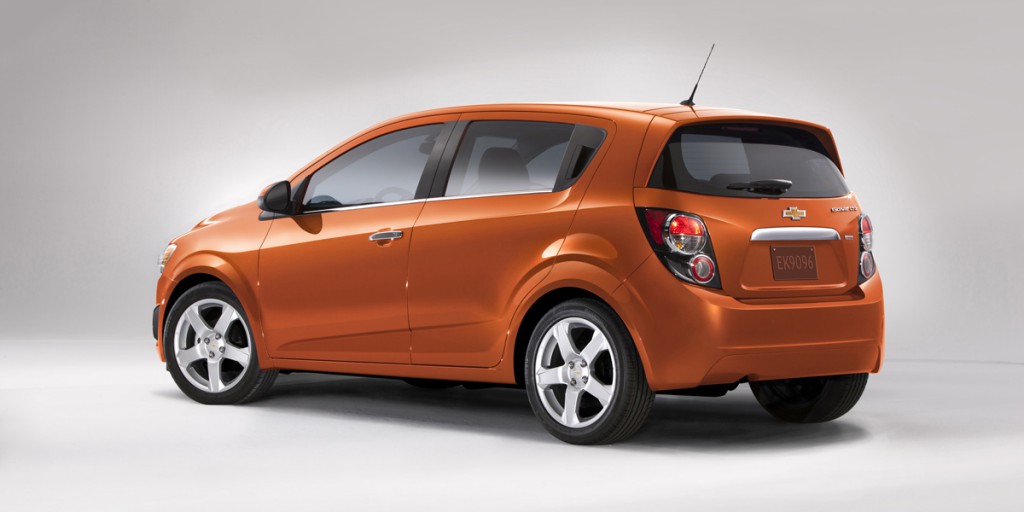 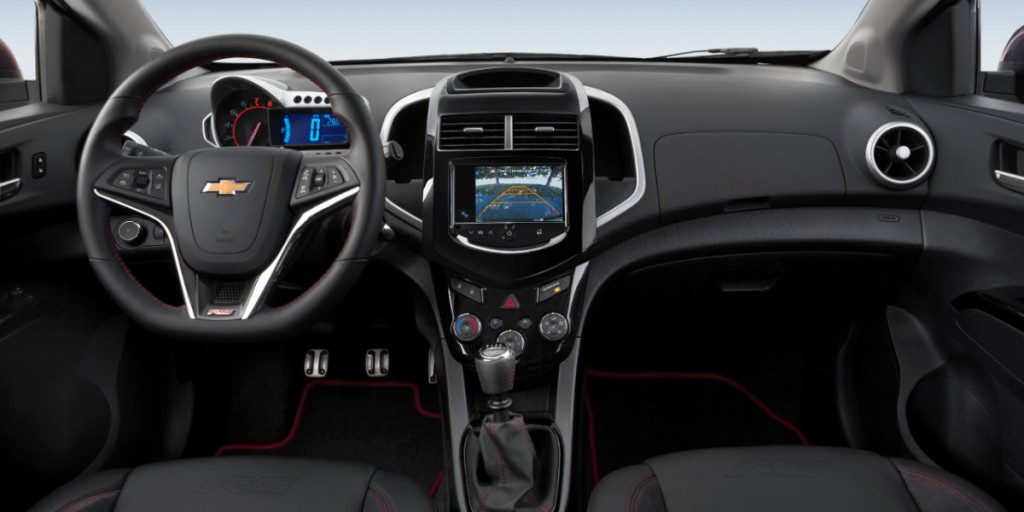 The Chevrolet Sonic is a refined subcompact that delivers surprisingly sound driving dynamics. The turbocharged engine paired with the manual transmission is particularly delightful. Starting prices seem high for the class, but this car comes very well equipped, even in base form. Forget everything you might remember about the Aveo; Sonic is a Recommended (2012) subcompact that deserves your consideration.

Sonic replaced Aveo as Chevrolet’s subcompact car. It slotted below the Chevrolet Cruze in size and price. It was the smallest car in the brand’s North American lineup until the 2013 Chevrolet Spark went on sale.

About the only thing Sonic shared with its predecessor was the fact that it came in 4-door sedan and 4-door hatchback body styles. At first blush, Sonic didn’t look terribly different than the Aveo, but it was a completely different animal.

Much of this car’s design and engineering took place at its South Korean studio, but Sonic was the only subcompact car offered for sale in the US to be built here.

Dimensionally, Sonic didn’t differ a whole lot from Aveo, but it was otherwise radically different than that subcompact. The interior: new. The chassis/platform: new. The engines: new (to this car anyway, not to new GM or Chevrolet).

In addition, Sonic gained a whole mess of connectivity and convenience features designed to appeal to the tech-savvy and/or those who desire some more upscale amenities without having to spend a ton of cash.

Naturally, Sonic was front-wheel drive. It borrowed its engines from the larger Cruze. Standard across the board was a 138-horsepower 1.8-liter 4-cylinder engine that paired with a 5-speed manual transmission. The manual included a hill-holder clutch A 6-speed automatic was optional and included remote engine start on the LTZ.

The Cruze’s 138-horsepower turbocharged 1.4-liter 4-cylinder engine was available on Sonic. This motor paired with a 6-speed manual or a 6-speed automatic transmission.

The Chevrolet Sonic had a standard complement of expected and federally mandated safety features. Above and beyond this, Sonic had standard rear-side airbags and front-knee airbags.

Sconic borrowed its engines from the larger Cruze. Standard across the board was a 138-horsepower 1.8-liter 4-cylinder engine that pairs with a 5-speed manual transmission. The manual includes a hill-holder clutch A 6-speed automatic is optional and includes remote engine start on the LTZ.

Sonic is smaller and lighter than the Chevy Cruze, but it shares the same engines. As such, Sonic is marginally faster in all situations. It has decent pep from a stop, but highway passing and merging require some forethought. The automatic transmission, when paired with the 1.8-liter engine works well, with crisp, timely shifts. The manual transmission is fun to shift, with a meaty, solid feel you wouldn’t typically expect from a subcompact car. The 1.4-liter with automatic is close to, but not quite up to, the manual-shift car’s vigor.

In Consumer Guide testing, we averaged 30.4 mpg with a 1.8-liter model and 26.9 with a 1.4-liter. Both were equipped with a manual transmission and were driven mostly in the city. All Sonic models use regular-grade gas.

Suspension tuning is the same among all models. Differences in ride quality come down to tire size. LTs have 15-inch wheels while LTZs use 17s. Regardless, Sonic rides firmly for the class. Due to its solid body structure, however, there’s no harshness or undue motions.

Handling is a cut above the class norm. Sonic has sharp steering and great grip, especially the LTZ, on account of its larger wheels and tires. Body lean is noticeable in very fast cornering, but the car is otherwise well composed. The sedan has a bit more rear overhang than the hatchback; in a brief side-by-side comparison of LTZs, the hatchback felt a little more nimble in spirited cornering.

Both the 1.8- and 1.4-liter engines can be heard during acceleration, but they fade away at cruising speeds. Wind noise is apparent from around the exterior mirrors, and the tires rumble somewhat loudly on coarse pavement.

Most controls are simple and handy. The unconventional instrument panel takes some of its design cues from motorcycles with an analog tachometer and digital speedometer. It’s compact but isn’t difficult to read in most conditions. Note, though, if you have the headlights on, the speedometer display might be too dim, even with the backlight set to maximum. Controlling the odometer and trip computer takes some acclimation, but you adjust quickly enough. The climate controls are mounted low on the central dashboard stack, but their rotary knobs are easy to operate. The audio deck is higher on the dashboard and incorporates a design that’s simpler to use than the Cruze.

Like many Chevrolet vehicles, Sonic’s interior presents well at a distance, but closer inspection reveals apparent cost cutting. Most of the door and dashboard panels are fashioned from nicely textured but hard plastic. The only padding available is on the armrest attached to the right side of the driver seat. LTZ’s contrast stitching adds a sporty flair.

The optional sunroof slightly reduces front headroom. Otherwise, Sonic has plentiful headroom and legroom in front. The seats are comfortable, but those of wide carriage might find the side bolsters too confining. Only the driver gets an inboard armrest; no center console is available, so front passengers have no place to rest their left elbows. Visibility is decent, but the view to the rear corners is partially obscured by thick roof pillars.

Overall space is competitive with most compact cars. Rear legroom is fine for an adult of about 5’9″ sitting behind another of similar stature. Rear headroom is plentiful in the hatchback, but the sedan’s sloping roof line cuts into it a bit.

Sedans have a surprisingly large trunk with a wide aperture and low liftover. Hatchbacks are pretty versatile, too, LT and LTZ versions benefit from a handy under-floor storage space. Both body styles have split-folding rear seat backs. In the LT and LTZ hatchback, they fold flat with the cargo floor. In the sedan and LS hatchback, they rest slightly above it, which will complicate loading larger items. Sonic’s two gloveboxes are handy. The top one houses the auxiliary stereo and USB input ports. Chevrolet thoughtfully includes a cutout for the cable, and any connected device can rest in a small pod on either side of the audio deck. There’s a shallow tray on top of the dashboard, a small cubby beneath the climate controls, door map pockets, and a total of three cupholders that make up the car’s interior storage.