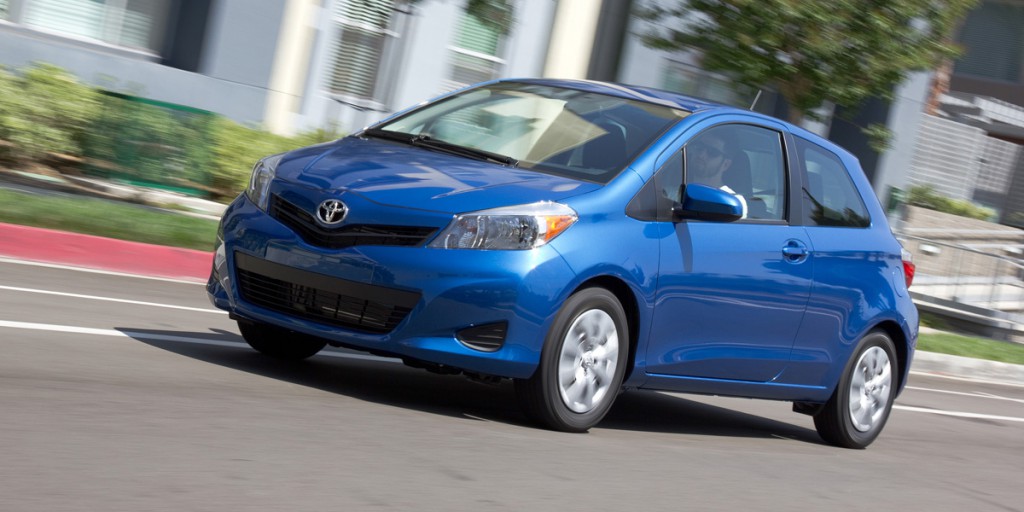 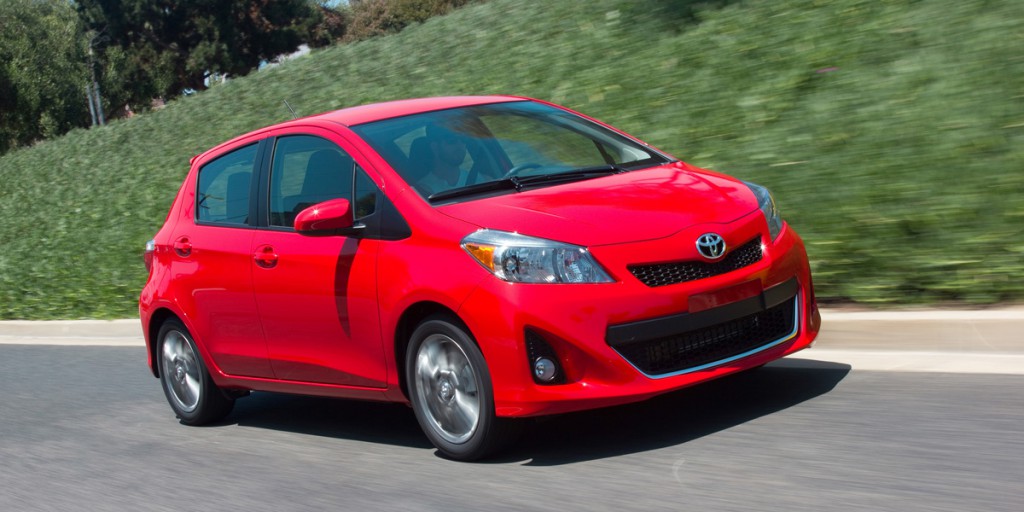 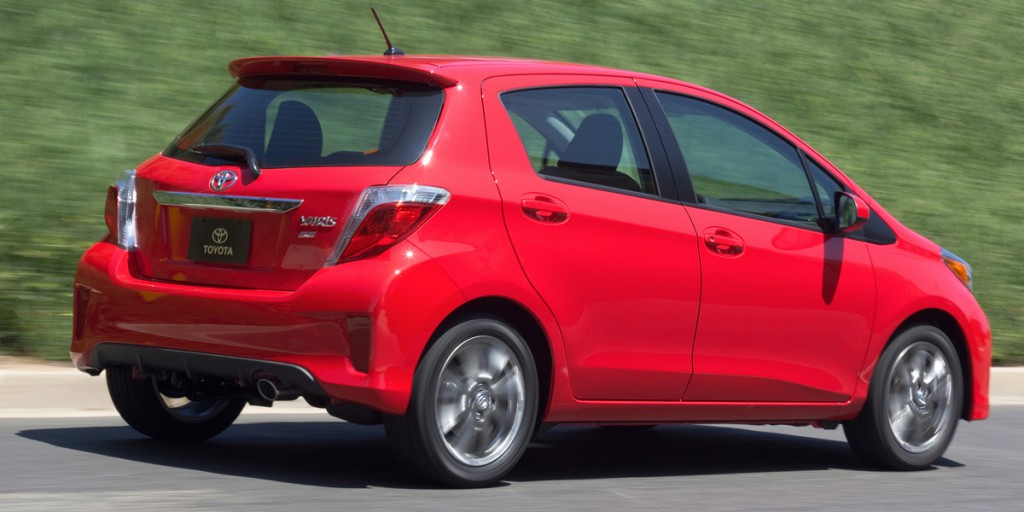 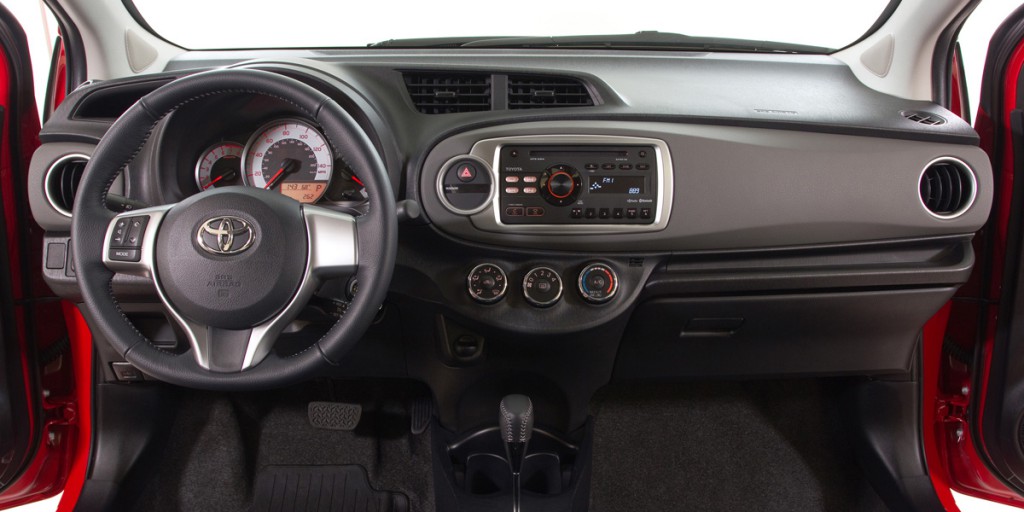 On its own, the Yaris is a pleasant subcompact that will more than meet the needs of shoppers in this class. It’s decently roomy and pretty reasonably priced given the fact that you can get some unusual features, such as an HD Radio receiver. Unfortunately, when you put the Yaris up against its contemporaries, it falls a bit flat. Rival subcompacts best it in a variety of areas, from passenger and cargo flexibility to noise suppression and overall refinement. Don’t discount this Toyota entirely, but be sure to test drive the competition too.

The 2012 Toyota Yaris was redesigned. It was a front-wheel-drive subcompact car offered in 2-door and 4-door hatchback body styles. It was about 2 inches longer in wheelbase and 3 inches longer overall than the 2011 Yaris hatchback. The previously available sedan body style was dropped.

The Yaris lineup consisted of the base L, volume LE, and top-line SE. The L and LE are available in 2- and 4-door form while the SE is a 4-door only.

Though the L had a comparatively spartan level of equipment, some of the highlights include power locks, USB port, Bluetooth (from 2013), and an HD Radio receiver. The LE added cruise control, a height-adjustable driver seat, split-folding rear seat backs, power windows, remote keyless entry, an upgraded audio system, and satellite radio. The SE was a sport-themed model and as such, it had 4-wheel disc brakes, tachometer, fog lights, a spoiler, sport suspension, and 16-inch alloy wheels (up from the 15s on the L and LE).

Options included a first-aid kit, floormats, and other dealer-installed accessories.

All models used the same engine, a 106-horsepower 1.5-liter 4-cylinder. A 5-speed manual transmission was standard on the L 2-door and SE. Optional on those models and standard otherwise was a 4-speed automatic. As expected, Yaris was front-wheel drive.

With manual transmission, the Yaris was EPA rated at 30 city/37 highway. With the automatic, it received a 30/36 rating. Regular-grade gas was recommended.

All models a 106-horsepower 1.5-liter 4-cylinder. A 5-speed manual transmission is standard on the L 2-door and SE. Optional on those models and standard otherwise is a 4-speed automatic. As you would expect, Yaris is front-wheel drive.

Yaris is not particularly snappy from a stop. Its best showing comes at higher engine speeds, where it can deliver decent oomph. Other than some abrupt kickdowns when flooring the gas pedal, the “old-school” 4-speed automatic feels very smooth. No manual models have been made available for testing.

In Consumer Guide testing, our automatic-transmission test cars averaged 28.8 in mostly city driving and 30.9 mpg with an even balance of city and highway driving. Those aren’t outstanding results, given that the EPA rates this car at 30 mpg in the city. Yaris uses regular-grade gasoline.

LE models smooth out small bumps reasonably well, but rough road surfaces can reverberate through the cabin, making the car feel a bit jittery. However, Yaris’ highway ride is a bit better than might be expected of a subcompact. Yaris SE has a stiffer sport suspension, so sharp bumps occasionally register with a jolt.

More maneuverable than sporty. Yaris is fairly nimble, mostly on account of its tidy size. The steering is nicely weighted, though we think its turning radius is a bit larger than it ought to be. Grip is fine, especially with the SE’s 16-inch wheels.

The engine is at its most powerful at higher rpm, but it’s also the most vocal there. The noise it makes isn’t particularly refined, either. Wind and road noise grow as speed does, too, to the point where you have to turn the radio up quite dramatically to hear it when on the highway.

Yaris’ control and instrument layout is more conventional than its predecessor. Gauges are mounted in a pod in front of the driver, rather than atop the center of the dashboard. The climate controls consist of large, easy-to-access rotary knobs. The audio system takes quite a bit of acclimation. Several basic controls are out of easy reach. We suspect this is the result of Yaris originally being a Japanese domestic market right-hand-drive vehicle. The Bluetooth system deserves praise for its simple operation and fast connection when you start the car. The system supports audio streaming, which is a good thing because the auxiliary stereo and USB input jacks are inconveniently located inside the glovebox.

Interior assembly quality is good, but the materials are especially lackluster and padded surfaces are very scarce. However, the unconventional textures on the dashboard come off surprisingly well. Overall, the ambiance feels a step behind the class leaders.

Overall front-seat space is fine, and the vast majority of adults should have no issues with headroom or legroom. Several testers bemoaned the lack of a center armrest. The steering wheel tilts, but it has a very limited range. The seatbelts don’t adjust for height.

Yaris has decent rear headroom and passable legroom for a subcompact. The seat seems a bit thinly padded. You wouldn’t necessarily want to stick anyone back there for a cross-country road trip, but comfort is more than adequate if you’re part of the local car pool. As expected, entry and exit is much more challenging in the 2-door.

The cargo area is kind of short and rather narrow. On the plus side, the rear seat backs fold nearly flat and sit level with the floor. The interior has several small storage bins, but no center console.