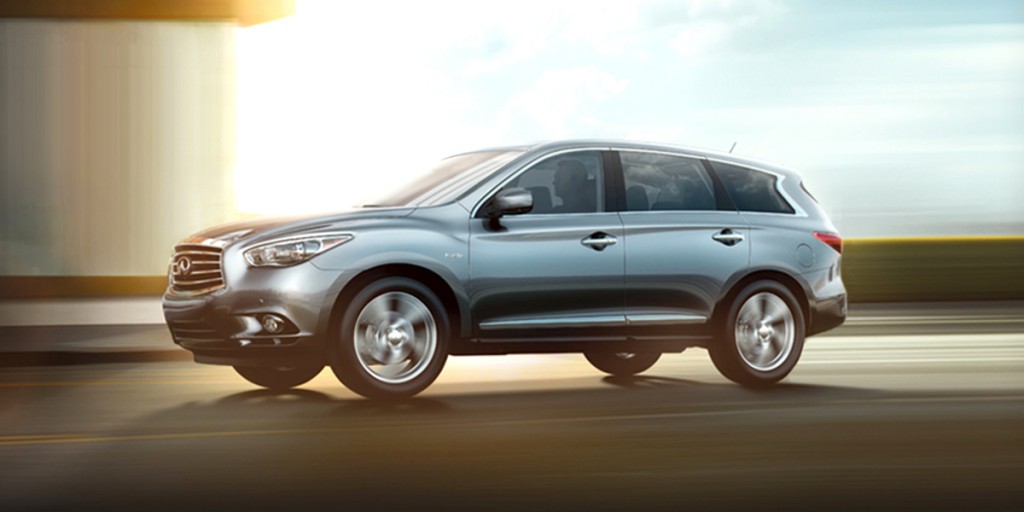 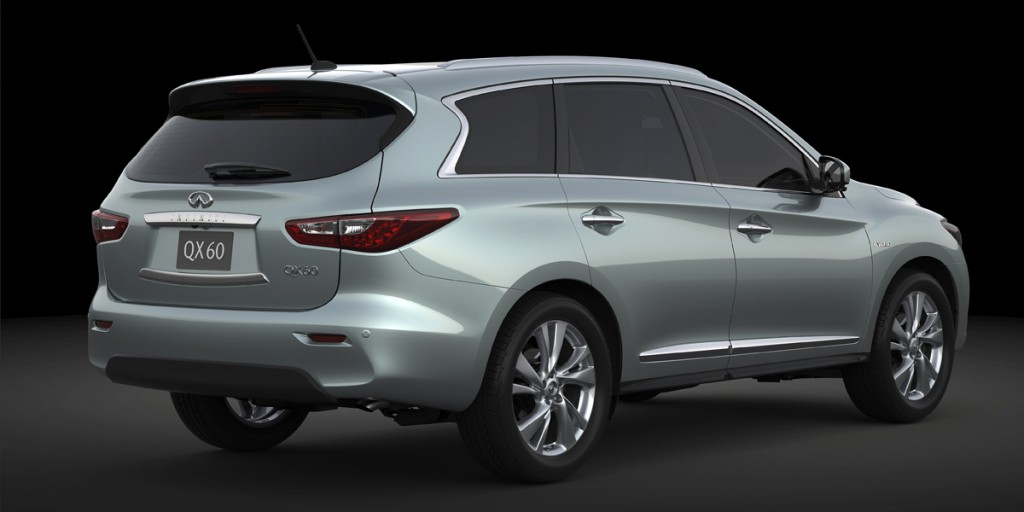 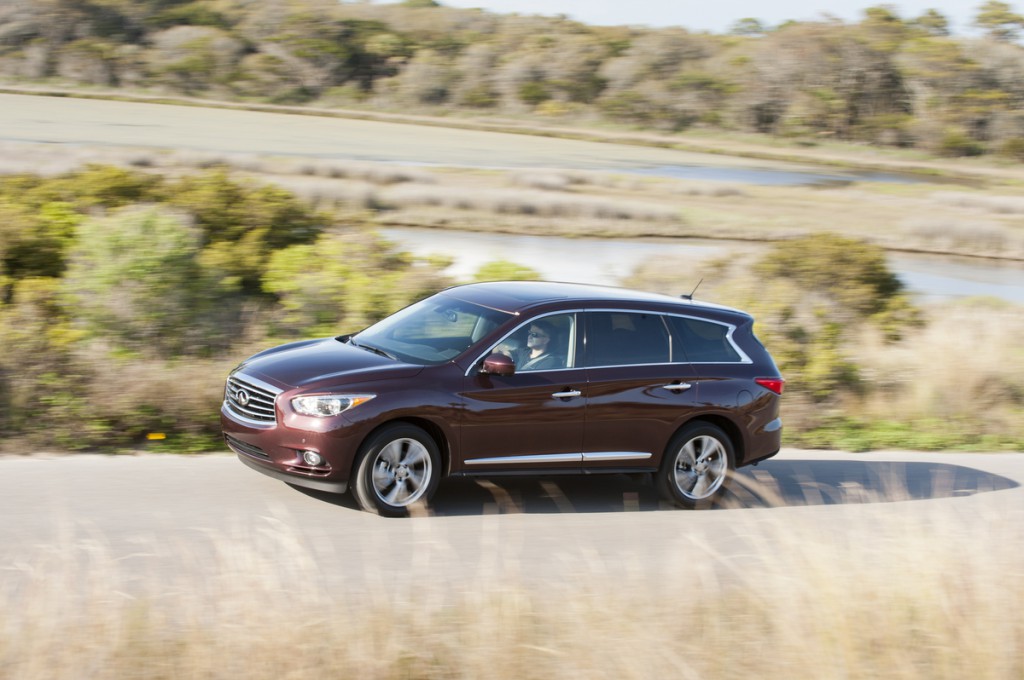 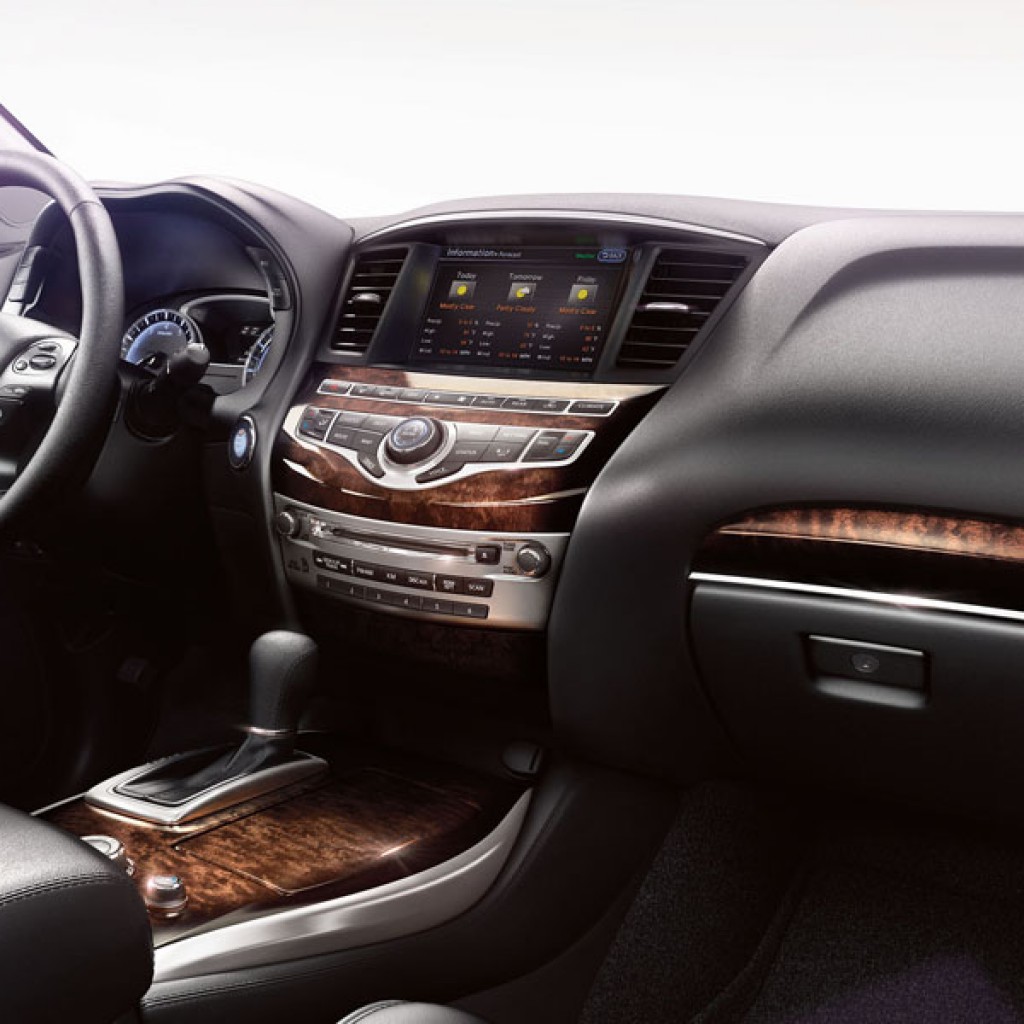 JX does a terrific job filling the gap in Infiniti’s product lineup between the sporty FX and large QX56. Urbane cabin appointments with simple (for the class anyway) controls and a serene driving experience are reasons that JX is a Best Buy (2013-14).

JX was Infiniti’s first 7-passenger crossover SUV. It filled the gap in Infiniti’s product line between the midsize 5-seat FX crossover and 7-seat premium-large QX56. The latter used body-on-frame truck-type construction while the JX employed a car-type unibody design. Infiniti was no stranger to 7-passenger SUVs, but this was its first effort at a crossover with such capacity. Infiniti revamped its model names for 2014, all SUVs started with a “QX” prefix. The JX became QX60.

The JX was built in the United States. It competed against similar 7-8-passenger premium-midsize crossovers such as the Acura MDX, Buick Enclave, and Volvo XC90.

JX came in a single Base trim level. That was a bit of a misnomer, as this SUV had plenty of standard luxury goodies, including leather upholstery, heated power front seats, a power tilt and telescopic steering wheel, tri-zone automatic climate control with rear controls, keyless access/engine start, a power sunroof, and power tailgate.

Like the FX crossover, Infiniti offered the JX with optional all-wheel drive. Unlike the sporty rear-drive 5-passenger SUV, the JX came standard with front-wheel drive.

Rather than the 3.7-liter V6 engine found in Infiniti’s G coupe, sedan, and convertible, Infiniti elected to equip the JX with a 265-horsepower 3.5-liter V6. In a first Infiniti, the JX’s sole transmission was a continuously variable unit (CVT) that behaved like an automatic.

JX was equipped with a 265-horsepower 3.5-liter V6. The sole transmission was a continuously variable unit (CVT) that behaved like an automatic.

JX is at a disadvantage in horsepower compared with its rivals. It weighs significantly less, though, so that deficit is not as pronounced. It doesn’t feel underpowered, though highway passing and merging muscle is a bit lacking. The continuously variable transmission works exceptionally well, allowing JX to tap into resources it does have when power is needed.

All models tested were equipped with the optional 20-inch wheels. So equipped, JX generally acquits itself well. Road construction and other pavement irregularities occasionally spoil the experience, but this was not common. We expect the standard 18-inch wheels to deliver a smooth ride, but the 20s are unavoidable if you want the optional Deluxe Touring and Technology packages.

Handling is not what you’d call sporty, and JX does feel a bit on the large side. Still, handling is surprisingly good. Steering feel is par for the course, if maybe a bit too light at higher speeds. The brakes provide adequate stopping control, but pedal feel is less firm than we would like.

The overall ambience is hushed, with only trace amounts of road and wind noise at speed. The engine is a bit of a let-down, lacking the snarl we expect (and like) in many of Infiniti’s other vehicles. JX’s engine is essentially the same as its corporate cousin, Nissan Murano, and it sounds just like it.

Infiniti is one of the best automakers when it comes to uncomplicated control schemes, and the JX is no exception. Audio, climate, and navigation functions blend nicely via a combination of an easy-to-reach touchscreen, physical buttons on the central dashboard stack, and redundant steering-wheel switches. We’ve often complained about Infiniti’s incorporation of various safety systems, making features difficult, if not impossible, to completely disable. JX addresses this concern. Items such as blind-spot alert and lane-departure warning can be shut off completely (and not be automatically enabled after a restart) via steering-wheel switches and a central instrument-panel screen. The systems were also less intrusive than on other Infiniti models we’ve tested, though the JX’s lane-departure alert did suffer from a few false positives. One test vehicle suffered from a fault in the navigation system where it refused to provide voice guidance, even though the feature was enabled.

Everything looks and feels high class in the JX’s cabin. Soft-touch surfaces abound. Many design touches, such as door-panel trim that mimics part of the vehicle’s rear-end styling, are visually interesting.

Legroom is plentiful up front. Headroom is also surprisingly expansive, even beneath the sunroof housing. The bucket seats provide good lateral bolstering, though the long of leg might wish for more thigh support. Tall 2nd- and 3rd-row headrests compromise the view directly aft. Thick rear roof pillars hurt over-the-shoulder visibility, making blind-spot alert a worthwhile option. In controlled demonstrations of Infiniti’s new Backup Collision Intervention, the system was able to stop the vehicle before it backed into a stationary object.

Infiniti boasts the 2nd row can slide more than 5 inches fore and aft to benefit passenger or cargo room. Further, the seat can slide forward with a child booster seat in place and still allow access to the 3rd row. In practice, JX has decent to excellent 2nd-row legroom, depending on where the seat is positioned. While adults can fit in the 3rd row, the seat in front needs to be pretty far forward to avoid squished legs and knees. Thus, the rearmost bench is best reserved for kids.

Both the 2nd- and 3rd-row seats fold flat to create a fairly expansive cargo area. The load floor is flat but not quite level, though. JX sports a very handy covered well behind the 3rd row. Cabin storage consists of a decently sized glovebox and a nice, deep center console. The wireless headphones included in the optional Theater Package take up almost all the space in the console box, so plan accordingly.