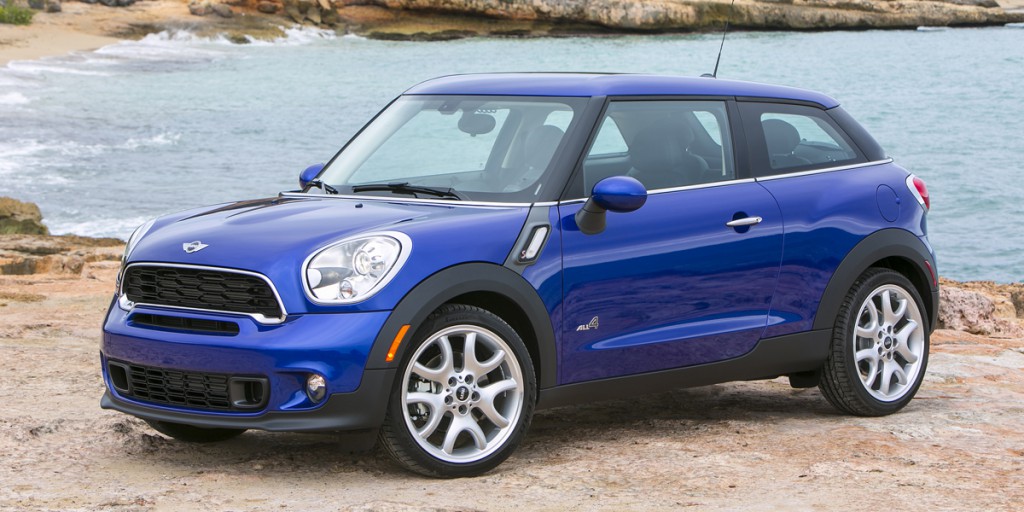 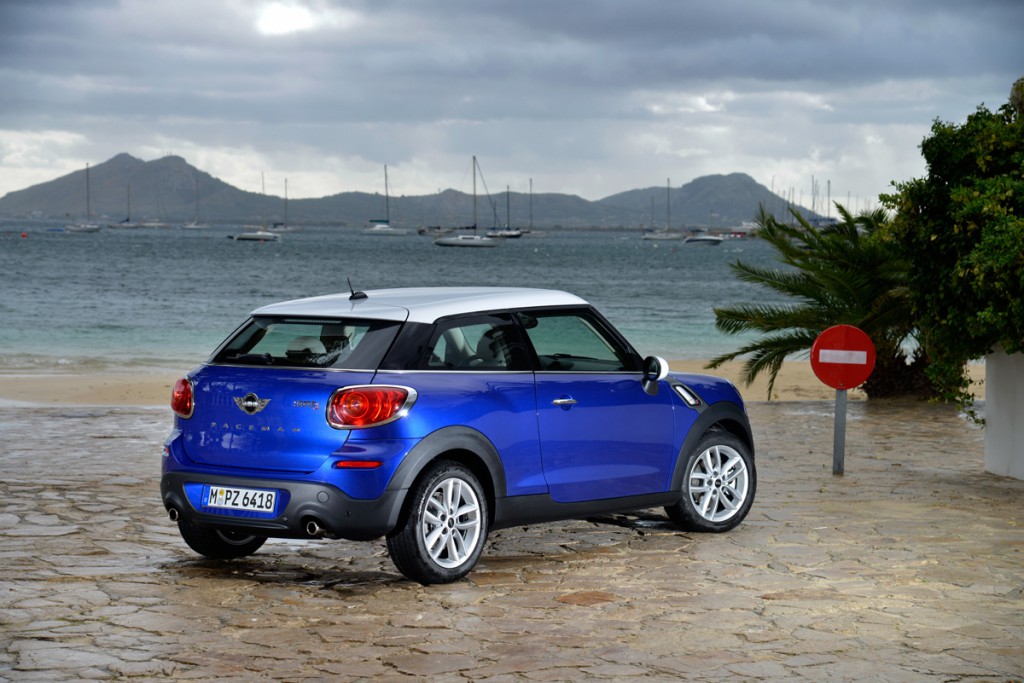 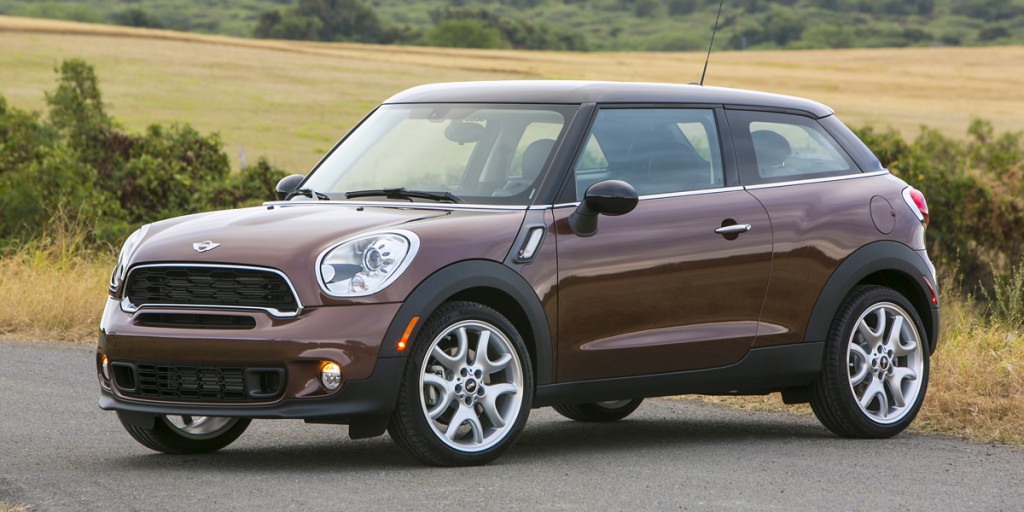 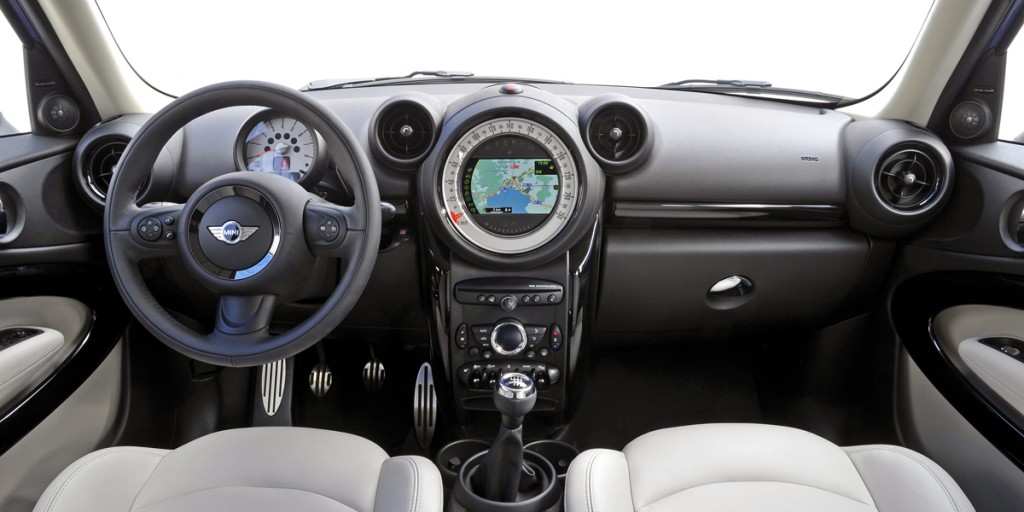 The Cooper Paceman is a unique vehicle because it has the qualities of an SUV (relatively high ride height, a wagon body style, and the availability of all-wheel drive), but only two doors. Most of its competitors are compact SUVs, all of which have the functionality of four doors and generally more overall interior space. But Paceman is marginally quieter and smoother riding than the similar Mini Cooper Countryman, which has four doors. For some buyers, the Paceman’s unique 2-door styling will outweigh the corresponding compromises in practicality, but most buyers will probably find the Countryman a more logical choice.

The Mini Cooper Paceman arrived for 2013 as the second SUV and the seventh discrete model from this BMW-owned British brand. It was basically a 2-door version of the 4-door Cooper Countryman compact crossover, but with sportier styling and less off-road flavoring. Mini termed Paceman a “sports activity coupe” for “cutting a swathe through the urban jungle.”

The Paceman shared the Countryman’s choice of front-drive and available “ALL4” all-wheel drive, as well as powertrains and most other features. It was fractionally longer than the Countryman, stood about an inch lower, and had a sloping roofline instead of a level surface. Paceman was otherwise dimensionally close to the Countryman, but sat four only, rather than five as standard.

As one of the few 2-door SUVs on the U.S. market, the Paceman had little direct competition. Though the Kia Soul and Nissan Juke were arguably closest in character and price among mass-market brands, some saw the Paceman as a rival for the premium-class Land Rover Range Rover Evoque.

Like the Countryman, the 2013 Mini Cooper Paceman was offered in four versions: front-wheel-drive base and S, and all-wheel-drive S ALL4 and John Cooper Works (JCW). Mini said all models included a sport suspension with a lower ride height versus Countryman. Run-flat tires on alloy wheels were also standard across-the-board, with 16-inch rims for base models and 17s for all S versions. The JCW received 18-inch wheels and offered 19s at extra cost.

The 2013 Mini Cooper Paceman was sold only as a 4-passenger vehicle with sport front bucket seats and individual rear seats. Paceman’s rear seats slid fore/aft up to five inches to balance passenger and cargo space; they could also fold to expand the rear load deck. In addition, all Paceman models came with the center-rail storage system that was optional for Countryman. This involved specially designed “utensils”–sunglasses case, cellphone cradle, extra cupholders, etc.–that could be clipped to metal guides between each pair of seats. A full-length rail was optional.

Other base-model features were more or less the same as for the entry-level Countryman. That meant vinyl upholstery, a leather-wrapped tilt/telescopic steering with audio and cruise controls, a steering-column-mount tachometer, remote power door locks, a cooled glovebox, and an AM/FM/CD stereo with HD radio tuner, Bluetooth connectivity, and media-player plug-in.

Like Countryman and all other Mini Coopers, the Paceman offered numerous options, with many major items available both separately and in packages. The Paceman was available with a Countryman-like selection of Premium, Sport, Technology, and Cold Weather Packages. These encompassed such features as automatic climate control, keyless access/engine-start, rear-obstacle detection, rain-sensing wipers, heated front seats and door mirrors, and a “sport” traction-control system that could be fully disabled at the driver’s discretion.

Among the most notable standalone options were a panoramic sunroof, steering-linked xenon headlamps, premium harmon/kardon audio, and a navigation system with Mini Connected. The last was an infotainment/vehicle-systems control interface than could also be used with data-plan-enabled smartphones and downloadable apps. Once the phone was configured and paired with the car, Mini Connected could access streaming Internet radio, RSS news feeds, Facebook, Twitter, and other online resources.

Like other Mini Coopers, the Paceman used a 1.6-liter 4-cylinder engine with direct fuel injection and tuning specific to each model. The base version produced 121 horsepower, while the S and JCW engines added a turbocharger to achieve 181 and 208 horsepower, respectively. Both turbo engines included an “overboost” feature that provided extra power in brief bursts under certain operating conditions. All models offered a 6-speed manual transmission or an optional 6-speed torque-converter automatic with manual-shift feature and, base model excepted, steering-wheel shift paddles.

As noted, the Cooper and Cooper S were front-wheel drive, while the Cooper S ALL4 and JCW had standard all-wheel drive. As on the Countryman, the AWD used an electronically controlled center differential for apportioning power between the axles. The system normally provided a 50/50 front/rear split, but could direct up to 100 percent power to either axle in extreme conditions.

The 2013 Mini Cooper Paceman came with expected and federally required safety features including antilock brakes (ABS), stability system, and traction control, plus front and curtain side airbags and a front-passenger knee airbag. Rear side airbags were not offered. The available all-wheel drive and standard run-flat tires could be regarded as safety-related enhancements along with the manual transmission’s hill-holder clutch.

Like other Mini Coopers, the Paceman used a 1.6-liter 4-cylinder engine with direct fuel injection and tuning specific to each model. The base version produced 121 horsepower, while the S and JCW engines added a turbocharger to achieve 181 and 208 horsepower, respectively. Both turbo engines included an “overboost” feature that provided extra power in brief bursts under certain operating conditions. All models offered a 6-speed manual transmission or an optional 6-speed torque-converter automatic with manual-shift feature and, base model excepted, steering-wheel shift paddles.

Our road-test of the Cooper Paceman was conducted during rainy conditions. Paceman mostly apes the performance of the Countryman given that the former uses the same powertrains and a modified version of the latter’s basic design. Paceman S ALL4 suffers some turbo lag, but feels quick thanks to its all-wheel-drive system that tends to mitigate torque steer. The automatic transmission is mostly smooth and responsive, but takes a tick longer than one would expect to downshift. The manual-shift paddles mounted on the steering wheel help, but they also take longer than expected to execute a downshift. Oddly, both paddles induce an upshift by pulling on either one, and pushing them forward brings a downshift; most vehicles assign upshifting to the right paddle and downshifting the left paddle. Once acclimated, however, the action is second nature.

Our test vehicle was equipped with 19-inch run-flat tires, which, with their hard sidewalls, produced a bumpy ride, but it is somewhat better than the Countryman, likely due to different suspension settings.

Due to its taller build and heavier curb weight, the Paceman lacks the go-cart agility present in the smaller Mini Coopers. Paceman retains Mini’s fun-to-drive nature due to sharp steering response, little cornering lean, and smooth brakes. The “Sport” button firms up the steering and quickens dynamic responses, but the differences are small.

Though the Paceman is quieter inside than the related Countryman, it still exhibits some engine and road noise. The engine makes a ruckus when accelerating quickly, but it quiets down nicely when cruising. The tires transmit road noise into the cabin, especially on uneven pavement.

Like other Minis, the controls are laid out in an unconventional arrangement that favors aesthetics over function. The speedometer is mounted in the center of the dashboard; the pointer that indicates speed and the numbers on the dial are small and hard to see at a glance. However, the tachometer that is mounted to the steering column has a handy digital speed display in its face. The infotainment system sits in the center of the speedometer, and it is governed by a small joystick on the floor of the center console immediately behind the shifter; this setup proves tedious to operate while driving. The other buttons are mounted low on the central control panel, and some of the switches are of a look-alike toggle type labeled with small icons.

The interior is made up of a mixture of hard and soft-touch plastics designed in such a way as to appear whimiscal and high-end. Most of the interior feels fine, but some panels feel low-grade. The center rail storage system, while a unique idea, just doesn’t follow through because the optional attachments feel cheap, must be purchased separately, and it takes some study to secure them correctly to the rail. The cupholder attachment will not hold much else besides small-size beverage containers and they fall out easily if bumped by the shifter. Interior ambient lighting can be cycled through several colors, but it is a feature some of us could live without.

The Paceman’s tall build furnishes plenty of front-seat headroom and legroom for tall occupants despite its high-mounted seats. Large door openings make entry and exit easy. The optional leather-upholstered seats are comfortable, offer good support, and hold occupants in place around fast turns. The tilt and telescopic steering wheel helps tailor a good driving position. The view out the front and sides is good; over-the-shoulder visibility is OK, but is hampered somewhat by wide rear roof pillars.

The sloping roofline pinches headroom a bit in the back seat for those over six feet tall, but most others will fit just fine. Legroom is cozy, and gets tight if the front seats are pushed back all the way. Entry and exit require some twisting and squeezing, but there is a latch on the rear-outboard side of the front seats that allows the rear-seat passenger to tilt and fold the seat out of the way for exit. The seats are buckets separated by the center rail storage system.

Behind the rear seats, there is a decent amount of storage for three average-size suitcases, comprising 11.6 cubic feet, according to Mini. When the seats are folded, it opens up 38.1 cubic feet. The rear seat does not fold flat and the cargo cover must be unhooked and stored somewhere when hauling large items. Cabin storage includes the glovebox and door pockets. A center console with small storage box is optional and hooks into the center rail.