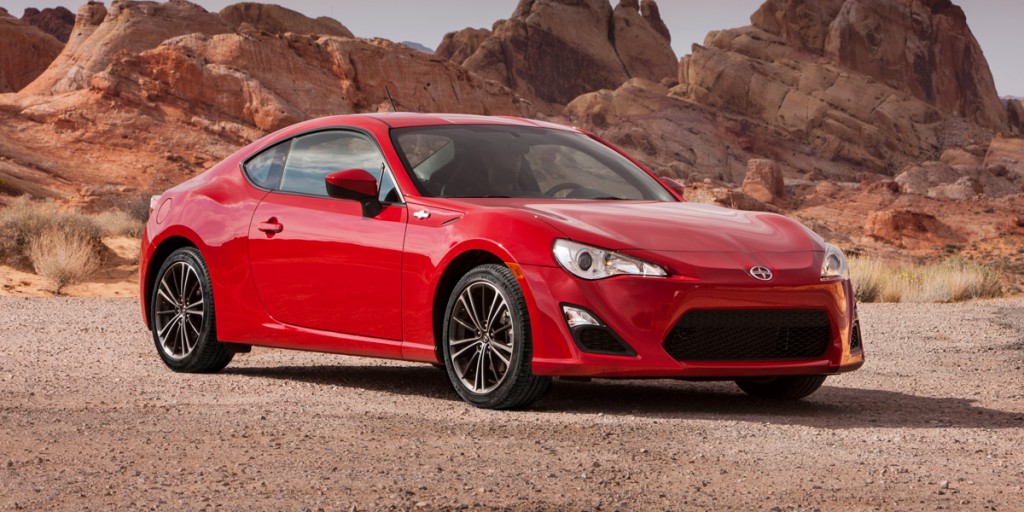 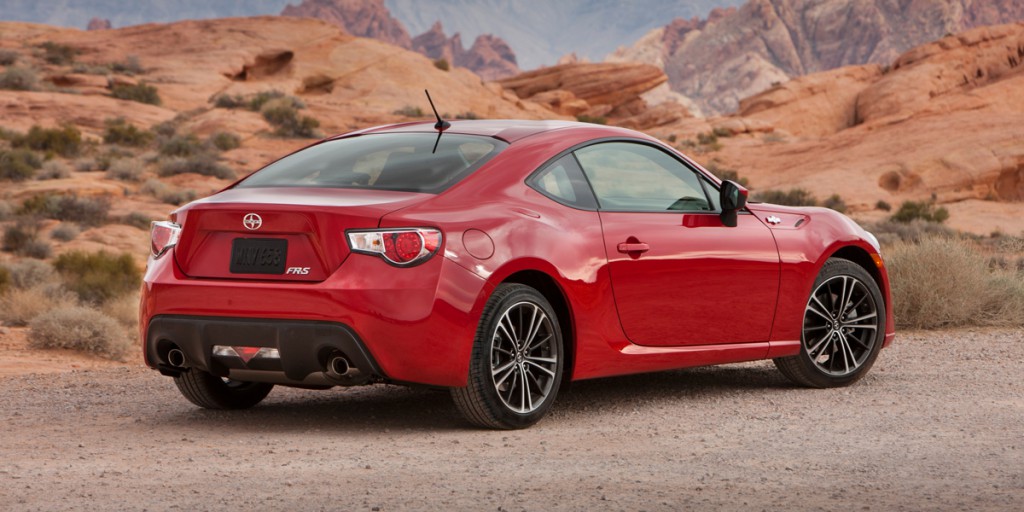 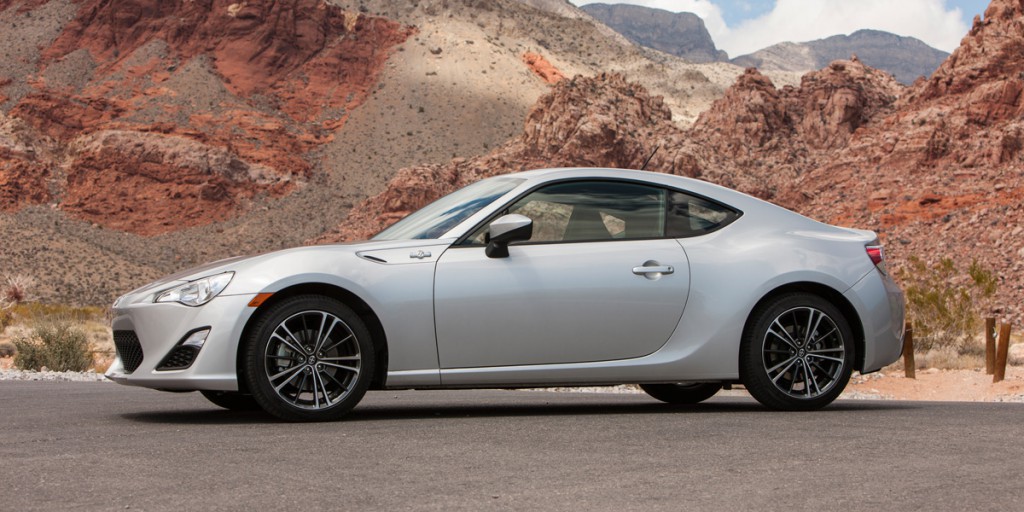 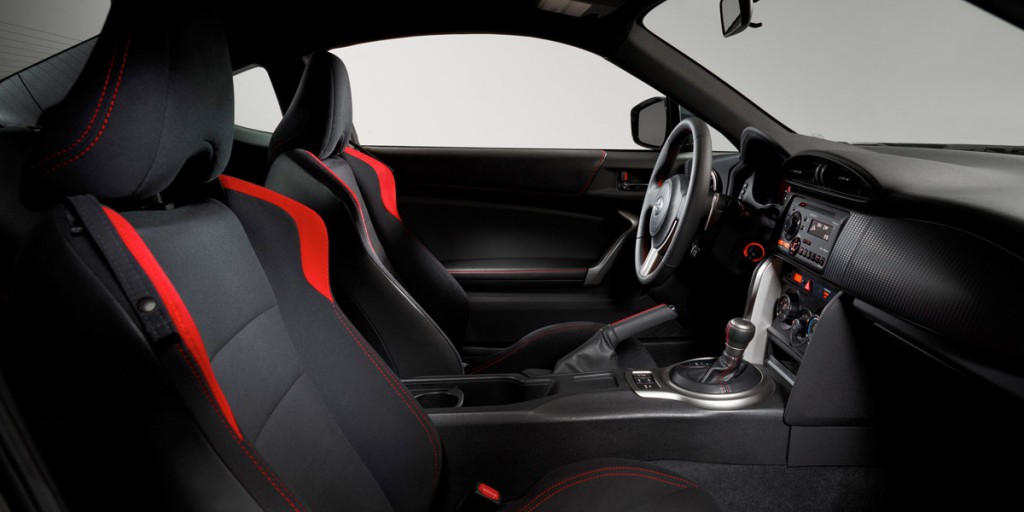 The Scion FR-S is almost in a class by itself. It has respectable performance credentials, a fun-to-drive personality, and surprisingly modest pricing. Other relatively affordable 4-cylinder sporty/performance cars include the Mazda MX-5 Miata and Hyundai Genesis Coupe, along with this Scion’s near twin, the Subaru BRZ. The Mazda is great fun to drive and it is a convertible body style, but it lacks a back seat and can’t match the FR-S’ greater practicality. Though the Genesis Coupe base model cost less when new than the FR-S, it weighs more and lacks the FR-S’ level of standard equipment. Also, neither of those cars offer an array of stand-alone accessories and certain features can be found only in option packages or higher trim levels. Enthusiasts in the market should take a hard look at the FR-S. Besides the standard sports-car vices of a somewhat firm ride, barely habitable back seats, and somewhat poor rear-corner visibility, the FR-S makes up for those demerits with lively performance, good projected fuel economy, and unusual-for-the-class levels of comfort and daily drivability.

The Scion FR-S was a new model for 2013. This vehicle was co-developed with Subaru. That company’s vehicle, the BRZ, shared the majority of its design and powertrain with the Scion FR-S.

Also standard was a tachometer with programmable shift indicator that could be set above 2,000 rpm at 100-rpm increments. It illuminated a light on the tachometer and sounded a chime to tell the driver to shift to the next gear when the preprogrammed engine speed was reached.

The 2013 Scion FR-S was powered by a 200-horsepower 2.0-liter horizontally opposed 4-cylinder engine. The company touted its “boxer” cylinder layout and its inherent lowered center of gravity as an aid to sporty handling. The engine used both direct gasoline injection and conventional port injection as needed to balance horsepower and fuel economy. It was paired with a 6-speed manual transmission or a 6-speed automatic. The FR-S was rear-wheel-drive.

The FR-S’ traction control and antiskid system could be configured in different modes. Meant for enthusiastic driving on a racetrack, each of the four modes progressively bumped up the thresholds of electronic intervention, allowing more wheel slip and lateral sliding to benefit performance and handling. The automatic transmission also had “sport” and “snow” modes that used different shift-pattern programming depending on driving conditions.

The Scion FR-S was furnished with many expected safety features. Among them ABS, traction control, antiskid system, front-side airbags, and curtain-side airbags.

The Scion FR-S is powered by a 200-horsepower 2.0-liter horizontally opposed 4-cylinder engine. The engine uses both direct gasoline injection and conventional port injection as needed to balance horsepower and fuel economy. It is paired with a 6-speed manual transmission or a 6-speed automatic. The FR-S is rear-wheel-drive.

The FR-S’s off-the-line acceleration is decent with either transmission, but power comes on stronger in the middle of the powerband all the way up to redline. FR-S has good highway passing power, and while a downshift helps, it is not necessary. The manual shifter has positive action and short throws, and the clutch is easy to modulate with good feel. The automatic transmission and its paddle shifters are fast to respond to inputs and will hold low gears if requested for best performance.

The suspension is somewhat firm, but stops short of being harsh. Most bumps and dips are felt, but rarely shock the chassis.

The steering requires moderate effort and gives good road feedback and steering feel. The FR-S handles like the sports car it is. It rounds corners crisply with very little body lean. Rapid changes of direction are handled predictably with little drama. Some understeer is present around fast, tight corners. The FR-S’ adjustable traction control and antiskid system can be set for varying degrees of intervention. Brakes are strong and bring the car to a halt quickly. Pedal feel is reassuringly firm.

The Scion FR-S is quieter than comparable sporty/performance cars such as the Hyundai Genesis Coupe. Highway cruising below 75 mph is relatively calm and conversation at a normal volume is easy. Over that speed, some wind noise from the outside rearview mirrors and noise from the rear tires is present, but not disruptive. Over 4,000 rpm, the engine produces a sporty growl. Below that, the engine produces a pleasing tone.

The climate controls are comprised of rotary knobs that are easy to decipher and use at a glance. The standard radio has some small buttons that are cryptically marked. Other radio controls are laid out in unconventional circle arrangements on the face of the unit that can be confusing at first. The optional touchscreen infotainment system places the main controls on a touch-sensitive panel above the volume knob that requires a look from the road to operate. Other infotainment functions are absorbed by the touchscreen itself. Thankfully, the climate controls are unaffected by this optional system. Interestingly, the steering wheel is entirely devoid of buttons for audio or the wireless cellphone link. A cruise-control stalk resides on the lower back of the steering wheel. The instrument cluster has a center-mounted tachometer with a digital speedometer readout, along with a conventional speedometer, fuel gauge, and temperature gauge.

The interior is comprised of nicely grained and soft-touch plastics. The standard leather-wrapped steering wheel is padded, and the tops of the door panels and armrests are covered in padded, perforated leather. The standard seats are upholstered in a suede-like material; leather is optional.

The front cabin is decently roomy for a sports car. Controls are within easy reach. The seats are relatively comfortable and supportive. They have side bolsters that hold occupants in place around corners, but larger occupants may feel restricted. The driver’s seat includes enough adjustments that most people will be able to find a comfortable position. Visibility is good to the front, sides, and rear, but the rear corners can be blocked by the roof pillars. Headroom is adequate for six footers. Entry is easy, but exit takes some effort, owing to the car’s low stance.

The rear seats are only suitable for children, but could be used by adults in a pinch for short trips. With the front seat adjusted for a six footer, there is a miniscule amount of rear legroom. Headroom is tight for anyone over 5′ 9″.

The FR-S’ trunk is wide and long, but not particularly tall. The rear seat back folds down for more room. Scion claims there is room in the car for four standard FR-S tires: two in the trunk and two on top of the folded seat back. Also, the company claims the trunk can accommodate two golf bags. The front seat includes an open center console bin with a repositionable/removable cupholder tray, a short but deep storage slot in front of the shifter, a bottle holder in each of the doors, and a glovebox.