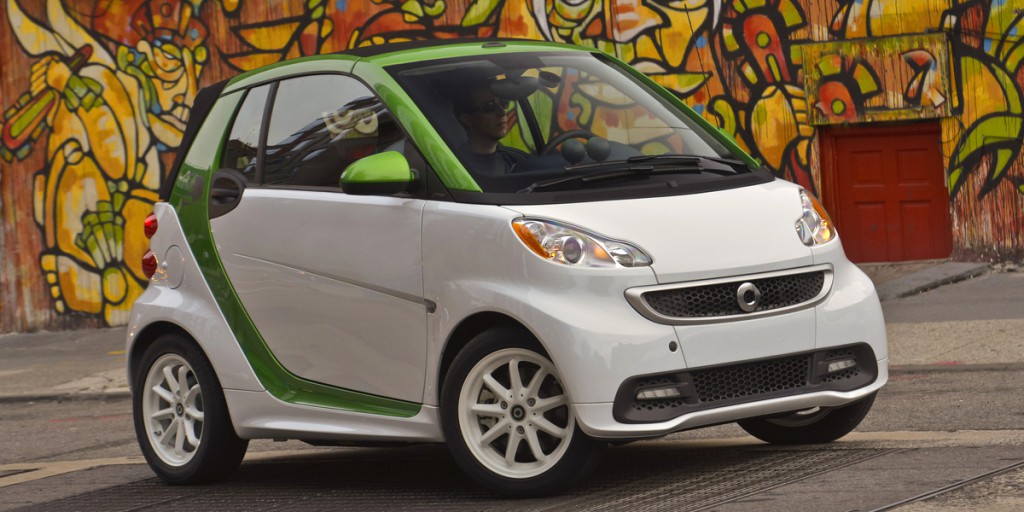 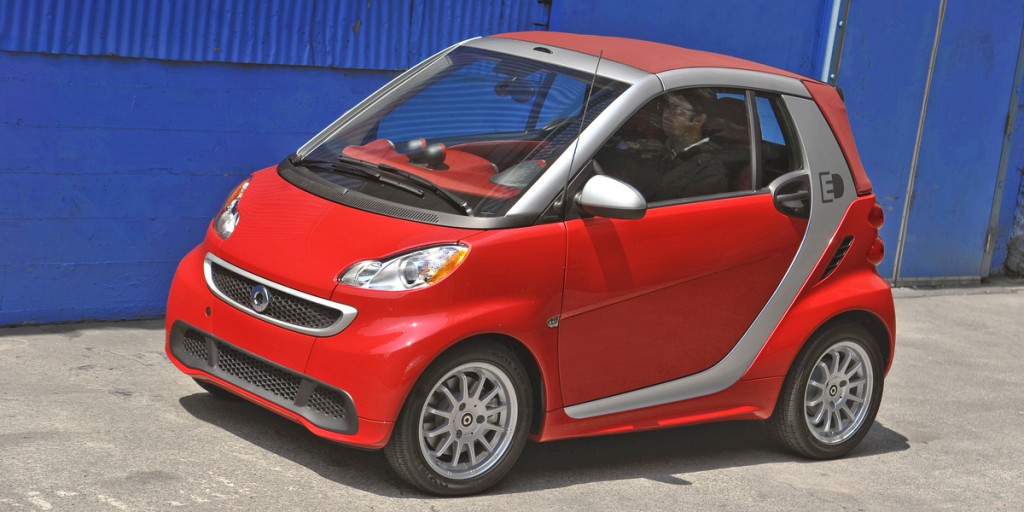 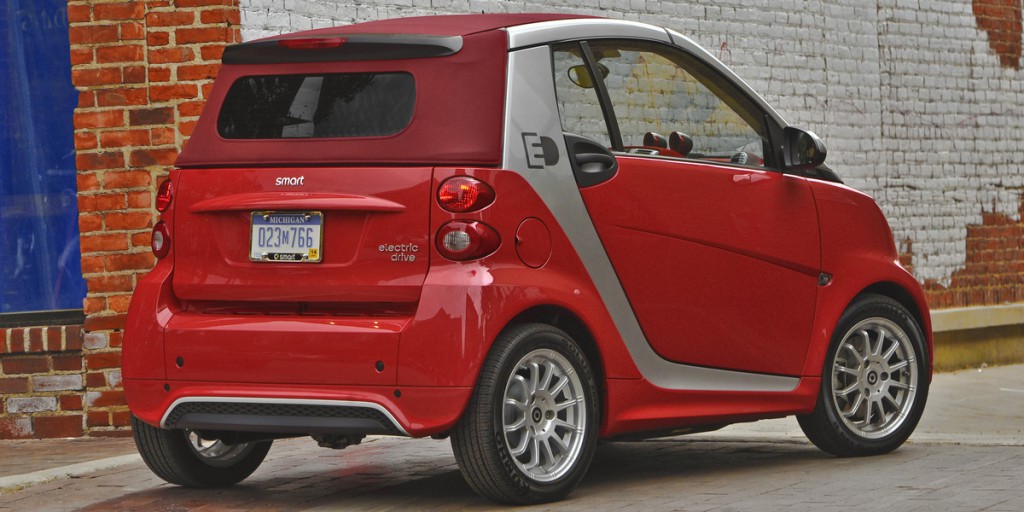 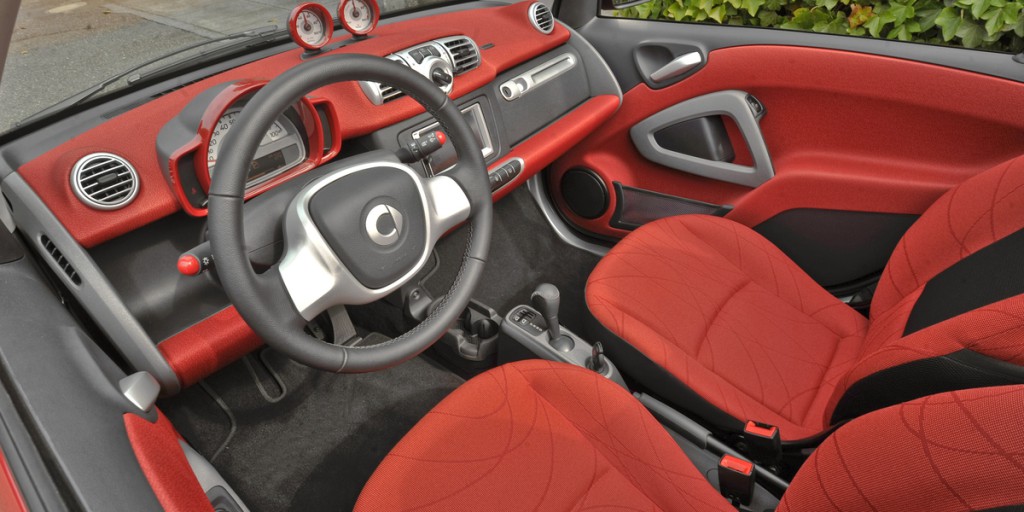 As ever, the ForTwo is an exercise in Euro-centric minimalism, sacrificing the space, refinement, performance, and dynamic ability of conventional minicars for Tinkerbell size and maneuverability. With its unusual styling and Mercedes-Benz connection, it’s really more of a fashion accessory than practical daily transport. Then too, it’s not exactly cheap. We think the electric version makes a better urban runabout than the gas-engine models, but none of them make much sense outside the city limits.

Colloquially known as the “Smart car,” the two-seat ForTwo (get it?) was the smallest four-wheel passenger car on the U.S. market meeting applicable federal standards. In fact, it was so short and narrow that one standard parallel-parking space could accommodate two Smarts side-by-side, nose-to-curb. Even so, the ForTwo had to compete with larger, more-conventional minicars like the Chevrolet Spark, Ford Fiesta, and Scion iQ. Built in France by a division of Mercedes-Benz parent Daimler AG, the ForTwo departed from typical small-car practice by having a rear-mounted powertrain. It was offered as a coupe and as a Cabriolet semi-convertible with a power-operated soft top that rolled back along channels in the roof siderails.

But the big news was first-time retail availability of an all-electric Smart. The ForTwo was designed for battery power, and an Electric Drive (ED) version had been built since 2007, but only for lease on a limited basis, mainly for testing purposes. Starting in 2013 Smart offered a third-generation plug-in electric as a regular showroom model with deliveries beginning in spring 2013. The Electric Drive (ED) models were available in the coupe and convertible body styles, each in a single trim level. Conventional gas-powered Smart models are covered in a separate report.

The updated 2013 Electric Drive models used an electric motor that sent 96 pound-feet of torque and an estimated 74 horsepower through a single-speed transmission. The motor was powered by a 17.6 kWh lithium-ion battery pack situated beneath the cabin floor. All models were rear-wheel drive.

Smart said the Electric Drive’s battery pack needed about 14 hours for a full recharge from a 110-volt plug and about 6 hours from a 240-volt outlet. The battery could also be partially recharged while driving via a regenerative-braking feature. Claimed maximum driving range was about 83 miles.

Every Smart ForTwo Electric Drive had “active safety” features such as ABS, stability system, and traction control. Coupes came with side and window-curtain airbags; convertibles substituted head/torso-protecting airbags. Twin knee airbags were standard for all.

The updated 2013-14 Smart ForTwo Electric Drive models use an electric motor that sends 96 pound-feet of torque and an estimated 74 horsepower through a single-speed transmission. The motor is powered by a 17.6 kWh lithium-ion battery pack situated beneath the cabin floor. All models are rear-wheel drive.

The ForTwo was designed mainly as a low-speed urban runabout. Electric Drive versions weigh about 300 pounds more than the gas-engine models. Nevertheless, they are reasonably snappy from a stop and at around-town speeds, though acceleration tapers off at highway speeds. What’s more, their top speed is limited to 84 mph (to conserve battery charge).

No opportunity to measure Electric Drive’s range. Smart says the latest Electric Drive has a maximum range of some 80 miles, which is no better than that of the larger Nissan Leaf EV. Note, too, that while Smart claims a full recharge of about 6 hours from a 220-volt plug, juicing up from a normal 110-volt outlet takes much longer.

As a relatively light car with a short wheelbase, the ForTwo bounces over all but glass-smooth roads. Electric versions have a slightly smoother ride than conventional models though, doubtless due to their extra weight. Cabriolets exhibit an impressively stiff structure, with little body shake over bumps.

The ForTwo is a champ in the dense urban jungle, threading through traffic like a go-kart and fitting into parking spaces where larger cars can’t. Electric versions are just as nimble. Light, accurate steering contributes to an almost sporty demeanor. Unfortunately, the car feels tippy at even modest cornering speeds, and it’s a real handful in gusty crosswinds on the highway, even though the rear wheels are spread further apart than the fronts to enhance stability. In short, the ForTwo behaves exactly as you’d expect of a four-wheeled “phone booth.”

As a tall box with modest sound insulation, the ForTwo is hardly serene. Wind rush is marked at highway speeds, and tire thrum is ever-present, if only because the wheels are so close to occupant ears. In conventional models the gas-powered engine is just behind the cabin, so Electric versions seem almost restful by comparison, despite moderate motor whine under acceleration. Convertibles allow top-down conversation at highway speeds, at least for those with healthy lungs.

Driver information is limited to just a speedometer, fuel gauge, and assorted warning lights, though Smart offers an optional tachometer and clock, mounted in free-standing pods. Switchgear is basic too, but user-friendly. The convertible’s power soft top can be rolled back to any position at any speed, a neat convenience. However, its side roof bars must be removed for the full open-air experience, which isn’t so convenient.

Cabin decor is what the British term “cheap and cheerful.” It makes a good first impression, with tidy detail assembly, robust-feeling switchgear, and attractive upholstery, whether cloth or leather. But a closer look reveals lots of hard plastic and very few padded surfaces that suggest the vehicle is “built down to a price.”

Despite high-set seats that help occupants feel less vulnerable to surrounding traffic, the ForTwo offers surprisingly good headroom, legroom, and seat comfort, even for those well over 6-feet tall. The cabin is unusually narrow, though, so adults must ride virtually shoulder-to-shoulder. All-around visibility is great, though completely rolling back the convertible top creates a “stack” that blocks the lower half of what you’d normally see out the rear window. Entry/exit is a snap, thanks to the tall body and wide doors, but some drivers will be bemoan the lack of an adjustable steering wheel.

The Smart ForTwo Electric Drive does not have rear seating.

The ForTwo’s city-focused design leaves little room for cargo. Coupes have a lift-up back window above a drop-down tailgate, but can barely fit six grocery bags. Smart claims 7.8 cubic feet of space without blocking the side windows, and 12 cubic feet when packed to the gunwales. A tiny glovebox is barely large enough for the owner’s manual, though assorted cubbies offer some small-item refuge.