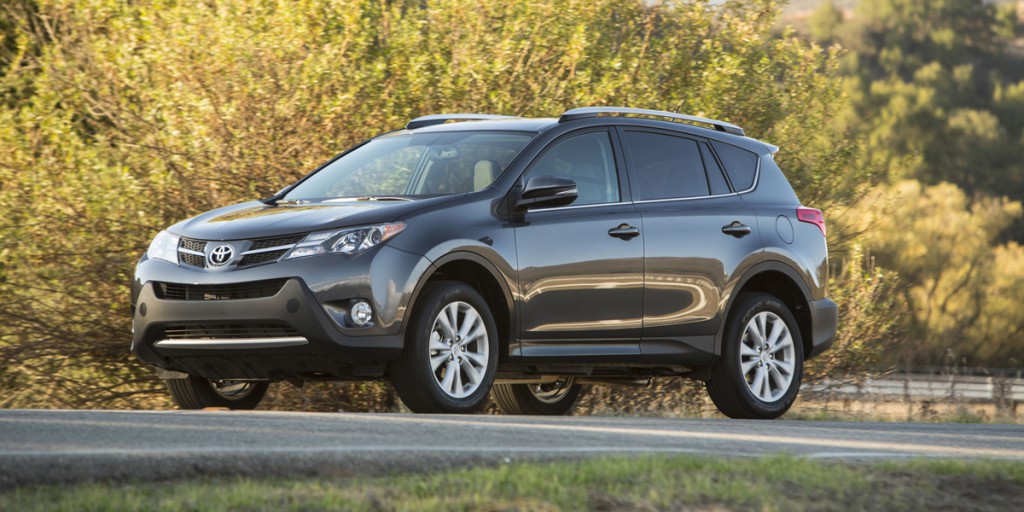 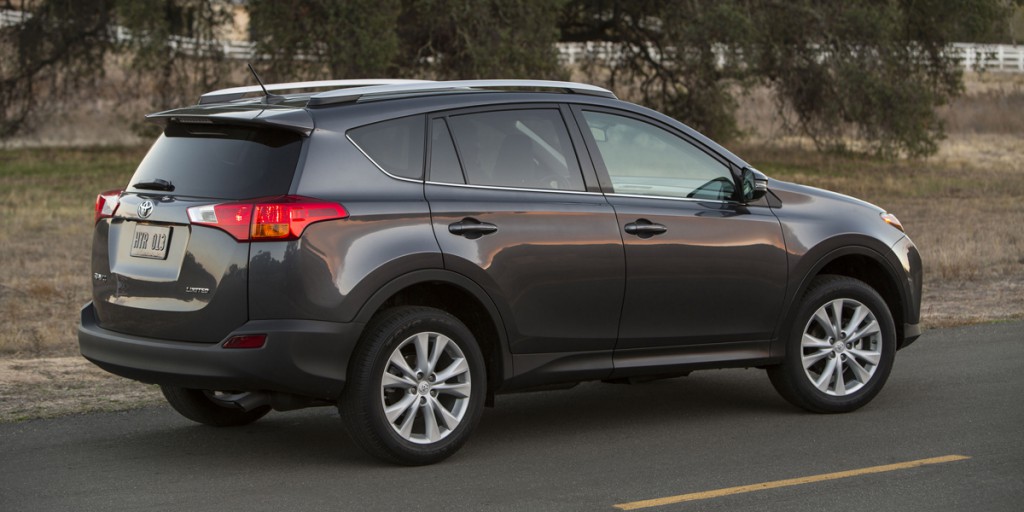 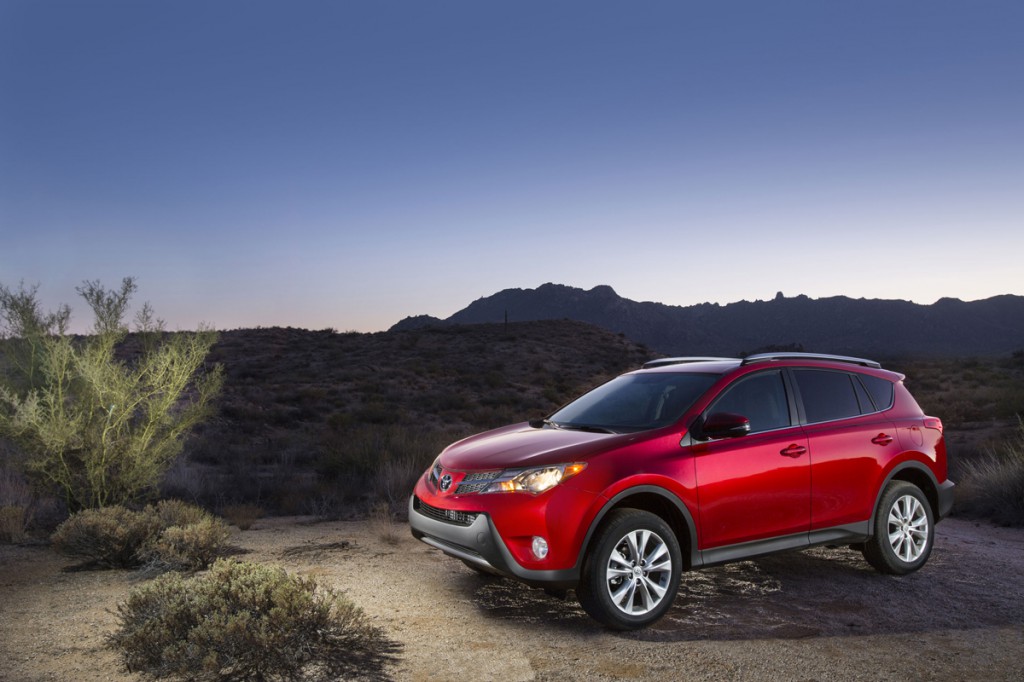 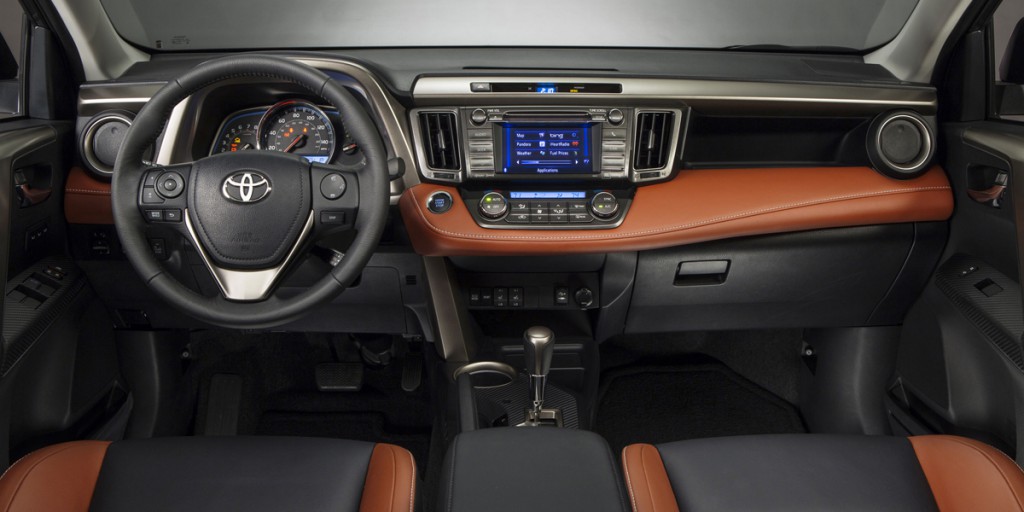 The RAV4 loses the V6 engine and 3rd-row seat that made it stand out in this class, and aside from larger dimensions that allow for great passenger and cargo room, nothing gained in its 2013 redesign really sets it apart from its rivals. Instead, its greatest strength lies in that it has few weaknesses. Starting prices when new seemed a bit steep, but they’re somewhat justified not only by the above-mentioned attributes, but by high levels of equipment and Toyota’s strong brand reputation. Particularly if you’re torn between a compact SUV and a midsize one, RAV4 is well worth a look.

RAV4 was completely redesigned for 2013, with fresh styling, more features, the promise of better fuel economy, and a more conventional approach. Gone were the previous side-hinged rear cargo doors and externally mounted spare tire (replaced by a regular liftgate and under-floor location for the spare), along with the optional 3rd-row seat and available V6 engine. Size increased a bit, and only one powertrain was offered: a 2.5-liter 4-cylinder engine mated to a 6-speed automatic transmission.

Both front- and all-wheel-drive models came only with a 176-horsepower 2.5-liter 4-cylinder engine and 6-speed automatic transmission. Most models included Normal, Eco, and Sport modes. Eco mode adjusted shift points and throttle response for more efficient driving. Sport mode quickened throttle response, held gears longer, kept the transmission in a lower gear for a given road speed, and added some weighty “feel” to the steering.

The EPA rating for front-drive models was 24 city/31 highway. For all-wheel-drive models, it dropped to 22/29. The RAV4 used regular-grade gas.

Note that the limited-production all-electric RAV4 EV that was introduced for 2012 continued to be available in the 2013 and 2014 model years, but the EV model did not receive the new design used by all other RAV4 variants. Consumer Guide’s 2012-2014 RAV EV review can be found in the 2006-2012 Toyota RAV4 review.

Conventional front- and all-wheel-drive RAV4s come with a 176-horsepower 2.5-liter 4-cylinder engine that mates to a 6-speed automatic transmission. A Hybrid was introduced for 2016 that combined the 2.5-liter 4-cylinder with an electric motor for a total of 194 hp. Hybrids had a CVT automatic transmission and were only offered with all-wheel drive. The limited-production front-drive RAV4 EV carried a 154-hp electric motor that mated to a single-speed transmission.

Whether with front-wheel drive or all-wheel drive, a full-throttle start doesn’t prompt the RAV4 to leap off the line, but acceleration is adequate and picks up after about 50 feet. Overall, it’s about par for the class. The transmission downshifts fairly quickly for more passing power. Sport mode holds gears longer under acceleration and sets the transmission one gear lower at most speeds, both of which improve throttle response.

The 2013 models the EPA-estimated fuel economy was 24 mpg city and 31 mpg highway for front-drive models. All-wheel-drive RAV4s were estimated at 22/29. RAV4 uses regular-grade gas. In Consumer Guide testing, an all-wheel drive RAV4 averaged 22.9 mpg in a 50% city, 50% highway driving. The Hybrid’s (introduced for 2016) EPA-estimated fuel-economy numbers were 34 city and 30 highway. In our testing we average 31.0 mpg in a 40 city, 60% highway mix of driving.

The ride quality is good for a compact SUV–or at least average for the class–on LE and XLE models. Oddly, the “luxury” Limited rode more stiffly, probably due to its 18-inch tires vs. the standard 17s. The sporty SE model adds stiffer suspension that makes the ride more jittery on smooth pavement and potholes more noticeable.

There’s nothing really sporty about the RAV4’s driving dynamics, but body lean in fast turns is reasonably well controlled. Steering feel varies from fairly light in Normal mode to heftier in Sport mode.

Only moderate wind and road noise are generated at highway speeds, and even under full throttle, engine noise is not annoying.

Gauges can be clearly read, and both the audio and climate controls are mounted high and within easy reach. The climate controls on LE models consist of three rotary knobs that make adjustments simple. However, the automatic climate controls on XLE and Limited transfer mode and fan speed to repetitive-step pushbuttons, which are tedious to adjust. The standard dashboard screen turns most audio controls into “virtual” pushbuttons, but they’re relatively easy to use.

Hard plastic is the rule in LE models, and though XLE and Limited add a padded dash beltline, material quality is just so-so for the class. However, two-toning and some bright trim help aid the overall look, and higher-line models offer nicer trim and some expressive color combinations that can really make the interior pop.

Plenty of room for adults in the front seats. Visibility is quite good, aided by rear headrests that can be flipped down. Still, the rear corners are a bit obscured by thick roof pillars, though the standard rearview camera helps.

The rear seat has good headroom and legroom for adults. All models have a reclining seat back with center armrest.

The cargo area is wide at the back (though a speaker intrudes on Limiteds with the JBL sound system), and there’s a good amount of space even with the rear seat backs up. When folded, the split seat backs rest flat and level with the cargo floor for terrific storage room, aided by a small under-floor bin. The Limited adds a power liftgate. Interior storage consists of a small glove box, decent-size console box, a mid-dash tray, two cupholders, two small console bins, and map pockets.