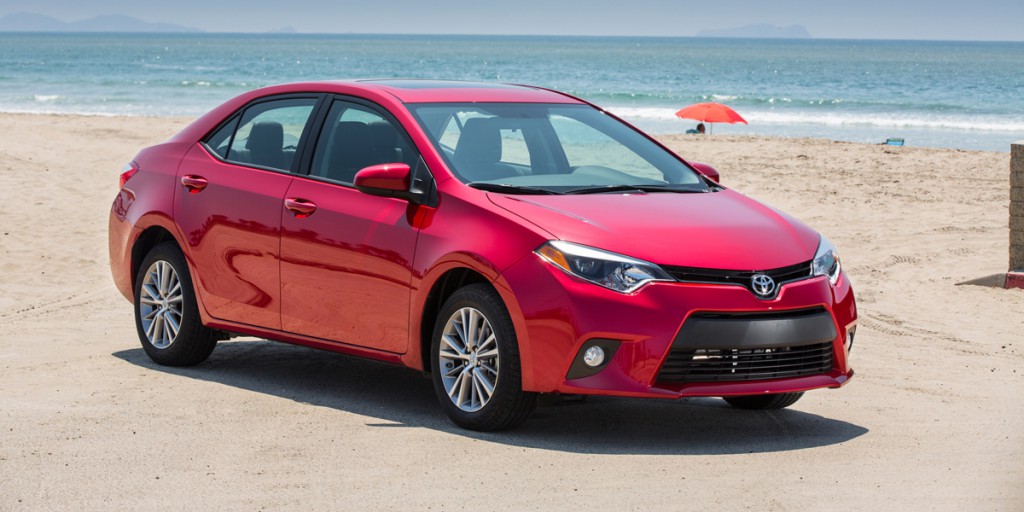 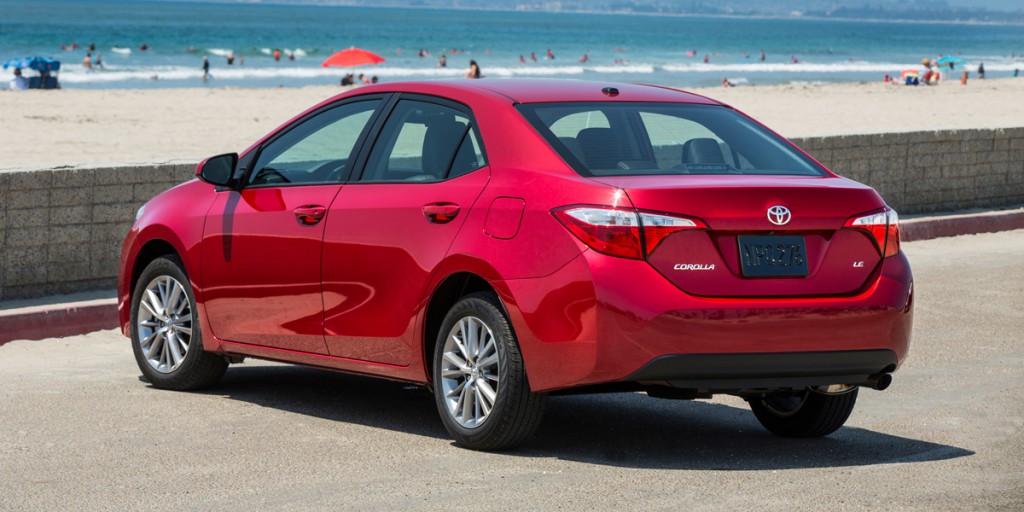 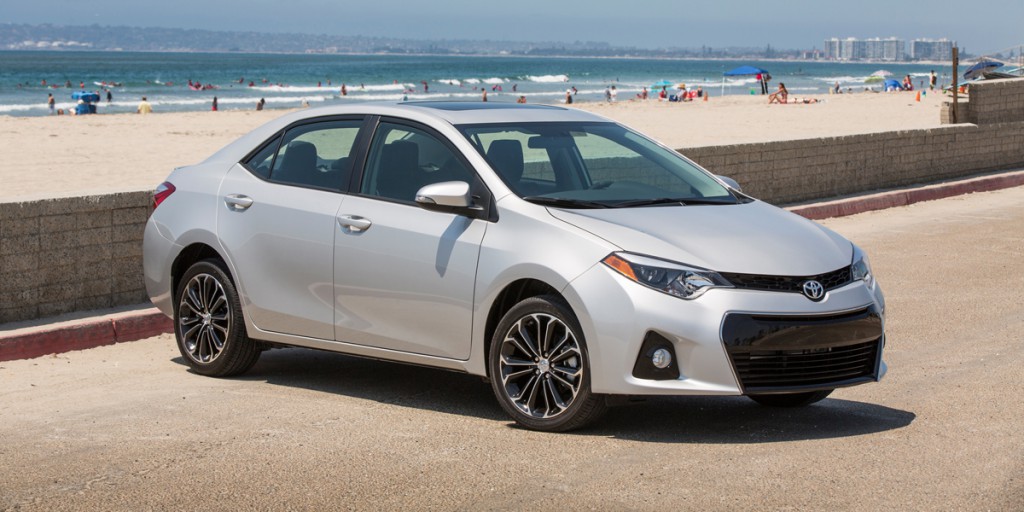 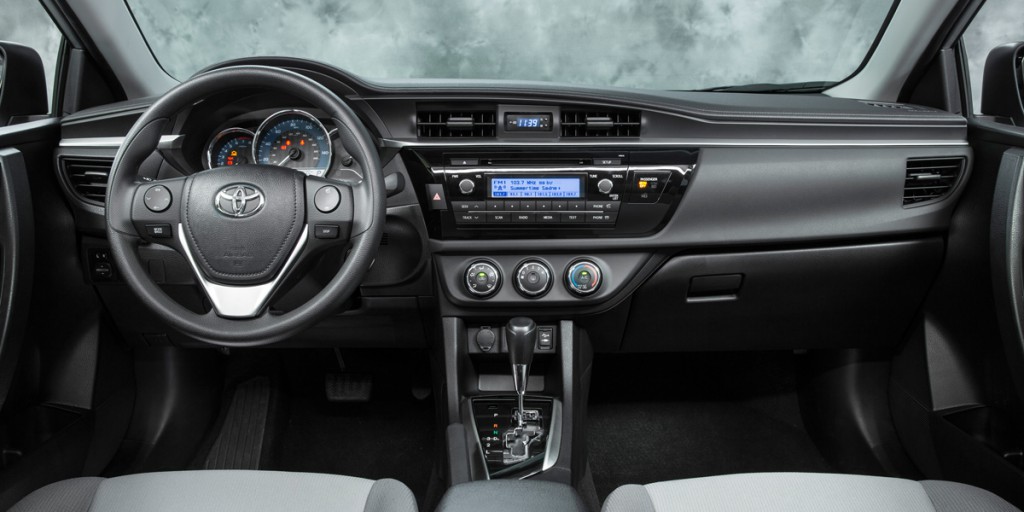 Corolla retains a conservative, practical character that appeals to a broad range of compact-car shoppers who just wanted reliable transportation. There were plenty of compact cars that are more engaging and enjoyable to drive, and several that have more-upscale trimmings, but this mainstream Toyota’s unassuming personality and reputation for reliability still attracts many buyers.

Toyota’s compact car was redesigned for 2014. The Corolla rode a chassis that was 3.9 inches longer in wheelbase and 2.5 inches longer overall, and it gained expected new infotainment features such as a touchscreen audio system that was available with Toyota’s Entune app suite. LED headlights, a feature that’s typically found on luxury cars and SUVs, were standard on all models. All Corolla models used a 1.8-liter 4-cylinder engine. Output was 132 horsepower in the L, LE, and S and 140 in the LE Eco. A 6-speed manual transmission was standard on the L and S. A 4-speed automatic was optional on the L. Optional on the S and standard on the LE and LE Eco was a continuously variable transmission (CVT) that behaved like an automatic. The CVT in the LE Eco had an “ECO” mode that softened throttle response in order to improve fuel economy. S models with the CVT offered a “Sport” setting and made the throttle more sensitive to benefit off-the-line acceleration.

The new styling was a bit more dynamic inside and out compared to the previous generation, though that’s not saying much. The Corolla’s primary rivals included the Chevrolet Cruze, Dodge Dart, Ford Focus, Honda Civic Sedan, Hyundai Elantra, Kia Forte, Mazda 3, and Nissan Sentra.

The Toyota Corolla included the usual roundup of safety equipment expected by shoppers and mandated by the government.

The 132-horsepower 1.8-liter 4-cylinder engine that powered CG’s mid-level LE Plus test car was not new, but the automaticlike continuously variable transmission (CVT) is and it worked quite well. Unlike most CVTs, Toyota’s uses an internal 2-speed gearbox that backs the CVT part, giving it essentially a Low and High range. The benefit is not only a wider ratio spread, but also instant kickdown response, as the transmission simply drops from High range down to Low when you stab the throttle. This was one of my favorite features of the Corolla. On the down side, the combination didn’t provide a very lively takeoff from a stop.

In Consumer Guide testing, a Corolla LE Plus with CVT averaged 26.6 mpg over 349 miles with a mix of 60% city and 40% highway driving.

Ride is about average when the streets are as well, but cracks and bumps can pack a punch that the front-strut/rear-torsion-beam suspension doesn’t take so well.

Handling was characterized by light steering and modest body lean in turns. Not cushy luxury, not flingably sporty, just … eh.

Anything but leisurely acceleration was accompanied by a loud, buzzy—and steady—moan from the engine. Not something that gives the impression of “quality.” Speaking of noise, that generated by road and wind on the highway has drawn some criticism, but I didn’t notice it being overtly obnoxious.

Controls are legible and generally easy to use. The climate system uses a rotating knob to dial in temperature, however fan speed and mode were controlled by tedious, repetitive-step pushbuttons. The radio was simple to program through the 6.1-inch touchscreen.

Toyota has created a nice interior environment for the Corolla. Many surfaces in the test car were soft to the touch or even padded a little, and there was some tonal variety on the door panels and cloth seats.

Front seats had a nice bit of bolstering for grip, but could do with a bit more lower-back support. This sub-6-foot driver had all the leg room and head room he wanted behind the wheel. Visibility is a mixed bag. On the positive side, thin roof pillars give a far better all-around view than in most vehicles, something I really appreciate. Nearly all cars these days have a high trunk, which makes backing a trick, and while Corolla commendably comes standard with a wide-angle rearview camera, it didn’t work as well as most. Furthermore, the sun visors didn’t extend and didn’t come close to covering the side windows, which seems just a bit cut-rate.

Rear seats will accommodate three familiar adults, helped out by an extremely minimal central tunnel. Leg and head room are good—in fact, stretch-out room in back is surprising.

The squarish trunk is ample for a small car, though the load floor narrows between body structures ahead of the wheel houses. Liftover is pretty low for easy loading. Rear seats fold for added capacity, but they don’t fold flat and sit a few inches higher than the trunk floor.