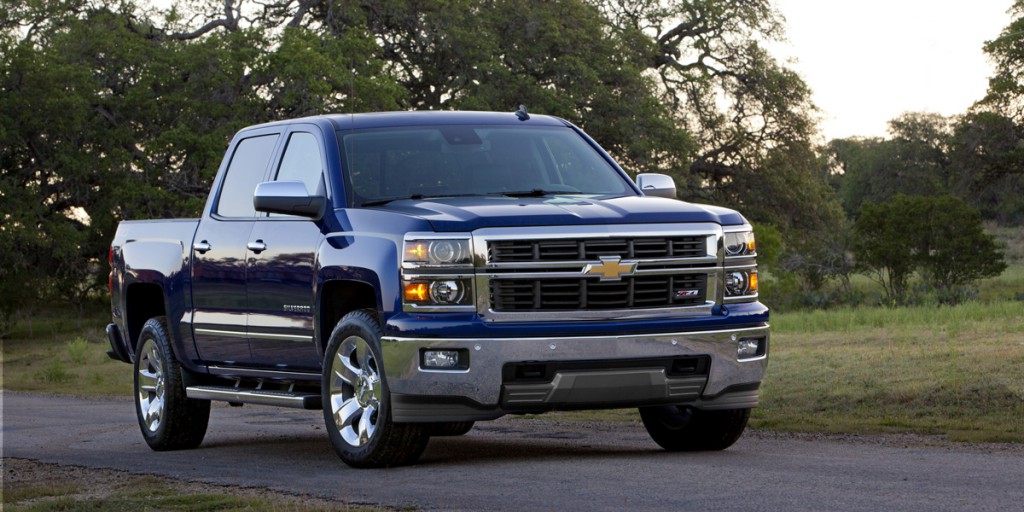 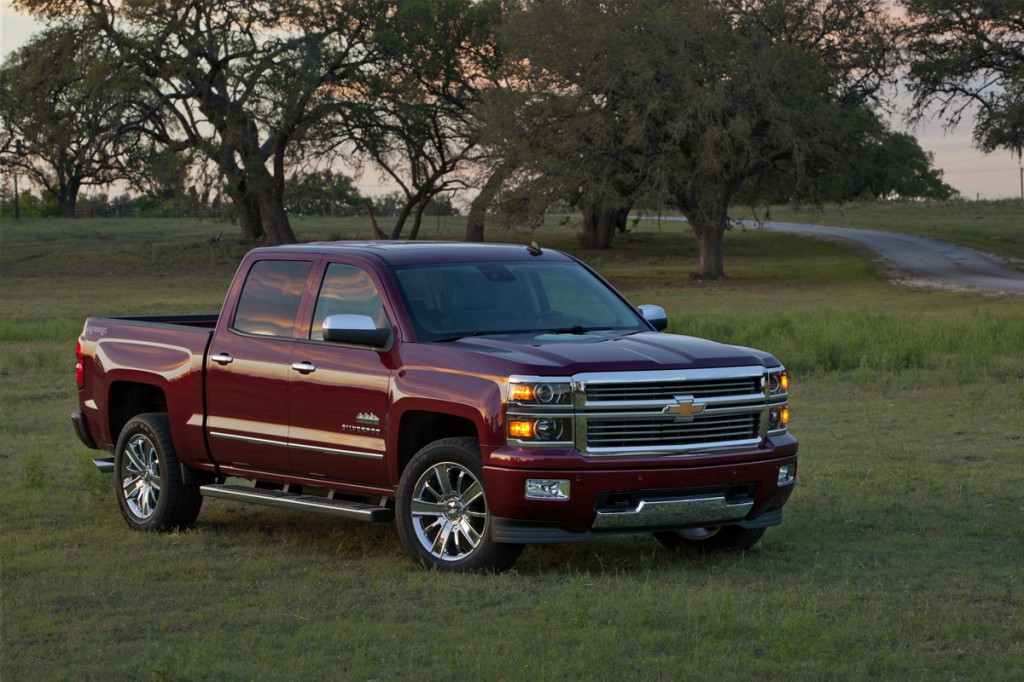 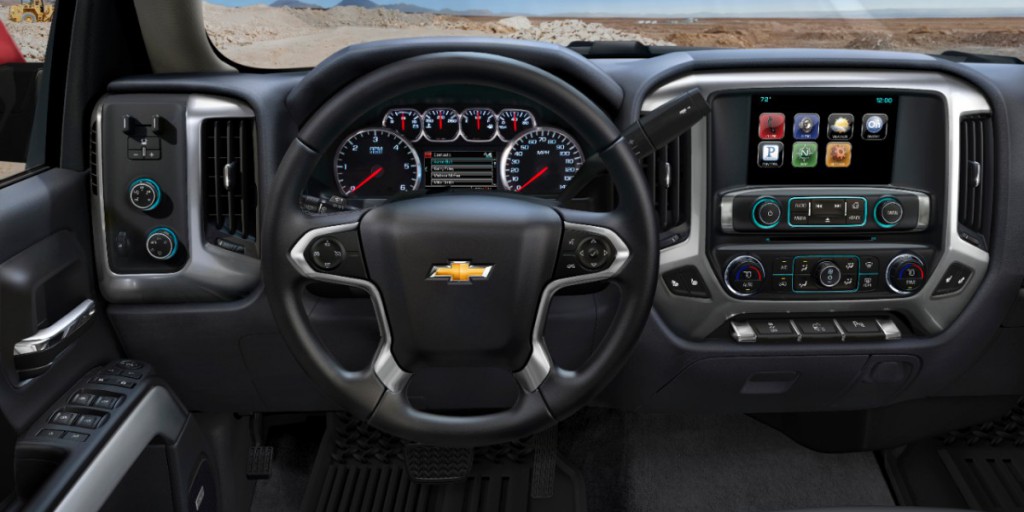 Overall, the 2014 Chevrolet Silverado represents an improvement to an already very good large pickup. It’s more refined inside and out while never forgetting what it’s designed to do. Could GM have done a bit more with this redesign? Sure, but there are still plenty of great things about it to where current Silverado owners and drivers of rival trucks should give this redone rig a long, hard look.

Chevrolet introduced an all-new redesigned Silverado full-size pickup truck for the 2014 model year. It shared most of its basic design with its corporate cousin the GMC Sierra 1500.

Like most big pickups, the 2014 Silverado was available with three different cab styles. Regular cabs were 2-door models without a back seat. Chevy had renamed its extended-cab model the double cab. The big news here was that it included four front-hinged doors. Previous extended cabs had rear-hinged doors that couldn’t be opened independently of the fronts. The last style, and the one the company expected to be most popular, was the crew cab. It also had four conventional doors, but it was longer than the double cab and had greater interior room. Both 4-door models included rear seats.

Three bed lengths were be offered. Regular-cab Silverados were fitted with a 6-foot 6-inch or 8-foot box. Double cabs came with the 6-foot 6-inch bed. That bed could also be had with the crew cab, along with a shorter box that was 5-feet 8-inches long.

This review covers the conventional, half-ton Silverado 1500. Most Silverados were built in the United States, but some production took place at a General Motors plant in Mexico. Competitors included the Ford F-150, Ram 1500, Toyota Tundra, and to a lesser extent, the Nissan Titan.

The 2014 Chevy Silverado was offered in WT (Work Truck), LT, and LTZ models, along with a new top-of-the-line trim level called High Country. The WT models were subdivided into 1WT and 2WT variants.

Most models included a rear bumper with steps built into the corners and hand holds formed into the box rail protectors. Other available features included LED lighting mounted under the bed rails, upper tie-down hooks, and and easy to open and close tailgate. All included a trailer sway control system and hill start assist.

Next were the LT models. Additional interior equipment included carpeting, under-seat storage, and a leather-wrapped steering wheel with radio and cruise control buttons. Outside there were aluminum wheels, an easy to open and close tailgate, and rear wheel well liners.

The new top-of-the-line model was the High Country. The interior had unique leather trim, heated-and-cooled front bucket seats, and a Bose-branded audio system with MyLink connectivity and an 8-inch touch screen.

There were three engines available on Silverado 1500s: a 4.3-liter V6, 5.3-liter V8, and 6.2-liter V8. The displacements were familiar and each maintained an overhead-valve layout, but the company said these were all-new designs. Each used an aluminum block and cylinder heads, direct fuel injection, and continuously variable valve timing. There was also a standard cylinder deactivation system that allowed each engine to operate as a 4-cylinder under certain driving conditions to conserve fuel. All three engines were mated to a 6-speed automatic transmission.

Silverados were offered in rear-wheel- and four-wheel-drive forms. Maximum towing capacity was 11,600 pounds.

1. 5.3-liter was available with eAssist mild hybrid system on LT and LTZ models nationwide for 2018. Previously, eAssist was only offered on LT models in California.

The 4.3-liter V6 and 5.3-liter V8 engines are very refined. On each, the standard cylinder deactivation feature is impressively smooth in operation and changes in mode are imperceptible. The V6 offers good acceleration from a stop and easily gets an unladen truck up to highway speed. The 5.3 V8 provides more robust power all around and would be our pick for the majority of buyers. With either engine, the 6-speed automatic transmission operates smoothly. No opportunity yet to evaluate the 6.2-liter V8.

Despite the additional horsepower, the truck’s EPA-estimated fuel economy goes up: to 16 mpg city/23 mpg highway for a 5.3-liter with rear-drive test example. A 200-mile test drive consisted of about 60 percent highway miles, where the truck returned a shade less than 19 mpg. Chevy recommends regular-grade gas for all Silverados. All three engines can also use E85 ethanol-blended fuel.

Silverados ride reasonably well for a big pickup. When the bed is empty the rear of the truck jiggles up and down subtly on most road surfaces, but the ride smooths out with some weight in the back. Trucks with the available Z71 off-road suspension ride similarly.

Though Silverados are large trucks, even crew-cab models aren’t ponderous. The steering is nicely weighted and accurate, although some testers thought it too light. Body lean is controlled reasonably well, but some noseplow is evident in quick turns. The brakes provide strong stopping power, and the firm pedal is easy to modulate.

Silverados are impressively quiet inside. The 4.3 and 5.3 engines are heard under acceleration, but are nearly silent otherwise. There’s a hint of wind and tire noise on the highway, but it’s serene enough inside that you might forget you are in a pickup truck.

The large speedometer and tachometer are clearly marked and easy to read, as are the four small gauges lined up above them. Most models include a 4.2-inch color display in the center of the instrument cluster. A controller on the steering wheel is used to scroll through its various information screens. Large, clearly marked buttons and knobs govern the climate control system, most basic audio system functions, and other secondary items. There are duplicate audio controls on the back side of the steering wheel too. The available 8-inch touchscreen MyLink system has large easy-to-read icons and sharp graphics, but it will take some acclimation for users to make the most of what the system offers. The latest version of Chevy’s MyLink infotainment is a joy to use, even if some parts of the touchscreen are a bit of a stretch to reach.

Silverado’s standard interior treatment is a noticeable upgrade from the old model’s “Pure Pickup” design. Materials are durable, but there are more padded surfaces. LTZs look a bit snazzier with their standard leather upholstery and contrast-color stitch detailing.

Silverado’s front seating area is spacious. There’s generous legroom and headroom, even with the optional sunroof. The split bench and bucket seats are both comfortable and supportive. Step-in height is moderate, so entry and exit are quite easy for a big pickup.

Crew cabs have large-sedan space in back. Six-footers have ample legroom, even if the front seats are pushed far back. Headroom is generous too. The bench is reasonably comfortable, but the rear head rests have only an inch or two of vertical travel, which could prove to be a comfort problem on longer trips. Again, entry and exit are easy for the class. No opportunity to evaluate a double cab.

The crew cab’s split rear bench seat folds easily against the back wall of the interior by lifting up on the cushion. This creates a large indoor storage area with a nearly flat floor. Interior small-item storage is impressive. There are two glove boxes, multiple storage bins on each door panel, and a handful of smaller cubbies. Trucks with the front bench seat have a wide but shallow storage compartment in the fold-down center arm rest and a small drop-down bin at the bottom of the dash’s center section. With the available bucket seats, there is a large console that mates to the bottom of the dash. It has a large compartment capable of holding hanging folders under the arm rest, two cupholders, and a large open bin at the base of the dash. The steps in the corners of the rear bumper are a welcome addition that makes it easier to climb into the bed.