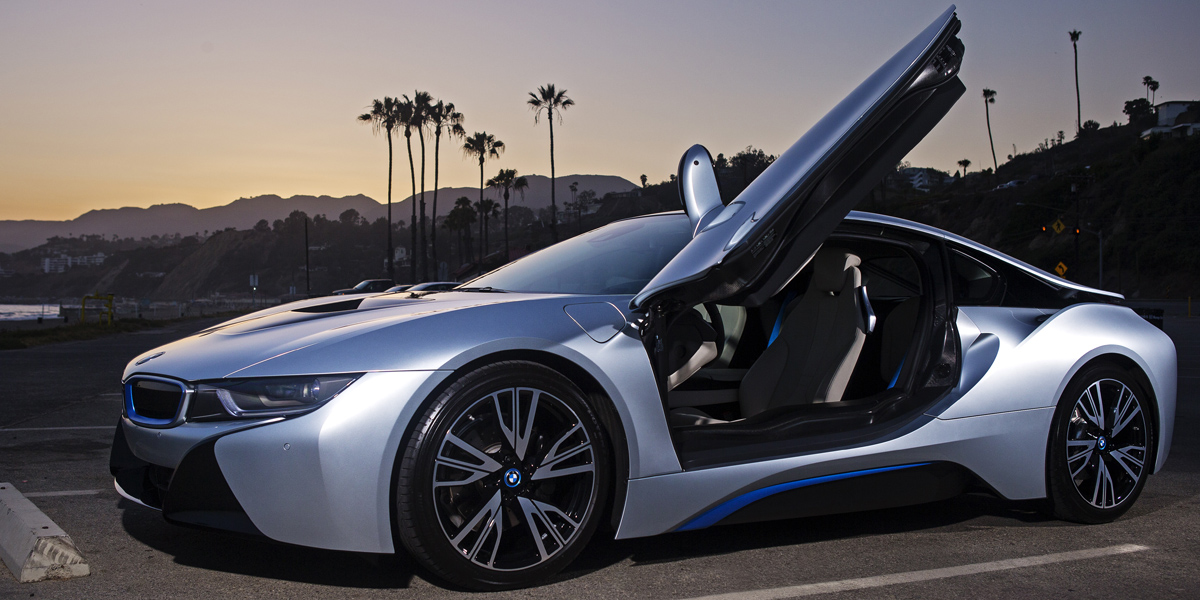 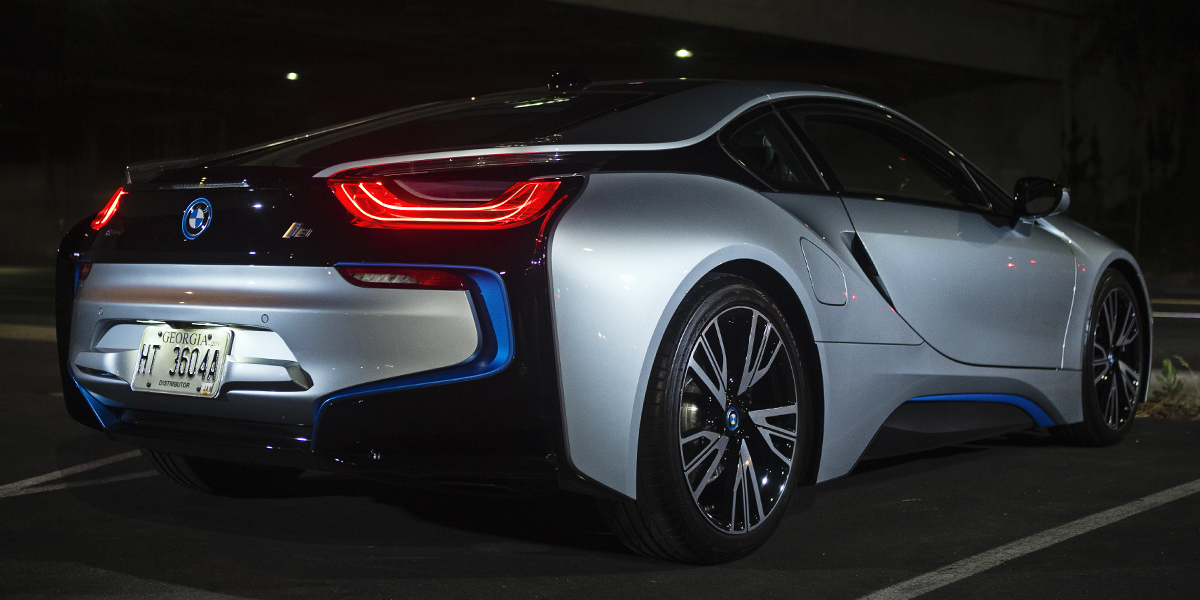 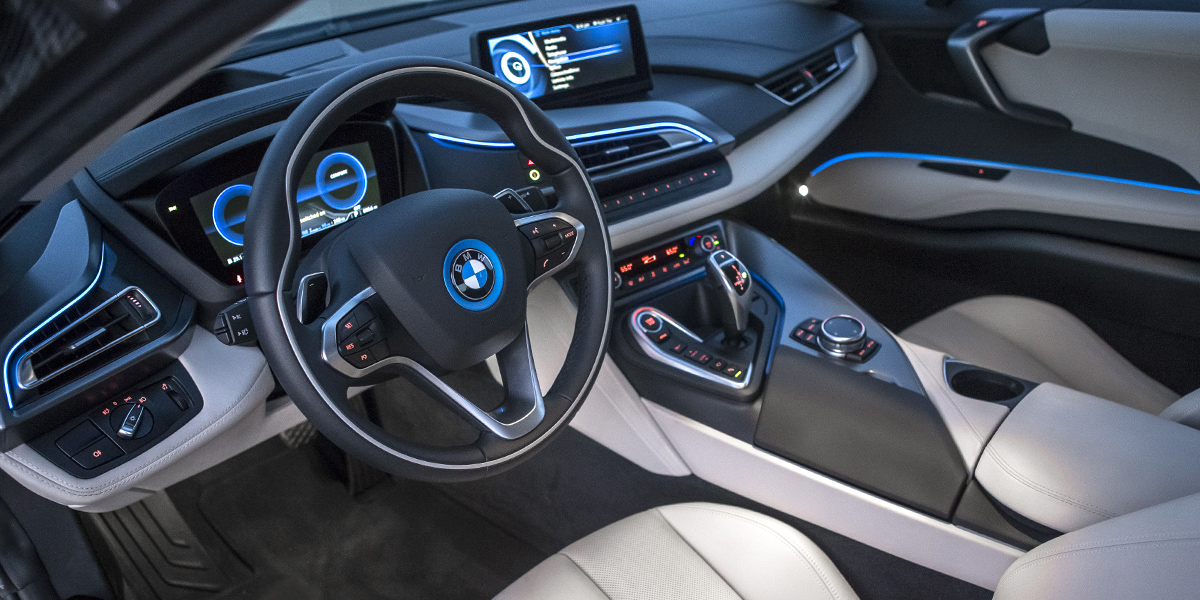 All that makes it a little hard to judge BMW’s i8. If you think of it as a lower-end exotic supercar on the order of an Aston Martin Vantage, Mercedes-Benz AMG GT, or mid-line Porsche 911, it probably wouldn’t fare very well by comparison. But if you think of it as a futuristic sportster with “Green Car” cred and incredible coffee-table charisma, it really has no equal.

Contrary to what its radically scooped bodywork and exotic scissor doors might imply, the i8 is a plug-in hybrid. It’s also all-wheel drive, something in which its “hybridness” plays a principle role. Driving the rear wheels through a 6-speed automatic transmission is a tiny 1.5-liter 3-cylinder turbo that’s been tweaked to deliver a whopping 228 horsepower, making it one of the most “power dense” engines on the market. That engine also drives a motor/generator that can help recharge the on-board 7.1-kWh battery, which in turn powers a 129-hp electric motor that drives the front wheels through a 2-speed automatic. That puts a combined 357 hp to the road.

Driving the rear wheels through a 6-speed automatic transmission is a tiny 1.5-liter 3-cylinder turbo that’s been tweaked to deliver a whopping 228 horsepower, making it one of the most “power dense” engines on the market. That engine also drives a motor/generator that can help recharge the on-board 7.1-kWh battery, which in turn powers a 129-hp electric motor that drives the front wheels through a 2-speed automatic. That puts a combined 357 hp to the road.

BMW says the i8 can do the benchmark 0-60-mph dash in 4.2 seconds. That’s quick by most standards, but not so much by exotic-car standards. Furthermore, it doesn’t always feel that fast, as flooring the throttle from a stop doesn’t produce the slingshot effect you might expect; oh, it moves out just fine, but it doesn’t flatten your eyeballs and leave you gasping for breath. Throttle response while under way is quite quick, but even better if you have it in Sport mode than in Comfort mode.

In Comfort mode and with a fully charged battery, the i8 will go about 15 miles on electric power alone. In Sport mode, however, the gas engine runs almost all the time. My 93 miles were covered in Comfort mode, and in 60-percent highway driving, I averaged a commendable 38.5 mpg. Among all Consumer Guide drivers, average fuel economy was 32.9 mpg over 257 miles with 60% city and 40% highway mix.

Normally, sports cars sacrifice ride for handling, but the i8 rides surprisingly well over smaller bumps. However, the ride is firm.

Handling is excellent, with highly responsive steering and flat cornering. Granted, the steering doesn’t have quite the “feel” of most sports cars.

As is the case with many high-end cars these days, the “instrument panel” consists of a screen hosting virtual gauges. It may be the techy trend, but traditionalists may find it too Xbox-y. The i8 also has a head-up display. The infotainment system is BMW’s now-usual iDrive configuration that relies primarily on a center control knob, dashboard screen, and eight programmable buttons. Getting to a screen you want can be infuriating, but once your favorites are programmed into the buttons, it’s less so.

The interior is coolly sophisticated, with ample use of leather, contrast stitching, and dramatic shapes. Virtually every surface is padded, and a futuristic theme dominates with aluminum-look trim and blue lighting at night.

Entry and exit require acrobatics, complicated by scissors-style doors that open up and out. Once inside, there’s just OK headroom and legroom for the front seats. Visibility isn’t good to the front corners due to close, thick pillars, but it’s absolutely abysmal to the rear corners; aiding when backing is a rearview camera that projects a bright, clear picture in the dark. Over-the-shoulder visibility is fine, primarily because there’s no side pillar at all, but when flipped to the side, the sunvisor doesn’t extend to cover more than half the window.

There’s a rear seat, but it’s a joke that makes nobody laugh. Maybe a specific-sized kid could fit, but even putting shopping bags in back is hindered by the front shoulder belt that bisects the opening and can’t be easily moved.

Interior storage is skimpy at best. The small glovebox is almost entirely taken up by the owners manual, and the rest consists of a tiny forward console bin, a single cupholder (though there are two others behind the driver’s elbow for the rear-seat passengers who will never be there), a shallow covered tray with Aux and USB jacks, and an even shallower center-console bin with 12-volt jack. There are no map pockets in the doors, as their contents would fall out every time you opened them. The trunk has some space above and behind the engine cover, but it’s best used by soft luggage — and not much of it.