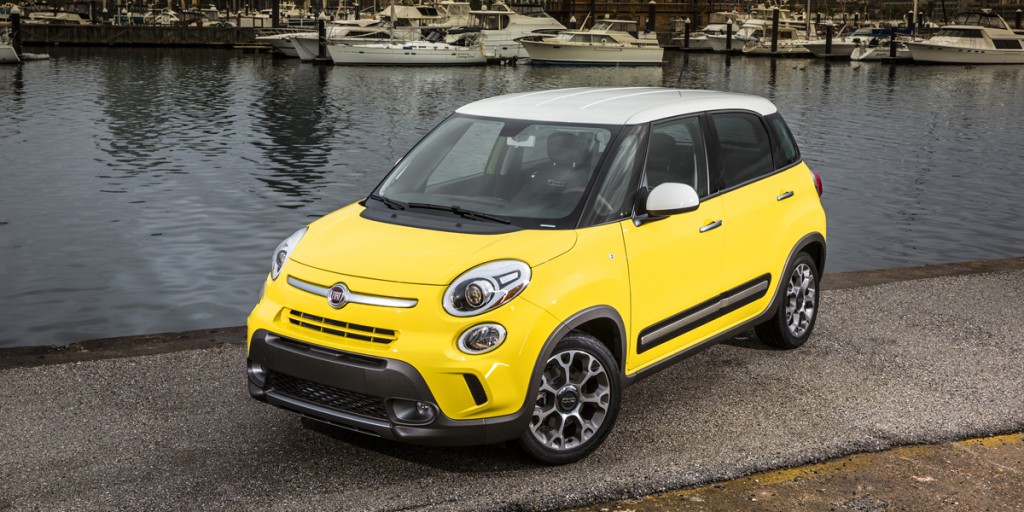 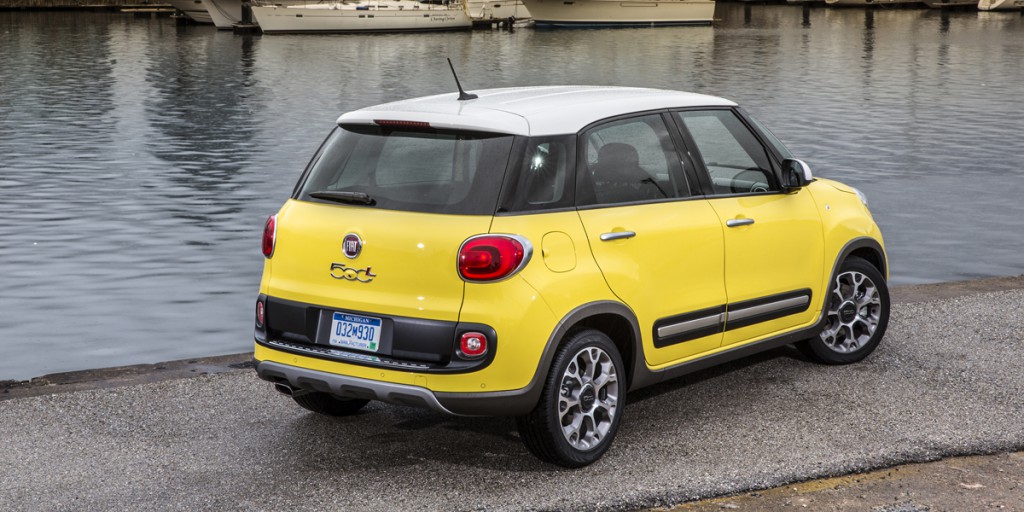 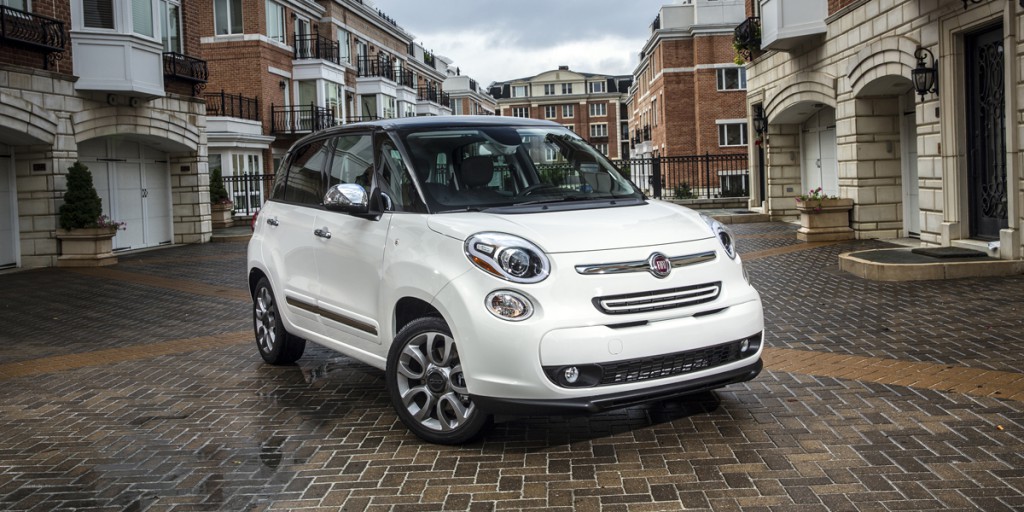 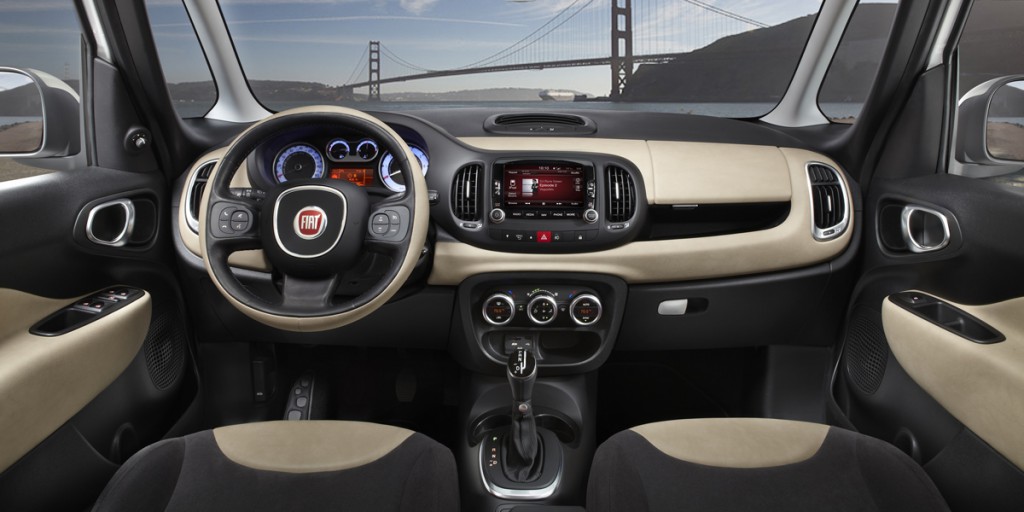 The 500L is a natural and needed extension of Fiat’s product portfolio. Though larger and more practical than its 2-door stablemate, the 500L retains the smaller car’s unique European styling and much of its fun-to-drive character. Visibility is excellent, and the interior’s more conventional control layout will appeal to a broader range of potential customers. Drivetrain smoothness and some odd choices for cargo carrying are issues we’d like to see addressed. Still, the Fiat 500L offers shoppers a lot of convenience features at an aggressive price. A wide range of custom/personalization accessories will go some way toward allowing buyers to make a 500L uniquely their own.

Fiat (the corporate parent of Chrysler) expanded in size and scope in the U.S. with the addition of the 500L. Aside from an engine and a few styling cues, this compact, front-wheel-drive, 4-door wagon had nothing in common with its smaller, 2-door coupe and convertible siblings. The 500L was built in Serbia.

The boxy 500L competed against other square-shaped compact and subcompact cars. The Fiat was roughly the same size, at least on the outside, as the Scion xB. Other rivals included the Kia Soul and base versions of the Mini Cooper Countryman. We classified the Mini as a compact SUV because it was available with all-wheel drive (something the 500L lacked), but it and the Fiat were otherwise very similar in size and style.

The Fiat 500L adopted a model-name strategy that largely mirrored its 2-door cousin. The range extended from the base Pop through the volume Easy, outdoor-themed Trekking, and top-line Lounge.

All Fiat 500L models were powered by a 160-horsepower 1.4-liter turbocharged 4-cylinder engine. If that sounds familiar, it’s the same engine was found in other Chrysler/Fiat vehicles, including the 500 Abarth and Dodge Dart. Transmission choices were a 6-speed manual transmission and a 6-speed dual-clutch automated-manual transmission that behaved like an automatic.

All Fiat 500L models included the usual lineup of safety features. Items such as blind-spot alert and lane-departure warning were not offered.

All Fiat 500L models were powered by a 160-horsepower 1.4-liter turbocharged 4-cylinder engine. If that sounds familiar, it’s the same engine was found in other Chrysler/Fiat vehicles, including the 500 Abarth and Dodge Dart. Transmission choices were a 6-speed manual transmission and a 6-speed dual-clutch automated-manual transmission that behaved like an automatic.

The 500L has adequate power overall. It’s a bit pokey from a standstill, but after about 10-20 feet, the turbocharger kicks in and moves the car forward well enough. As the engine speed rises, though, it runs out of juice fairly fast. Pop models come only with a 6-speed manual transmission. While the clutch is smooth and precise, the shifter is not, making 500L models so equipped difficult to drive on congested city streets. The automated-manual transmission, which is standard on the Lounge, upshifts quickly and smoothly, but it often takes a hard jab of the gas pedal to coax a downshift. We still prefer it to the regular manual transmission, though.

All 500L models get an EPA estimated 33 mpg highway, which is good for a compact SUV but toward the back of the pack among compact cars. Fiat recommends premium-grade gasoline, but the car will run on regular with a slight performance hit. A test 500L with a 6-speed automated-manual transmission averaged 27.8 mpg over 307 miles with a 50/50 mix of city and highway driving.

The 500L handled a variety of smooth and pockmarked roads. with very good composure. The body feels solid, which inspires confidence when the pavement turns rough. Low-speed bumps induced some jitter, which was more apparent on our sunroof-equipped Lounge test car than in the non-sunroof Pop.

Though the 500L doesn’t have the sporty character of its 2-door siblings, it is confident and composed when cornering. Steering feel is progressive and natural, and body lean in fast turns is kept in check. The brake pedal felt a bit spongy on our test examples, which did not inspire confidence when we needed to stop suddenly.

The engine sounds a bit rough when accelerating, and we observed some road noise when traveling at highway speeds. Other than these two issues, the 500L is a pretty quiet little car. Despite its tall, boxy shape, wind noise is not a problem.

The 500L’s dashboard layout is conventional, with the usual separate gauges for speedometer, tachometer, fuel, and engine temperature, all flanking a decently sized trip computer/information display. The climate controls are mounted fairly low and recessed into the central dashboard stack. This is more an issue with the Lounge’s dual-zone automatic setup, as the layout is a bit busier. The Pop’s 5-inch touchscreen audio display seems small, but it’s not fiddly to operate. The larger 6.5-inch unit included with the navigation system is easier to read and use. The 500L’s system is quite agreeable to work with on a daily basis.

Pop models include dashboard trim consisting of plastic inserts painted to match the body color. It’s essentially how Fiat treats the 2-door 500, and it works really well in the 500L. Lounge versions have a softer feeling material in the same spot that we can best describe as “imitation fake suede.” We understand the intent, but it doesn’t come off as feeling particularly high-end. It would be nice if Fiat gave customers the option to stick with the body-color plastic on any 500L. The Pop’s cloth upholstery looks and feels a bit unusual. It’s not cheap by any means, just different than the compact-car norm.

Even beneath the housing of the optional sunroof, front headroom is excellent in the 500L. Decent seat travel makes for good front legroom as well. The car’s tall seating position and expansive windows make for terrific visibility to the front and rear corners. The view straight back is partially obstructed by the rear bench’s immovable outboard headrests.

Rear legroom ranges from teeth grindingly cramped to pretty decent depending on how you’ve positioned the rear bench. It’s nice that Fiat gives you the option to slide the rear seat, but we have a feeling most customers will leave it in its most aft position. The rear seat sits a good 2 inches above the fronts, which makes for a commanding, stadium-style arrangement. Comfort is fine on models without the sunroof, but ordering this option rather severely restricts headroom to the point where even average-size adults will be scraping their noggins on the headliner.

At first blush, the 500L’s cargo area looks like that of your typical compact wagon. It has a removable panel that can be raised slightly, which creates a nearly flat load floor when the rear seat backs are folded. The entire rear seat can also tumble forward to further increase cargo area. When the rear seat is up against the fronts, the cargo hold then lies above the floor. Cabin storage consists of a pair of gloveboxes, large door pockets, and a decently sized center console.