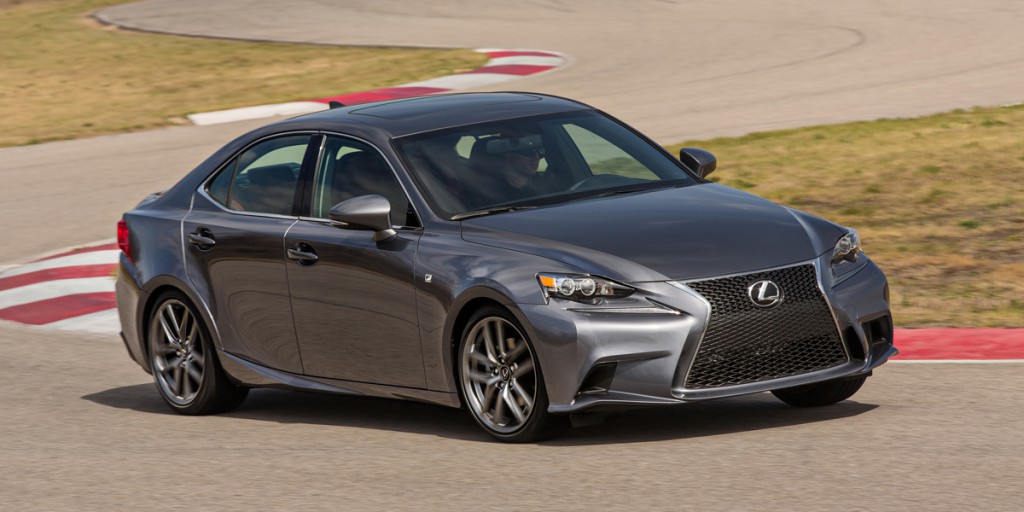 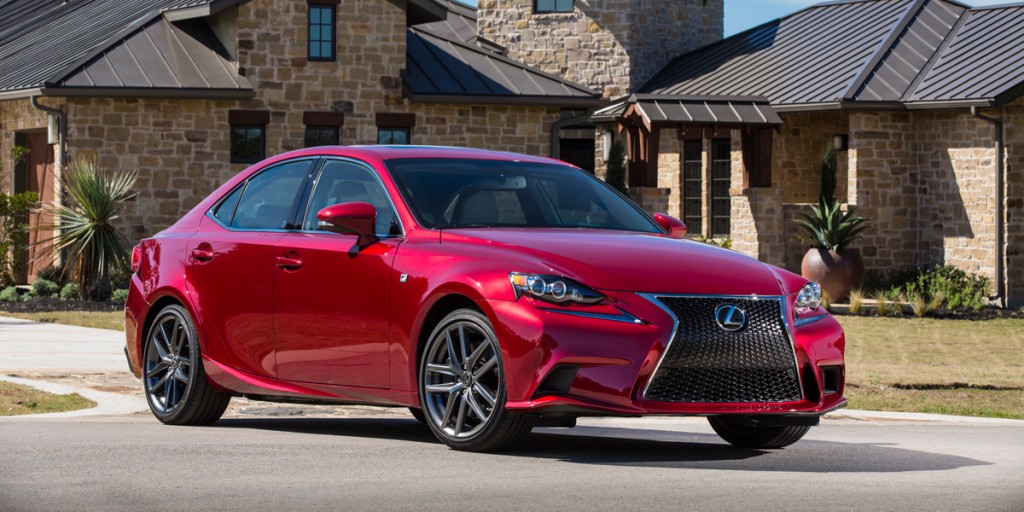 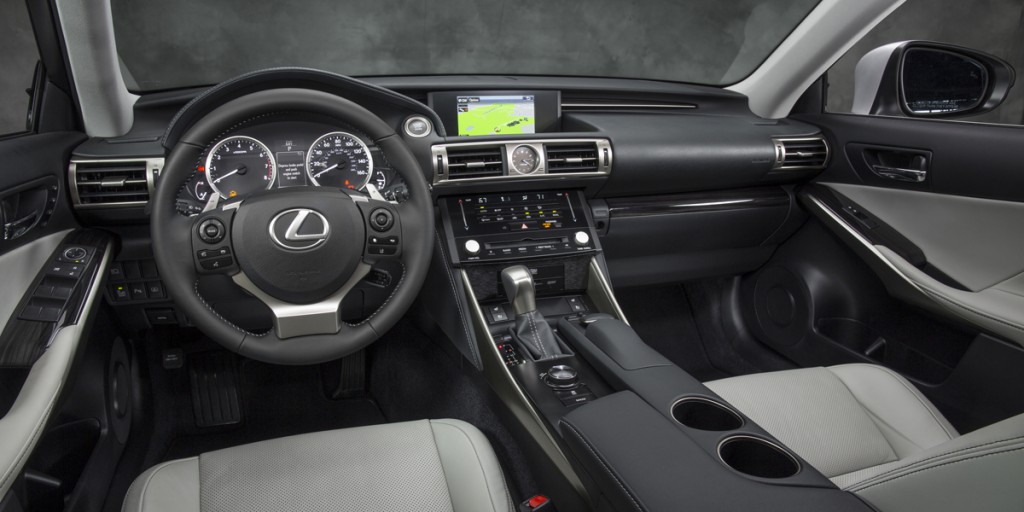 The 2014 Lexus IS sedan’s redesign helps it keep pace with class rivals. The carryover engines means that the new IS doesn’t leapfrog any of its competitors in terms of performance or fuel economy. However, the added rear seat space is a real plus, and the new safety and infotainment features are welcome as well. IS is definitely worth a look, though be sure to check out the Cadillac ATS, BMW 3-Series Sedan, and Mercedes-Benz C-Class as well.

The IS 250 was the entry-level version of Lexus’ sporty premium-compact car. Its upmarket sibling was the more-powerful, more-expensive IS 350. Both the IS 250 and IS 350 sedans were redesigned for the 2014 model year. However, the 2013 IS sedan’s companion versions–namely the IS 250C and IS 350C 2-door convertibles and the high-performance IS F sedan–remained on sale as 2014 models, but were not redesigned.

The redesigned IS received fresh styling, new features, and a longer wheelbase. The new body had a more-aggressive, sculptured look via distinct design touches such as Lexus’s signature “spindle” grille, LED daytime running lights separate from the headlights, and an upswept rocker-panel character line. Overall dimensions weren’t drastically changed, though the wheelbase was stretched by 2.7 inches and overall length grew 3.4 inches. These alterations helped add 1.6 inches in rear-seat legroom.

The 2014 IS 250 and IS 350 were each sold in a single trim level with the choice of rear-wheel drive or all-wheel drive. The “base” model was nicely equipped with standard features such as keyless access and starting, Bluetooth wireless cell-phone link, power sunroof, heated rearview mirrors, auto-dimming rearview mirror, and two USB jacks. Heated front seats were standard on AWD models.

Stand-alone options (many of which were new for 2014) included a rearview camera, adaptive cruise control with collision mitigation system, front and rear park assist, blind-spot alert with rear cross-traffic alert, and lane-departure alert. The optional navigation system (which could be ordered with or without a Mark Levinson-brand premium sound system) included a rearview camera, HD Radio with complimentary traffic and weather, and Lexus’ Remote Touch control interface and Enform infotainment system.

The IS 250’s 2.5-liter V6 powertrain was largely carried over from the 2013 model, and its horsepower rating was unchanged at 204. Both the RWD and AWD versions of the IS 250 used a 6-speed automatic transmission with steering-wheel paddle shifters; a manual transmission was not offered.

The IS 350’s 3.5-liter V6 engine was also largely carried over from the 2013 model. Horsepower stood pat at 306. The rear-wheel-drive IS 350 used an 8-speed automatic transmission, while the AWD version was equipped with a 6-speed automatic.

This evaluation is based on preview test drives of prototype vehicles.

Acceleration in the IS 250 is casual from a stop, and builds to only adequate “go” once underway. Liberal use of the throttle pedal is required to summon decent passing power. The transmission is smooth and responsive. In IS 350, acceleration is robust in both city and highway driving. A Drive Mode Select knob allows the driver to choose between ECO, Normal, or Sport settings that alter powertrain and steering response; F Sport models add a Sport S+ mode for extra-spirited driving. The 8-speed transmission is crisp and responsive. Steering-wheel paddles enable on-demand shifting. No opportunity yet to test an all-wheel-drive IS.

No opportunity to measure fuel economy. Premium-grade gas is required.

IS rides tautly, but is on par with class competitors. In the interest of nimble handling, the suspension is tuned for a firm, well-controlled feel. As a result, large bumps and potholes can register sharply. The F Sport package’s sport suspension further stiffens the ride.

IS sedans have a nicely balanced, athletic driving character, with minimal body lean in fast turns. F Sports have even sharper moves. The steering feel is quick and communicative. The brakes have a linear feel and good stopping power.

The IS 250’s engine note is prominent at high rpm when accelerating (and this engine needs to run at high rpm for decent acceleration), but settles down well enough in constant-speed cruising. The IS 350’s exhaust note sounds rich and sporty in fast acceleration. Wind noise is very well controlled, but tire roar can be intrusive on coarse highway surfaces.

The gauges are clearly marked and easy to read. An angled center-stack control panel and higher-than-average console put most controls within easy reach. The climate control system uses a touch-sensitive “button-less” temperature setting that can be adjusted with the swipe of a finger; it’s a novel touch. The optional navigation system uses the Lexus Remote Touch interface, a console-mounted touchpad which operates similar to a computer mouse. The system takes some getting used to for users accustomed to a touchscreen interface, but some drivers might soon prefer it.

Upscale materials give the sporty-looking interior a convincingly high-quality feel. Even the base “NuLuxe” faux-leather upholstery has a high-end feel. The F Sport package brings plenty of unique interior trim pieces that give an even sportier vibe.

Leg space is decent for most front-seat occupants, but headroom can be cramped for taller adults. The standard seats are comfortable and nicely padded, with decent support in spirited cornering. The F Sport brings snugger-fitting sport seats with more-pronounced bolsters, but we didn’t find them to significantly compromise comfort. The tall body shape and rather short rear window limit rear visibility.

The 2014 redesign brings much-needed extra space, but the rear seat is still a rather confined area for anyone over 6-feet tall. Legroom is just OK behind a short front-seat passenger, and quickly grows tighter as the front seats are adjusted rearward. Headroom is cramped for six-footers. Narrow door apertures can make entry and exit tricky.

Though the 2014 IS gets a 60/40 split folding rear seat that previous models didn’t offer, cargo room is not a strong point. Trunk space is not particularly generous, and the wheel wells and sickle-type trunk-lid hinges further intrude on the usable space. Interior small-items storage space is so-so. The center-console cupholders can’t accommodate large beverages, and the console bin is a bit smaller than the class norm.

Model Tested: IS 350 with navigation