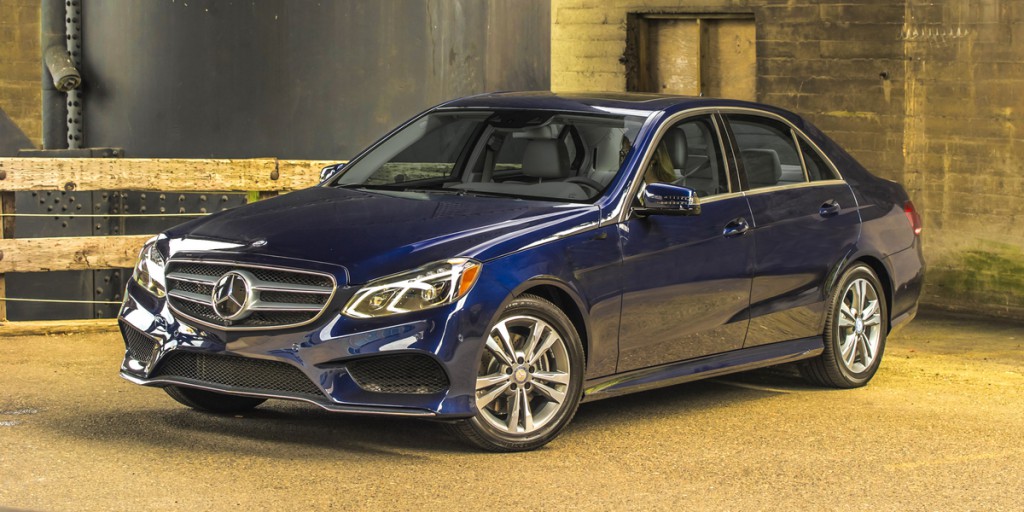 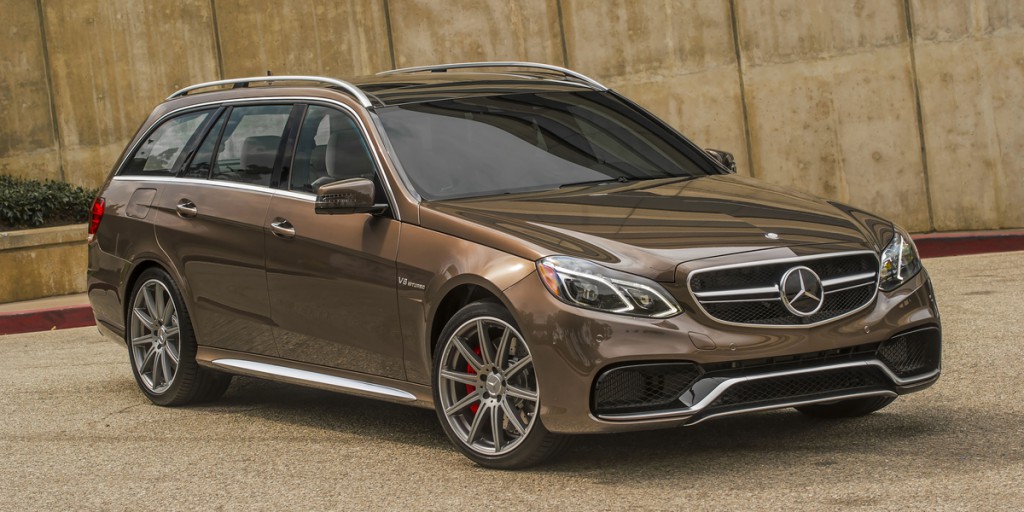 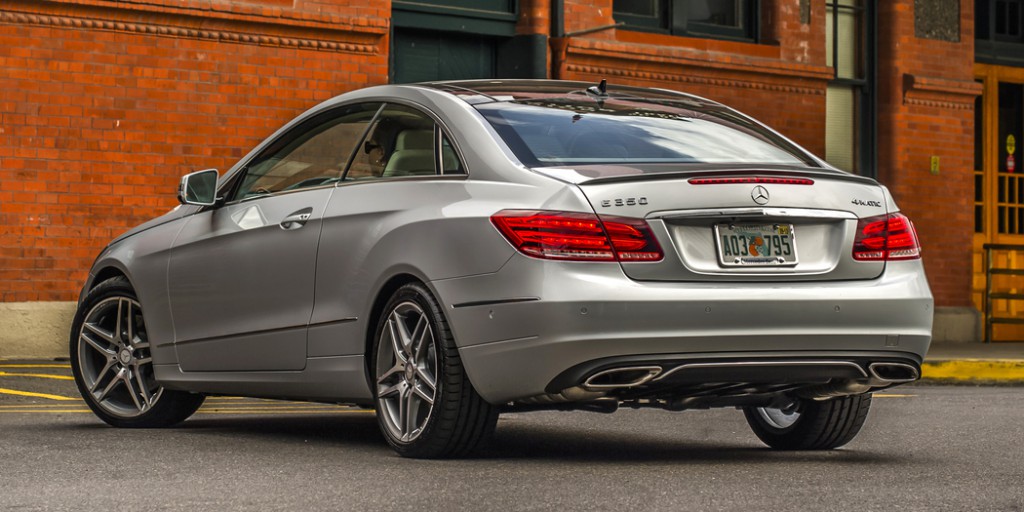 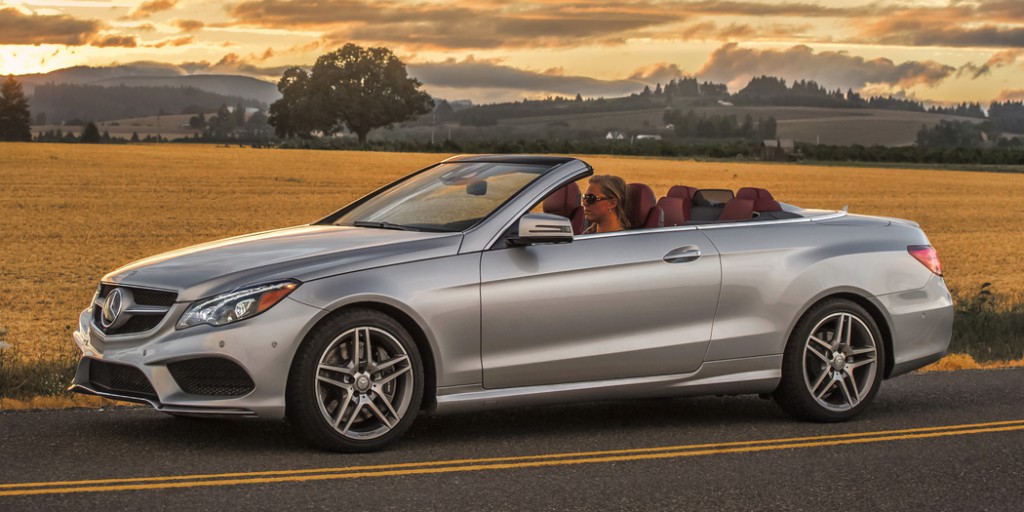 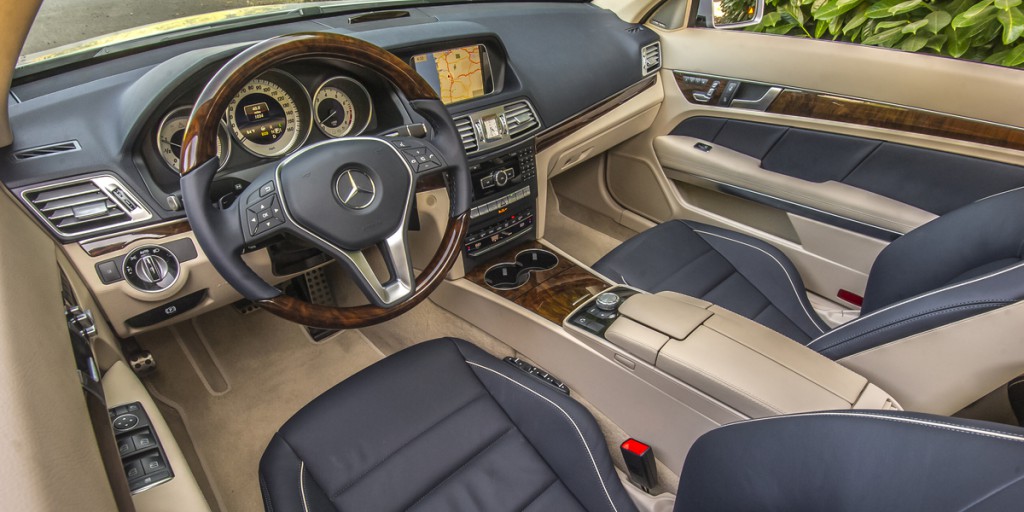 While not as overtly sporty in popular trim levels as midsize offerings from Audi or BMW, the E-Class is rewarding to drive, and rivals larger premium sedans for highway composure. Prices are high, but few vehicles in any class can match the E-Class’ enviable blend of performance, mechanical refinement, and luxury appointments.

The 2014 Mercedes-Benz E-Class was a midsize luxury car that slotted between the compact C-Class and large S-Class in the Mercedes-Benz lineup. The 2014 E-Class launched in sedan and wagon body styles, while the coupe and cabriolet followed soon after. Sedans and coupes were offered with the choice of rear or all-wheel drive, while cabriolets were all rear drive and wagons were all-wheel drive only.

The E-Class was most commonly compared with the Audi A6 and BMW 5 Series. Also similar in price and mission were the Cadillac CTS models, Infiniti Q70 (formerly M37), and Lexus GS 350.

Last redesigned for 2010, E-Class underwent a substantial freshening for 2014. Mercedes stylists revised the front, rear, and cabin of the car, while a number of new safety features were added as well. New to the lineup was the diesel-powered E250 BlueTEC sedan, which featured a 4-cylinder engine, and replaced the 6-cylinder E350 BlueTEC.

For 2014 E-Class sedans were offered in E350, E550, E250 BlueTEC, E400 Hybrid, and high-performance E63 AMG and E63 AMG S-Model trim levels. Wagons were offered only in E350 and E63 AMG S-Model guises. Coupes and cabriolets were sold in E350 and E550 versions. Mercedes’ 4Matic AWD system was available on E350 and E550 sedans and E350 coupes, and standard on the E350 wagon and all E63 AMG variants. A Sport Package was available at no cost on all E350 and E550 sedan and wagon models, and included a more aggressive front fascia treatment, special 18-inch wheels, and a sport suspension. Per Mercedes, more than 80 percent of vehicles on which it was available were delivered with the Sport Package.

Additionally standard on the E550 were heated seats and 18-inch wheels and tires. Leather upholstery was also standard on E550 models, and available on E350s.

EPA estimated fuel economy ratings for the 2014 Mercedes-Benz E-Class were as follows (city/highway):

The E-Class came with all the usual safety features, plus a driver’s knee airbag, active front head restraints, brake assist, Mercedes’ Attention Assist that monitored drivers and warned them when it sensed they had become drowsy, and Mercedes’ PRE-SAFE (now Pre-Safe Plus) system. When PRE-SAFE detected an impending crash, it tightened the seat belts, closed the windows and sunroof, and moved the driver’s seat to a better position.

A Driver Assistance Package added blind-spot alert, lane-departure prevention, adaptive cruise control, and PRE-SAFE Brake that warned drivers with audible tones, then applied partial braking and finally full braking as the car approached a possible crash. For 2014 the Pre-Safe suite of safety functions added pedestrian recognition as well as rear-collision detection, which operated in a similar fashion to the front-impact detection system. Also new was a cross-traffic alert system that detected side approaching traffic at intersections.

Other safety options included a night-vision camera, front- and rear-obstacle detection, and rear side airbags.

Only V6-powered E350 models have been available for testing. In both the sedan and wagon the 3.5-liter V6 provides ample thrust, and surprising highway passing muscle. Mercedes claims E350 models, even with AWD, will reach 60 mph from a stop in less than 7 seconds, which feels about right to us.

Only models with the Sport Pkg. have been available for evaluation. Even with the sport suspension, E-Class handles rough surfaces with composed poise. The ride is firm in the traditional German-car sense, but never harsh, even over the worst street surfaces. Wagons come standard with Mercedes’ Airmatic air suspension on the rear wheels, and seem to float less over dips and swells encountered at highway speed. We have not yet tested a sedan with the available 4-wheel Airmatic suspension. Note that the 4-wheel air suspension is not available for wagons.

The E-Class is controlled and capable when driven, and with the Sport Package, arguably sporty. The E-Class is slightly less athletic than the Audi A6 or BMW 5-Series, but is rewarding to drive, nonetheless. There is modest body lean during more aggressive cornering, and the light, direct steering may seem over assisted to some drivers. Brakes feel is excellent, as is stopping power.

Very little noise filters into the cabin, no matter the source. Wind rush is almost nonexistent. What road patter is heard seems more like filtered information about the road than actual noise. The V6 engine silent under most conditions, emitting a refined, and welcome, muted roar when tapped for full-throttle passing or merging.

Mercedes’ updated COMAND system controls the audio and navigation systems. It uses an easy to reach dial located on the center console. The system works well for most audio and navigation functions, especially satellite-radio channel selection, but complicates access to some less-frequently-used functions. Mastering COMAND requires a period of regular use, but it becomes second nature soon enough.

Cabin has rich contemporary feel that appears somewhat more opulent than that of a BMW 5-Series, but may seem a bit sterile to shoppers looking for more traditional luxury trappings. Most cabin surfaces are finished with padded or rich-feeling material, and assembly quality is top notch. Knobs and switchgear move with rewarding precision and feel substantial. Bright accents in wagon cargo area look and feel classy.

Sedans offer ample front-seat head and legroom, even for taller drivers. The seats are comfortable and supportive. Visibility is generally good in all directions, though taller drivers will have to look past the left door pillar when checking to the rear for traffic. No opportunity yet to evaluate a coupe or convertible.

The sedan is wide enough to offer plenty of room for two adults in the rear, though three will be crowded. Legroom is adequate for adults but not generous. Headroom is also good, and the seats themselves are comfortable. The wagon’s third-row bench seat is best left to small children, and is best accessed through the rear hatch. The seat folds completely out of the way when not in use, leaving a usefully flat load floor.

Sedans feature a deep, useful trunk and available split-folding second-row seat. Wagons offer a roomy cargo area and usefully low load floor. The wagon’s rear seat folds flat, allowing for easy loading up bulkier cargo items. The shifter is located on the steering column freeing up center-console space. The console itself features a top that opens to either side, allowing easy access by the driver or passenger.