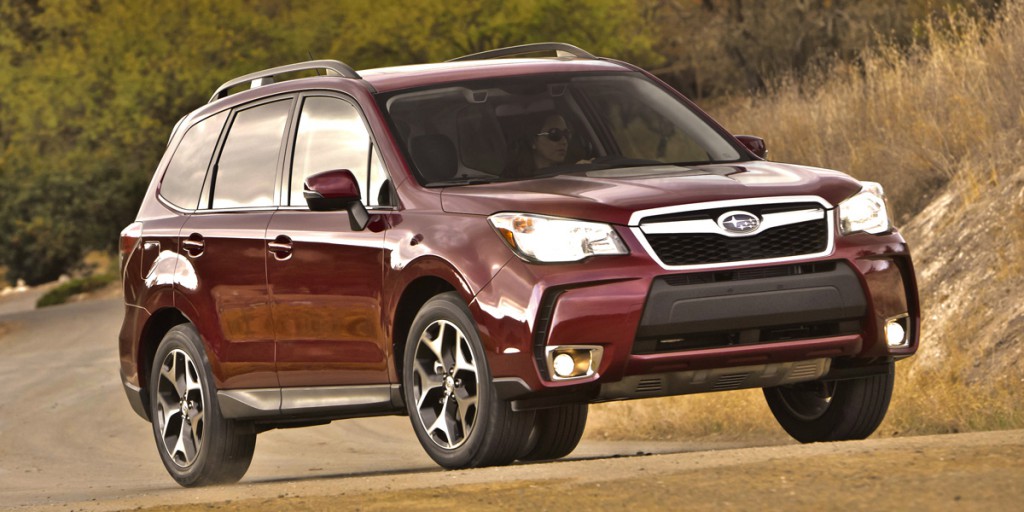 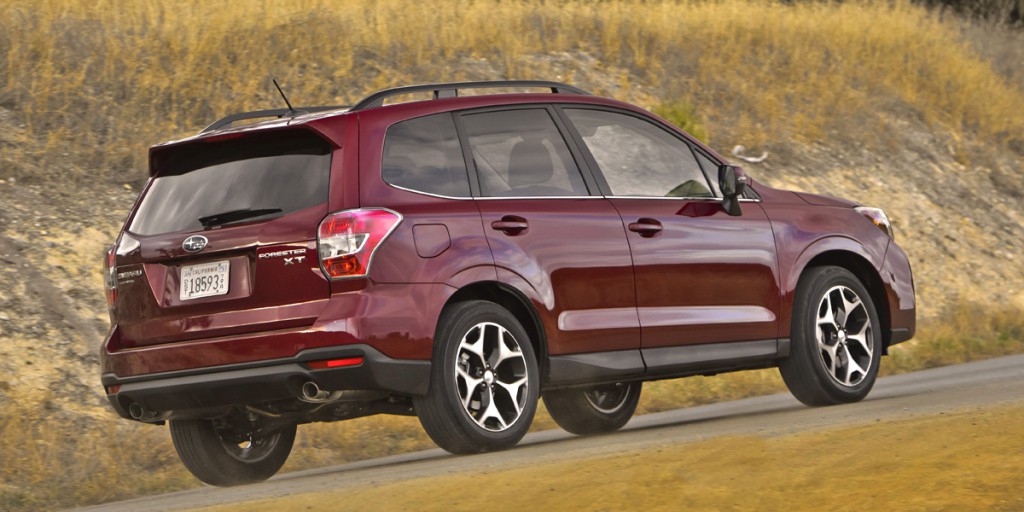 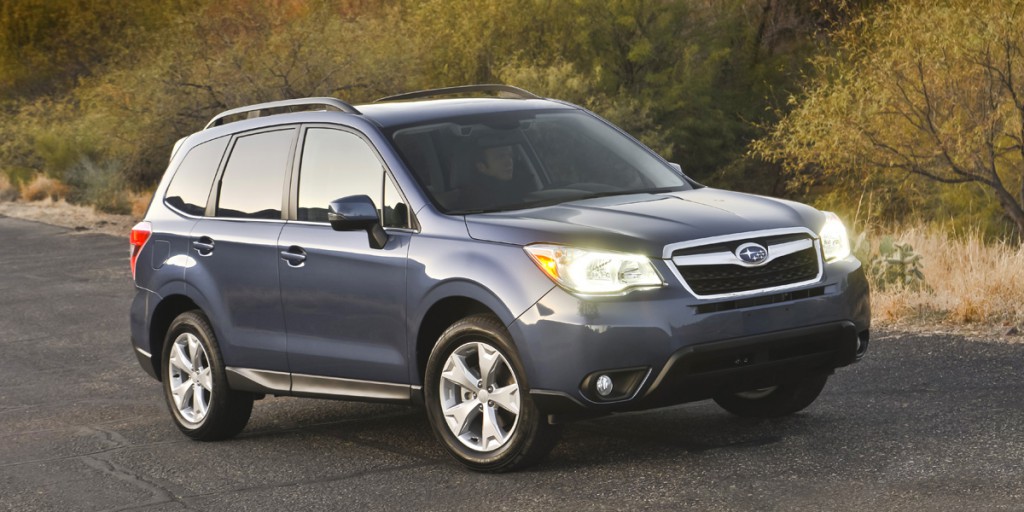 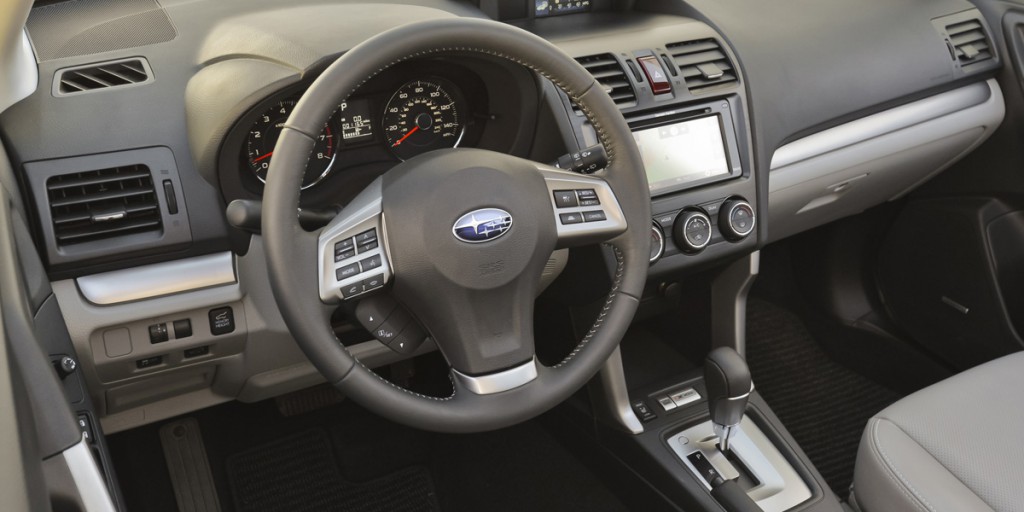 Forester remains competitive by adding passenger and cargo room, and bringing in features like hill-descent control and the optional EyeSight system with pre-collision braking and lane-departure warning. Performance of the 2.5-liter engine with the CVT doesn’t peg the thrill meter, but models equipped with it offer the best value. Turbocharged XTs have more pleasing performance, but cost more to buy and feed with no gain in utility.

Forester was Subaru’s all-wheel-drive compact sport-utility vehicle. The redesigned fourth generation of the Forester arrived for 2014 with new styling, slightly larger dimensions, new powertrains, and a number of first-time features.

Wheelbase was stretched 0.9 inch (to 103.9), which, with specially shaped front seat backs, contributed to added legroom for rear-seat passengers. They also benefited from a lower driveline tunnel and additional hip and shoulder room. The 2014 Forester was 1.4 inches longer overall and 0.6 inch wider than its predecessor. Cargo space was also increased, by as much as 9 percent.

A 2.5-liter horizontally opposed 4-cylinder engine continued to be available, but a 2.0-liter turbocharged 4-cylinder “boxer” engine replaced the 2.5-liter turbo engine used previously. They were paired with all-new transmissions: a 6-speed manual, a continuously variable transmission (CVT) that behaved like an automatic, or–for turbo models–a high-torque CVT with steering-wheel paddles that allowed for driver-selected shifts.

The top two 2.5-liter models and all turbocharged Foresters incorporated the new X-Mode system, which provided extra control in certain low-traction situations and included a hill-descent control feature. A rearview camera became standard for all but base models, and an in-dash navigation system was made more widely available. Turbo models incorporated SI-DRIVE (for “Subaru Intelligent Drive”), a multimode system that changed throttle response for faster acceleration.

The 2.5i Touring added dual-zone automatic climate control, a one-touch folding rear seatback, and turn signals integrated into the exterior mirrors. New Touring-level standard equipment included an in-dash navigation system with a 6.1-inch touchscreen, electroluminescent instrumentation, 8-speaker Harman/Kardon audio system, and a power liftgate that could be programmed to raise to a specified height.

The 2.0XT Premium received a turbocharged 4-cylinder engine, high-torque CVT with SI-DRIVE (including paddle shifters), X-Mode, a sport suspension with 18-inch wheels and uprated brakes, and leather-wrapped steering wheel and shifter handle. The 2.0XT Touring received the same amenities included on the 2.5i Touring. Frontal styling of turbo Foresters differed slightly from that used on 2.5i models. XTs also sported a body-color rear roof spoiler and dual stainless-steel exhaust tips.

The CVT was available at extra cost for the base 2.5i and 2.5i Premium, and the All-Weather Package was optional on Premiums equipped with the CVT. The in-dash navigation system was optional for 2.5i Premium and 2.0XT Premium models and the 2.5i Limited. It came with an upgraded 6-speaker audio system and smartphone integration with the Aha platform that created access to Internet-based information and entertainment services.

Both Touring-level models could be equipped with a driver-assist technology package. Aside from keyless access and starting and high-intensity discharge headlights, the package extended Subaru’s EyeSight system to the Forester. EyeSight provided adaptive cruise control, pre-collision braking and throttle management, and lane-departure warning.

Forester 2.5i models had a 170-horsepower 2.5-liter 4-cylinder engine that used Subaru’s traditional horizontally opposed “boxer” design. The 2.5i and 2.5i Premium models came standard with a 6-speed manual transmission. A CVT that behaved like an automatic was optional on those Foresters and standard on the 2.5i Limited and 2.5i Touring.

Forester 2.0XT models were equipped with a 250-horsepower turbocharged 2.0-liter 4-cylinder engine. It also used Subaru’s traditional boxer design. The only transmission available on turbocharged Foresters was a CVT.

All Foresters were all-wheel drive.

Foresters came standard with all expected safety features. New for 2014 were anti-whiplash front seats, a driver’s-knee airbag, brake override that cuts engine power if the driver simultaneously applied the brake and accelerator past a certain threshold, and impact-sensing fuel cutoff that activated in an airbag-deployment crash.

Forester 2.5i models had a 170-horsepower 2.5-liter 4-cylinder engine under the hood. The 2.5i and 2.5i Premium models came standard with a 6-speed manual transmission. A CVT that behaved like an automatic was optional on those Foresters and standard on the 2.5i Limited and 2.5i Touring. Forester 2.0XT models used a 250-horsepower turbocharged 2.0-liter 4-cylinder engine. The only transmission available on turbocharged Foresters was a CVT. Both engines used Subaru’s traditional boxer design, and all Foresters were equipped with all-wheel drive.

The 170-horsepower 2.5-liter 4-cylinder has sufficient power for around-town driving, but the new continuously variable transmission that behaves like an automatic does it no favors on the highway. The CVT seemed to be less of a hindrance to the XT’s livelier turbocharged 2.0-liter 4-cylinder. Indeed, two of the three selectable modes in the SI-DRIVE throttle-control system in the XT allow drivers to make manual shifts via steering-wheel paddles. No opportunity to test a Forester with the new 6-speed fully manual transmission that is standard in some 2.5-liter models.

In Consumer Guide testing, a turbocharged 2.0XT returned 24.3 mpg in driving that was slightly more highway than city. Subaru recommends premium fuel for maximum performance from turbocharged models; other models use regular.

On pavement, the ride of 2.5i models is comfortable, with harshness noticeable over only larger road imperfections. Rutted off-road trails can set the Forester to rocking, though. Even with some stiffer suspension settings in 2.0XT models, ride is not appreciably different.

The new Forester continues its predecessors’ car-like characteristics, with responsive and well-weighted steering and acceptable body control in cornering. While braking is good in 2.5i models, it is even better in 2.0XTs, which feature slightly larger ventilated discs all around. X-Mode found in 2.5i Limited and Touring and all 2.0XTs improves traction on slippery inclines and includes an effective hill-descent control.

Some wind and road noise was evident on all surfaces. Subaru’s naturally aspirated “boxer” engine emits a gravelly note that never fully fades, even in gentle cruising, and the CVT makes it more noticable as acceleration increases. The turbo engine is quieter and more refined.

Clear, legible gauges and simple-to-use controls continue to be found in the Forester. In base models, audio and climate systems reside in the center dashboard stack within easy reach for driver and passenger. Models equipped with the navigation system have a map screen in place of the radio display and buttons, and audio functions are also controlled through the screen. A color LCD display mounted high in the center of the dash shows a variety of information and serves as the screen for the back-up camera that is standard in all but the base 2.5i.

Forester’s cabin features a mix of hard plastics and soft-touch surfaces that comes off as more sturdy than luxurious. A mix of tones on dash and door panels in some models brightens the interior, as do bright- and brushed-metal trims. The 2.5i Touring we tested had supple perforated leather seats.

In front, headroom and legroom are generous, and cabin space has grown wider. There’s also more space between front passengers and the dash. Entry and exit benefit from lowered side sills. All-around visibility remains excellent, too.

The new Forester’s lengthened wheelbase most benefits rear-seat passengers in the form of added legroom, which is ample under most circumstances. Even with the front seats all the way back, moderately tall adults will find just enough room to ride comfortably. Larger rear door openings ease entry and exit. Hip room has been increased and the driveline tunnel has been lowered, making it easier to accommodate a middle passenger if need be.

Subaru admits Forester’s overall cargo volume isn’t the largest available, but the most is made of the available space thanks to a wide liftgate opening and rear seats that fold flatter than before (though still not completely flush with the floor). Touring models with either engine feature a standard power liftgate with a memory function that will restrict the gate’s upward travel. Interior storage is good, with useful door pockets and a generous glove box.