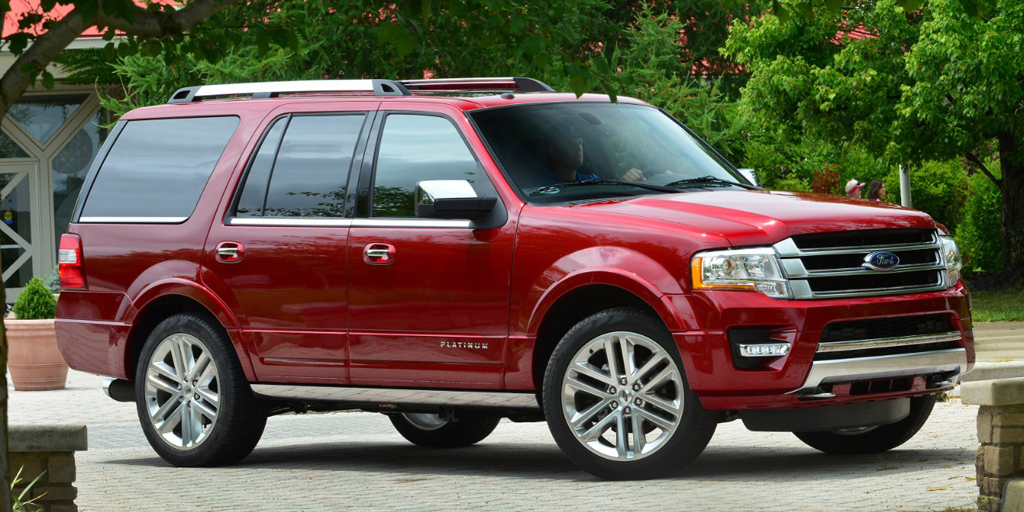 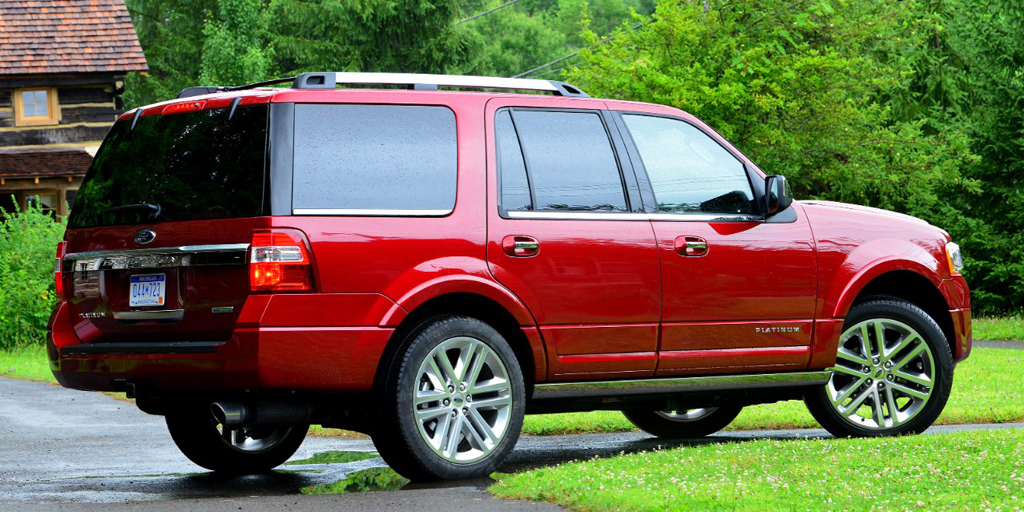 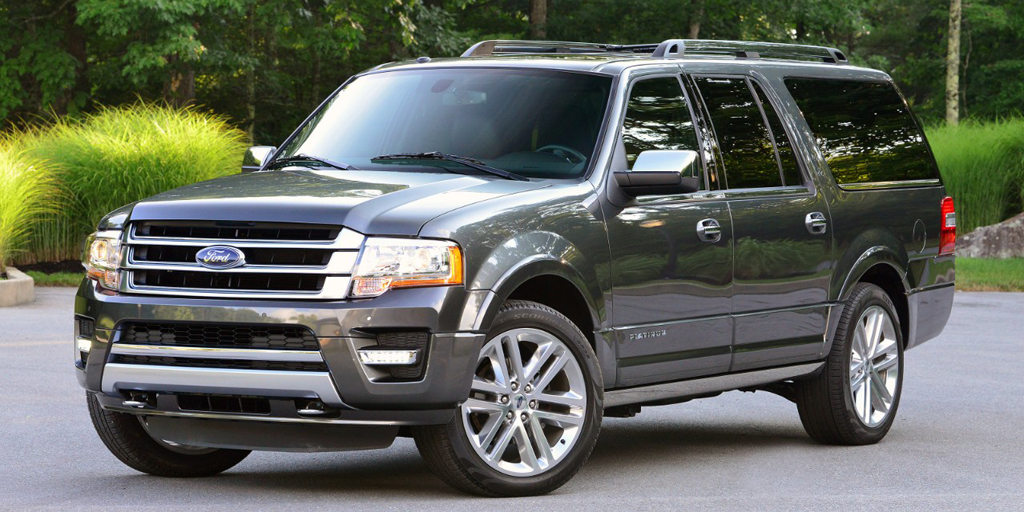 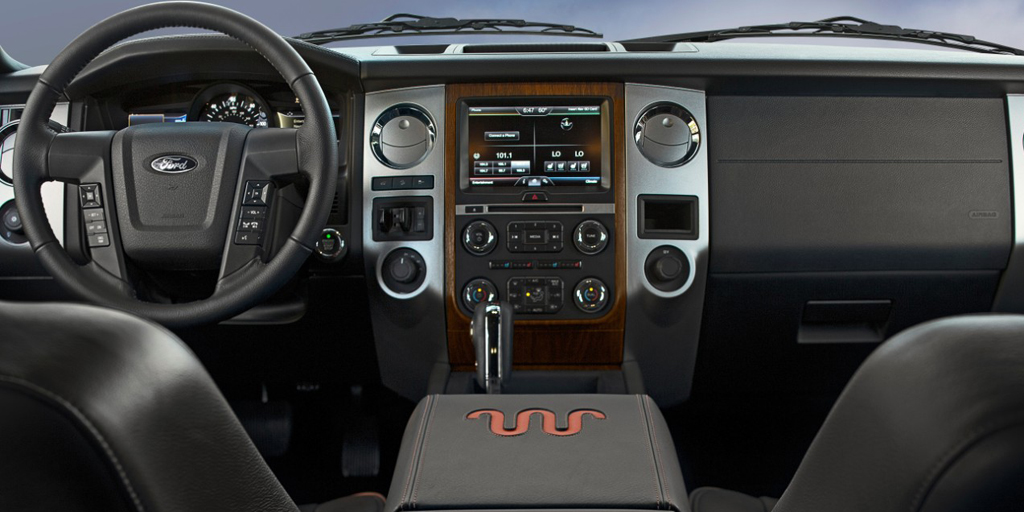 Though the demand for large, truck-based SUVs gets seemingly smaller by the day, there is still a market here for folks who genuinely need the space and capability these vehicles provide. Expedition excels for all the right reasons: good power, a spacious cabin, and superior cargo flexibility.

Ford’s large SUV got a significant update for 2015. The biggest news was that a V8 is no longer available—Expedition’s sole engine was Ford’s EcoBoost twin-turbocharged 3.5-liter V6. Other new features included freshened exterior styling, an updated interior, and electric power steering. Driver-selectable adjustable suspension, keyless access and starting, blind-spot alert system with rear cross-traffic alert, rearview camera, and the SYNC with MyFord Touch infotainment system were among the available features. As before, two versions of the Expedition were available: the standard 119-inch-wheelbase version, and an extended-length variant with a 131-inch wheelbase.

Expedition’s sole engine is now Ford’s EcoBoost twin-turbocharged 3.5-liter V6 and a 6-speed automatic is the only transmission. 2WD and 4WD are available.

Consumer Guide® recently drove a regular-length (119-inch wheelbase) Expedition King Ranch 4×4. In recent years, the King Ranch has been the top of the line, but for 2015 the Platinum is the new leader of the pack. All Expeditions are substantially refreshed with updated styling, an updated interior, electric power steering, and a shift to a 365-horsepower turbocharged 3.5-liter V6 for power. Newly available infotainment and safety features include a blind-spot monitor, cross-traffic alert, rearview camera, and front- and rear-obstacle detection, along with an 8-inch touch screen with Ford’s Sync and MyFord Touch systems.

Of course, the value in big SUVs like the Expedition is in space and towing capability. To say there’s ample leg and head room up front is an understatement. Indeed, the driver could really use a dead pedal against the left side wall to give his or her non-driving foot a natural place to rest in the wide-open spaces on the floor. Three adults will fit across the comfy, flat-floored middle row with ease, and a trio of narrower grown-ups can enter the 3rd row—and live to tell about it. Hinged middle-row seats flip up to create access to the 3rd row. Six-footers sitting in front might track back far enough to crowd middle-row occupants for leg room, but until that happens there’s OK space there. Head room for the 2nd- and 3rd-rows is very good, too. Windows are tall for good visibility. Step-in height is a bit lofty in 4-wheelers, but standard running boards are there to help.

The food, drink, and assorted personal items that up to 8 passengers bring with them will find homes around the cabin. Moving from front to back on the wide center console are a small open bin, 2 open cup holders, and a padded-top console box that’s pretty roomy—enough so to contain media-device inputs and a removable organizer tray for coins and the like. The back portion of the console contains a pair of cup holders for middle-row passengers, plus climate controls and power points for their use. There’s a smallish glove box in the dash, and narrow pockets in all 4 doors (with bottle holders in the front doors). Third-row denizens have use of 3 cup holders molded into the side panels (2 on the left), and shallow trays on either side.

Cargo space in 119-inch-wheelbase Expeditions runs from just 18.6 cubic feet with all 3 rows of seats up to a considerable 108.3 cubic feet with the 2nd and 3rd rows folded. The 60/40 third-row seats fold absolutely flush with the cargo floor; when folded, 2nd-row seats (which are in a 40/20/40 configuration) rest a little higher than the rest of the cargo floor, and there is a gap between them and the rest of the space. A power liftgate and power 3rd-row seat retractor were among the standard conveniences on the model tested.

Previously powered by a 310-horsepower 5.4-liter V8, the Expedition now relies on the twin-turbo EcoBoost V6 joined with a 6-speed automatic transmission. In most normal operation the Expedition belies the fact that there are only 6 cylinders under the hood, and with 420 lb-ft of torque on tap, a towing-package-equipped example is rated to haul 9200 pounds. While the intent of placing this engine in the Expedition may have been to wring some additional fuel economy out of the hulking hauler, it’s still no penny-pincher. This driver averaged 15.04 mpg from a 125-mile stint, 75 percent of it in city conditions. That just tickled the EPA city-mileage estimate (highway performance is projected at 20 mpg) and roughly matched his mileage from a V8-powered 2015 Chevrolet Tahoe.

With independent suspension front and rear, the Expedition boasts fine overall ride quality with fairly good bump absorption. An adaptive Continuously Controlled Damping suspension option that was found on CG’s test vehicle allows drivers to select “Normal,” “Comfort,” or “Sport” settings. The quest for cushiness in a vehicle like the Expedition can go too far. In Comfort, this tester found the big SUV to wallow somewhat around bends and over road imperfections, and pitch forward and back a little when braking.

King Ranch Expeditions feature distinctly textured and detailed leather upholstery. Other upscale standard interior features include a leather-wrapped tilt/telescoping steering wheel, dual-zone automatic climate control, heated and cooled front seats (with driver’s-seat memory settings), heated 2nd-row seats, and adjustable pedals. However, even at around $60,000, there are some reminders of cost-cutting. The material found on much of the instrument panel and doors has a pebbled texture but it’s essentially hard plastic. Woodgrain appliqués—not the real stuff; for that you have to step up to a Lincoln Navigator—pop up around the central display screen, on the console, and on the door arm rests.