CG Says: Volkswagen enters the electric-vehicle market in earnest for 2021 with the introduction of the ID.4—VW’s first purpose-built, regular-production EV. (The 2015-2019 VW e-Golf was based on a conventional gasoline-engine Golf and wasn’t widely marketed.) The ID.4 is compact crossover SUV that offers about the same amount of passenger space as the Volkswagen Tiguan compact SUV, despite being 4.6 inches shorter overall than the Tiguan. Initially, the ID.4 is only offered in rear-wheel-drive form, with a 201-horsepower electric motor. Due later in the year is an all-wheel-drive version with a second motor powering the front wheels, with total horsepower expected to be around 300. The base Pro model has an estimated range of 260 miles, while the First Edition and Pro S models are estimated to travel 250 miles. VW says the ID.4’s battery can be charged from five to 80 percent in 39 minutes at a public DC fast-charging station. The ID.4 includes three years of charging at Volkswagen’s Electrify America charging stations and buyers may qualify for up to $7500 in federal tax credit. Unlike many electric vehicles, there is no “frunk” (front trunk) storage area under the hood, but cargo room is more than respectable overall: 30.3 cubic feet behind the back seat, or 64.2 cubic feet with the rear seatbacks folded. Standard safety features include autonomous emergency braking with pedestrian detection, blind-spot alert with mitigation, lane-keep assist, adaptive cruise control with stop and go, rear cross-traffic alert, road sign display, and automatic high-beam headlights. The ID.4 is a compelling EV that offers a more conventional look and driving feel than the sporty, aggressively styled Ford Mustang Mach E, and at slightly lower prices. Driving range is competitive, though not as generous as properly equipped Mach Es. Despite its practical, everyday-driver dimensions and passenger/cargo capacity, the ID.4 is plagued by a number of unconventional controls that demand acclimation—and might be a continual source of frustration for some drivers. Still, VW’s first dedicated EV shows a lot of potential. 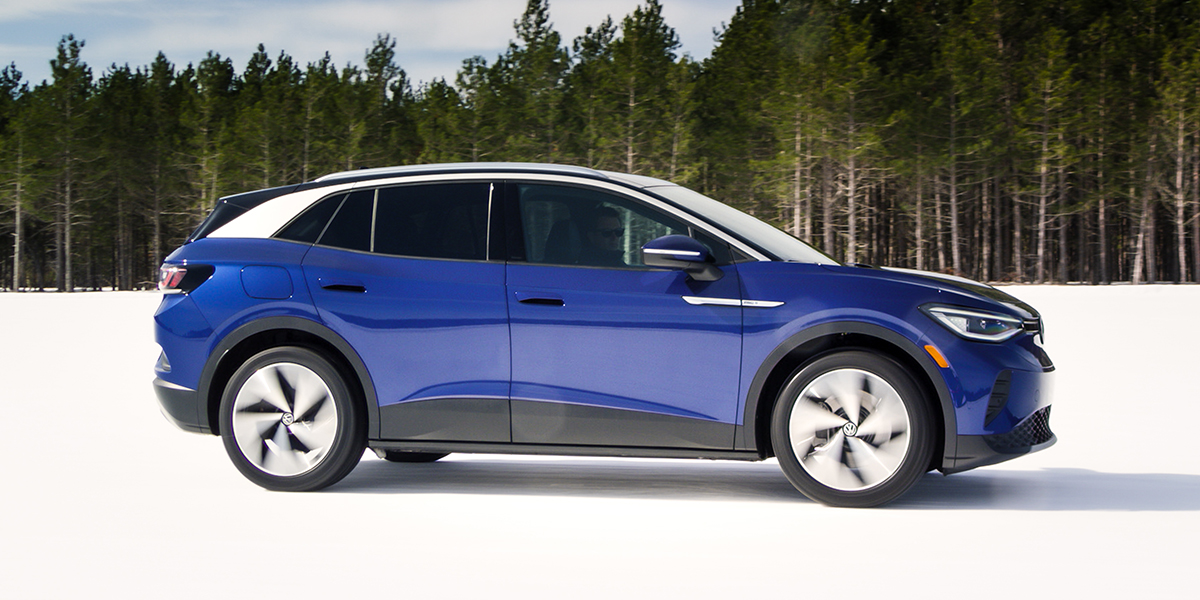