CG Says: The 2021 Cadillac CT5 adds new features. Cadillac’s Super Cruise, a hands-free, semi-autonomous driving aid that can control the car while traveling on freeways and now includes the ability to change lanes, will be available during the model year. Other newly available features include wireless Apple CarPlay/Android Auto compatibility, Buckle to Drive safety feature, and a high-definition 12-inch instrument cluster. Magnetic Ride Control suspension and limited-slip differential were formerly exclusive to CT5-V, but are now optional for the Sport model. Cadillac introduced an all-new midsize sedan for 2020. The CT5 (as in “five”) replaced the CTS (as in “ess”) as Cadillac’s midsize sedan—it’s sized to compete more directly with European rivals such as the Audi A6 and BMW 5-Series. (Meanwhile the Cadillac CT4, also new for 2020, replaced the ATS as Cadillac’s compact sedan.) The CT5 is available in Luxury, Premium Luxury, Sport trim levels, as well as a performance-oriented V-Series model named CT5-V. The base engine is a 2.0-liter turbo 4-cylinder that is rated at 237 horsepower. The step-up engine, available in Premium Luxury and Sport models, is a twin-turbocharged 3.0-liter V6 that is rated at 335 hp; the CT5-V comes standard with a 360-hp version of this engine. Cadillac will introduce a super-performance CT5-V Blackwing model, probably as 2022 model. All CT5 engines are paired with a 10-speed automatic transmission; rear-wheel drive is standard and all-wheel drive is available on all models. Noteworthy available features include a rearview mirror that can display a camera image with a wider field of vision than a conventional mirror. Available safety features include forward collision warning with autonomous emergency braking and pedestrian detection, blind-spot alert, lane-keep assist, surround-view camera with recorder, reverse automatic braking, and adaptive cruise control. Cadillac seems to have muddied the waters a bit by launching a new midsize sedan with a name very close to its discontinued predecessor, and also by recasting its V model as a midline performance machine instead of the previous super-performance Cadillacs the “V” suffix adorned. (The upcoming Blackwing will take over as Cadillac’s track-ready performance vehicle moniker.) Still, with its competitive pricing, striking styling, and lengthy list of available features, the new CT5 might sway a few European sport-sedan intenders. 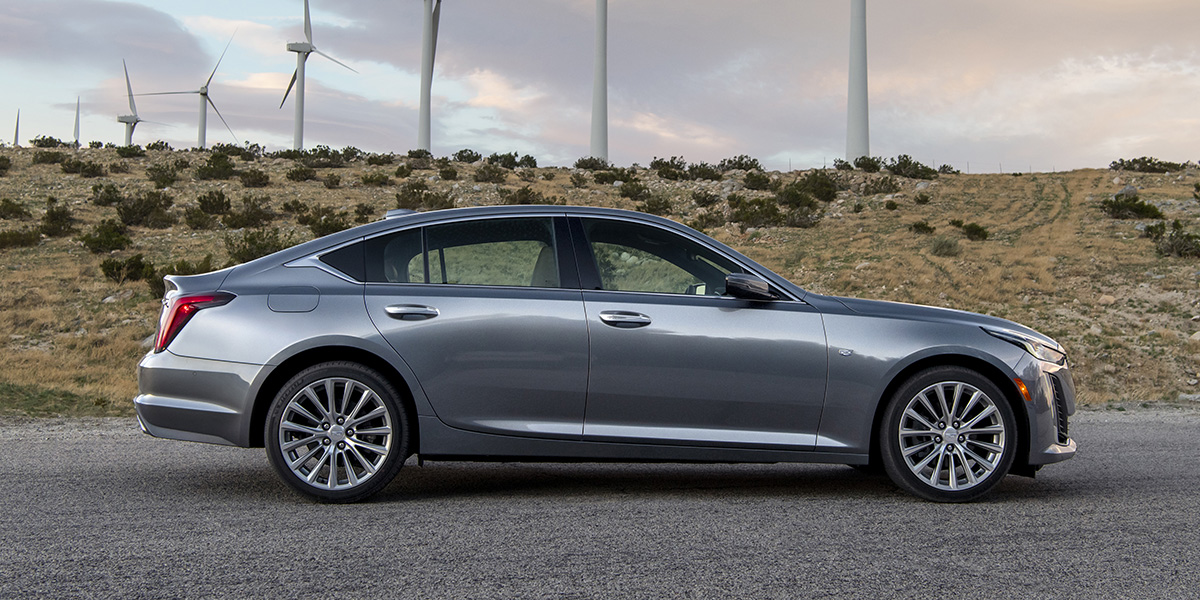