Cons: Not available in all 50 states at launch; roof pillars compromise rear visibility; not all drivers like unconventional dashboard layout

CG Says: Hyundai introduces a new pure-electric vehicle for 2022 that inaugurates a new line of EVs from the brand. The 2022 Hyundai Ioniq 5 is a 5-passenger compact crossover EV that shares some of its mechanical underpinnings with Kia’s EV6 pure-electric crossover (also new for 2022), though it has different dimensions and distinct styling. Hyundai will introduce other Ioniq pure-electric vehicles (named with differing numerical suffixes) in the near future. The Ioniq 5 is available in three drivetrain configurations. The Standard Range base model has 168 horsepower and an EPA-estimated 220 miles of range (this model isn’t available at launch; it joins the lineup later in the model year). The Long Range models come with a larger battery; the single-motor version has 225 horsepower and rear-wheel drive with an EPA-estimated range of 303 miles, and the dual-motor all-wheel-drive version has 320 horsepower and a range of 256 miles. Hyundai says a fast charger can get the Ioniq 5 up to 80 percent range in 18 minutes, and 68 miles of range in five minutes. Level 2 chargers can fully charge it in six hours and 43 minutes. Taking advantage of the flat floor of its dedicated electric-vehicle platform, along with an fairly lengthy wheelbase, the Ioniq 5 has 106.5 cubic feet of interior volume. Behind the second row is 27.2 cubic feet. Rear seats slide, recline, and fold down for flexible passenger/cargo capacity.

Ioniq 5 is available in three trim levels, all of which include a 12-inch infotainment touchscreen, Android Auto and Apple CarPlay, and adaptive cruise control. Among the standard safety features are forward collision warning with automatic emergency braking, blind-spot monitor, and lane keeping assist. The top-line Limited trim features a head-up display, 360-degree surround-view monitor, Bose premium sound system, and sliding center console. The Limited has the capability to power or charge electrical items, including another electric car, via its Vehicle to Load two-way on-board charger. Hyundai’s Blue Link connected services have additional EV-specific features such as remote control of charging, locations and availability of charging stations, and a range overlay on the map based on the current remaining battery charge. At launch, the Ioniq 5 is sold in eighteen states, with more to be announced. Hyundai will provide buyers with unlimited 30-minute charging sessions at Electrify America locations for the first two years. The ambitiously designed Ioniq 5 is a versatile, impressively executed crossover that bodes well for Hyundai’s further expansion into the EV market—it stacks up nicely against similarly priced EV rivals such as the Ford Mustang Mach E. 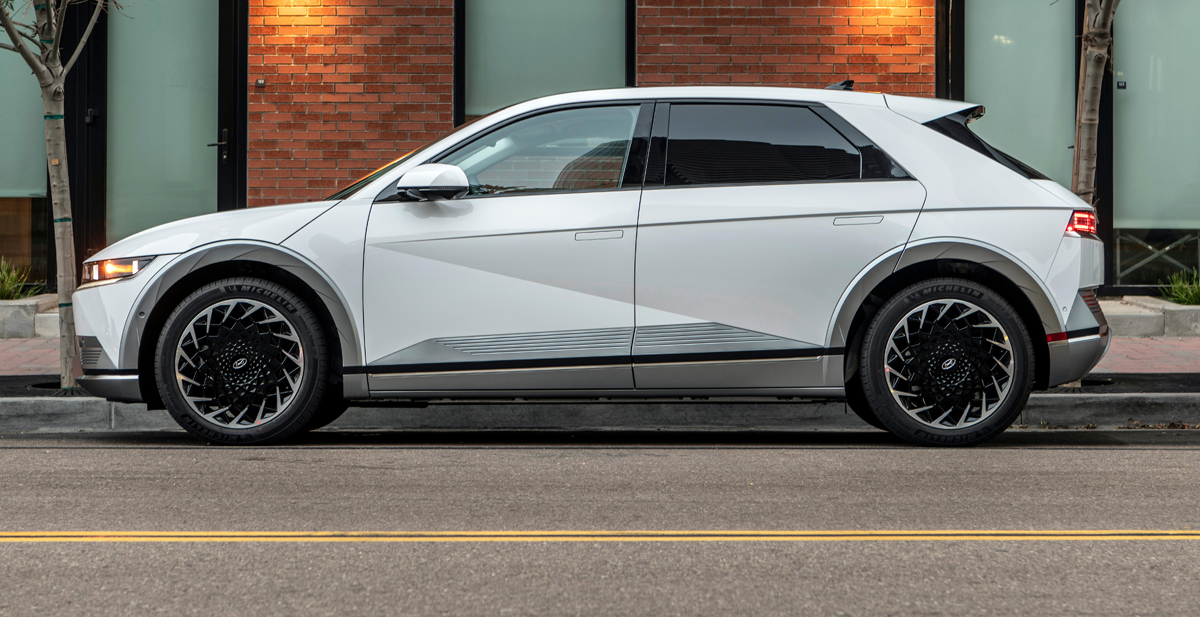