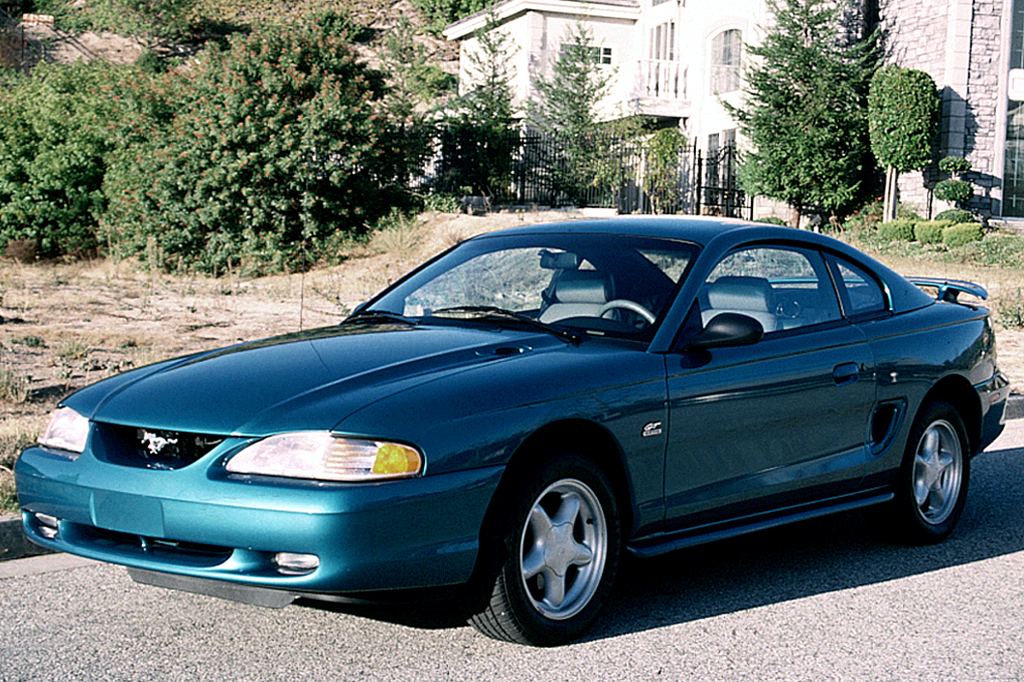 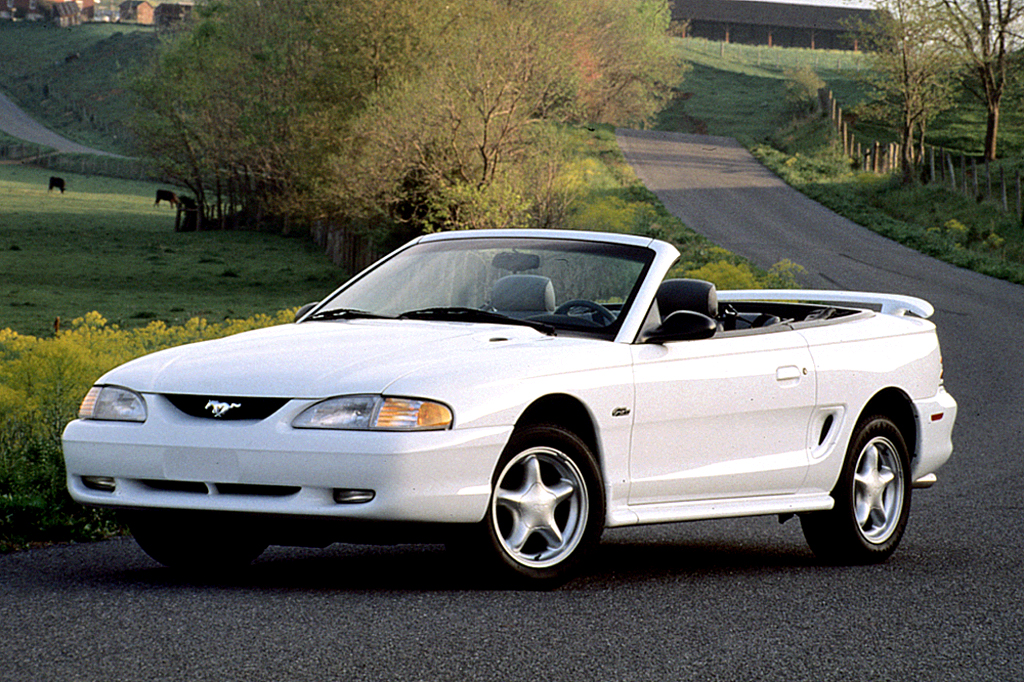 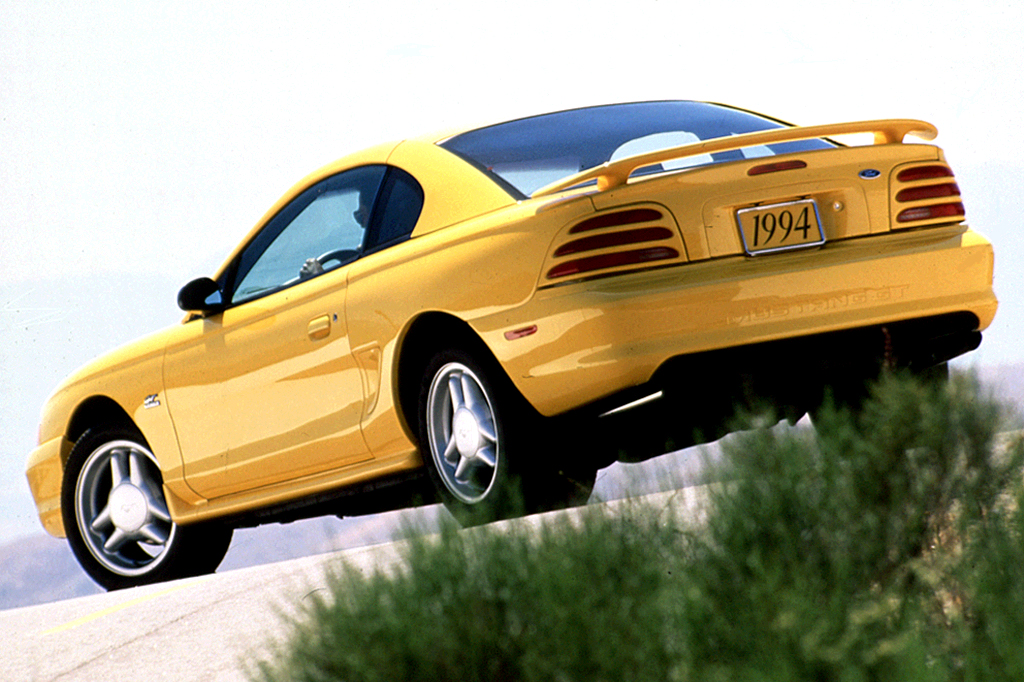 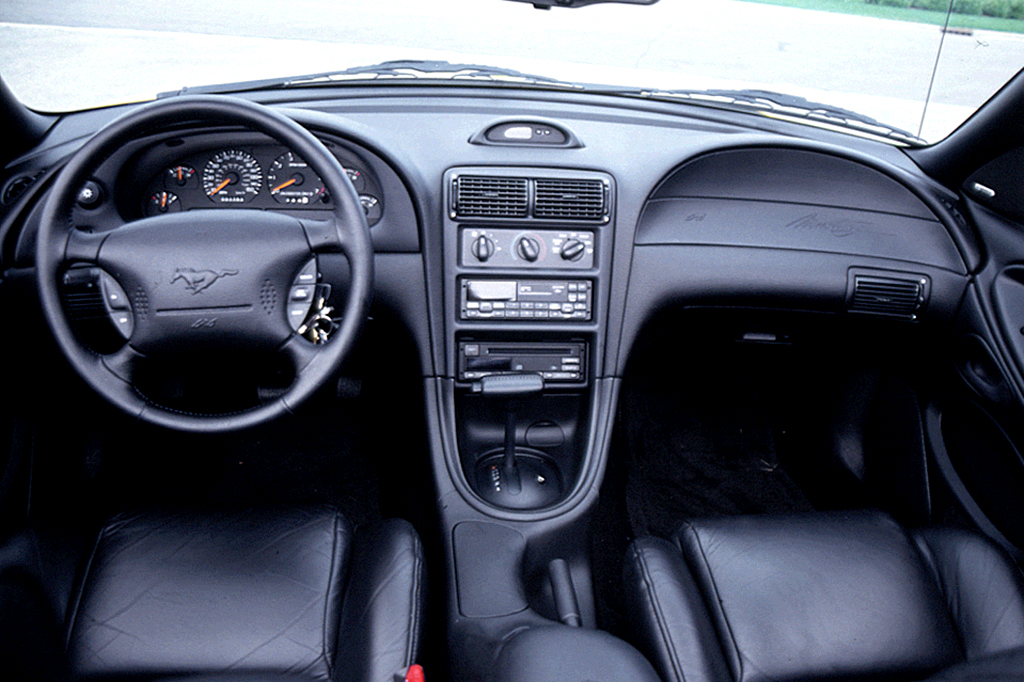 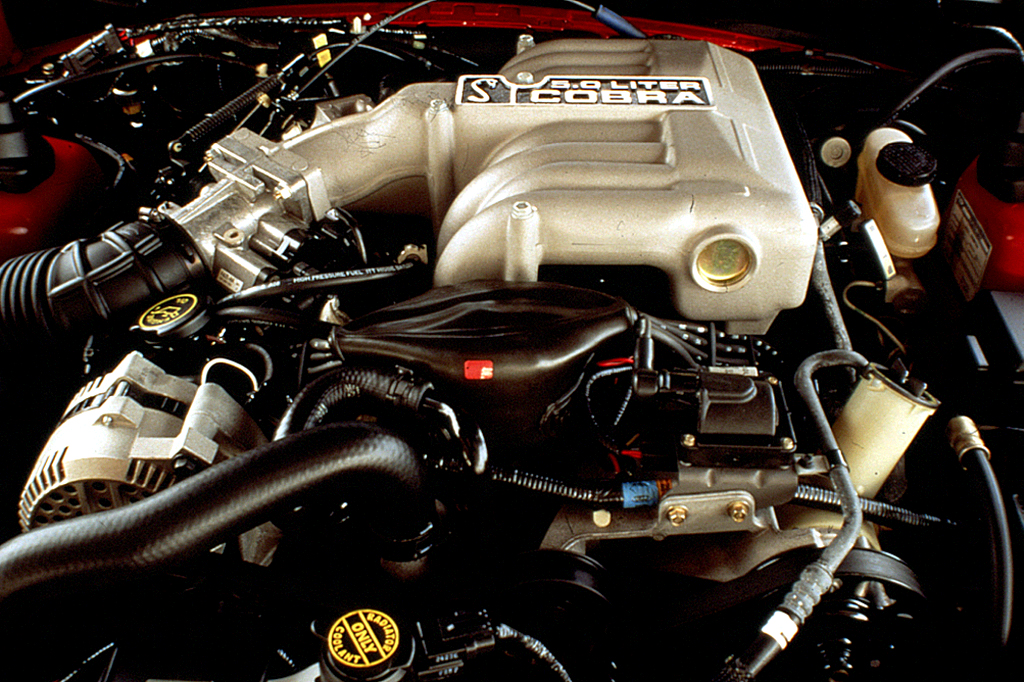 Cobras can be pricey, and don’t expect discounts on the limited-production Bullitt. Overall, though, Mustang delivers sporty performance at a reasonable price–especially in base and GT form. A major improvement over its predecessor, and more user-friendly for everyday driving than Chevy’s Camaro, the current Mustang is well worth a test drive.

Still rear drive, Ford’s popular ponycar gained new sheetmetal and dual airbags in its long-overdue redesign for 1994. Hatchbacks disappeared, but a notchback coupe and convertible remain. Exterior and interior dimensions changed only a little. Four-cylinder engines were gone. Base models got a V6 engine, while the GT held a 215-horsepower V8. Manual shift was standard; electronically controlled 4-speed automatic optional. All Mustangs now halted with all-disc brakes, with antilocking an option for the first time. Convertibles included a power top and glass rear window, with a rear defogger optional. Mustang Cobras with 240-horsepower V8s were sold only in limited quantity. Firmer suspended than ordinary Mustangs, Cobras came only with 5-speed manual shift and had all-disc antilock braking as well as a unique appearance.

The 3.8-liter V6 engine in the redesigned Mustang developed 145-190 horsepower- The GT came with a 5.0-liter V8, which sent 215-240 horses to the back axle. A 5-speed manual transmission was standard with either engine; 4-speed overdrive automatic optional, operating with electronic shift controls. The old-reliable overhead-valve V8 disappeared after 1995, edged aside by a more modern 4.6-liter V8 with dual-overhead-cam configuration. Cobras got a 305-horsepower dohc modification of the V8, whipping out 300 pound-feet of torque. The dual-cam version of the V8 disappeared for 2002 and returned in the ’03 Mach 1. Also added for ’03 was the SVT Cobra. It had a supercharged version of the Mach 1 engine that thumped out 390 horsepower and 390 pound-feet of torque.

All Mustangs take quick corners smartly, but because of a softened suspension, base cars ride with only modest jarring–considerably less shocking than in the past. A more stiffly suspended GT, on the other hand, grows harsh, actually crashing and banging over broken surfaces. Cobras and Mach 1s are stiffer-suspended yet, as expected, but their ride quality isn’t noticeably worse.

Acceleration is adequate with the V6 and either transmission, though automatic downshifts tend to be delayed when dashing uphill. Obviously, the V8 is the choice for performance, though increased weight in this generation makes that engine seem a little less peppy than before. Fuel economy is good with a V6, but not with V8 power. The 4.6-liter V8 in later models yields little acceleration improvement, but it’s smoother and more refined. Thrilling is the operative word for a session behind the wheel of a Cobra or Mach 1, both are true high-performance machines.

Wet-weather traction continues to be a problem on all Mustangs, especially V8s. All-disc brakes are fine, but we’d look for a Mustang with the optional antilocking brakes.

Entry/exit is easy enough, courtesy of the Mustang’s relatively upright stance (compared to Camaro, at any rate). Backseat space is truly tight, but the cockpit has an open, airy feel. Instruments are unobstructed, controls near at hand, and the dual airbags are a safety bonus.