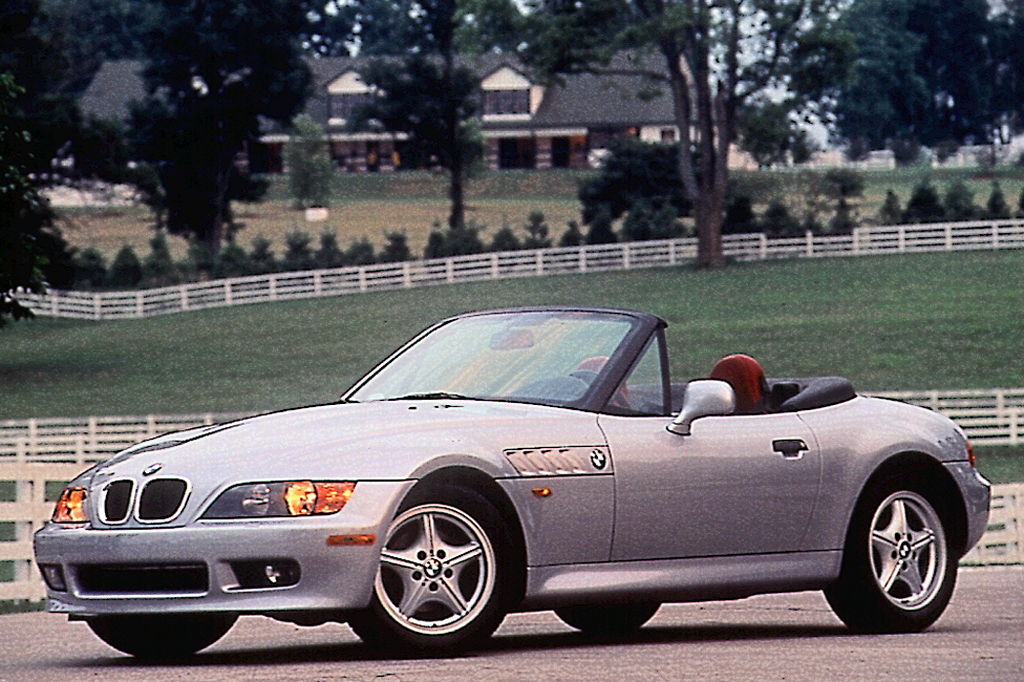 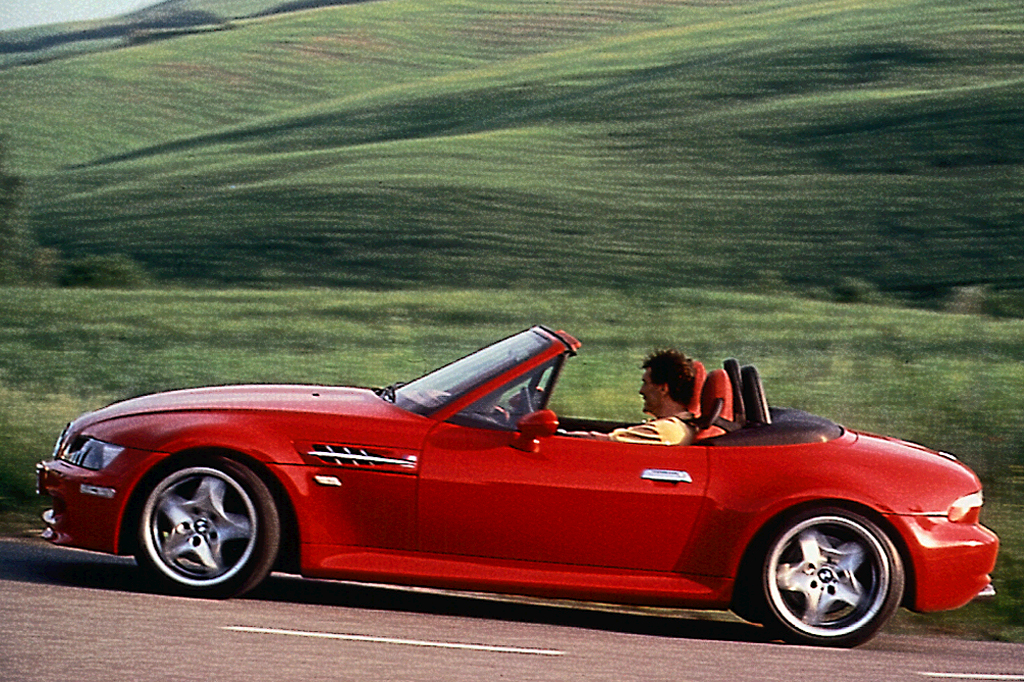 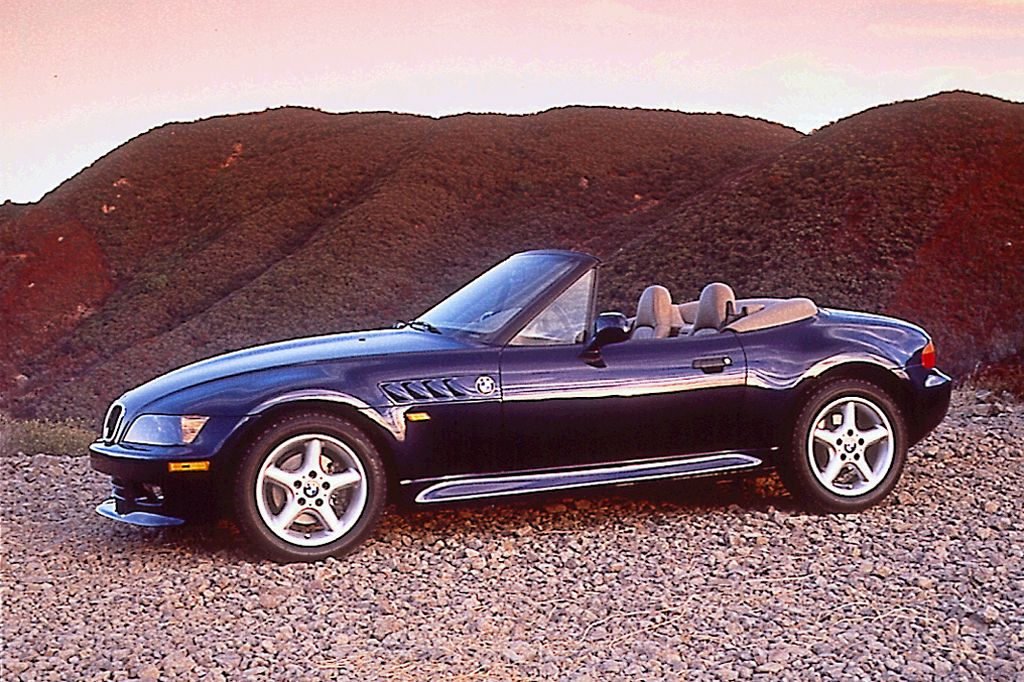 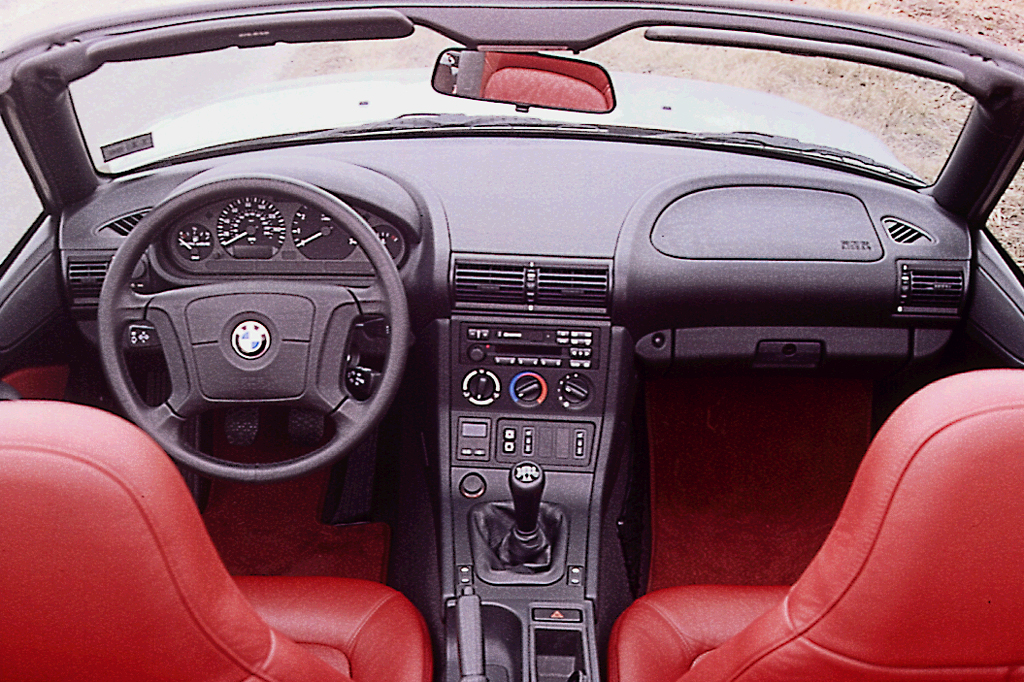 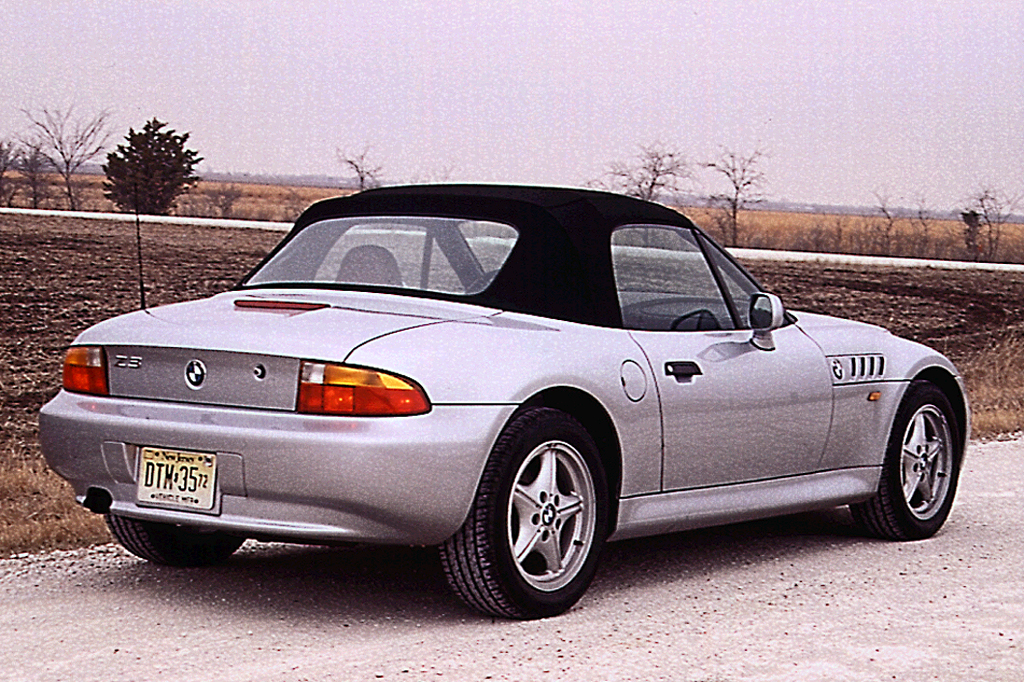 Eye-catching appearance and BMW’s reputation for handling prowess make the Z3 tempting. Still, based on performance or equipment, it’s difficult to justify paying so much more for a Z3 than a Mazda Miata. M-Series models, on the other hand, perform as promised and just might be worth the extra dollars.

Launched in spring of 1996, this was BMW’s first sports car in 40 years. Based on the 3-Series chassis, the racy-looking 2-seater Z3 was produced at BMW’s plant in South Carolina. Wheelbase was shorter than the 3-Series, which lent many drivetrain and other components to the roadster. Only a 4-cylinder engine was available initially. The 1.9-liter dual-cam 4-cylinder engine produced 138 horsepower. A 5-speed manual transmission was standard, with 4-speed automatic and traction control optional. Standard equipment included dual airbags, antilock 4-wheel disc brakes, a limited-slip differential, and 16-inch tires on alloy wheels. The manually operated convertible top had a plastic back window.

For its first season and a half, only a 4-cylinder engine was available, with a choice of 5-speed manual or 4-speed automatic transmission. The dual-overhead-cam four produced 138 horsepower and 133 pound-feet of torque. A Z3 2.8 with a dual-cam inline 6-cylinder engine arrived during 1997, rated at 189 horsepower and 203 pound-feet. During the 1998 model year, a high-performance M roadster arrived in limited numbers, carrying a 3.2-liter inline 6-cylinder engine that produced 240 horsepower. Only manual shift was available in the M roadster. The 4-cylinder was dropped in ’99 in favor of a 2.5-liter inline six. This engine made 170 horsepower and 181 pound-feet of torque. For 2001, a 3.0-liter I6 was added, and both 2.5-liter and 3.2-liter I6s gained horsepower.

Even though horsepower and torque are greater in a 4-cylinder Z3 than in Mazda’s Miata, the BMW roadster does not feel any swifter–partly because it carries more pounds. Automatic is slower yet. Because the Z3’s 4-cylinder engine does not develop much power below 3500 rpm, it cannot get an eager jump off the line when you push the gas pedal hard. Past 3500 rpm, acceleration becomes brisk. Performance is better with the 2.8-liter 6-cylinder engine. It doesn’t set any records either, however. The 6-cylinder’s extra torque is most beneficial because it reduces the amount of shifting when driving in town. A test manual-transmission 2.5i did 0-60 mph in a brisk 7.0 sec and had ample midrange passing punch. The 3.0i/manual hatchback felt more muscular–BMW lists 0-60 at 5.9 sec–but didn’t present significantly more usable acceleration on the street than the 2.5i. M-Series roadsters and hatchbacks have exhilarating performance–almost reminiscent of a Corvette.

Wind noise is intrusive at highway speeds, making it hard for the two occupants to converse in normal tones. Because these are sports cars, noises from the engine, road, and wind increase markedly with speed. Firm suspensions allow little lean in turns, and the Z3 corners as if it’s on rails. For a car with such high cornering limits, the ride is supple–more comfortable than the Miata’s. Still, it gets jiggly on anything other than glass-smooth surfaces. All told, the Z3 lags behind Mercedes’ SLK in smothering bumps. Braking is straight and short. A “panic” stop from 60 mph took about 105 feet.

Space is adequate for medium-size adults, but large folks might feel cramped. Trunk space is meager by anything other than sports-car standards. The manual folding top is fairly easy to raise and lower, but the plastic back window is subject to easy wrinkling and scratches, especially if not cared for properly. Like most convertibles, the top’s rear quarters are wide enough to restrict visibility over the driver’s shoulders. Inside, you’ll find a no-frills, Teutonic design–not inappropriate for a sports car. Standard “leatherette” upholstery on the 1.9, however, with its odd pebble-grain pattern, looks rather cheap for a car of this caliber.