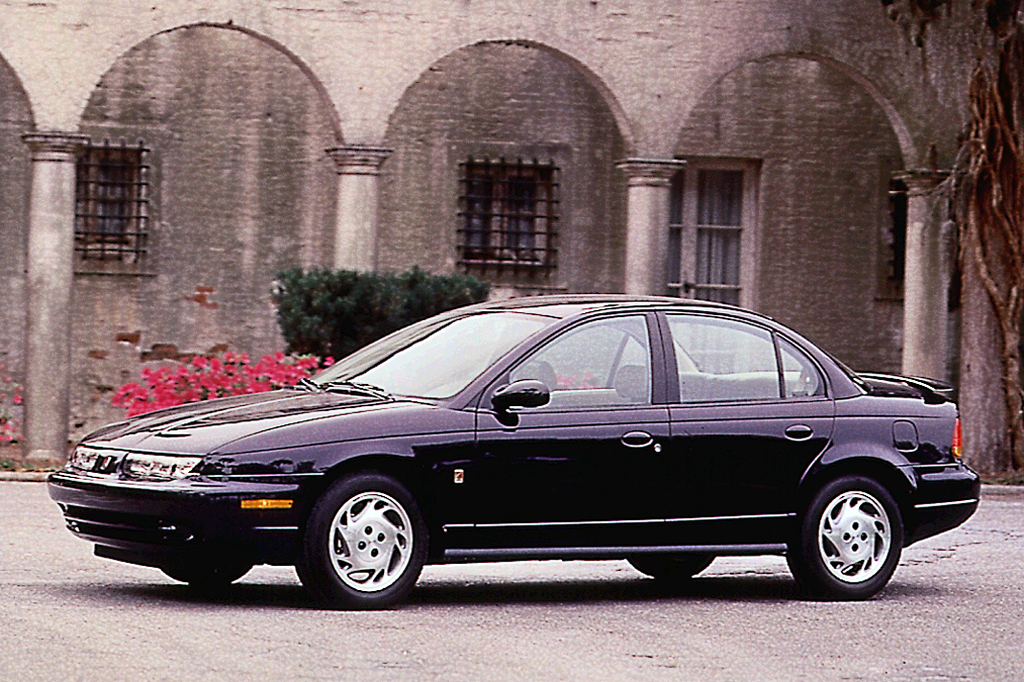 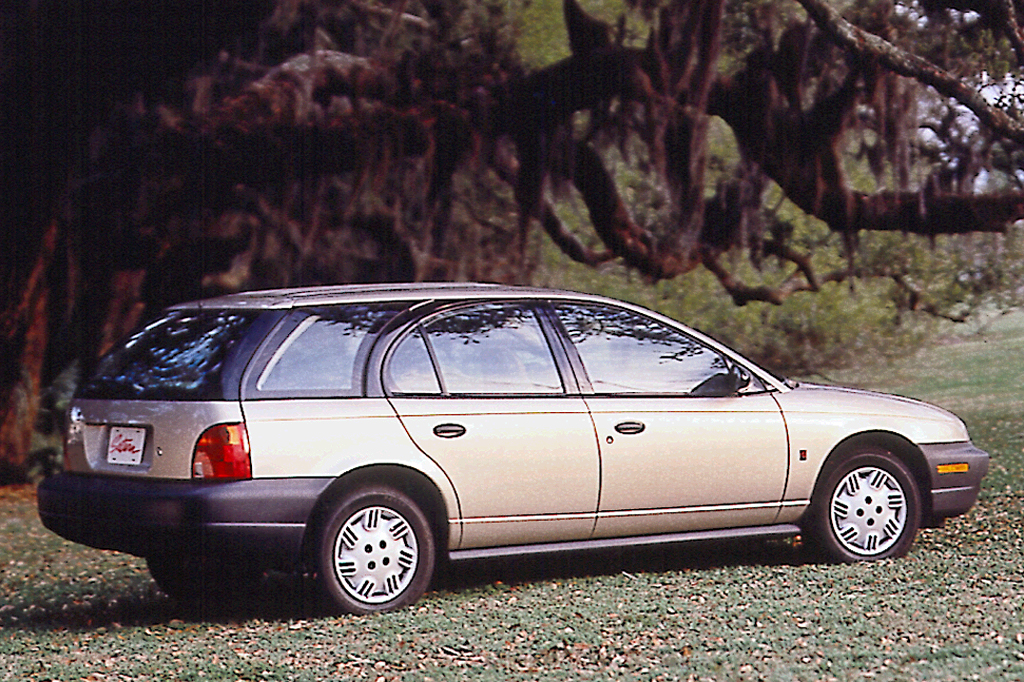 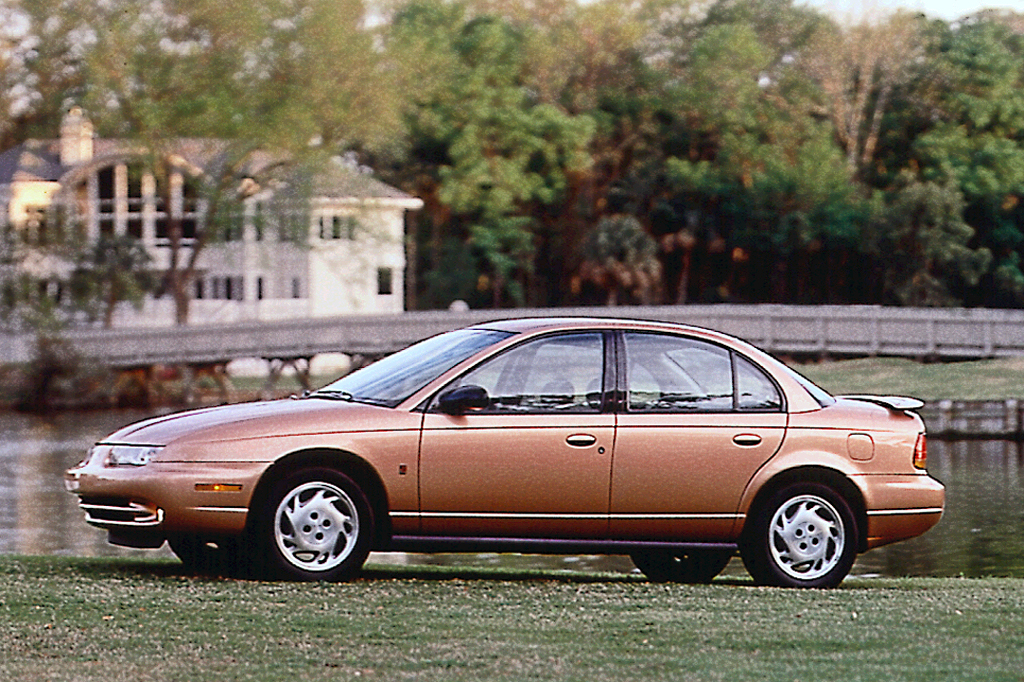 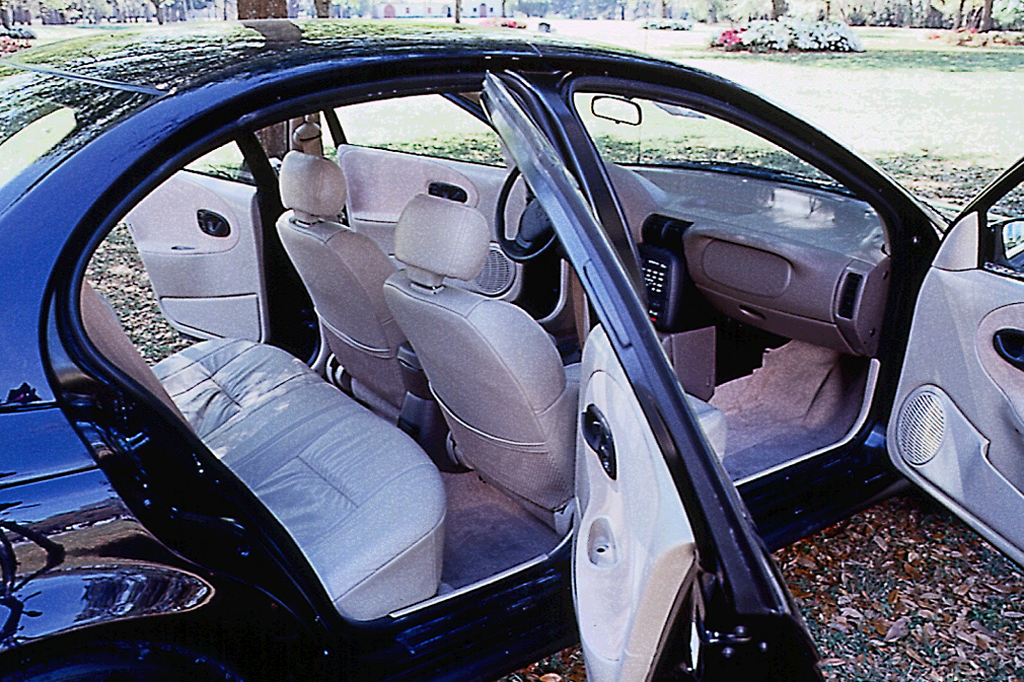 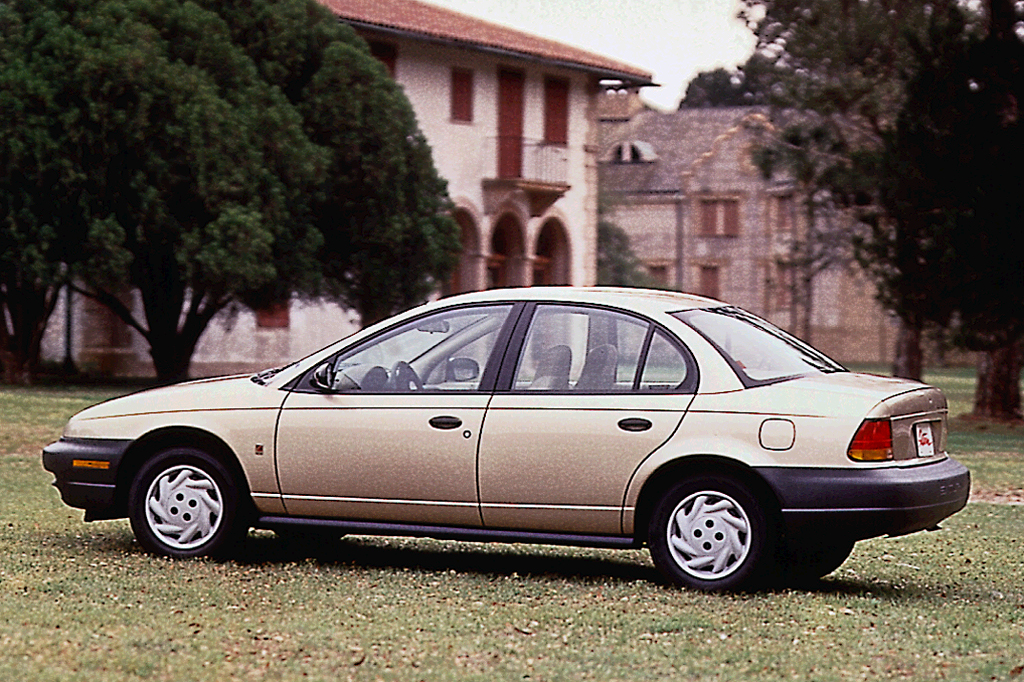 Despite some real improvements, these sedans and wagons still lag behind such rivals as the Civic and Corolla.

Saturn sedans and station wagons got a fresh look for 1996. Coupes took another year to get their equivalent redesign. Front and rear styling on the sedan echoed Saturn’s initial themes, but the sedan got a more rounded roof, which created more head room for front and back seats. As before, all vertical panels (doors, fenders, and front/rear fascias) were made of plasticlike polymer material. The roof, hood, and trunk were made of steel. Lower-level models wore graphite-colored bumpers, whereas bumpers on upscale models were body-colored. Wheelbase of both the sedan and wagon was unchanged at 102.4 inches, but the new bodies were slightly longer and narrower. Doorways were enlarged. Dual airbags again were standard, and front seatbelts were now height-adjustable. Engines were carried over from the 1991-95 generation. A 100-horsepower, single-camshaft 1.9-liter 4-cylinder went into the SL and SL1 sedans and the SW1 wagon. A dual-overhead-cam version, rated at 124 horsepower, went into the SL2 sedan and SW2 wagon.Optional antilock brakes now included traction control, whether the car was equipped with a 5-speed manual transmission or the optional 4-speed automatic.

Two 1.9-liter 4-cylinder engines were available under Saturn hoods. A single-overhead-cam version, rated at 100 horsepower, went into the SL and SL1 sedan and the SW1 wagon. The SL2 sedan and SW2 wagons got a dual-overhead-cam engine that made 124 horsepower. Any Saturn might have either a 5-speed manual transmission, or optional 4-speed automatic.

Engine and road noise were reduced with the 1996 redesign, but these cars still failed to head the subcompact class in terms of refinement. Both engines sound coarse and unrefined in hard acceleration. Engines did quiet down somewhat in 1998, but road noise remains considerable at highway speeds. The ’99 models appear quieter yet–markedly closer to the competition, finally.

Automatic-transmission operation also had been imperfect. Shift quality improved in this generation, and the 4-speed automatic is less harsh than before. This automatic transmission generally changes gears smoothly and downshifts promptly for passing.

Different tires gave the SL2/SW2 models a more comfortable ride, with less impact harshness and thumping on rough pavement. These sedans and wagons corner with pleasing swiftness and control. Body lean in turns is less in the SL2 and SW2, and their tires hold out longer before squealing in protest when you try an overly quick corner. On all models, the suspension absorbs minor bumps well, but rough roads can cause abrupt, even harsh reaction, which are felt by occupants.

Front head and leg room is sufficient for taller folks, and firm seats provide good lateral support. Back seat room is adequate for people under 5-foot-10 or so, provided the front seats aren’t pushed back too far. The back seat is not particularly comfortable, and getting in and out is awkward because the door opening is narrow at the bottom. Dashboards flaunt large, clear gauges. Stereo and climate controls are mounted in a pod that protrudes from the dashboard, mounted too low for easiest access by the driver. Visibility is helped by the low dashboard and deep side windows, but the tail is too high to easily see straight rearward. Trunk space is adequate, and a low liftover eases the strain of loading/unloading luggage.