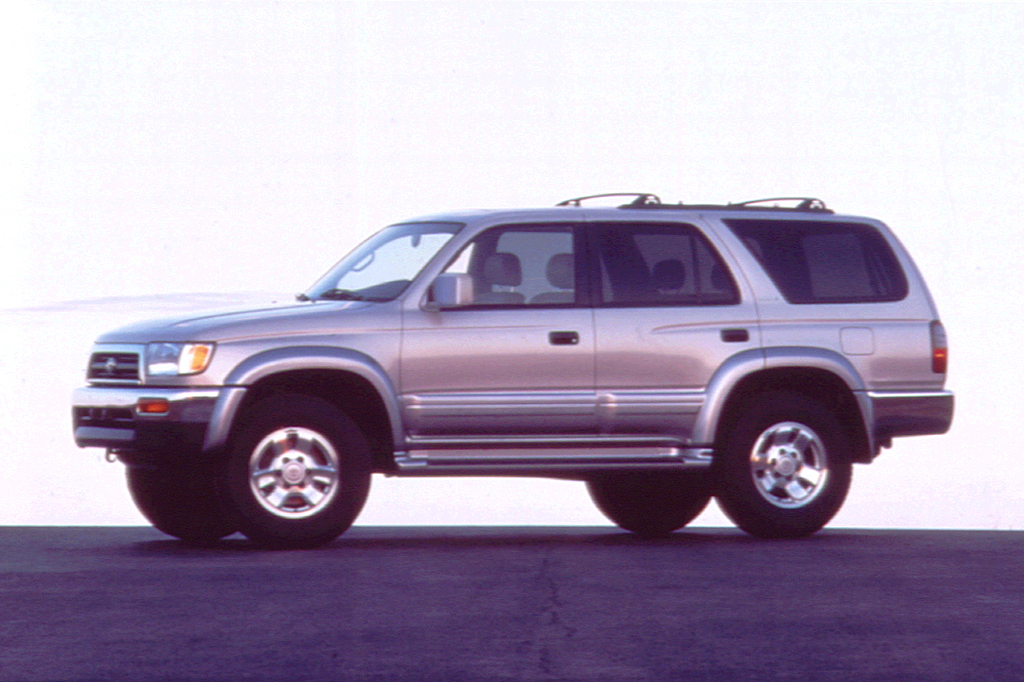 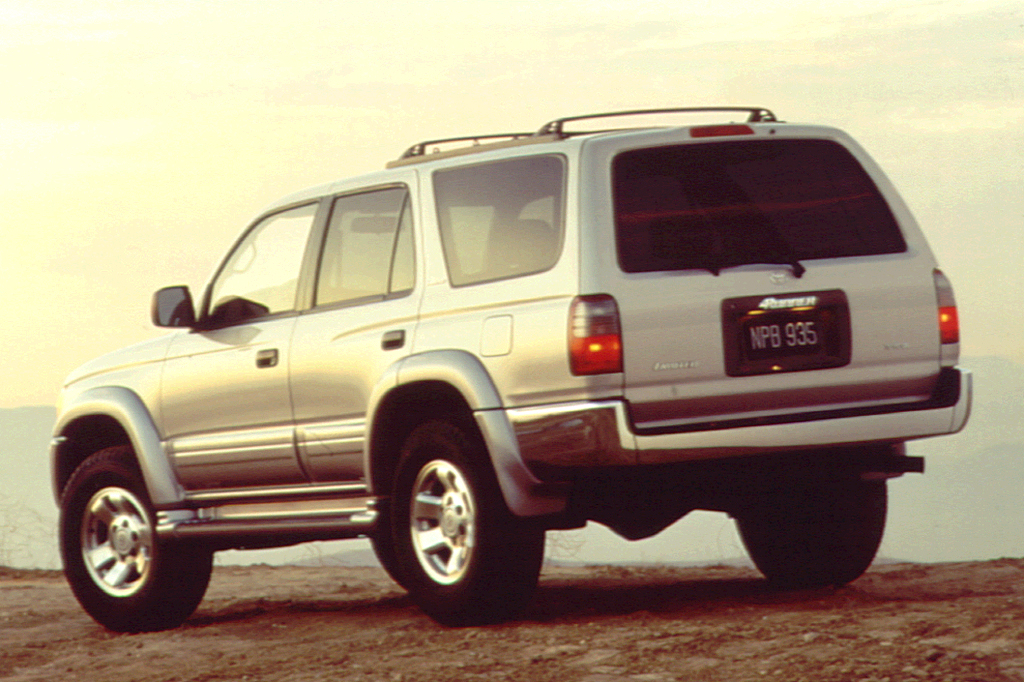 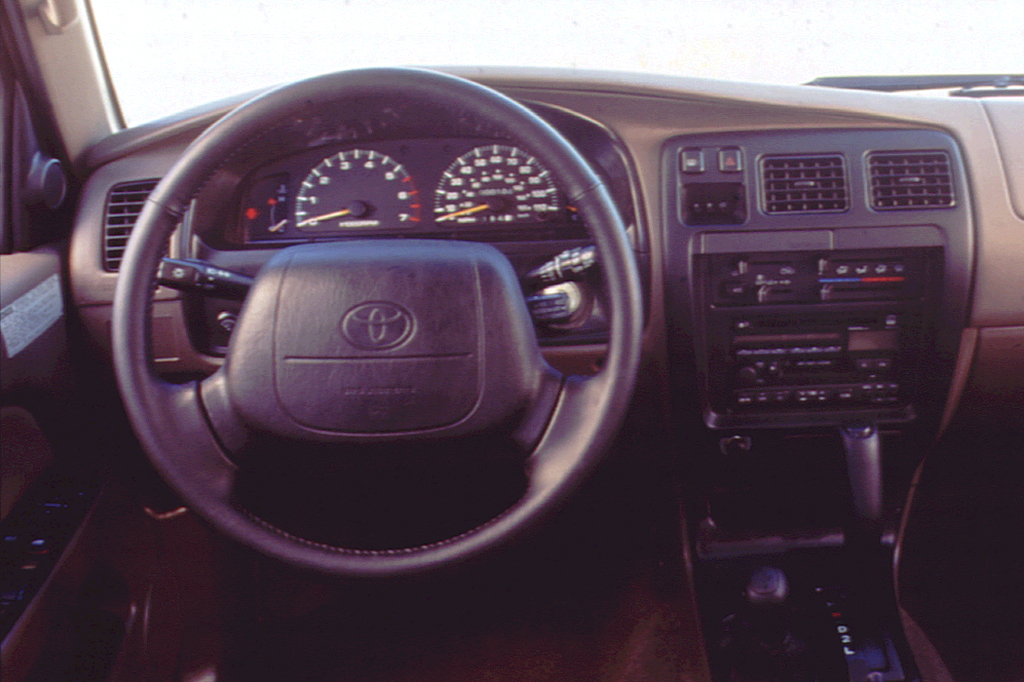 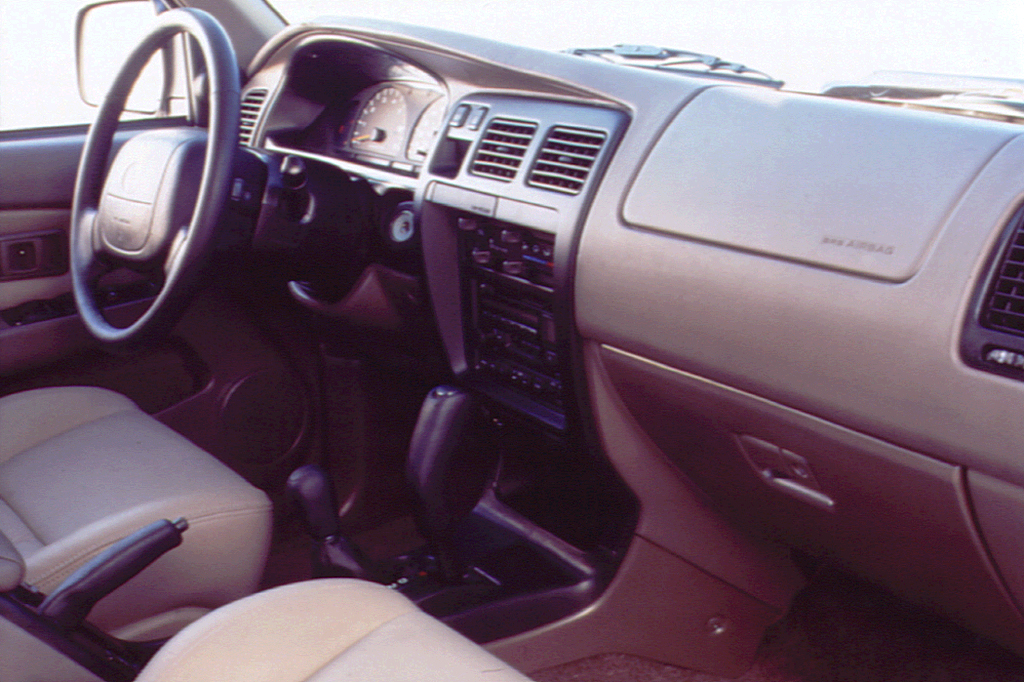 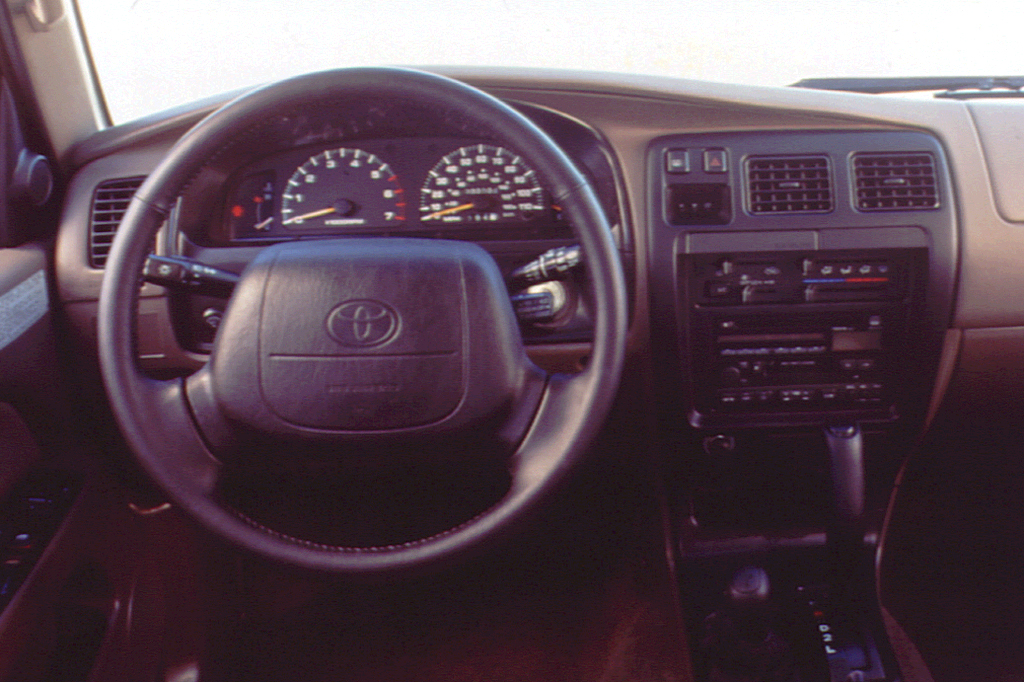 Domestic rivals such as the Ford Explorer, Chevrolet Blazer, and Jeep Grand Cherokee might be better bargains, but a 4Runner includes Toyota’s reputation for reliability.

On sale in March 1996, 4Runner shared powertrains and some chassis elements with the Tacoma pickup, but styling, wheelbase, rear suspension, and interior design differed. Dual airbags were standard, along with 4-wheel antilock brakes and side-impact door beams. Wheelbase was two inches longer, door width grew by 1.5 inches, rear leg room was up three inches, and the floor was lowered by 2.4 inches. A new one-piece rear liftgate replaced the former 2-piece tailgate, with a standard power window. The 4-door wagon came with 2- or 4-wheel drive in base, sportier SR5, and luxury 4WD Limited trim. Base engine was a 2.7-liter 4-cylinder. Standard in the Limited and optional in others was a 183-horsepower, 3.4-liter V6. A 5-speed manual gearbox was standard, 4-speed automatic optional (standard on Limited). All 4x4s except the Limited used a part-time 4WDemand system. Only Limiteds got Toyota’s electronic One-Touch Hi-4 system, with a handy button on the transfer-case lever to shift between 2WD and 4WD High range.

Either a 2.7-liter 4-cylinder dual-overhead-cam engine or a 3.4-liter V6, also with dual overhead camshafts, might be installed in a 4Runner. The 4-cylinder engine got some improvements for 1997, but power and torque ratings stayed the same at 150 horsepower and 177 pound-feet. The V6 engine developed 183 horsepower and 217 pound-feet of torque. Limited models came only with a 4-speed automatic transmission, but others had a standard 5 speed manual gearbox, with automatic as an option. 4-cylinder models and manual transmission were unavailable in 2001.

Because this version weighs less and also comes with stronger engines, it can charge up hills that would have overtaxed the old 4Runner. On-road performance is therefore more relaxed, especially when towing a trailer or hauling a full load of people and cargo. Acceleration with the smooth V6 is indeed snappy in town, though highway passing is more ordinary. We recommend a V6, because the 4-cylinder engine, despite being enlarged, still lacks the torque to propel such a heavy vehicle. Later models with the dealer-installed supercharger accelerate with authority–moving to the head of the midsize sport-utility class–aren’t overly noisy, and don’t consume much more fuel.

Solid-feeling on rough pavement, a 4Runner copes admirably when it encounters off-road terrain. Engine and tire noise are less noticeable than they used to be. The current suspension promises a comfortable ride on almost any surface. Steering is carlike and precise, delivering stable cornering.

Running boards on the Limited are a virtual necessity when climbing aboard, due to the uncomfortably high step-in level. Once inside, space is ample for four adults, and not bad at all for a fifth. Cargo room is generous, even with the rear seat in use, helped by a spare tire that’s mounted beneath the cargo floor. The 4Runner’s power liftgate window is a convenience that’s not offered by any other compact sport utility.