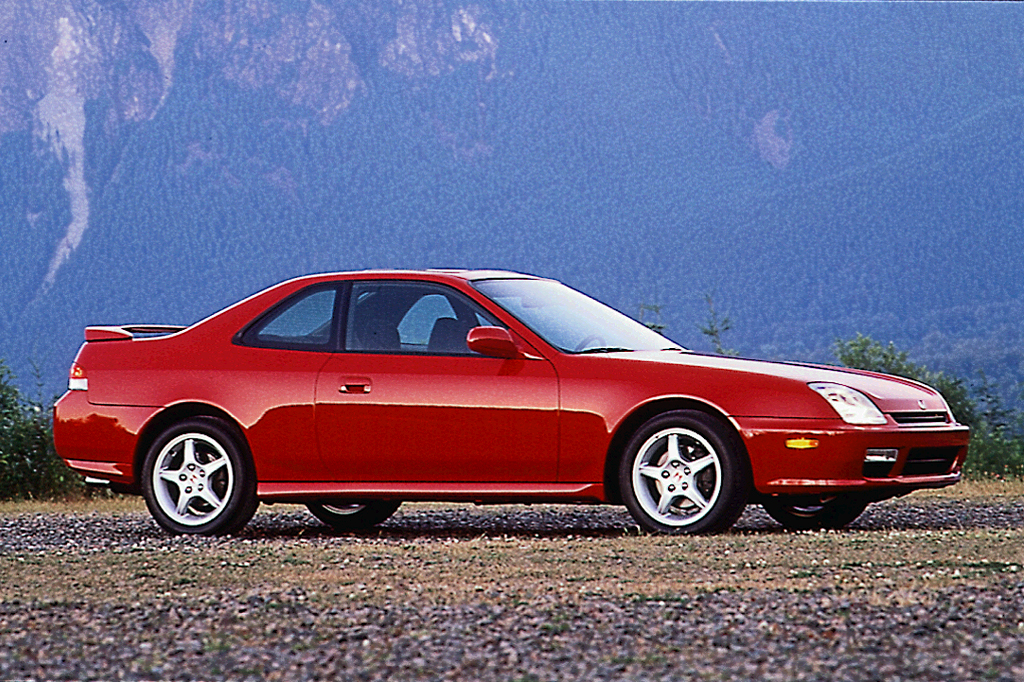 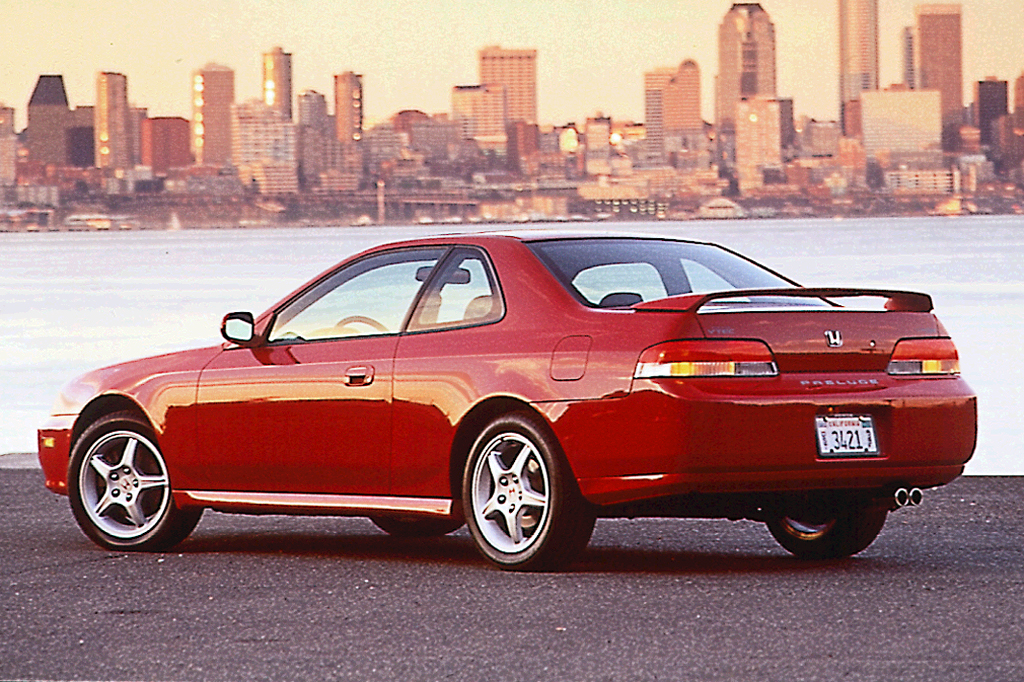 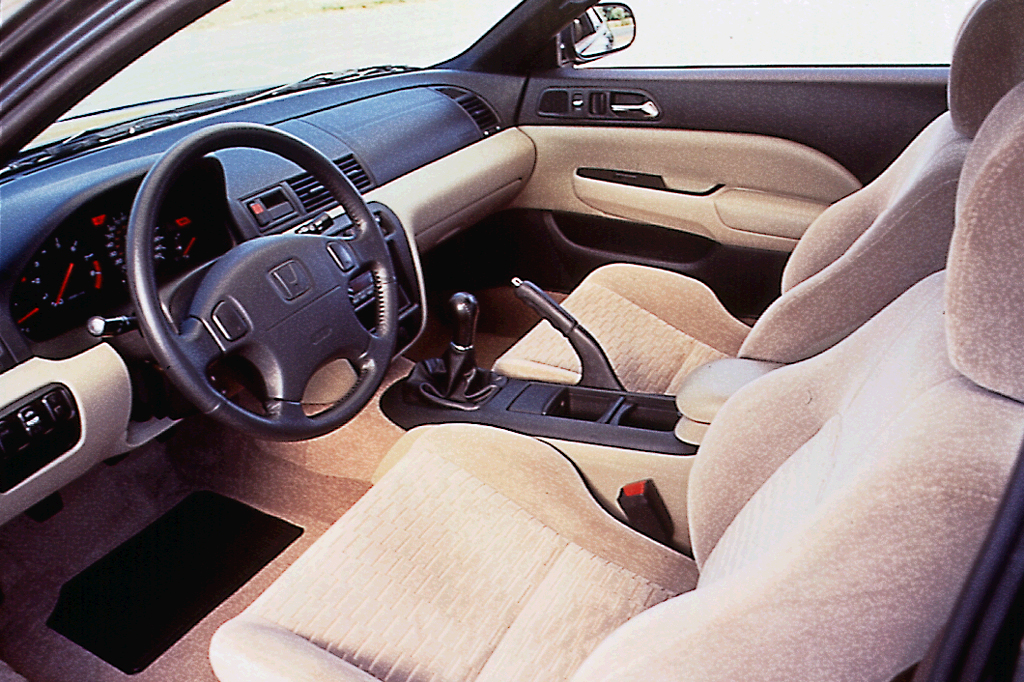 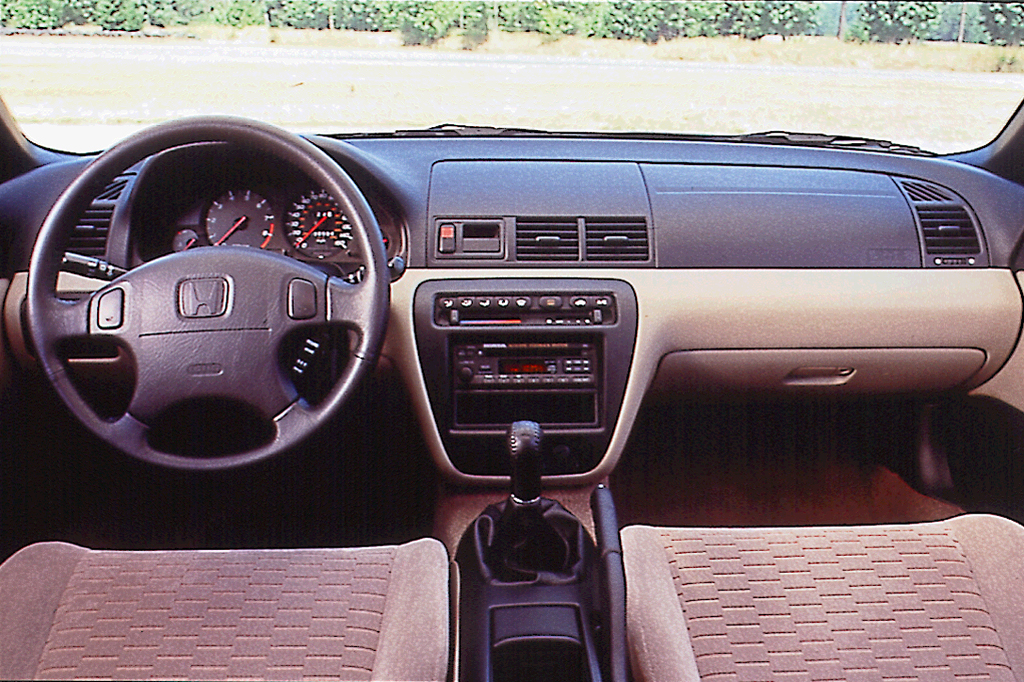 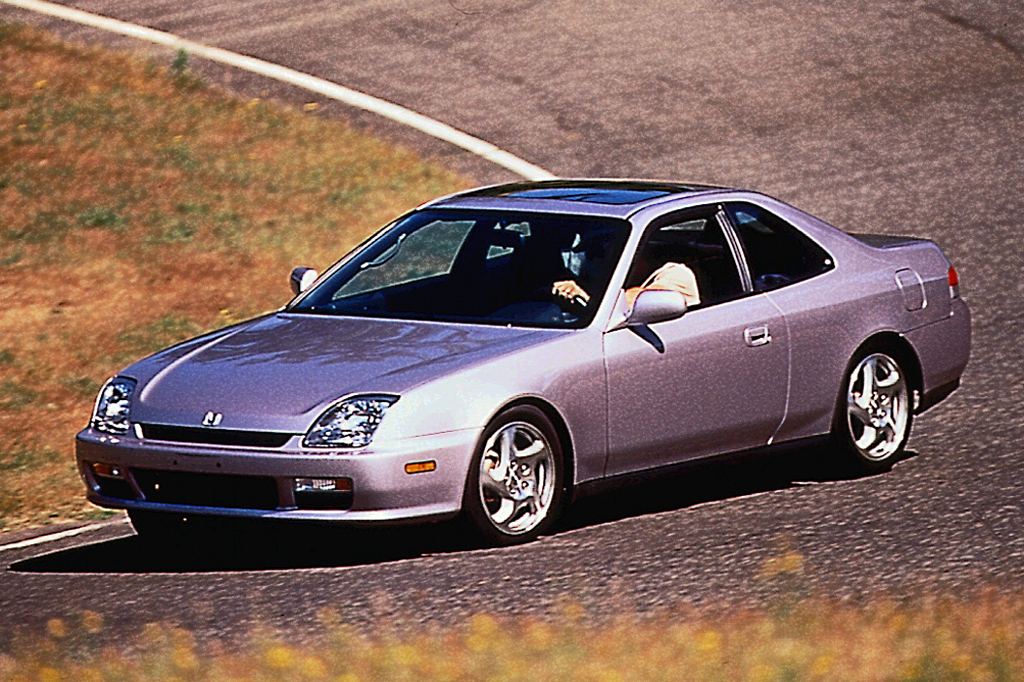 New styling gave this Prelude an airier cabin than before, and the base model has been better equipped than its predecessor. Workmanship is pleasing, but the interior decor is closer to economy-car basic than to suave sports machine. Still, energetic performance on the road can help make a Prelude appealing.

Honda redesigned its sport coupe for 1997. Again front-wheel drive with a 4-cylinder engine, Prelude rode a 1.4-inch longer wheelbase than before, and measured 3.2 inches longer overall. Curb weight rose by 145 pounds. Interior dimensions changed only slightly, but trunk space expanded by nearly one cubic foot. Basic 2-door notchback styling continued from the 1992-96 generation, but traditional analog gauges replaced vacuum-fluorescent instruments. Only base and SH editions went on sale, each equipped with a 2.2-liter 4-cylinder that employed Honda’s variable-valve-timing technology. Running on premium fuel, the engine developed 195 horsepower with 5-speed manual shift, but only 190 horses when equipped with an automatic transmission. Offered only on base Preludes, the automatic transmission gained a new manual-shift feature, called Sequential SportShift. The gear selector lever could be left in Drive for regular automatic shifting, or tipped forward or backward to permit manual gear selection.The SH model went on sale first, equipped with a new Honda-developed system designed to combat the tendency of front-drive cars to plow, or understeer, when accelerating through a turn. Called the Active Torque Transfer System, it automatically distributed more of the engine’s power to outside front wheels when accelerating in a turn. That forced the outside front wheel to rotate up to 15 percent faster than the inside front wheel. The system could direct up to 80 percent of engine torque to a single wheel. Dual airbags and four-wheel disc brakes were standard on both models, incorporating antilocking. Each model rode 16-inch tires.

A dual-overhead-cam 2.2-liter 4-cylinder engine went under all Prelude hoods, producing 195 horsepower (190 with automatic). The horsepower rating later grew to 200. Base Preludes could have either a 5-speed manual transmission or 4-speed SportShift automatic, but only manual shift went into the SH model.

This Prelude rides more softly and muffles the VTEC engine better than the old one did, so it doesn’t feel–or sound–as sporty this time around. On the other hand, the new Prelude drives more securely through turns and over lumpy surfaces. There’s also a satisfying exhaust note when the engine revs high–which it definitely likes to do. The ride is reasonably supple for a sports coupe, though uneven surfaces induce notable jiggle. Engine, wind, and road noise are low while cruising, but “tire slap” might be heard even in around-town driving.

Acceleration is lively with either transmission. Our test Preludes accelerated from 0-60 mph in 8.5 seconds with SportShift, and a swifter-yet 7.6 seconds with the 5-speed manual gearbox in an SH. While the you-do-it SportShift gear changes are crisp and immediate, high-rpm downshifts usually occur with a jerky lunge. On the plus side, SportShift’s manual-shift capability gives the driver helpful control over engine speeds. Prelude’s 5-speed is a slick-shifting, sheer delight, mating masterfully to smooth and easy clutch action. An SH averaged only 19.4 mpg, though a base car with automatic got a more appealing 23.2 mpg. Premium fuel is mandatory either way.

The current Prelude is not usefully bigger in size. A longer wheelbase adds some rear foot room, but no more functional backseat space than in prior Preludes. Therefore, the rear seat is again best used to carry children or parcels–though it’s no worse than most rivals. Visibility is uncluttered all around. The new dashboard features simple, logically grouped analog gauges.