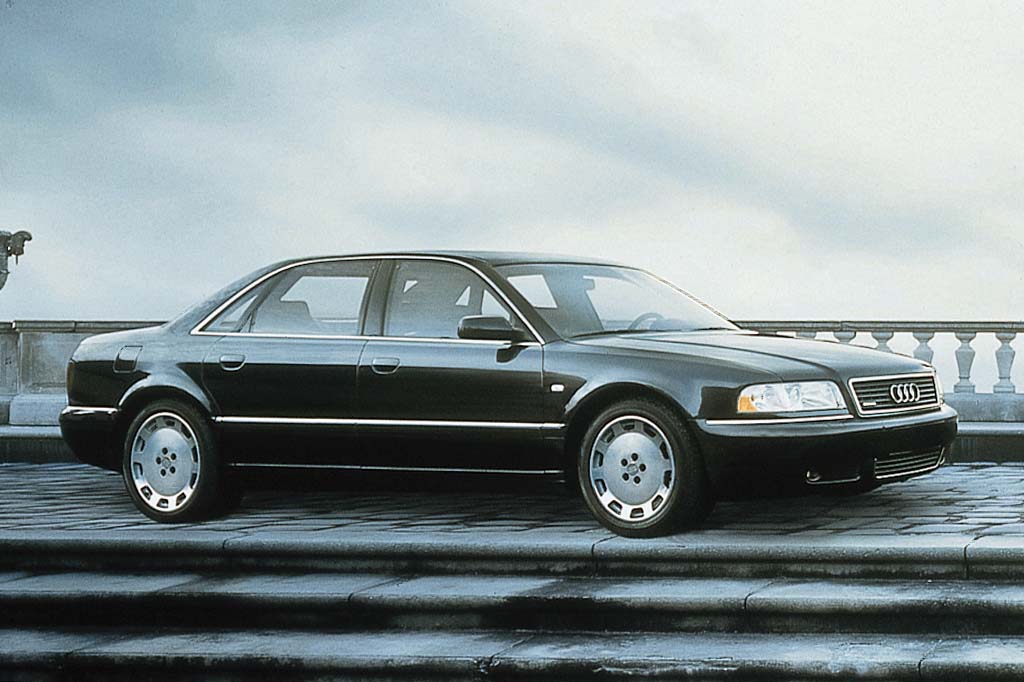 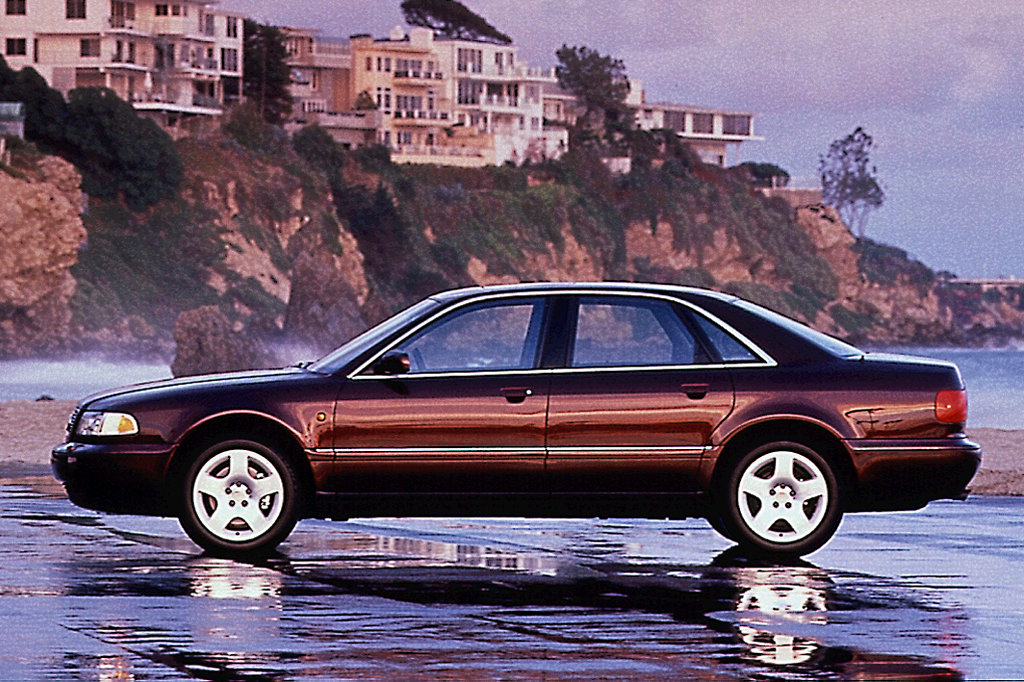 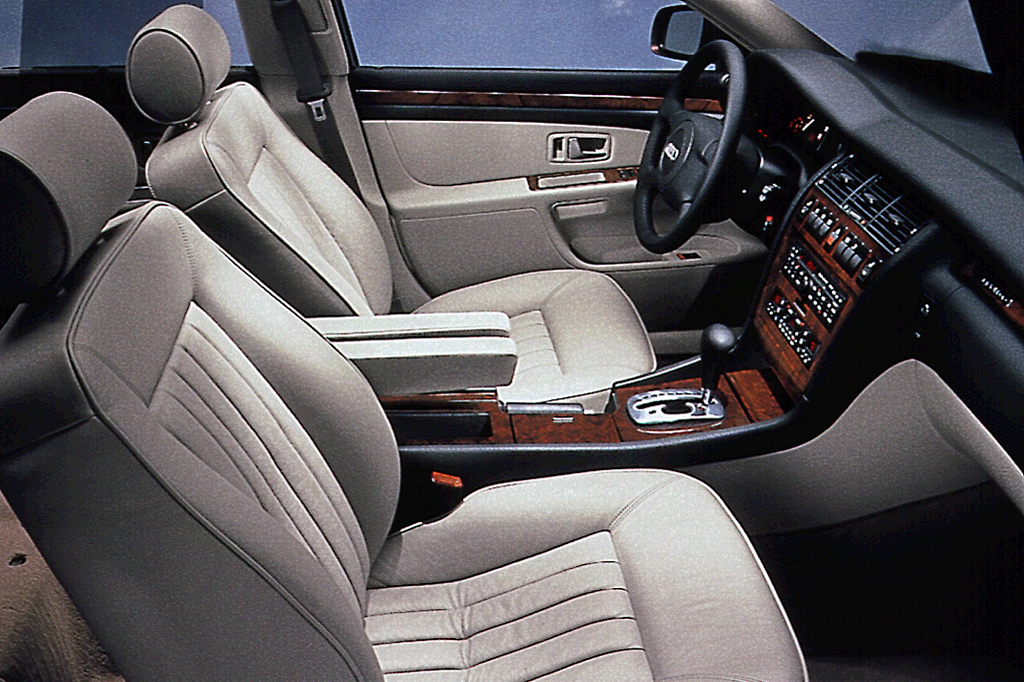 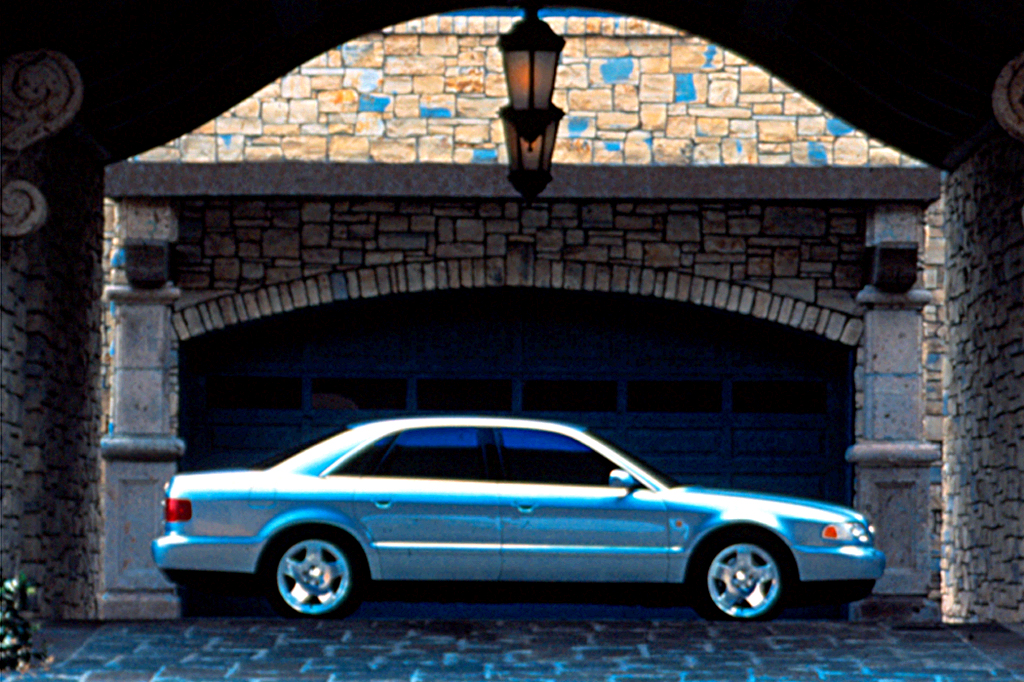 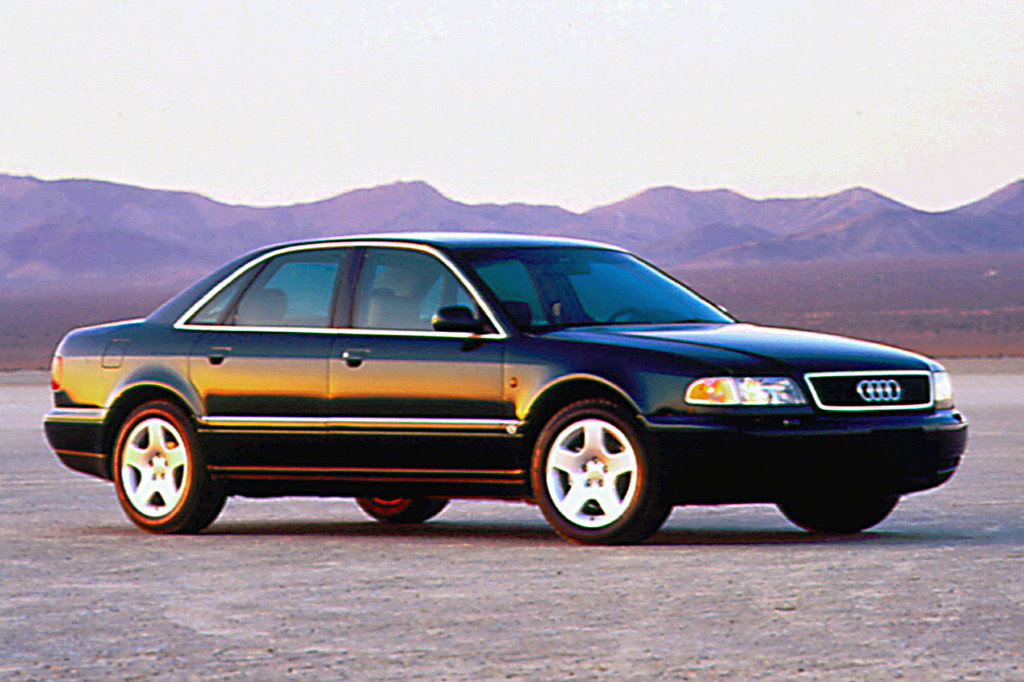 We like the A8, but cannot quite recommend it. Why? Simply because it’s been overpriced for what you get, and secondhand prices continue on the high side. Audi’s Quattro is the only all-wheel-drive system in this car’s class, but most people don’t really need it. Other brands give better value, even if they’re less high-tech than an Audi.

Audi’s luxury flagship slides into the dimensional gap between a BMW 7-Series and the smaller Mercedes-Benz E-Class. Use of aluminum for most frame and body panels, however, means the A8 weighs 300 to 500 pounds less than comparable luxury sedans. As its numerical designation suggests, a 3.7-liter aluminum V8 engine powered the A8 3.7 sedan, which came with front-wheel drive and standard traction control. A 300-horsepower, 4.2-liter V8 went into the A8 4.2, along with Audi’s permanently engaged Quattro all-wheel-drive system. Quattro automatically sends power to the wheels with the most traction in slippery conditions. Both models were equipped with six airbags: dual cushions in front, plus smaller airbags in each of the four doors. Rear side airbags were claimed to be an industry “first.” Standard equipment also included antilock braking, an antitheft system, and 5-speed automatic transmission. Each A8 sedan also got a power tilt/telescoping steering wheel, power sunroof, cruise control, keyless entry, leather upholstery, and wood interior trim.Three option packages were available. The Cold Weather group featured heated steering wheel and front/rear seats, plus a ski sack. The Warm Weather option included insulated glass and sunshades for the back window and rear side windows. A solar sunroof in that group included interior fans that engaged when the car was parked in the sun. Rivals included the BMW 7-Series, Lexus LS 400, and Mercedes-Benz E-Class.

Two engines have been used in the A8. Both are dual overhead-cam V8s. The 3.7-liter V8 was installed in the A8 3.7, developing 230 horsepower. That model came only with front-wheel drive and traction control. A 300-horsepower, 4.2-liter V8 went into the A8 4.2, which came with Quattro all-wheel drive. A 5-speed automatic transmission was standard in 1997. A year later, a Porsche-designed Tiptronic unit, capable of manual gear selection, ousted the conventional automatic. The 3.7-liter engine disappeared after 1999, and the 4.2-liter V8 gained 10 horsepower in 2000. In 2001, the 3.7-liter V8 was replaced by a 4.2-liter with 360 horsepower.

Despite its aluminum structure, the A8 is no lightweight. Even so, it performs with vigor. An early A8 3.7 accelerated to 60 mph in just under 8 seconds, in our testing. That’s quick, yet somewhat slower than the class norm. Audi initially claimed 6.9 seconds for the A8 4.2, which seems a tad optimistic considering the added weight of the all-wheel-drive components. But the later A8L clocked 7.1 sec 0-60 mph, while the high-performance S8 needed just 6.4 sec. Gas mileage isn’t great, but could be worse. An A8 3.7 managed 18 mpg in hard city and freeway driving, while an A8 4.2 yielded just over 18 in more gentle running.

Both models offer polished road behavior. Though adroit, handling falls just short of the BMW-sporty realm. It’s sporty, true, but cornering is grippy and predictable–roughly like that of the largest Mercedes. The A8 feels far better planted at high speeds than a Lexus LS 400. All-wheel drive in the A8 4.2 is terrific, and an exclusive among the model’s direct competitors. Wind and engine noise are Lexus-low, but mild tire drone occurs over coarse pavement. Ride quality is excellent: supple, composed, and well-controlled. The A8 irons out rough spots as well as its German rivals, and with better body control than a Lexus. “Panic” braking is short and undramatic, though pedal action is somewhat doughy–not quite as firm as we’d like.

As expected in view of the price, an A8 packs all the amenities that would be expected in a top-drawer automobile. If it happens to have Cold Weather, Warm Weather, and Convenience Packages, it ranks virtually as a limousine. The A8 does not quite match the biggest Mercedes-Benz and BMW models for rear passenger room, but head clearance is adequate for 6-footers. Leg room borders on generous, and there’s enough width for three medium-size adults out back. All seats are firm and supportive, but front buckets let occupants slide around somewhat during hard turns. Audi’s dashboard has more buttons and switches than most luxury cars. Low-set climate controls are especially tricky to operate while driving. Visibility is constrained over-the-shoulder because of the roof styling, but good otherwise. Cargo space is ample, with a low liftover for easy loading. Due to bulky side panels, however, the trunk is rather narrow. Fortunately, the interior provides plenty of small-item stowage, though the dashboard glovebox is not as big as it appears at a glance.

Part of the extra new-vehicle cost comes from the fact that aluminum demands more hand labor than steel. Audi claims that aluminum adds strength while saving weight. Perhaps bearing out that assertion, the A8 does feel rock-solid on most any surface. Paint, interior materials, and detail fit/finish have been great on test cars we’ve tried. That should be a given, considering the car’s price–whether new or used.