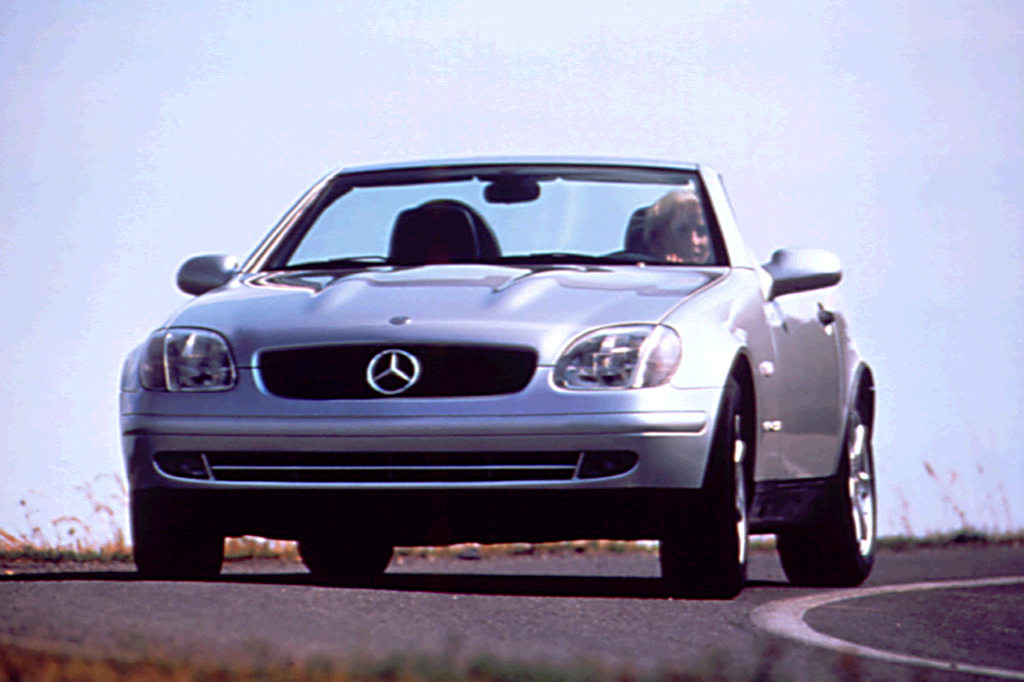 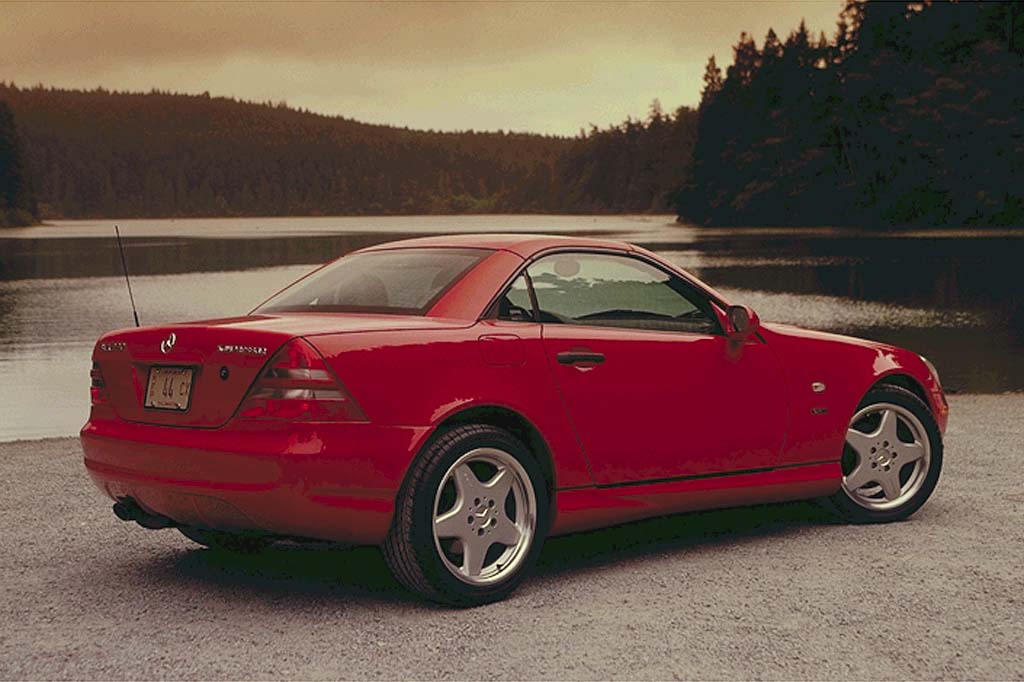 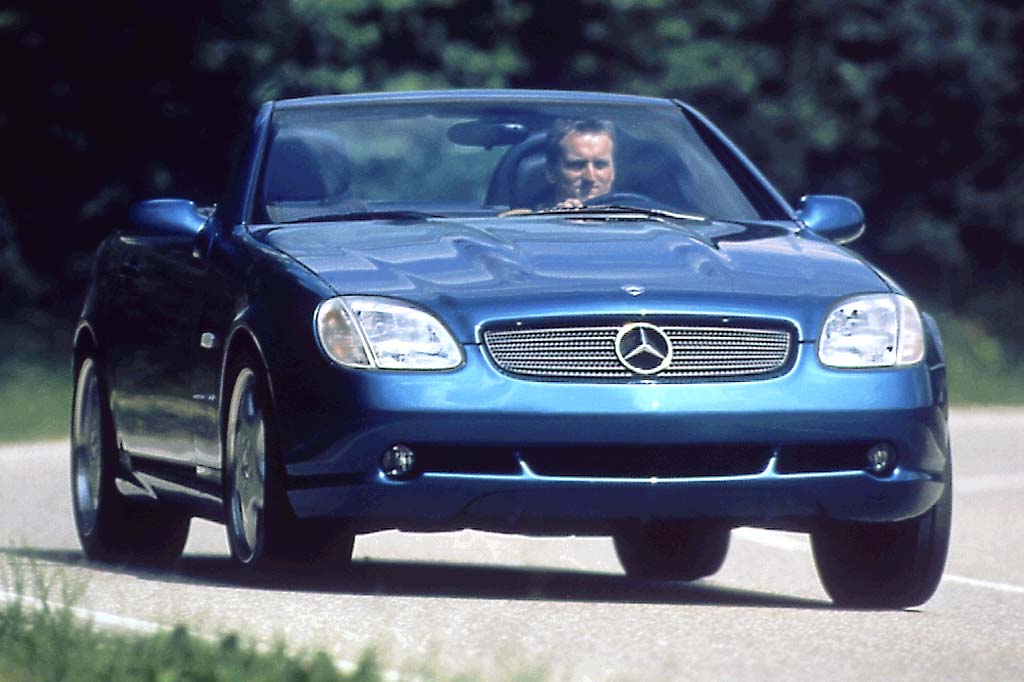 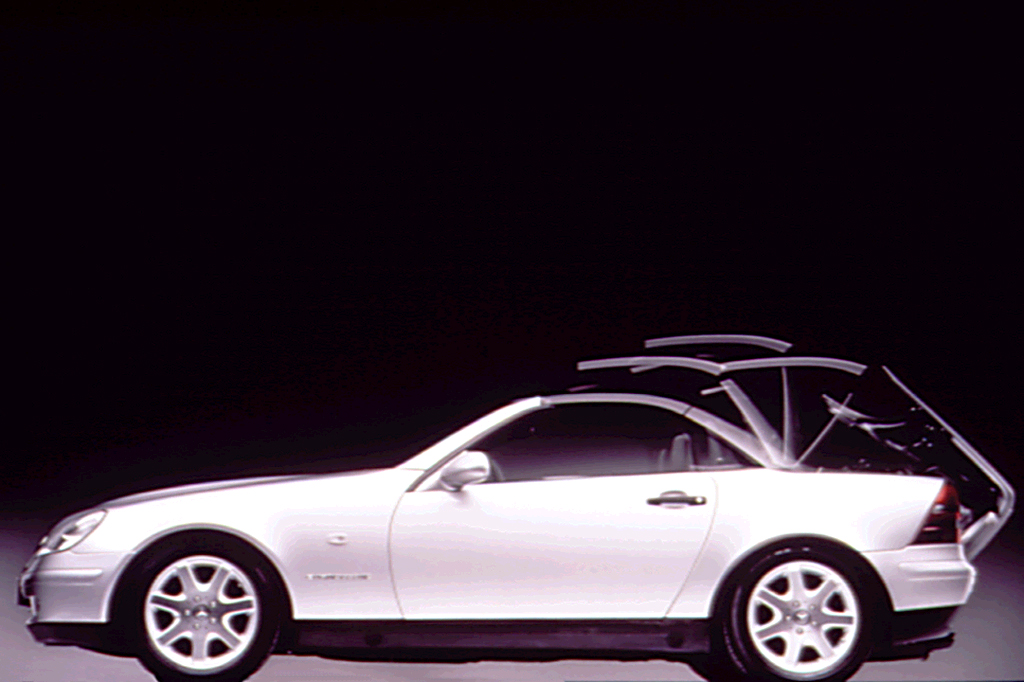 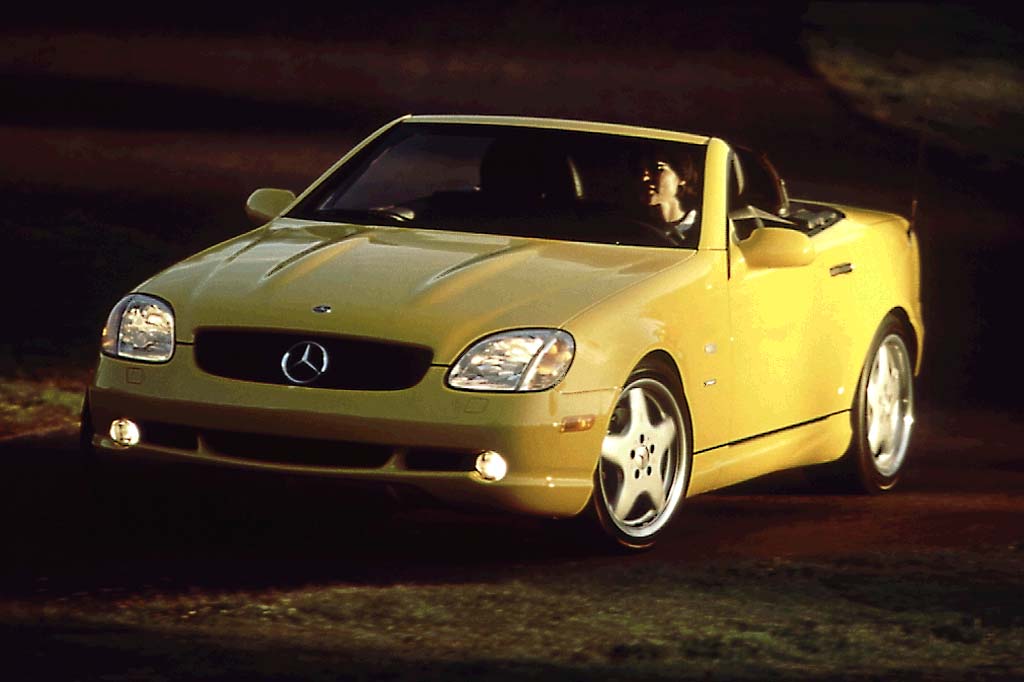 Early buyers had to put their names on a waiting list, due to the SLK’s popularity. Mercedes’ coupe/roadster isn’t cheap, but there’s nothing else quite like the SLK on any road.

Mercedes-Benz had something different on tap for 1998: a 2-passenger sports car with a supercharged 2.3-liter 4-cylinder engine. Instead of a soft top, however, the SLK230 had a metal roof that powered down into the trunk for stowage, at the touch of a button. The trunklid opened forward for cargo, and tilted from the rear to raise or lower the top–a task that took about 25 seconds. This was Mercedes’s answer to the “retro roadster” craze that began with the Mazda Miata and was later picked up by the BMW Z3 and Porsche Boxster. In German, SLK stands for sporty, light, and compact. Surprisingly, design work on the SLK stemmed from the compact C-Class sedan. A “Kompressor” badge on the front fenders indicated the presence of the supercharged engine. Only a 5-speed automatic transmission was offered. Standard features included door-mounted side airbags, antilock brakes, and traction control. A “BabySmart” feature automatically deactivated the right-side airbags when a special Mercedes child seat was installed. Rivals included the BMW Z3, Chevrolet Corvette, and Porsche Boxster.

Acceleration off the line is a bit leisurely, but speed gathers quickly once the supercharger hits full puff, at about 3000 rpm. Test manual SLK320 ran 0-60 mph in brisk 7.4 sec. The SLK230 takes 8.4 and can feel sleepy, though it goes well once its supercharger starts delivering. Midrange power is strong and satisfying, but in some situations, you get a lag between flooring the throttle and feeling extra thrust–a delay that can be frustrating in city driving. The automatic transmission furnishes the right gear for most occasions, and smooth, generally prompt shift action. It also helps fuel economy. We averaged nearly 24 mpg in fast highway driving. Expect 17-18 mpg in city/suburban driving with a light right foot.

Despite having a long first-to-second shift “throw” and a rubbery feel, the manual gearbox made available in 1999 gives the SLK stronger sports-car credibility. Even if that 5-speed does not shift as crisply as some, it does make the car feel more sporty.

Though smooth for a four, the engine emits an unbecoming, coarse growl when worked hard. Exhaust sound is audible too, but things settle down to a low hum at cruising speeds. Wind noise is modest, with the top and windows raised. Road rumble is prominent, except on glassy asphalt–a penalty of the car’s aggressive tires. Those tires also make for a thumpy roar over expansion joints and broken pavement, but big ruts and bumps are smothered quite well.

Entry/exit is tricky, with the low-slung build. The driving position is snug. Even so, 6-footers won’t complain in either seat, both of which are firm and comfortable for long drives. Gauges are “retro” stylish, informative, and very readable. Controls are conveniently laid out, but we’ve been dismayed by door windows that don’t quite lower all the way, leaving a half-inch ridge of glass. The hardtop lowers in a trice, but cuts trunk space by two-thirds, to little more than three cubic feet below a pull-out vinyl cover. That cover must be deployed to operate the top, because it’s actually a safety switch to prevent the roof from accidentally crushing luggage. Top up, the trunk’s 9.5 cubic feet will carry soft baggage for two on a long weekend, but the space is very oddly shaped.

Some minor body tremors may be noticed with the top down, but only on very rough roads. Too bad the dashboard’s pop-out cupholder is so rickety, and the radio reception can be surprisingly mediocre.