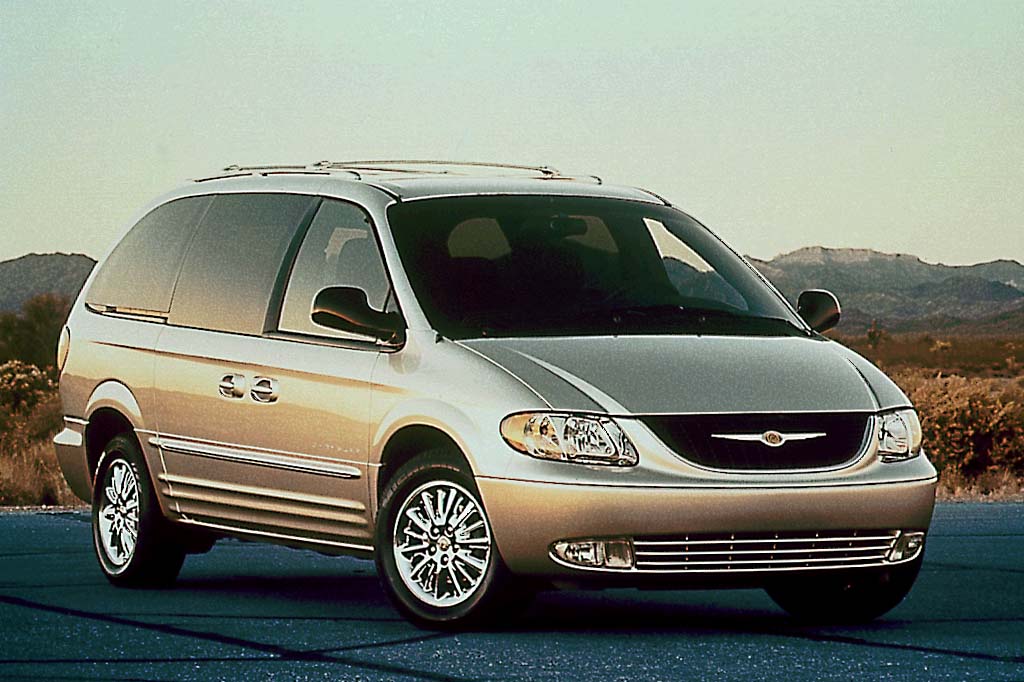 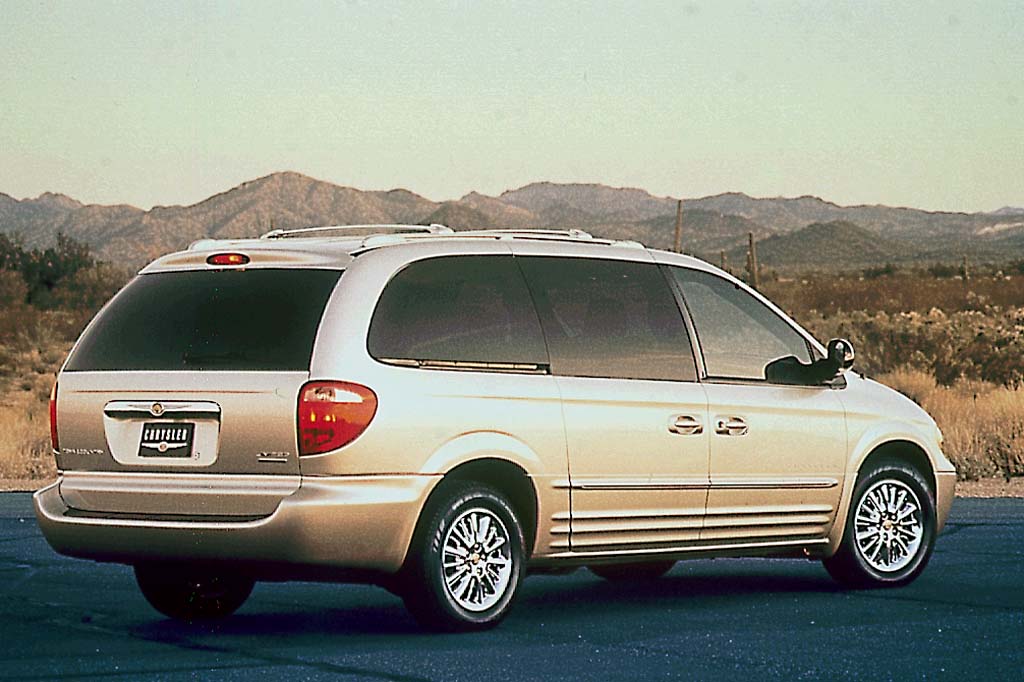 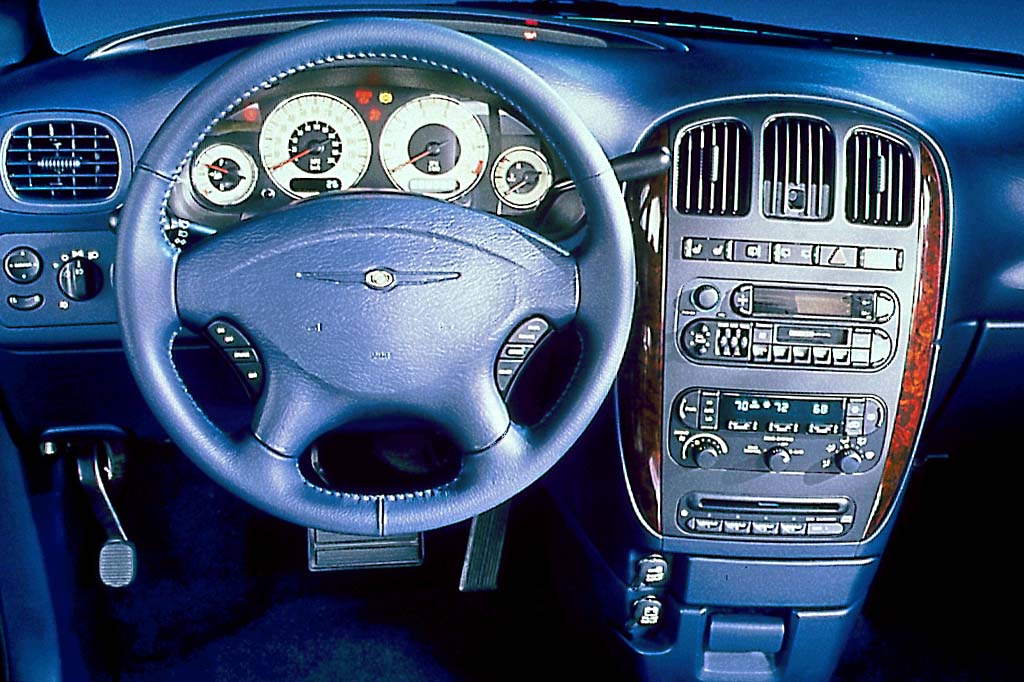 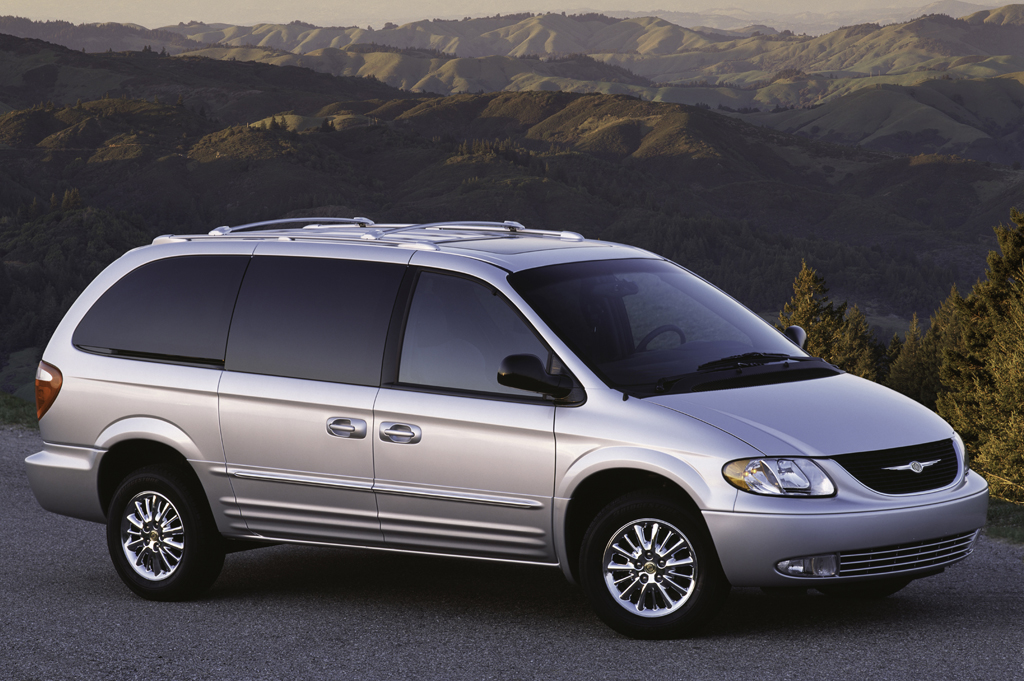 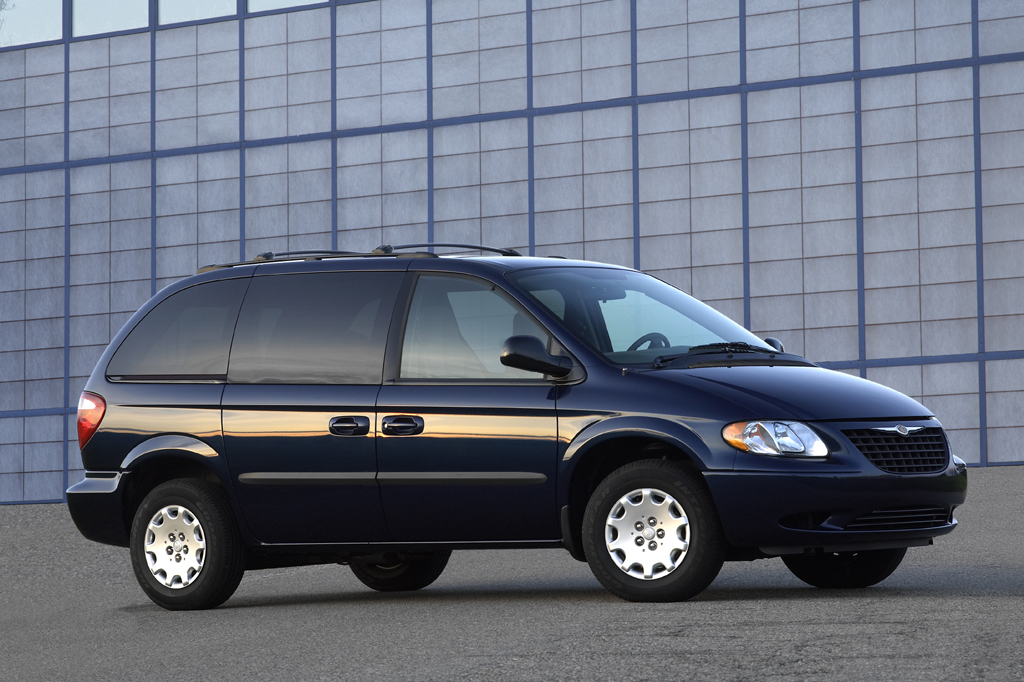 DaimlerChrysler’s lineup dominates the “shoulders” of the minivan market. By 2002, their minivans accounted for 62 percent of sales under $20,000 and 37 percent of those over $30,000. Such figures demonstrate the appeal of both the entry-level Voyager and the luxury Town & Country, which, bolstered by the 2001 redesign, are now stronger values than ever.

Fresh styling, more powerful engines and some minivan “firsts” (including a power liftgate) highlighted the redesigned Town & Country. Wheelbases were unchanged from the previous year, but the Town & Country rode only the longer (119.3-inch) wheelbase, while the Chrysler Voyager (listed separately) went on a 113.3-inch span.

As in the past, the Dodge Caravan shared this design and most mechanical features. Caravans also were redesigned for 2001, in both regular- and extended-length models.

A 3.3-liter V6 was standard in the LX and LXi, now rated at 180 horsepower (previously 158). Limited and AWD models got a 3.8-liter V6, which was optional for LXi; it rose from 180 to 215 horsepower. Both engines mated with a four-speed automatic transmission. Antilock brakes were standard.

New wraparound taillamps, 50-percent larger headlights, and lower body cladding on the Town & Country LXi and Limited were among the styling changes. These minivans were about 2 inches wider than the 1996-2000 models.

All models seat seven and have two sliding side doors, with power operation for one or both side doors available. Alterations inside included new dashboards, and a center console with an internal power outlet. The console could be mounted between the front or second-row seats.

A newly available rear parcel shelf could be fixed at floor or midlevel positions, and included pop-up storage dividers. Dashboard airbags gained dual-stage inflators. Front side airbags (a first for these vans) were standard on the Limited and optional for other Town & Country models.

A rear-seat entertainment system with 6.4-inch LCD screen, VCR, and wireless headphones, was a dealer-installed option, as was a navigation system. An available in-dash four-disc CD player also was new.

A manual override for the available power sliding side doors permitted them to be opened or closed by hand during the powered phase. A right-side power door was optional for the Town & Country LX, while power operation for both sides was standard on LX and Limited models. The new power liftgate was controlled by the keyfob or interior switches, and had sensors designed to stop its movement if it encountered an obstruction. The power liftgate was standard on the Limited and optional on other models.

Unlike the Honda Odyssey and Mazda MPV, the third-row bench seat does not fold away into the floor, but Chrysler did offer a new 50-50 split third-row bench; each portion weighs 55 pounds and removes individually, and can also recline or fold flat. Rivals included the Chevrolet Venture, Honda Odyssey, and Toyota Sienna.

SUV-intenders would do well to consider an AWD Town & Country as a sensible, comfortable alternative. Riding about as comfortably as a full-size car, a spacious Town & Country absorbs bumps better than any SUV, and beats most minivans (Voyager included).

Bigger wheels and tires give the Town & Country an edge over Voyager in handling and roadholding, too, though both are carlike and friendly to drive. The Town & Country brakes with more authority than a Voyager, thanks to its standard antilock four-wheel discs.

A Town & Country requires the muscle of the 3.8-liter V6 to get off the line smartly and hold its own in highway passing and merging. Fuel economy hasn’t changed much from the prior generation. A test minivan with 3.8-liter engine averaged 15 mpg.

Abundant sound insulation makes the Town & Country one of the quietest minivans, with fine suppression of wind, road, and engine noise. Playing its luxury role to the hilt, the Town & Country features comfortably supportive and generously sized seating at all positions, and may have been fitted with leather upholstery. Driver positioning is excellent, and entry/exit easy.

Split third-row seats remove easily, but unlike stowable alternatives, you must decide whether to take them out before you begin a trip. The power side doors’ manual-override function is convenient, while the power liftgate (shared with Grand Caravan) is a useful innovation. Both systems stop and reverse direction quickly when encountering an obstruction, the liftgate’s sensors proving particularly sensitive.

The available movable, lighted center console, if installed, enhances versatility. So does the multiposition rear parcel shelf, though we question the durability of its plastic pop-up dividers. The revamped dashboard moved controls closer to the driver, but front cupholders block access to the in-dash CD changer.

With no provision for an integrated navigation system, the add-on screen mounts atop the dashboard. A unique “three-zone” climate-system option allows for independent control of driver, front-passenger, and rear-seating settings.