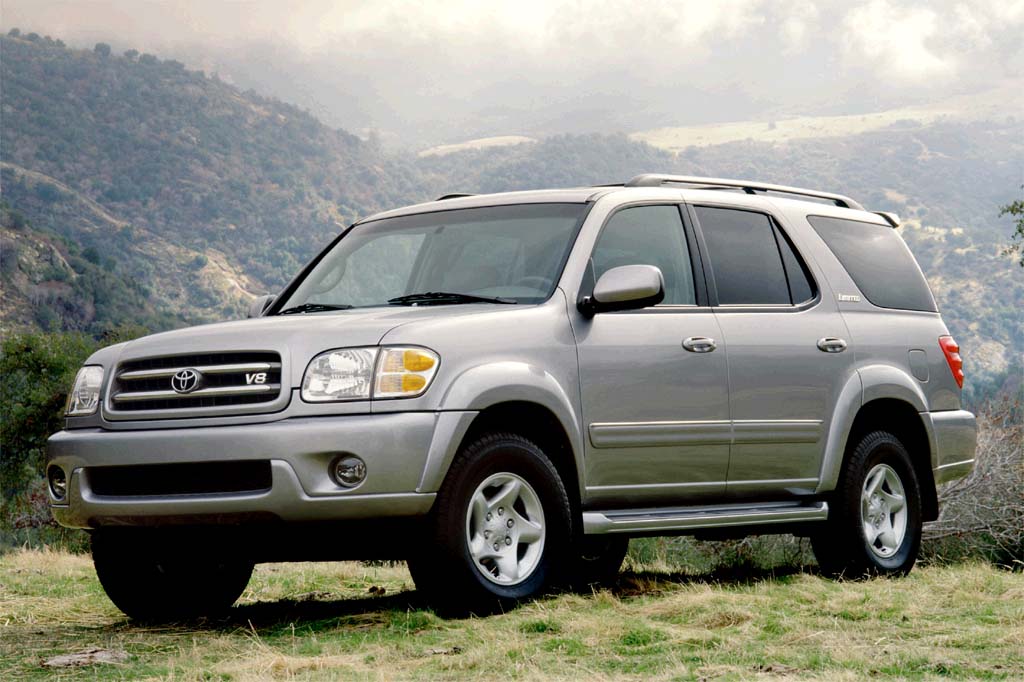 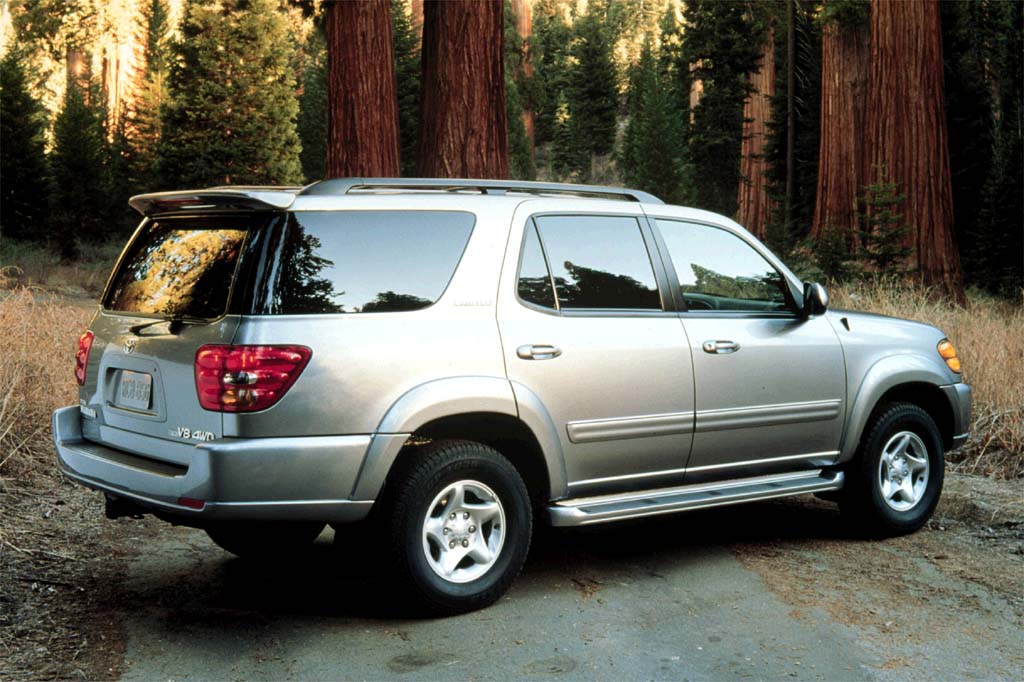 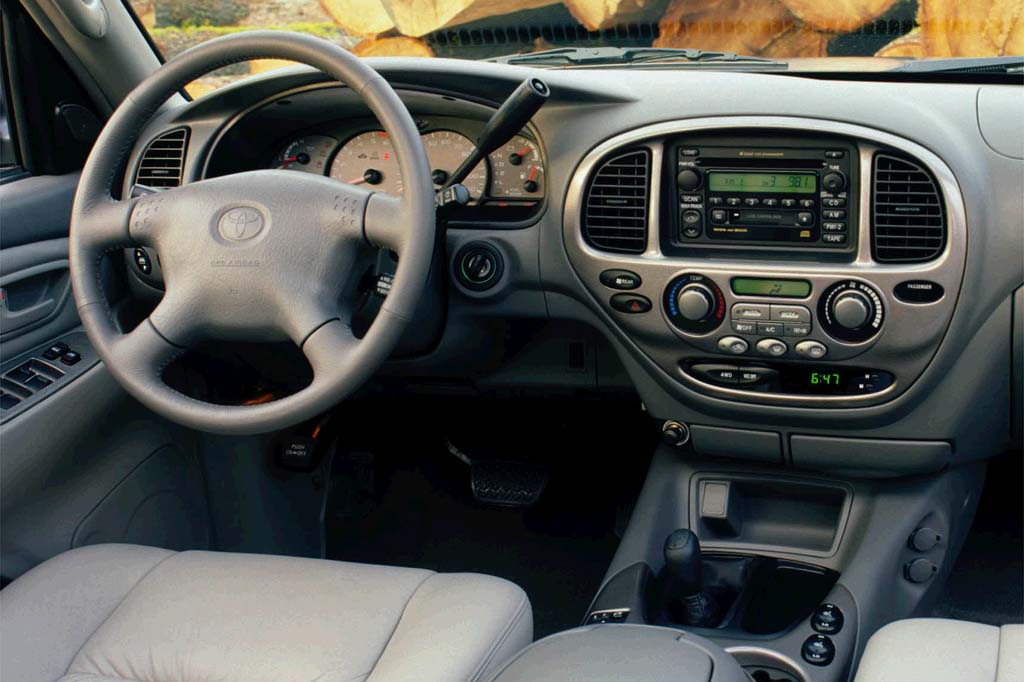 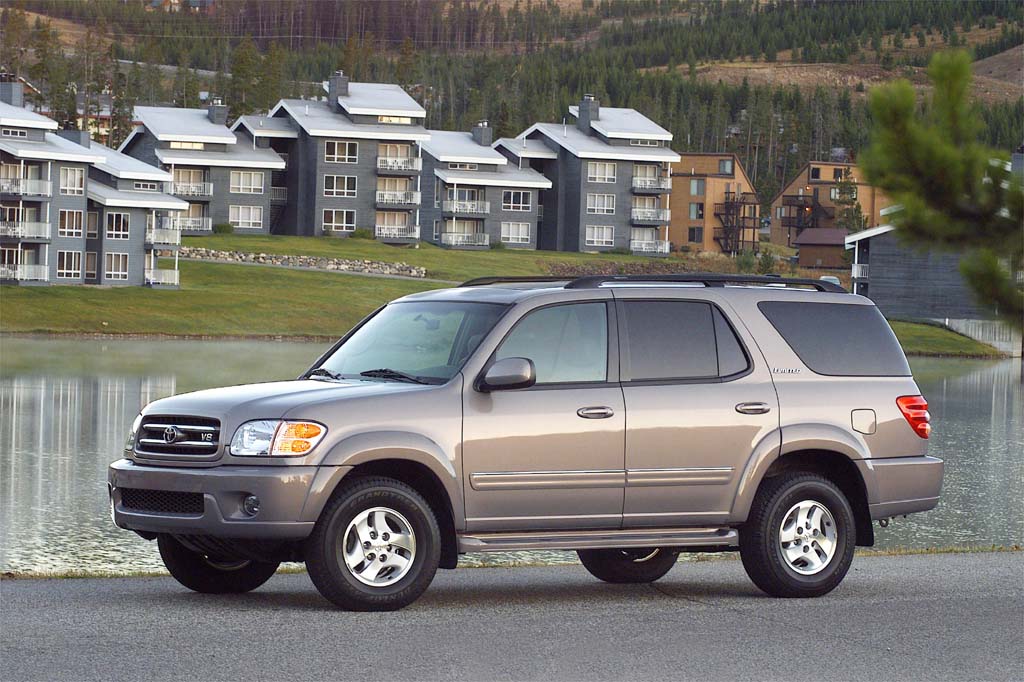 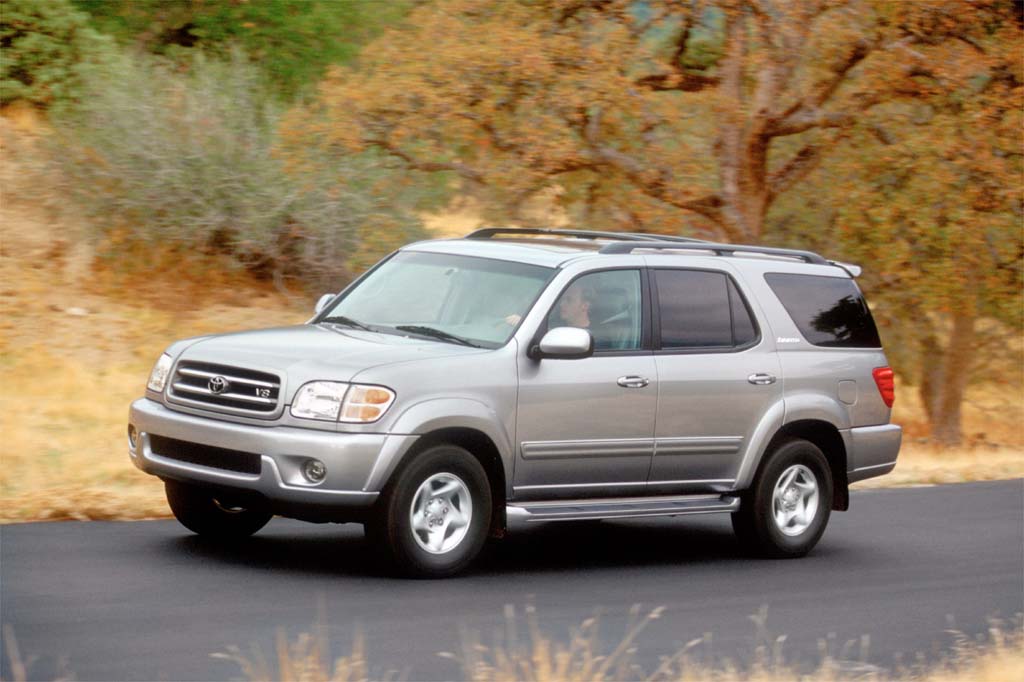 Sequoia suffers from all the usual big-SUV vices, but is nonetheless a strong competitor that merits serious consideration as a refined, well-equipped Toyota. Still, rivals match it in many ways while typically towing more than Sequoia’s 6500-pound maximum. They may also be cheaper.

Joining the familiar and long-lived Land Cruiser, Toyota added a second full-size, four-wheel-drive sport-utility vehicle for 2001. Built at the same Indiana plant as the Tundra full-size pickup, the Sequoia was a spinoff of that truck. The four door wagon rivaled the Ford Expedition for bulk, and was the largest vehicle ever offered in the U.S. by a Japanese manufacturer.

Sole engine was the Tundra’s 4.7-liter V8, here rated at 240 horsepower and linked to an automatic transmission. Rear-wheel-drive and four-wheel-drive models were offered, in SR5 and upscale Limited trim. The 4WD system had to be disengaged on dry pavement, but included low-range gearing. A dashboard switch allowed shifting between 2WD and 4WD-High.

Traction control was standard on both versions. Toyota’s Vehicle Stability Control antiskid system was an option. The Sequoia’s independent front suspension was similar to the Tundra’s, but its rear suspension used coil instead of leaf springs for a smoother ride.

Toyota claimed that the Sequoia had 10.6 inches of ground clearance, significantly more than the Expedition or a Chevrolet Suburban. Maximum cargo volume was a claimed 128 cubic feet. All models had standard three-row seating, in a 2-3-3 format. Second-row seats were 60/40 split-folding, while a 50/50 split-folding seat went into the rear.

All eight passengers got three-point seatbelts. This was the first Toyota truck with window-curtain side airbags, standard for all models.

Only one powertrain has been available in Sequoias; a 4.7-liter dual-overhead-cam V-8 engine that produces 240 horsepower and 315 pound-feet of torque, driving a four-speed automatic transmission. For 2005, Sequoia gets a 4.7-liter V8 with 282 hp, a gain of 42 hp over 2004. A 5-speed automatic is the sole transmission and replaces a 4-speed for ’05.

Climbing aboard a Sequoia, its bigness is immediately evident, reflected in performance and fuel economy. A 4WD Limited accelerated to 60 mph in a class-competitive 9.5 seconds, but high weight blunts midrange passing ability. The silky V8 is well-matched by a smooth, responsive transmission.

With rear-drive, an SR5 averaged 14.3 mpg, while 4WD Limiteds averaged 10.4 to 13.3 mpg in city/suburban commuting. Those are realistic numbers in the long term, though another 4WD Limited returned 15.9 mpg with more highway miles. Toyota recommends regular-grade fuel.

The Sequoia’s long wheelbase helps deliver a generally flat and easy ride, and the suspension copes well with rough patches. But small imperfections sometime register with surprising clarity through the seats. You can also expect marked jiggle on washboard freeway surfaces.

Handling is typical big-truck. A Sequoia is stable enough in hard cornering, despite body lean. Sequoias are a chore to maneuver on twisty roads. Parallel parking is no pleasure, hampered by a large turning radius. Simulated emergency stops are short and true, but brake-pedal action is spongy.

One of the most refined big truck-based SUVs, the Sequoia exhibits little engine noise, subdued tire thrum even on fairly coarse concrete, and only modest wind rush (for a blocky wagon).

Instruments and controls are simple, large, handy, and clearly labeled. The wide cabin puts centrally located climate and audio controls a fair reach away from the driver, and the foot-pedal parking brake is no bonus. Interior decor is not fancy, but materials and workmanship are pleasing.

Because the cabin isn’t all that tall, front head clearance is only adequate for six-footers, but leg room is bountiful. Comfortable seats have long cushions. High ground clearance means some strenuous moves are needed to climb in and out, making available running boards especially helpful. Visibility is commanding to front and sides, but the rear view is poor in close quarters.

Three adults have as much space in the second row as in the front, but entry/exit is again awkward. The third row has plenty of space for a pair of preteens or toddlers, but they’ll need to crawl past the fold-forward second-row seats to get in or out.

Cargo room is not expansive behind the third seat for a vehicle this large, but plentiful with that seat folded or removed–and even more so with the middle seat stowed. The liftgate’s handy power window lowers via the remote keyfob, but raises only by using the keylock or an inside switch. The cabin has plenty of bins and pockets, as well as 10 cupholders.